Despite Gold’s Volatility in August, the 2011 Trendline is Now Support – USD Beat Down and Yellen Flip-Flops

Has Yellen had her “come to Jesus moment” with the hard data?  Definitely.

“Moreover, I expect that the evolution of the financial system in response to global economic forces, technology, and, yes, regulation will result sooner or later in the all-too-familiar risks of excessive optimism, leverage, and maturity transformation reemerging in new ways that require policy responses. We relearned this lesson through the pain inflicted by the crisis. We can never be sure that new crises will not occur, but if we keep this lesson fresh in our memories–along with the painful cost that was exacted by the recent crisis–and act accordingly, we have reason to hope that the financial system and economy will experience fewer crises and recover from any future crisis more quickly, sparing households and businesses some of the pain they endured during the crisis that struck a decade ago.” – Janet Yellen, Jackson Hole, August 2017 – Financial Stability a Decade After the Onset of the Crisis

How can anyone maintain faith in markets that are manipulated with trillions in life support over eight years?  While chewing on that, how many near-term triggers are floating?  I’m likely missing the actual trigger. 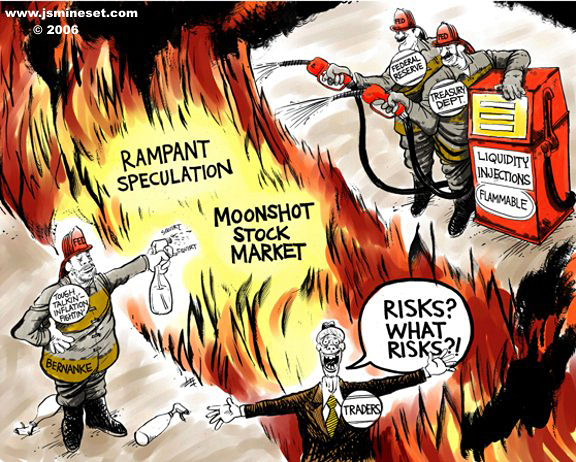 BULLISH: despite gold’s volatility in August, the 2011 Trendline has become a support area for two weeks, rather than a resistance.  That’s an important step for the price to continue to rise and meet the next challenges.  Those are the topside Trendline of the Megaphone pattern and $1,297 Fibonacci.  The price tapped $1,300 last week, but we have not had a close above and beyond to attract sidelined cash to step in.  As noted in my last few analyses, the 50/200 EMA Golden Cross on the weekly chart will likely trigger sidelined cash inflow.  The next target would be $1,320 and beyond.  If you’re new or missed some of my most recent writing on gold and analyses, you can find it here, here, here, here, and here. 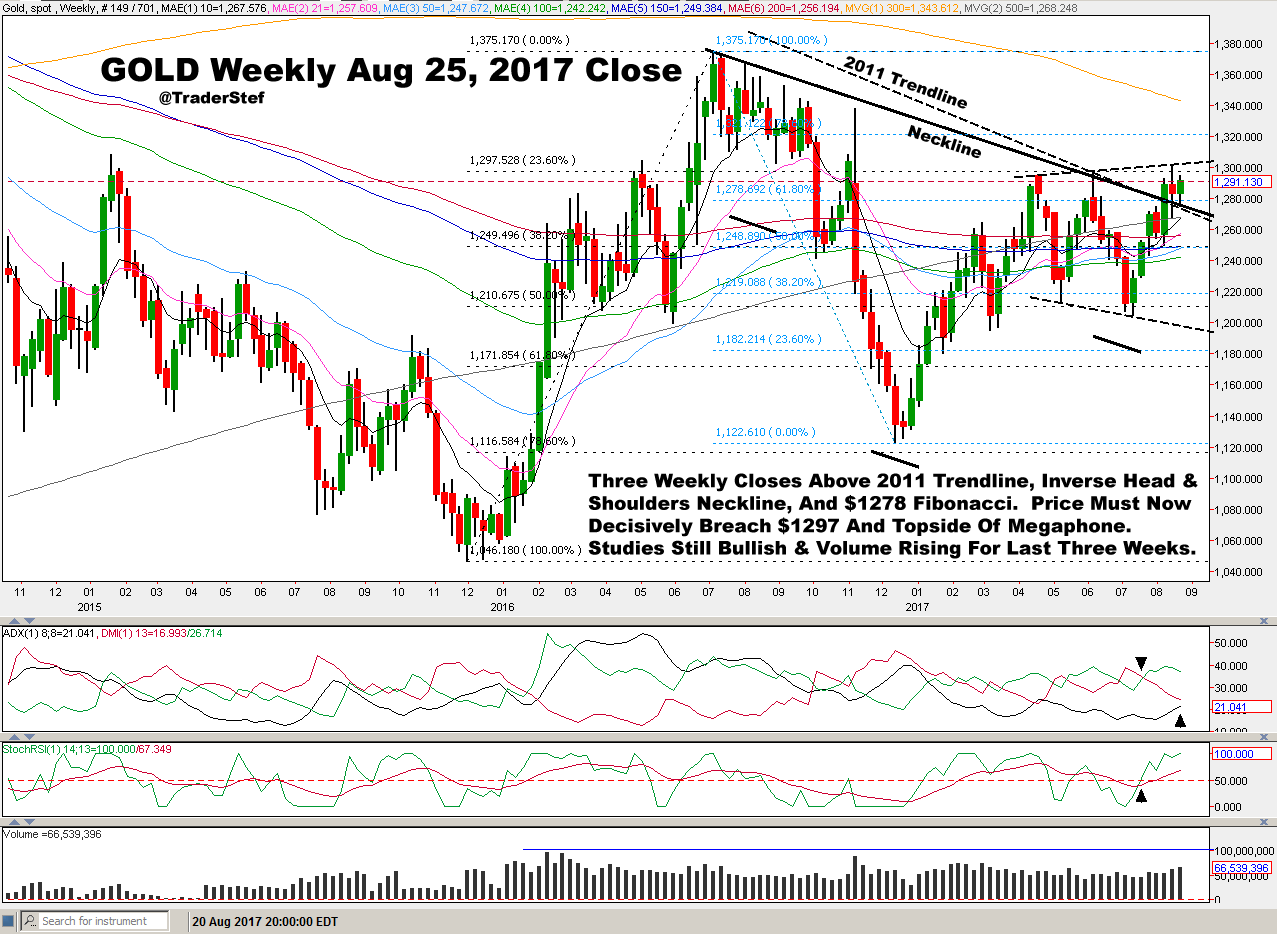 NEUTRAL: silver is not as bullish as gold right now and not as bearish as it was, but it still has topside Trendline resistance to destroy if the price is to make substantial upside progress.  It must also decisively take out the 50EMA overhead, which has stopped the price in its tracks for three weeks. There are two positive developments in the chart. MACD has begun a positive trend, in addition to the StochRSI maintaining a bullish stance.  I remain neutral on silver until gold takes the lead. When gold makes a run to $1,320, its little brother will happily follow along. 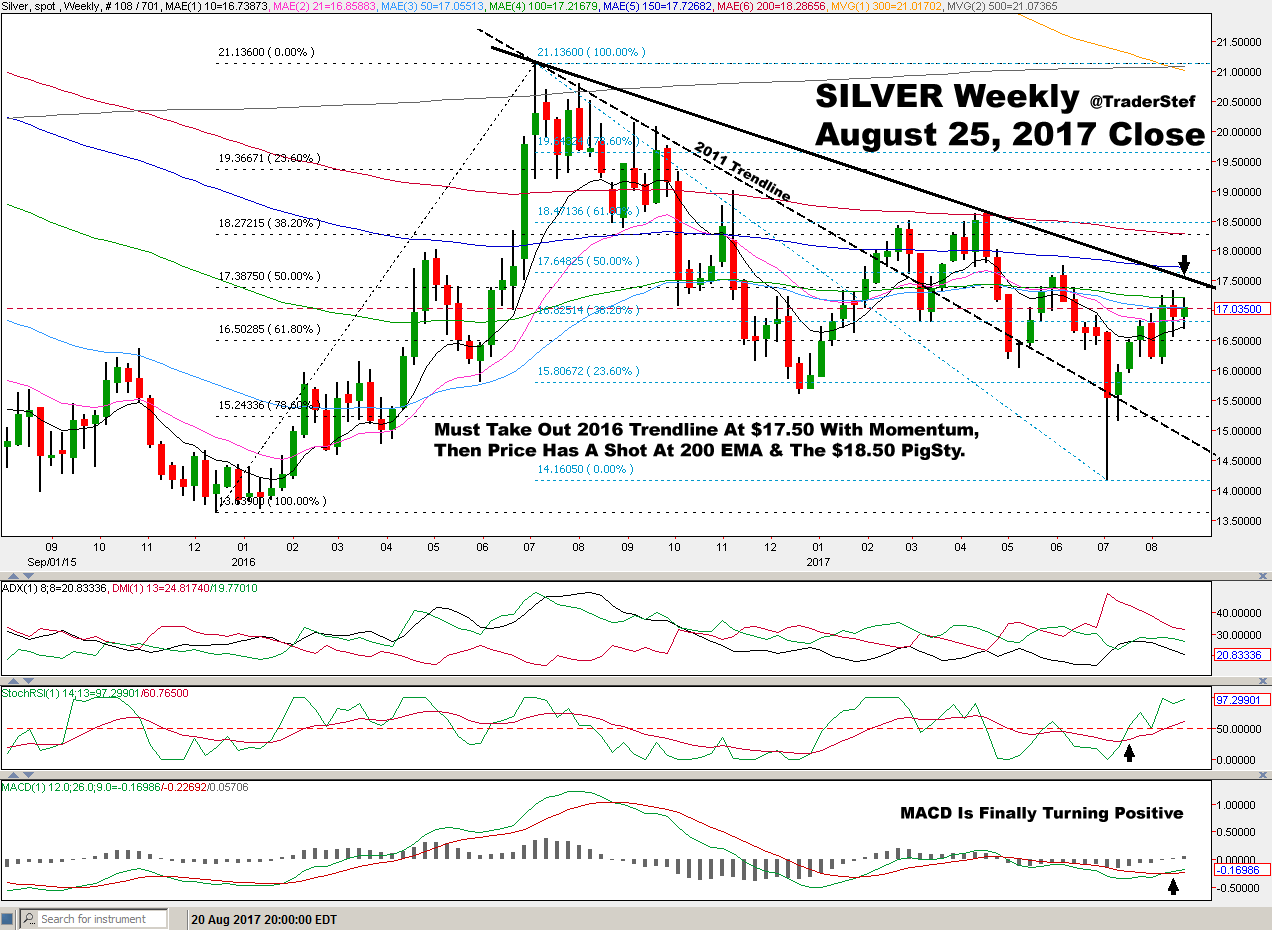 BEARISH: looks like further USD downside is baked in the cake.  200EMA is breached. 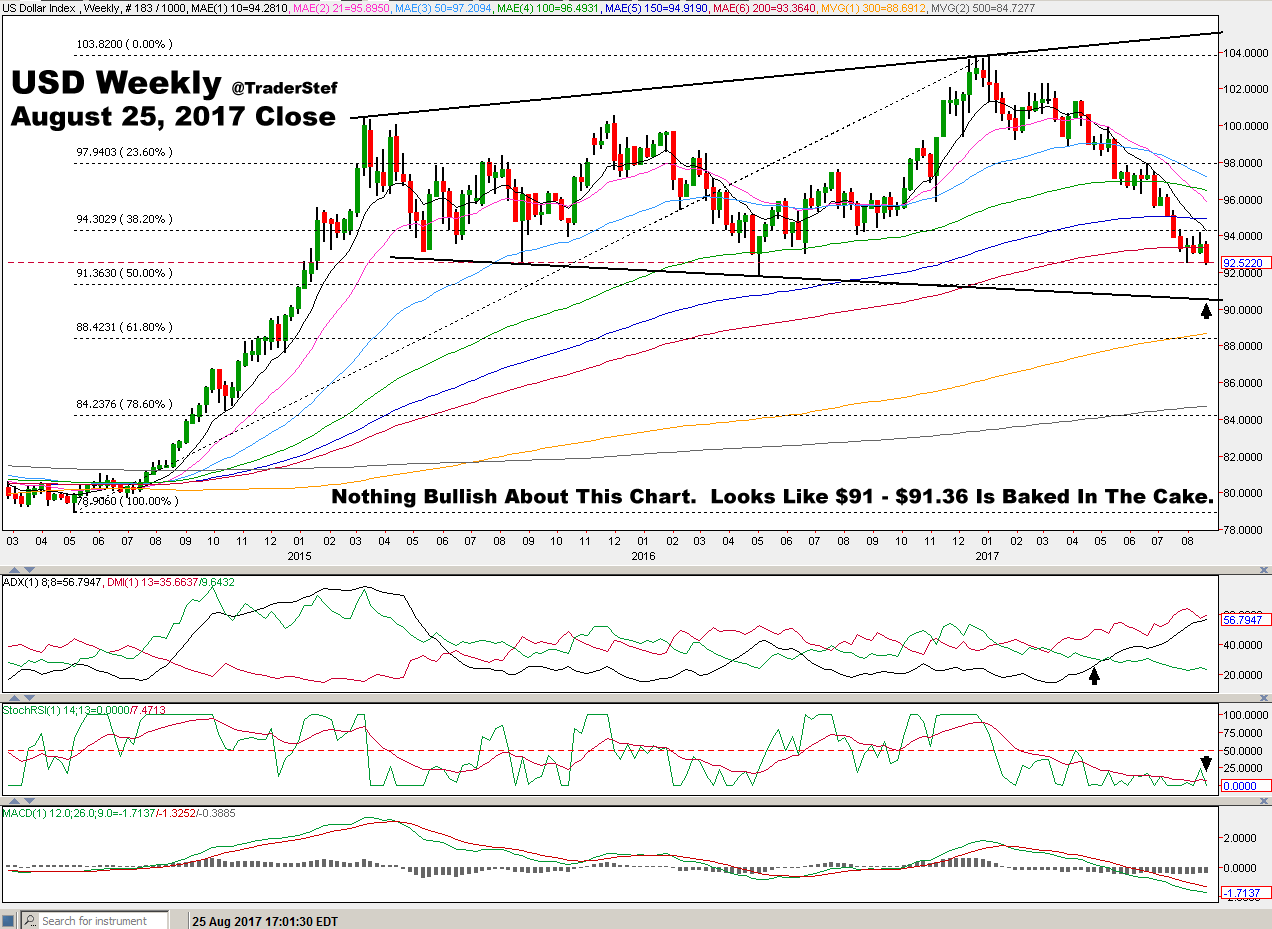