Despite the focus on China, trade deficit numbers, and cost by the mainstream media, steel and aluminum tariffs are not a Chinese-focused issue. U.S. national security is the focal point commandeered by the administration in a push to rebuild our infrastructure and manufacturing base. In a recent article I published in February, I discussed the Pentagon’s enormous budget boost for a TBTF military industrial complex. The issue at hand is highlighted, where in Sep. 2017, 10 retired generals and flag officers sent a letter to the POTUS urging him to wrap up the national security investigations into steel and aluminum imports.

Military Leaders Tell Trump to Act on Steel and Aluminum Imports “Before It Is Too Late”… “America’s increasing reliance on imported steel and aluminum from potentially hostile or uncooperative foreign governments, or via uncertain supply routes, jeopardizes our national security. If U.S. manufacturing capabilities are compromised, we will be forced to rely on countries like China and Russia to supply our military and critical infrastructure needs.” – Alliance for American Manufacturing, Sep. 2017 (2016 White Paper Report)

Steel armor plate for US military must be produced in the US… “The U.S. Department of Defense has restored a rule mandating that steel armor plate purchased by the U.S. military be made in the United States.” – Dayton Daily News, Apr. 2013

American-Made Steel Contributes to an American-Made Defense… “Not long ago came the news that a Buy America provision for the steel procured by the U.S. Department of Defense had been renewed. That means public money spent on steel for our national defense will support American jobs – not state-owned enterprises elsewhere who might not have America’s best interests at heart. As recently as 2013, an alarming number of critical materials in the defense supply chain were found to have been produced overseas.” – Alliance for American Manufacturing, Mar. 2016

Here is a chart that breaks down origins of U.S. steel imports in 2017. 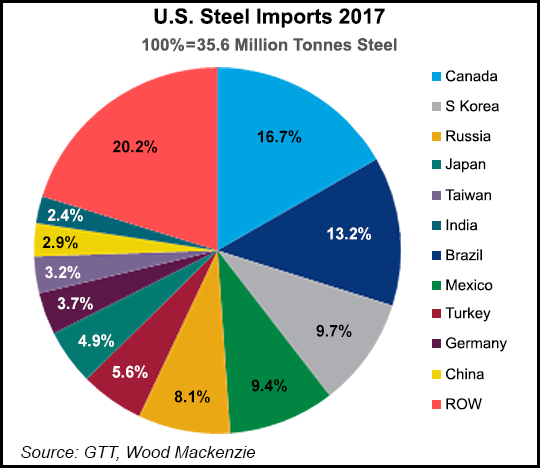 To break down China’s fraction a bit further…

Trump tariffs have world traders steeling for conflict… “Last year, the United States imported 35.6 million tonnes of steel — equivalent to some 36pc of the country’s consumption, worth $33.6 billion, according to analysts from Wood Mackenzie. Yet China, the world’s top steel producer, accounted for a mere 2.9pc of US imports — and only 1.4pc of overall Chinese exports of the metal totaling 74.82m tonnes. ‘Thus, the steel tariffs will not have much impact on Chinese steel exports and China does not have as much to lose as the traditional US trading partners,’ noted Wood Mackenzie senior analyst.” – Dawn, Mar. 3

Canada and Mexico are exempted and granted an opportunity to renegotiate NAFTA before being hit with tariffs. The door was left open for all countries affected to renegotiate trade, otherwise tariffs will continue.

What are the hypocrite-hypocrats in the E.U. and NATO doing while they complain about the new policy?

NATO Allies Press Trump To Stop Steel Crackdown… “They argue that protectionist measures on the metal will hurt them.” – FP, Jun. 2017

Europe Renews Tariffs On Chinese Steel Pipes As High As 72%… “As the world watches breathlessly [to see] if Trump will follow through with his threat to slap steel and aluminum import tariffs, Europe continues to quietly ratchet up its own trade war with China and nobody seems to mind.” – ZeroHedge, Mar. 2018

Let’s go to the video tape at the Oval Office on Apr. 20, 2017, where the POTUS signed an Executive Order empowering Wilbur Ross to lead the probe into steel imports. Listen carefully to what the POTUS says.

The subsequent report was released by the Department of Commerce on Feb. 16, 2018. Here is the summary:

Key Findings of the Steel Report:

IMHO, there is a more sinister issue brewing under the surface that is not being fully exposed to us sheep, which is inferior quality of imported products.

Warning Chinese steel imports could be safety threat… “Chinese steel being imported into the UK could be putting lives and buildings at risk, as well as jobs. Additives in some Chinese steel used to reinforce concrete can affect the metal’s strength when it is welded and now UK industry is highlighting the dangers posed by it. Chinese steel makers sometimes add boron to their products to get a tax rebate as it was classed as an alloy. When the steel joined by arc welding, boron can make welds more likely to crack, weakening structures. The risk comes from current regulations not requiring steel-makers to specify how much boron has been added if the steel is used for reinforced bar – or rebar – which is added to concrete to strengthen it. This means that construction companies could unwittingly use steel which could pose a risk because it is being welded using techniques that could weaken it… The news comes just weeks after Tata said it would cut up to 720 jobs at its steel works in Rotherham, South Yorkshire, because it could not compete with cheap imports from China.” – The Telegraph, Aug. 2015

Safety concerns over imported fabricated steel flooding Australian market… “What concerns us most of all is there’s going to be a terrible accident, and that’s unacceptable… If you did have a catastrophe and a building collapse, it would be shocking…. Welds started failing, material started failing and a bridge was on the verge of collapse… When bridges fail, they fail catastrophically and pretty much without warning… You’ve got to be absolutely 100 percent certain with bridges, that they’re built to proper standards… The industry says official Australian standards are not met by all fabricated steel products imported into the country.” – ABCnet, Nov. 2015

Kobe Steel, Japan, Toyota hit with U.S. lawsuit over vehicle metal quality… “U.S. consumers have filed a lawsuit against Kobe Steel Ltd and Toyota Motor Corp accusing the companies of violating consumer protection laws and engaging in fraud by concealing the use of substandard metal components in vehicles… The 112-year-old company, which supplies steel and aluminum parts to manufacturers of cars, planes and trains around the world, admitted last year to supplying products with falsified specifications to around 500 customers, throwing global supply chains into turmoil. Kobe, Japan’s third-largest steelmaker, said on Tuesday that the data fraud had gone on for nearly five decades, and that it found new cases of impropriety, widening the number of affected clients to 605, including 222 overseas.” – Reuters, Mar. 2018 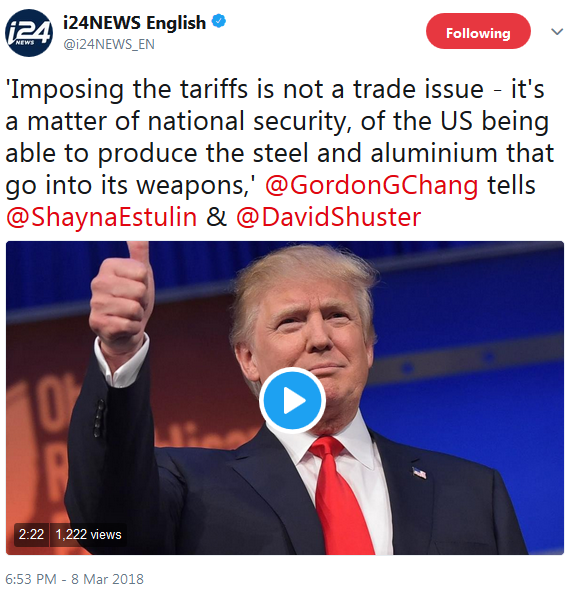 What has the POTUS tweeted lately?

“When a country (USA) is losing many billions of dollars on trade with virtually every country it does business with, trade wars are good, and easy to win. Example: when we are down $100 billion with a certain country and they get cute, don’t trade anymore — we win big. It’s easy!… When a country taxes our products coming in at, say, 50%, and we tax the same product coming into our country at ZERO, not fair or smart… We must protect our country and our workers. Our steel industry is in bad shape. IF YOU DON’T HAVE STEEL, YOU DON’T HAVE A COUNTRY!”

Every once in a while, the lion has to show the jackals, who he is.

The amount of material that will be required to rebuild the military is enormous.  One example is shipbuilding.

Pentagon Wants a 355-Ship Navy. But Who Will Build It… “The Navy’s official ship count has already fallen by a dozen from the 285-ship-count of just six months ago, and it could fall farther as the Navy retires older submarines, cruisers, amphibious assault ships, and resupply vessels… The Navy published a Force Structure Assessment (FSA) in 2014 insisting that to adequately fulfill all the missions it’s being asked to undertake, the Navy needs an absolute minimum of 308 warships. But not long after Donald Trump’s election, a new number surfaced: 355. As reported by USNI News earlier this month, the Navy’s 2016 FSA has bumped up its wish list of new ships by 47 hulls… In an ideal world, where money is no object, the Navy says it would like to have 653 ships, well over twice the size of the current fleet. But anything less than 355 ships will result in an unacceptable ‘level of warfighting risk to our equipment and personnel.’ Which makes 355 the Navy’s new sine qua non.” – Motley Fool, Jan. 2017

US Navy is seeking proposals for more destroyers… “The Navy has submitted a request for proposals for more destroyers to be built by either General Dynamics ($GD) Bath Iron Works in Maine or Huntington Ingalls Industries ($HII) shipyard in Mississippi, or both. The Naval Sea Systems Command issued its final request on Thursday for Arleigh Burke-class destroyers built with ballistic missile defense capability. The contract covers the fiscal years 2018 through 2022. The request for proposal doesn’t mention the number of ships but earlier Navy documents envisioned up to 10 destroyers, with options for more. Bath Iron Works said Friday that the company will be assessing the latest request. The company had no further comment.” – Military Times, Feb. 10, 2018

For any terrain geeks out there, here is a link to a map of where steel manufacturing takes place in North America via the American Iron and Steel Institute.

Due to ($X) U.S. Steel’s size, raw supply manufactured during past military build-ups, and its presence surrounding the recent tariff’s debate, here is the weekly chart to consider. 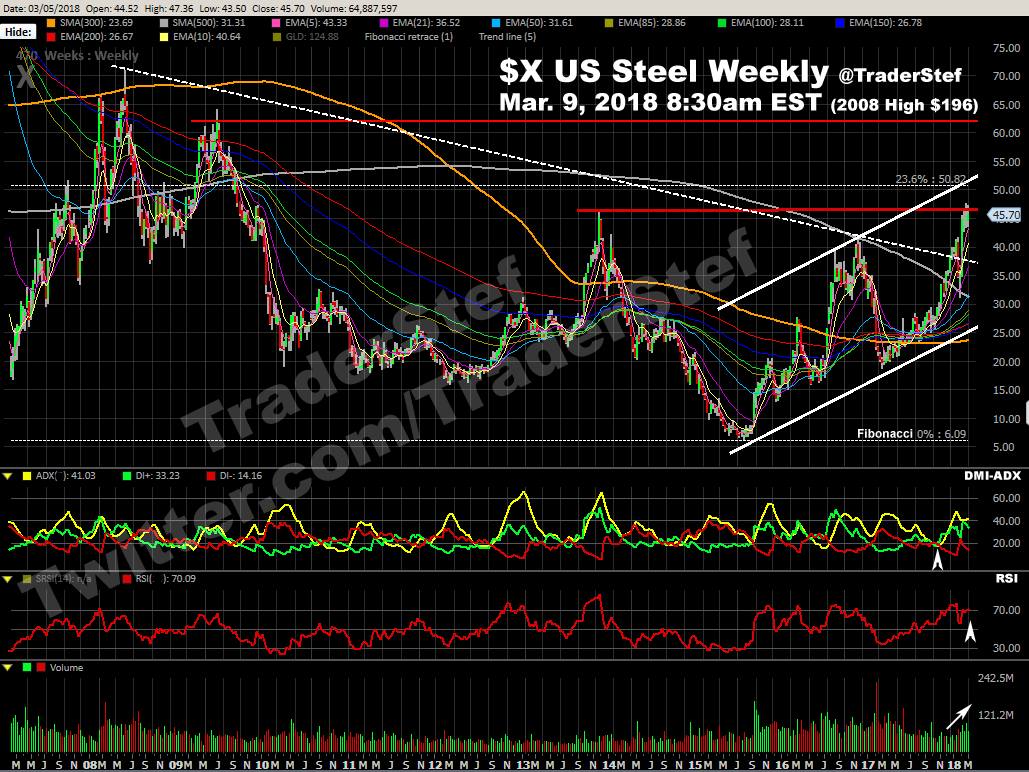 For those with a short memory or millennial lifespan, a movie named “Heart of Steel” was released in 1983.  A U.S. steel factory that employs most of a town shuts down, leaving a man desperate to keep his family and friends together. Here is the full move.