It is said that the Bald Eagle became part of the emblem and national coat of arms that represents freedom for the United States because at one of the first battles during the onset of the American Revolution, noise from the battle below had awakened some eagles in the early morning. They flew from their nests and circled over the heads of the fighting soldiers, all the while venting raucous cries. “They are shrieking for freedom,” said the patriots. Since ancient times, the eagle has been considered a sign of strength – Roman legions used the bird as their standard or symbol.

The eagle is highly revered by many Native American cultures. There are special eagle dances, ceremonies, and societies.  Native Americans consider the Bald and Golden Eagles to be sacred, as eagles are the highest-flying birds and are seen as being nearer to the creator. The eagle as a symbol signified courage, wisdom, strength, higher consciousness, and its purpose was as a messenger of prayer to (and the bringer of messages from) the creator.

A Native American story about the Great Flood, the creator, and an Eagle Dance…

The Bald Eagle is the largest and only eagle unique to North America, with half its population living in Alaska. They have a high tolerance to cold temperatures because their skin is protected by feathers lined with down, and their feet are cold-resistant, consisting of mostly tendon. Its distinctive brown body and white head and tail make it easy to identify from a distance. The scientific name signifies a sea (halo) eagle (aeetos) with a white (leukos) head. At one time, the word “bald” meant “white,” not hairless. When flying, they rarely flap their wings, but soar instead, holding their wings almost completely flat. Their length can be up to 40 inches, with a wingspan of 7.5 feet and a weight of 14 pounds. An eagle’s eye is almost as large as humans’ are, but its sharpness is at least four times that of a person with perfect vision. A bird of prey and primarily carnivorous, it does prefer fish, and it has the longest lifespan of its species. A Bald Eagle’s lifting power is about 4 lbs. Generally, they do not feed on domestic livestock or pets, but they will make use of available food sources and take advantage of carrion.

Partners mate for life and return to the same nest every year, continuing to build a larger and stronger nest. They typically nest in a forested area adjacent to a large body of water, staying away from heavily developed areas when possible, and they prefer tall, mature coniferous or deciduous trees that afford a wide view of the surroundings. They build the largest tree nest of any animal in the world, which can be up to 20 feet deep, 10 feet wide, and weigh a ton. Both sexes bring material for the building, but the female does most of the placement. They weave together sticks and fill in cracks with soft material such as grass, moss, or cornstalks. The inside of their nest is first lined with lichen and fine woody material, then covered with downy feathers and sometimes sprigs of greenery. Nests can take up to three months to complete.

Given the role Native Americans had in helping the original colonialists survive, as well as contributing to the underlying principles of the Declaration of Independence and U.S. Constitution, esoteric connections developed that influenced the founding fathers in their search for an official seal of a new nation. I suspect Native American reverence for the eagle was one such influence, and the Bald Eagle was selected for its long life, strength, courage, and majestic appearance.

The Native American Source for the Declaration and the Constitution… “All well and good. Certainly ancient Greece and Rome, medieval England, and the minds of Washington, Franklin, Jefferson, and others were vital contributions to the ideas of the Declaration of Independence and the Constitution. But one source, hiding in plain sight, so to speak, is frequently overlooked. This is the contribution of native Americans, particularly the Iroquois, to the mix. The Iroquois constitution, called the Great Law of Peace, or Gayanashagowa, contains many echoes of our Constitution, and in a number of respects, is more advanced in thought than the Constitution that resulted from the Convention of 1787. This is not something I made up. If you read the original documents from the time, from people like Benjamin Franklin and George Washington, you will easily see that they deeply acknowledged their debt to the Iroquois and other Native Americans. It’s no accident that the protestors at the Boston Tea Party chose to disguise themselves as Indians. They did this out of respect for the democratic and free nature of Indian society – something they were trying to establish in the face of what they considered British tyranny…” – Ira Krakow

Shortly after the Declaration of Independence was signed on July 4, 1776, the Continental Congress began the work of identifying an emblem and national coat of arms to give visible evidence of a sovereign nation and a free people with high aspirations and great hopes for the future. Benjamin Franklin, Thomas Jefferson, and John Adams took on the first attempt of developing a design. They sought the help of a “drawer” and portrait artist, Pierre Eugene du Simitiere. Pierre brought knowledge of describing coats of arms and had experience in designing seals. Four features from the collaboration were adopted in the final seal: the Eye of Providence and the date of independence (MDCCLXXVI) that appeared on the reverse side and the shield and Latin motto, E Pluribus Unum (out of many, one) on the obverse. On August 20, 1776, Congress ordered it “to lie on the table” without approval.

In March 1780, a second committee formed, with James Lovell, John Morin Scott, and William Churchill Houston. Francis Hopkinson, a gifted Philadelphian who designed the American flag and great seal of New Jersey, served as a consultant. They also failed to create a final seal, but they did contribute to the final design: 13 red and white stripes adopted from the flag of 1777, a constellation of 13 six-pointed stars, and the olive branch as symbol of peace.

In May 1782, a third and final committee formed, with John Rutledge, Arthur Middleton, and Elias Boudinot. They primarily relied on the services of William Barton. William was a young Philadelphian lawyer with artistic skill and who was well-versed in heraldry. His primary contribution was a small-crested white eagle with its wings spread. He combined it with a small flag and a design for the reverse side that contained a 13-step unfinished pyramid and the first committee’s Eye of Providence. He quickly drew up two designs with technical explanations. The committee turned in its report five days after appointment.

After six years and three committees, all the drafts were given to Charles Thomson, the Secretary of Congress, in 1782. Charles selected what he thought were the best elements and made the eagle more prominent. He also replaced the small white eagle with an American Bald Eagle. Congress approved the design on June 20, 1782. It went on to appear on official documents, currency, flags, public buildings, and other government-related items, and it became an American icon. 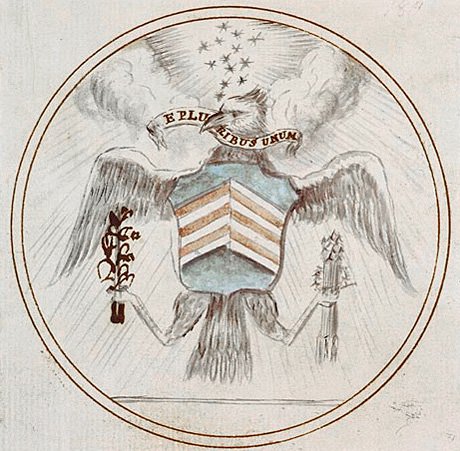 What is considered to be the first distinctive American gold coin, as well as most historical and important of all U.S. numismatics, is the first post-revolution coin with the new Coat of Arms featuring a Bald Eagle. This was the American Brasher Doubloon, struck in 1787. It was not a coin from any “official mint.” You can find a visual list of all official U.S. coins since 1795 at the PCGS coin facts page.

American Brasher Doubloon gold coin struck in 1787 sold for more than $5 million… “It was the work of Ephraim Brasher, a silversmith who lived next door to George Washington in New York City following the American War of Independence. The Brasher Doubloon is one of only seven known to be in existence and is regarded to be in the best condition of those coins that remain. On one side of the coin is the Great Seal of the United States, an eagle clutching an olive branch and arrows. Brasher’s hallmark – the letters EB – are inside an oval on the eagle’s right wing. The reverse displays a version of the state of New York’s coat of arms, featuring a sun rising over a mountain peak and the sea surrounded by the words NOVA EBORACA COLUMBIA EXCELSIOR, which translates to ‘New York, America, Ever Higher. The coin was sold to an anonymous collector on the U.S. west coast in a private transaction brokered by Heritage Auctions, the world’s largest rare coin auctioneer.’” – The Telegraph, Mar. 24

By far, the most popular American numismatic gold coin and one of the most beautiful American coins ever issued is the 1907-1933 St. Gaudens $20 Double Eagle. 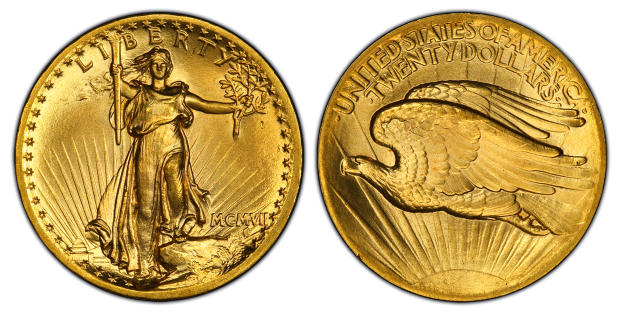 Augustus Saint-Gaudens was one of the most distinguished American sculptors and monument builders of the late 19th and early 20th centuries. Notable works include his iconic copper statue of Diana, several bronze monuments to President Abraham Lincoln, and the General Sherman Monument in New York City. He was a master of the human form while bringing life to the personality of his subjects. He was born in Dublin, Ireland in 1848, the son of a shoemaker that moved his family to New York when Augustus was only six months old. Growing up in the city, he became interested in art, and at thirteen, he left school to apprentice with a cameo cutter. As an apprentice, he took classes at Cooper Union and the National Academy of Design. At 19, he moved to Europe and continued studies in Paris and Rome. Studying classical art and architecture, he began to work as a professional sculptor.