Correlation, cause, or thrown in with a flash crash turkey shoot? To be clear, the recent market plunge was not just about economics and automated trading platforms, but involves Jamal Khashoggi, the Washington Post journo who was allegedly killed at the Saudi consulate and dismembered in Istanbul. After reviewing events and financial news items since the Fed punted interest rates another .25% on Sept. 26 with a muted market response, it appears the disappearance of Khashoggi after the FOMC punt may have set off a few powers-that-be alarm bells, and a wave of selling along algorithmic mayhem ran the tapes.

The disappearance of a reform-minded journo is only the latest in a string of issues that have cast doubt over Saudi Arabia, now under the sword of Crown Prince Mohammed bin Salman (MBS). MBS was praised for instituting broad reforms, such as Vision 2030, but he did launch a war in Yemen in response to Iranian influences, directed a blockade of Qatar, detained and reportedly tortured several out of hundreds of journos, activists, clerics, businessmen, and Saudi officials. He also instigated a diplomatic row with Canada over a mere criticism, along with a laundry list of perceived infractions in diplomacy, human rights, and financial decisions. MBS is gaining a reputation of being impulsive, and perhaps irresponsible.

There is a chance MBS directly had nothing to do with Khashoggi’s “Hostel” killing and may be a politically motivated abduction gone badly, and an elite clean-up crew flew into Istanbul to clean up the forensic mess but left behind a digital loose end in an Apple cloud. No matter what the evidence eventually shows, MBS and Saudi Arabia will likely pay a price vs. the usual hand slap, as this potential hack job is looking to be a bridge too far for corporate public relations and the international community to swallow. Saudi Arabia is not the sole country in the Middle East where authoritarianism appears to be flourishing again. Egypt remains under the rule of a military field marshal, Assad of Syria is on the brink of reclaiming his power over the populace with the help of Russia and Iran, and other Middle East citizens are seeing their aspirations as a result of the Arab Spring becoming a memory, rather than an achieved goal.

The POTUS has flaunted recent economic and diplomatic accomplishments, which include Saudi Arabia, as being evidentiary of his deal-making savvy. He has taken a cautious approach to dealing with the current stink over the Saudi hack job and he’s pushing back on any suggestion by politicos to sanction arms sales because the Saudis would turn to Russia or China if the U.S. takes a hostile stance toward Saudi investments. He said that it “would be a very, very tough pill to swallow for our country.” There may be hope in the White House war room that the Khashoggi issue will quiet down before the U.S. midterm elections, but the Turks will likely not be so accommodative given their own sore wounds over recent issues.

If evidence does indeed prove Saudi’s guilt, anger from our congressional critters could brew over into renewed actions to sanction Saudi Arabia, discontinue arms sales, and push back on support for the war in Yemen. Moreover, the attempt by the Senate last spring to invoke the 1973 War Powers Act may force a vote to end all U.S. military assistance in the Yemen debacle.

Saudi Arabia has always been a strange bed partner for the U.S., not to mention their involvement with 9/11, but the relationship always remained intact with the petrodollar heaven keeping the financial order. This time, the benevolence might run out as politicos and corporate interests turn on MBS with a swiftness not seen since Gadhafi in Libya, a leader once championed by Western supporters as major influence for reform in the region.

Khashoggi’s Apple Watch could give details about his disappearance – Fox Business, Oct. 12

Trump vows punishment if journalist was murdered by Saudis – Inside Story via CNN, Oct. 13

Margin Call: Burst Of Sell Orders At 2:43PM Was Highest Since The Flash Crash – ZeroHedge, Oct. 11

Blame Game Begins: Humans Blame Machines For Selloff, Machines Blame Humans… “The sell-off post-mortems continues, and with human action seemingly unable to explain what happened on Wednesday and Thursday, especially at or around the 3pm selling peak observed on both days, attention is now focusing on quants, algos and other machines that may have been involved in indiscriminate selling.” – ZeroHedge, Oct. 12

‘Davos in the Desert,’ a Saudi Prince’s Glittering Showcase, Is Stained by a Grisly Accusation – NYT, Oct. 13

Saudi Arabia investments in the U.S. and vice versa are yuge. Any major fallout with the Saudis, not to mention within a country like Turkey, who happens to be a NATO member that is not expeditiously nipped in the bud, could launch a rollover scenario. Wednesday, Oct. 10, 2018 was a global preview. Here is the hourly DOW chart since the Fed raised interest rates. The mainstream financial pundits and politicos blaming the Fed for the market plunge do not hold water. 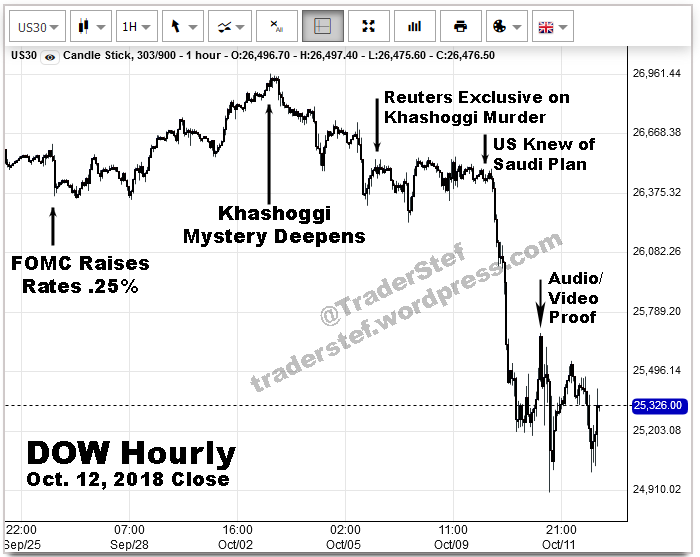 Kris Kristofferson And Jane Fonda In ‘Rollover’… “’Rollover,’ which was directed by Alan Pakula and opens today at the Criterion Center and other theaters, works neither as love story nor as satire, and it isn’t even the thriller it sets out to be. It begins with a murder.’” – NYT, Dec. 11, 1981 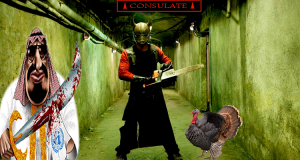