The civil dystopia and threats of political revolution that surround the 2020 U.S. presidential election are among the many factors influencing the gold market and it points to a bullish continuation no matter who occupies the White House seat. 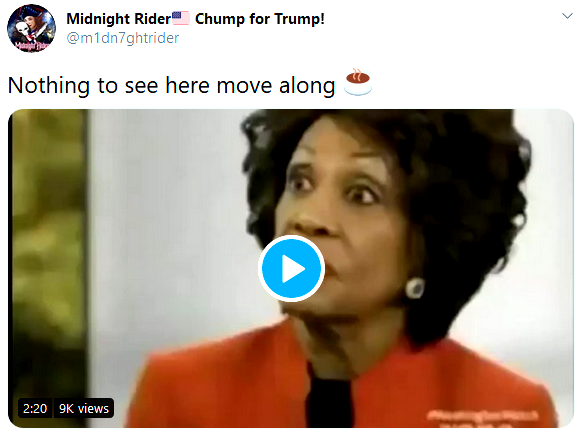 As of this evening, the election is still a cliffhanger as tensions mount, the Democratic caucus eviscerated each other during today’s conference call on Capitol Hill over their socialist messaging, and automated trading algos have rallied U.S. stock markets since Monday on expectations that a Biden victory is a win-win. Bad news is now good news. None of it makes any sense because the A.I. and machine-learning cannot interpret inherent subtleties in human folly and intuitive thought processes.

“No individual, deterministic machine, however universal this class of machines is proving to be, will ever think in the sense that we think. Intelligence may be ever-increasing among such machines, but genuinely creative intuitive thinking requires non-deterministic machines that can make mistakes, abandon logic from one moment to the next, and learn.  Thinking is not as logical as we think.” – George Dyson, Science Historian; Author, Turing’s Cathedral: The Origins of the Digital Universe

The Biden camp has promised higher taxes that will ultimately impact all income levels, businesses, and capital investment no matter what utopian fantasy they sell. He will repeal many provisions in the 2017 Tax Cuts and Jobs Act, reinvigorate Obamacare policies, rescind advances made with deregulation that was aggressively implemented by the Trump administration, and follow the pursuit of a New Green Deal disaster that the progressive left and “The Squad” plan to execute as soon as their dementia-driven strawman is ultimately usurped by Kamala. The only ammunition the Republic has left to resist a socialist tsunami is to hold the conservative majority in the Senate and keep constitutional originalism at the Supreme Court to help stem the tide of endemic judicial activism across all judicial branches.

Wall Street machines are not concerned about the peasantry, real economy, or demagoguery, as it is tuned for pandemic second-wave semantics with new daily cases in the U.S. and Europe going exponential along with hospitalizations, death, and lockdowns on the rise, that will ensure a continuation of CARES Act fiscal Kool-Aid that is technically not stimulus because it only replaces what was lost in the pandemic turmoil, and the machine has memorized an unprecedented Fed monetary flood that is gift-wrapped until at least 2023.

“I’ve been saying if POTUS does not humble himself and get real in public about the COVID-19 SARSCoV2 pandemic Herald Wave, odds of his re-election will turn out be a Shakespearean tragedy for all of us. Bannon urging action this morning…https://t.co/K7TtHI6s3x“ – TraderStef, Jul. 19

Next Up: Global Depression… “The belief that central banks printing currency can ‘buy/fix’ everything that’s broken, lost or scarce is the ultimate in denial, fantasy and magical thinking. All that was unsustainably fragile, corrupt and brittle is unraveling, and thinking that ending the lockdowns, approving a vaccine, etc. will stave off causality is the supreme indulgence in denial, fantasy and magical thinking.” – Charles Hugh Smith, Oct. 26

Regardless of who occupies the Oval Office, the printing presses are stocked with paper and overflowing with ink ever since the Fed Put was birthed in 1987, and this past August, Jay Powell promised an inflation steroid shot. That is great for the price of gold because it does not matter if fiat cash comes from Congress, the Fed, or both, as central banks’ keep stuffing their vaults with gold bars since 2010, investors continue hoarding gold or silver on the cheap, and various mainstream investment vehicles such as pensions funds continue to add pet rocks to their portfolio. The bottom line is that quantitative easing does not have an end date on the horizon, negative real interest rates are widespread and extremely favorable for gold, there is no U.S. debt ceiling in sight, and a global currency reset looms closer every day in a post-pandemic world where a “don’t let a good crisis go to waste” opportunity awaits.

Let’s move onto a brief overview of gold’s price action since the Jun. 2019 breakout from $1,380, the rally that began in May 2020, and what we might expect as winter sets in.

Jim Cramer has apparently discovered the secrets of Fibonacci  during his Mad Money broadcast on gold on Nov. 3, and the dollar is tanking right on schedule.  If you missed my technical analyses that were covered in three recent interviews since August, you can review them here, here, and here. To view a larger version of any chart below, right-click on it and choose your “view image” option.

Excerpts from my gold analyses since early summer 2019:

Talked Out of a Gold Rally While Whining?… “The following chart from Jun. 5 was indicative of major accumulation taking place and solidified the recent rally… Two Swiss Stairs in sets of three – the second set tightened before an Inverse H&S Continuation pattern developed with a neckline breakout.” – Jun. 14, 2019 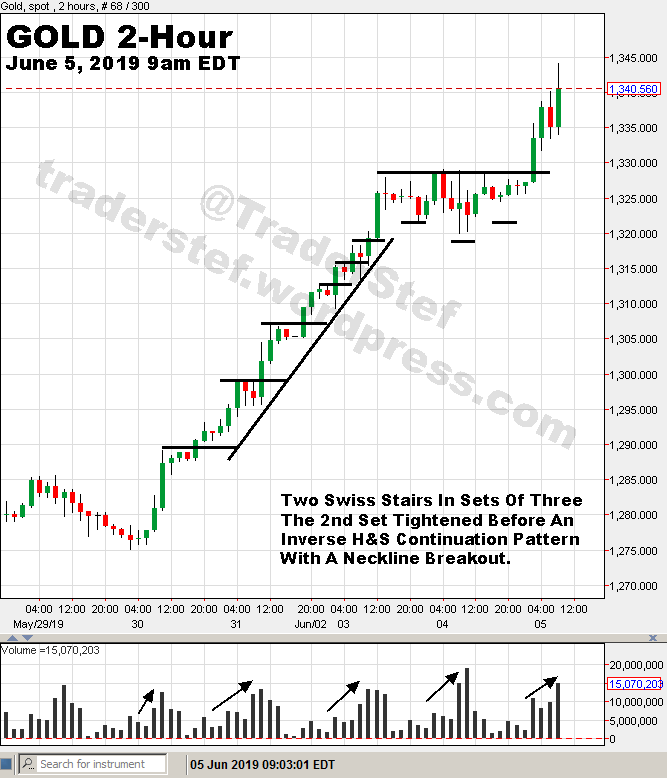 Gold’s Alligator Tongue and Asian Short Squeeze Obliterated $1,380 Resistance… “The Fibonacci resistance level at $1,380 is now history after 5 years. Do not be shocked or whine if a pullback occurs and tests the resilience of support at $1,380. As I type this tonight, the price of gold traded at $1,412 in the Asian market. There is not much resistance for upside potential.” – Jun. 20

“Given current events, any technical studies on the daily chart that may not be in perfect alignment for a bullish move to $1,800 as we enter early summer, will be forced to do so in the very near-term. With that said, keep eyes on $1,750 and $1,765 for potential resistance before gold pushes onward.” – May 31, 2020

“After breaking out of the Pennant, then chopping out into a Descending Broadening Wedge, the price action has completed a bullish Inverse Head & Shoulders drawn back to May 21 and is threatening to break above its $1,750 neckline overnight. The DMI-ADX is not optimally set-up yet, but the StochRSI is bullish. Stay on your toes for a potential sweet spot move to the upside as spring seasonality chop & consolidation comes to a close.” – Jun. 21 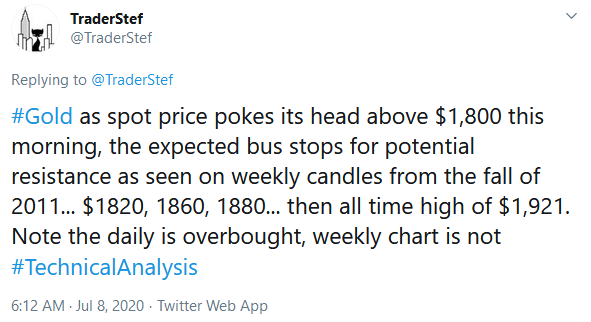 Gold & Silver Chart Exclusive – It’s Showtime!… “The high print as of 9:30pm this evening was $1,865. The daily chart is in overbought condition. The weekly chart StochRSI is getting long in the tooth and the DMI-ADX has been in a bullish mode since the summer of 2019. There is more room for upside in the near-term, but the price action is due for a breather as the $1,860 & $1,880 lateral are just ahead. Just as with silver, some consolidation and backfill with a retest of support at $1,820 would be constructive. The next level beyond $1,880 is the $1,920 all time high, then blue sky is in view with additional analysis when we get there.” – Jul. 21 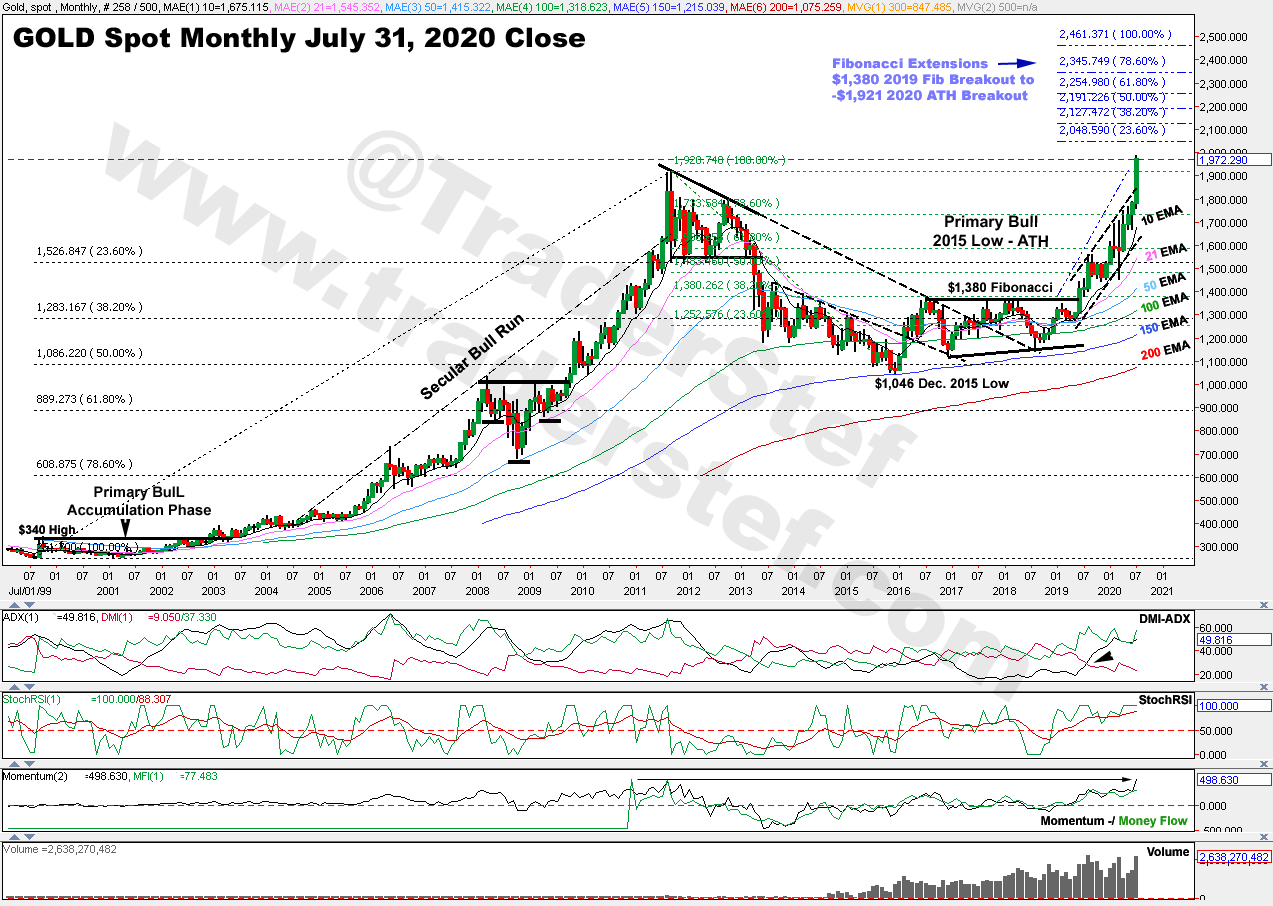 “As noted on Aug. 2nd, a pullback that tests support at the 2011 $1,920 all-time-high was necessary after the price action had gotten ahead of itself within an overbought condition. The pullback began on Aug. 7th, but not until the first Fibonacci Extension at 23.6% was challenged… The chart remains bullish with an intact uptrend.” – Sep. 16

“Heads-up. A potential sweet spot is brewing if gold spot breaks out above $1,920ish, the previous all-time-high lateral that has become a support/resistance area.” – Oct. 9 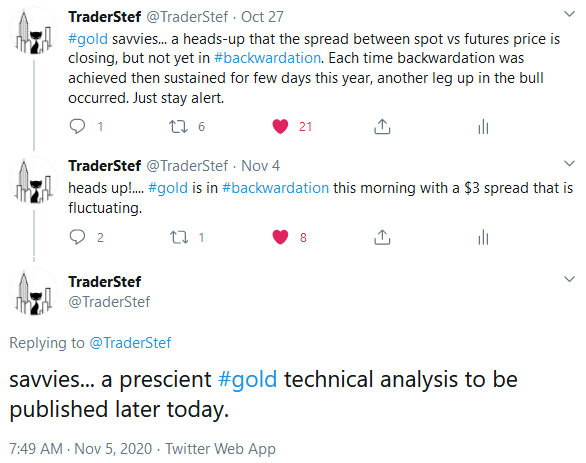 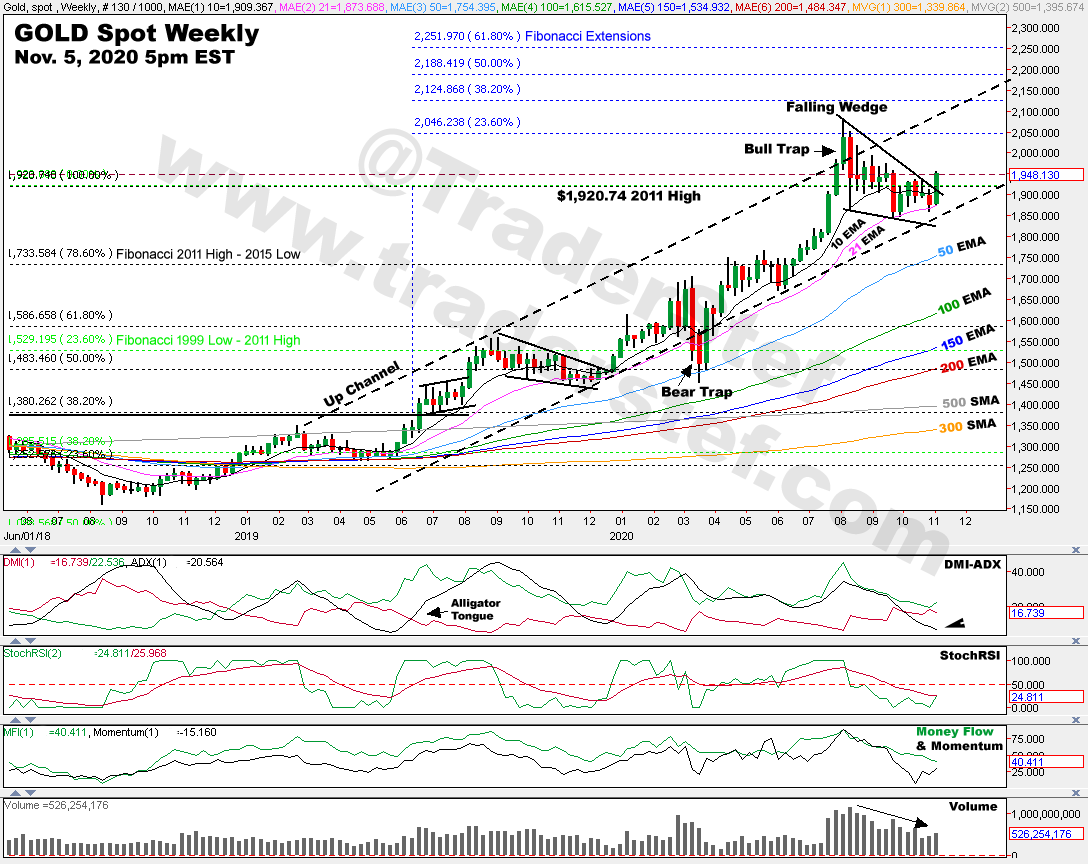 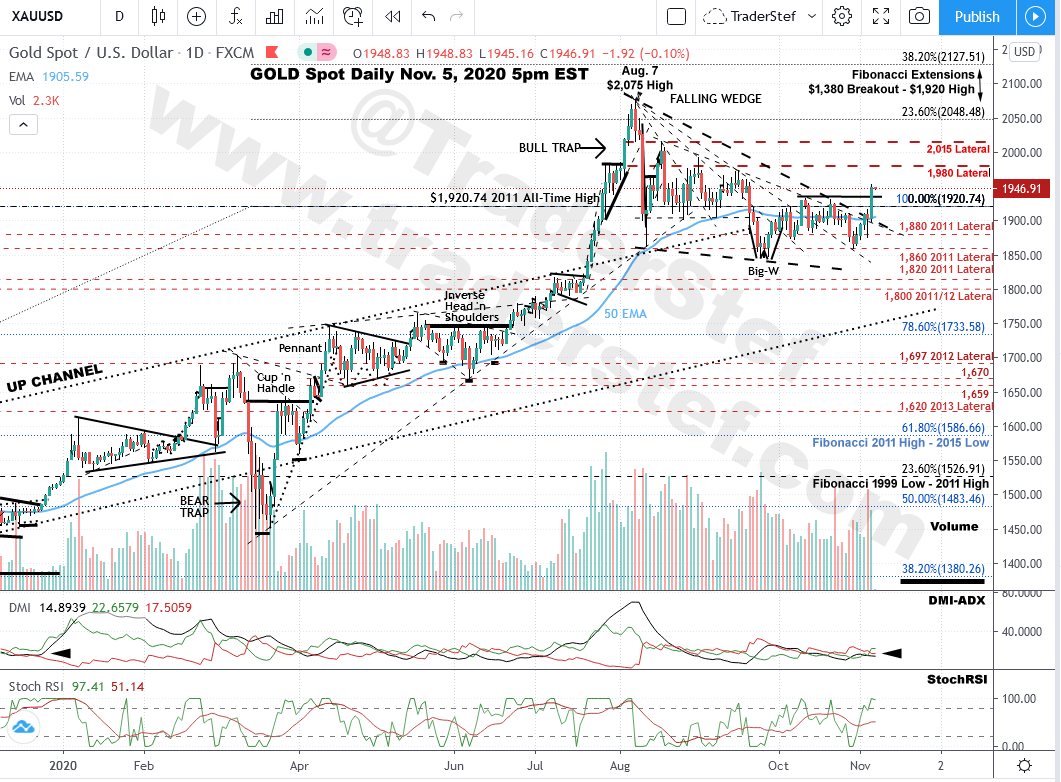 Today’s price action was positive, but gold is not out of the woods despite an extensive period of consolidation since the $2,075 high printed in August. The Big-W double bottom pattern in September was a good sign that the correction was close to ending. A Cup ‘n Handle pattern formed out of the Big-W and failed to break away from the $1,920 level on Oct. 21, which has become a significant level of support and resistance since the pullback started. The $1,860 and $1,880 laterals drawn from 2011 did their job in providing support during volatile price action since August, and they are tied to the hip of the 21 Exponential Moving Average (EMA) support area on the weekly chart.

The dominant pattern is a Falling Wedge and today’s rally breached its topside trendline, the 50 EMA, and the $1,920 level with conviction, but I’m not convinced that this rally to $1,953 is a clean break. The holdup is three-fold. The DMI-ADX on the weekly and daily chart are not yet setup with a bullish Alligator Tongue, the StochRSI and Money Flow on the weekly have not broken out to the upside, and the downward Volume pattern since the Aug. 7 high has not printed a significant trend reversal. After $1,980 is successfully challenged and the indicators noted above improve, the road should be clear for a retest of the 23.6% Fibonacci Extension and beyond. The chart is bullish.

Lastly, “Peak Gold” is reality as the discovery of new gold deposits that are of any consequence is zero. Mine production is also flat as major gold miners are wary of increasing their production from existing deposits despite gold’s record price levels. 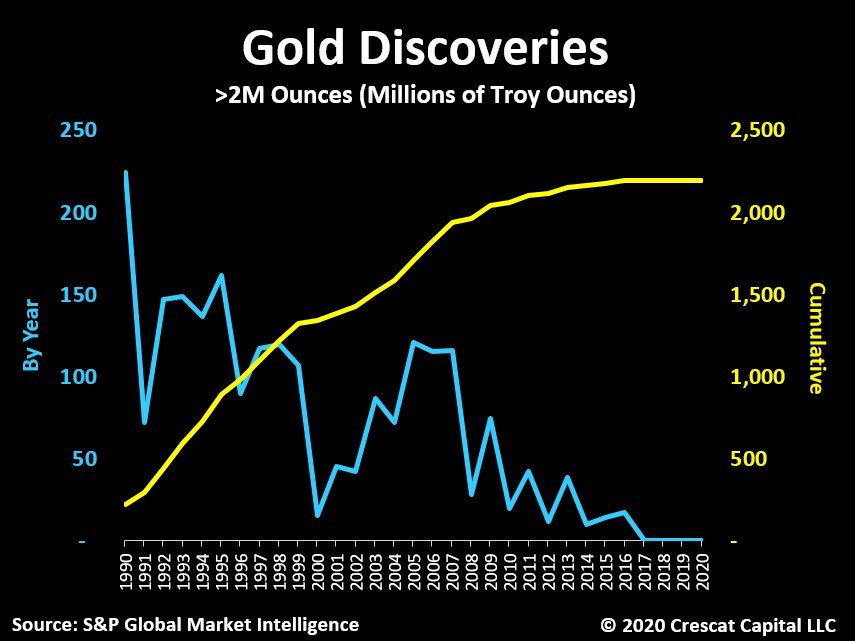