Is the Stock Market Plunge a Fork in the 10-year Pig Party? – Technical Analysis

After a market plunge on Tuesday over fears of a goldilocks recession and the yield curve inversion in the U.S. Treasuries market, another wild day on Wall Street printed the tape as global markets plunged on news of an arrest of the Huawei CFO.  The Chinese executive is being extradited from Canada to the U.S. on charges of violating the renewed sanctions on Iran, and bank fraud for using HSBC Bank as a transaction intermediary.  The arrest threatens to strain an already fragile U.S.-China trade war after a temporary truce was agreed on last weekend during the G20 meeting in Argentina. 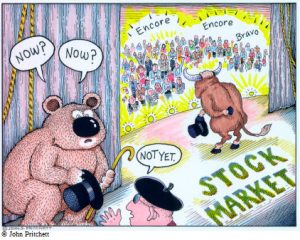 Everyone is wondering if U.S. stock markets have entered a bear market. Is the 10-year Wall Street bull market a forked pig following the recent price action?  Aside from all the precarious economic news that now includes a negative manufacturing orders report  and a spike in the ‘fear index’, it is time for some technical analysis on the Dow, S&P 500, and Nasdaq 100 to see what the charts have to say. All three indices have been extremely volatile since printing their highs in 2018. To view a larger version of any chart, right-click on it and choose your “view image” option. 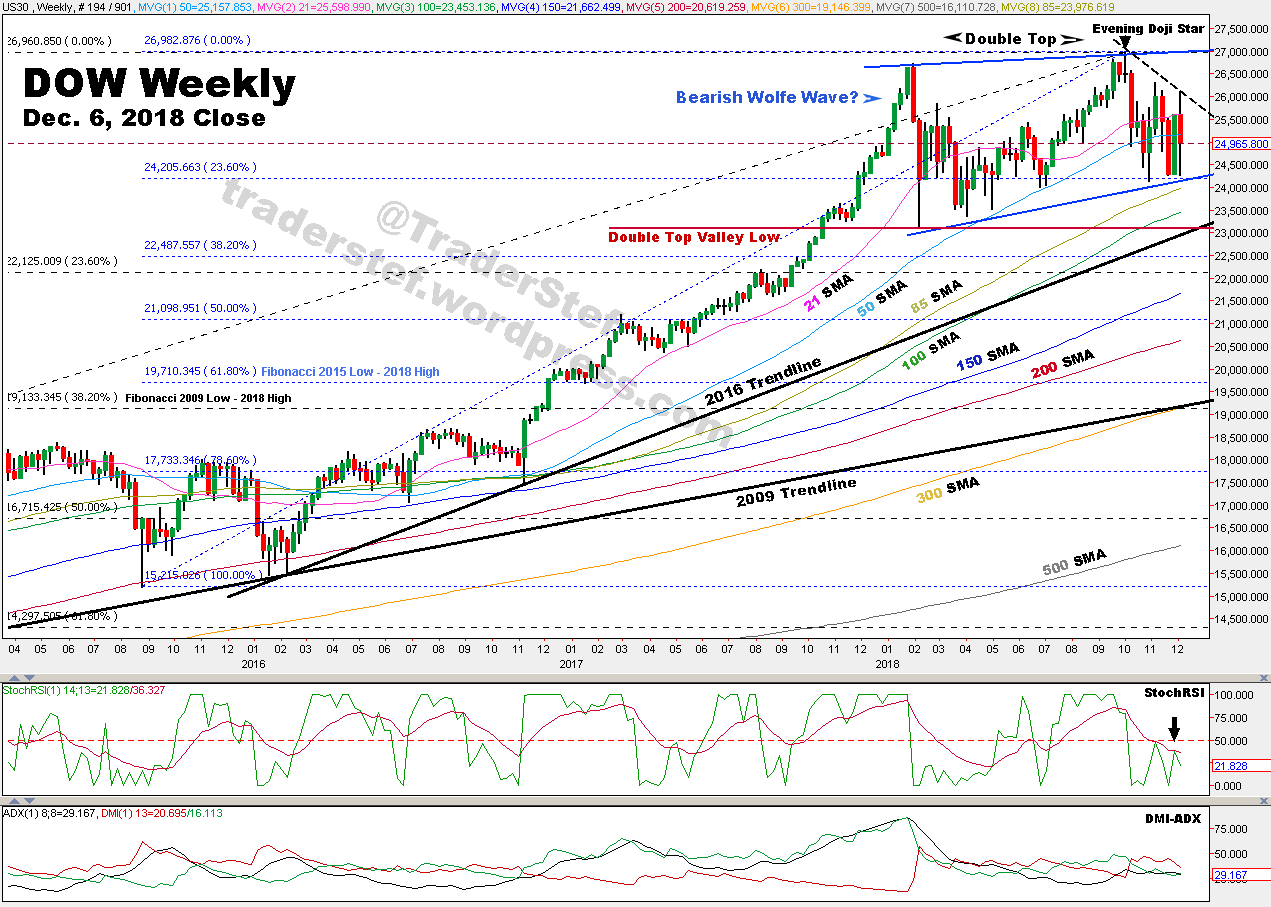 Two potential patterns have surfaced on the Dow.  There is a Bearish Wolfe Wave within the upper and lower blue trendlines.  If the lower trendline is breached to the downside, the Wolfe Wave confirms.  A Double Top has also taken shape within a 3% price range, which includes the 26,698 January high and 26,960 September high marked with an Evening Doji Star candlestick. The Double Top confirms if the valley low at 23,112 is breached decisively to the downside. The 23.6% Fibonacci drawn from the 2015 low is providing support, but the 50 Simple Moving Average (SMA) has been breached to the downside multiple times since October. The StochRSI remains in a negative momentum pattern and the DMI-ADX is negative but indecisive. One study keeping the Dow out of a full-blown bear market is the trendline drawn up from the February 2016 low that has not been touched.  This weeks low is only 1,500 points away from the 2016 trendline and we have already had weekly swings of that magnitude since February.  A decisive breach of the 100 EMA, the Double Top valley low, or the 2016 trendline may lead to a major plunge. 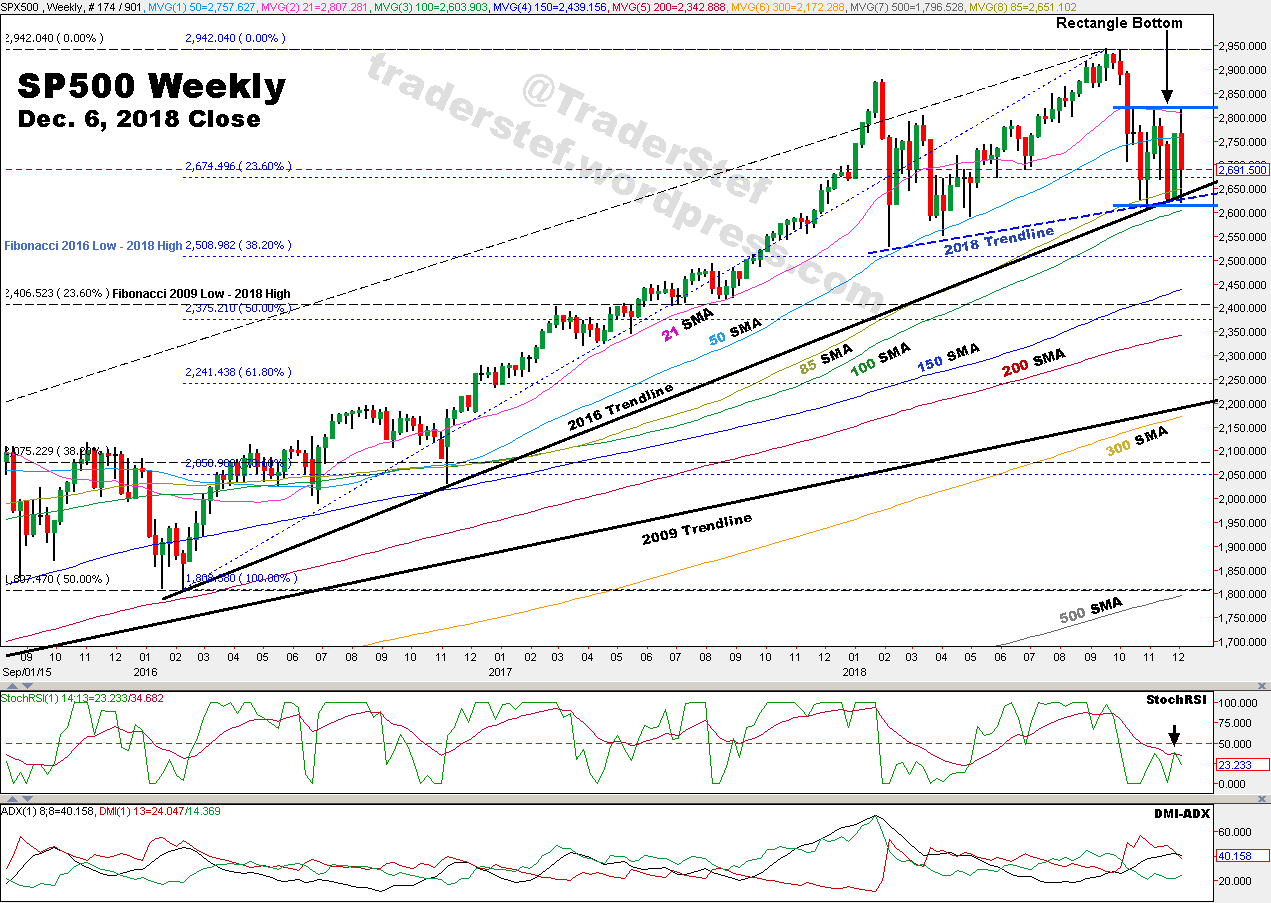 Unlike the Dow, the S&P 500 is already kissing the 2016 lower trendline. There is no Double Top here because the January and September highs are beyond a 3% price spread, but a bearish Rectangle Bottom has taken shape. The 21 SMA is acting as resistance on every price surge to the upside, and a confluence of the 85 and 100 SMA along with multiple trendlines are providing support with the 50 SMA stuck in the middle. The StochRSI remains in a negative momentum pattern and the DMI-ADX is negative but somewhat indecisive. If the 2016 trendline and 100 SMA are breached with conviction, we could have a major plunge on our hands. 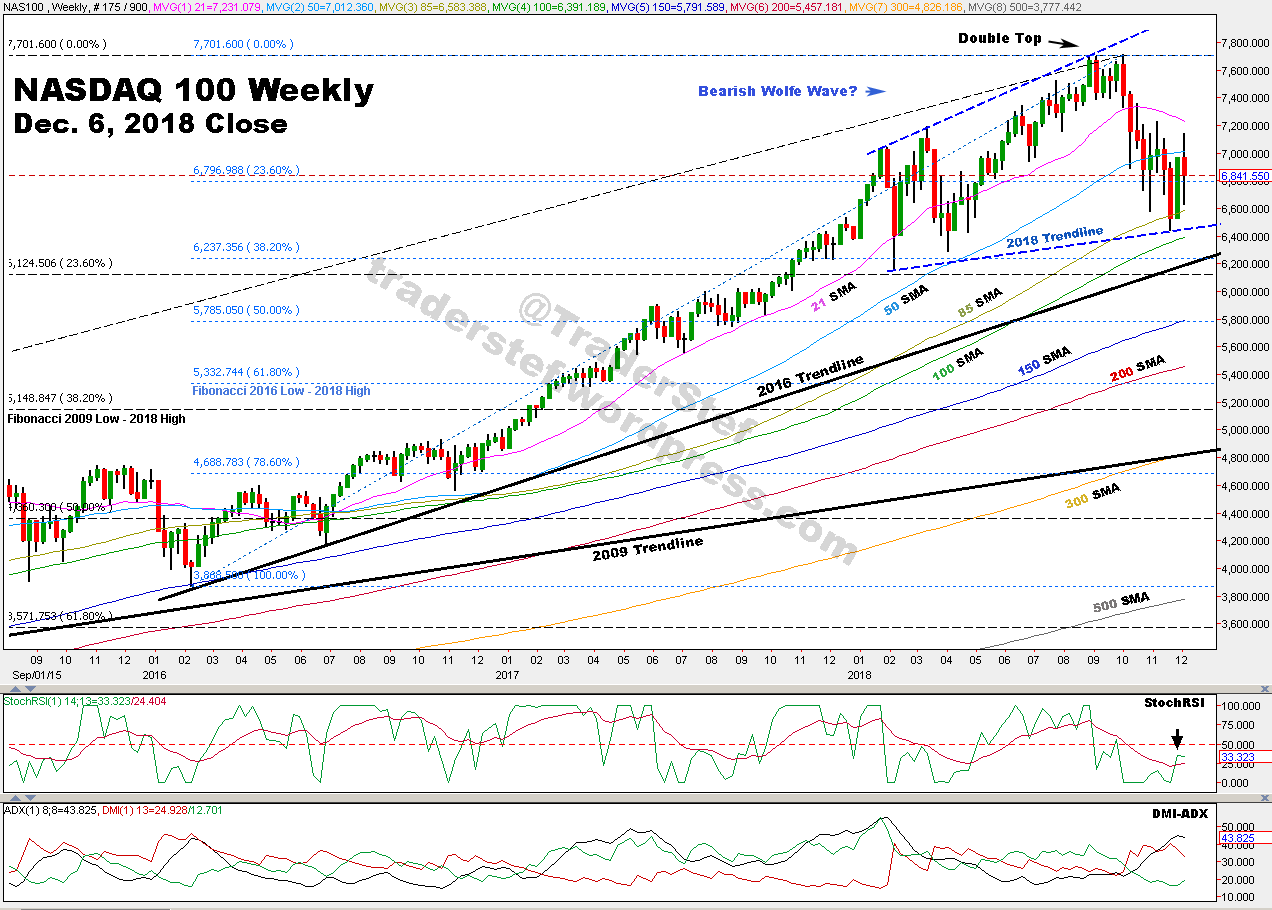 The Nasdaq 100 is similar to the Dow with a Bearish Wolf Wave, but its Double Top is short and tight through August and October instead of spread over 9 months.  The 50 SMA has acted as resistance over the past month and the 2018 trendline and 85 SMA are providing support. The StochRSI is attempting a break into positive territory but the DMI-ADX remains negative. If price breaks down through the 2018 lower trendline and 100 SMA, the 38.2% Fibonacci drawn from the 2016 low and the 2016 trendline are not far off.

Here is an article from the fundamental side of the ledger to close out the analysis.

The Makings of a Global Debt Crisis Are in Place… “In 2017, the financial world was filled with talk of synchronized sustainable growth in major economies for the first time since before the 2008 global financial crisis. This was being proclaimed by global financial elites including Christine Lagarde, head of the IMF. Now that vision is in ashes. Synchronized global growth has turned into a synchronized global slowdown. Growth has already turned negative in two of the world’s largest economies, Japan and Germany, and is slowing rapidly in the world’s biggest economies, China and the U.S.”  – Jim Rickards, Dec. 4

Consider the following if you are stuck in the 20th century and still calling a stockbroker for advice and a trade.

The Sopranos – A Stockbroker takes a Beat Down