In case you missed it, lithium’s mining industry entered a Primary Bull accumulation phase around late summer of 2015.  The price gains prompted questions from the financial press over the past year of whether it’s just Bubblicious or the real deal, like Bazooka.  Some miners have had gains of up to 300%.  Before I give up a few charts, let’s do the due diligence.

What is this element, and why the sudden interest after two centuries since its discovery?

“Some say it was the ancient physician Soranus of Ephesus, who discovered lithium as a treatment for both mania and melancholia. In the 2nd century A.D., Soranus treated manic patients with the alkaline waters his town, which, as we now know, contain very high levels of lithium. From the ancients up until today, bathing in mineral pools and drinking mineral waters, have been popular treatments to promote mental as well as physical health. Who discovered lithium is a hard question to answer because so many early advocates of spas containing lithium knew the water to be beneficial, but had not isolated lithium or identified its specific link to manic depression…  So who discovered lithium? This question has several answers! The person who discovered lithium, in a technical sense, may be Johan Arfvedson, but it was Dr John Cade who discovered the great secret and value of lithium, and Dr Fieve who pioneered lithium’s use in the U.S.” – BiPolar Lives

“The lightest known metal can also lighten your mood.  Lithium, atomic number 3, is an element of many uses. It’s used in aircraft manufacture and in certain batteries. It’s also used in mental health” – Live Science

Lithium is the New Gasoline: “Despite its almost universal acceptance in portable electronic devices today, we believe that the greatest opportunity for lithium-ion batteries lies ahead in the form of transportation applications. In 2014 alone, more than 70 million cars were sold globally, providing an enormous available market for lithium-based batteries. The core material that enables lithium-ion batteries to function is lithium. Today, lithium is commercially recovered from underground brine deposits not too dissimilar to the way oil is extracted from the ground via a well. Similar to converting oil to usable fuels, lithium requires substantial above-ground ‘refining,’ which substantially extends the time from extraction to a commercial product. 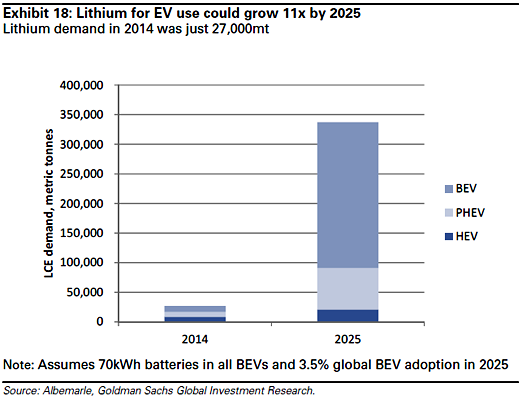 Why it matters? Total lithium demand today is 160,000mt of lithium carbonate equivalent (LCE) per year. We estimate that a 1% increase in battery electric vehicle (BEV) penetration would increase lithium demand by 70,000mt of LCE/year (or roughly half of current global demand for lithium). In order for electric vehicle penetration rates to hit industry forecasts, significant capital investments to expand commercial lithium capacity will be needed, particularly from producers and/or EV OEMs.” – December 2, 2015 Goldman Sachs, Emerging Theme Radar 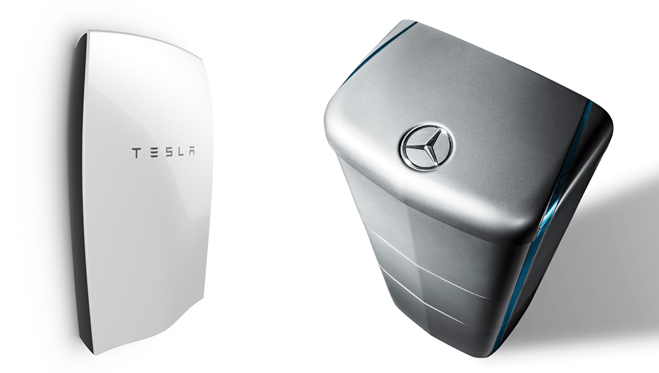 “An increasingly precious metal… The industry is fairly concentrated, which adds to the worry. Last year, Albermarle, the world’s biggest lithium producer, bought Rockwood, owner of Chile’s second-biggest lithium deposit. It and three other companies—SQM, FMC of America, and Tianqi—account for most of the world supply of lithium salts.” – Jan 14, 2016 The Economist

Lithium Boom 2.0 – The World’s Hottest Commodity Just Got Hotter: “Lithium is the hottest commodity on the planet right now, and investors trying to profit from it don’t understand how to invest in it… That’s because in this game, lithium GRADE is the key to profitability… The majors can increase production, but only to a certain degree – and not nearly fast enough to meet growing demand” – June 12, 2017 OilPrice.com

Capital intensity is becoming a new metric to utilize in the brine versus hard rock debate. I don’t think there is a clear answer here, but with the new highs in lithium pricing, the cost curves have shifted…

The growing number of companies exploring and developing Argentinean deposits likely spells consolidation in the future. Despite the voracious appetite for lithium resources by strategic investors in China, there was a sense of caution… the need for extensive due diligence on the creditworthiness of off-take partners was mentioned more than once…

Outside of the traditional supply and demand debates, the potential for recycling of lithium ion batteries and new lithium extraction technologies garnered the most buzz” – June 8, 2017 The Disruptive Discoveries Journal

And the Financial Times chimed in last weekend…

“The growing anxiety about supply comes as the production of lithium remains dominated by a handful of companies: Albemarle, Sociedad Química y Minera de Chile, and Chinese producers Tianqi Lithium and Ganfeng Lithium, which produce from Australia.” 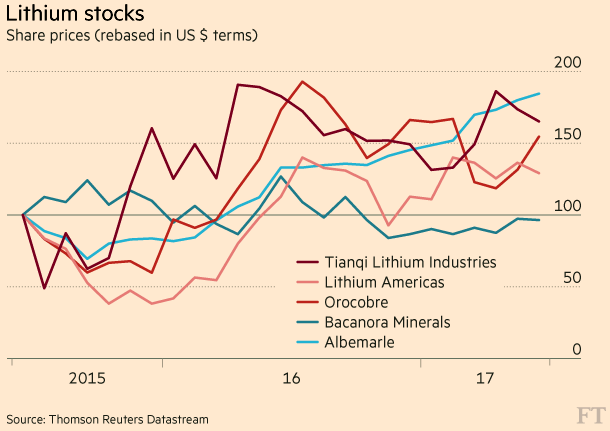 “It will be a healthy market for producers of lithium, but there’s so much lithium to be found on the Earth, there’s no shortage of lithium,” Willem Middelkoop, founder of the Commodity Discovery Fund in the Netherlands, says. Still, supply from new projects has been slow to come to the market. Financing is also trickier because lithium prices cannot be hedged like traded commodities such as copper via futures. “Many people overestimate the simplicity of supply coming on,” says Richard Seville, chief executive of Orocobre, which built the first lithium brine project in 20 years in Argentina.” – June 9, 2017 Financial Times

It’s time to review the technical charts of a few majors in the lithium sector.  All of them have one very important technical indicator in common, a Golden Cross on the weekly.  Expect pullbacks and consolidation along the way. 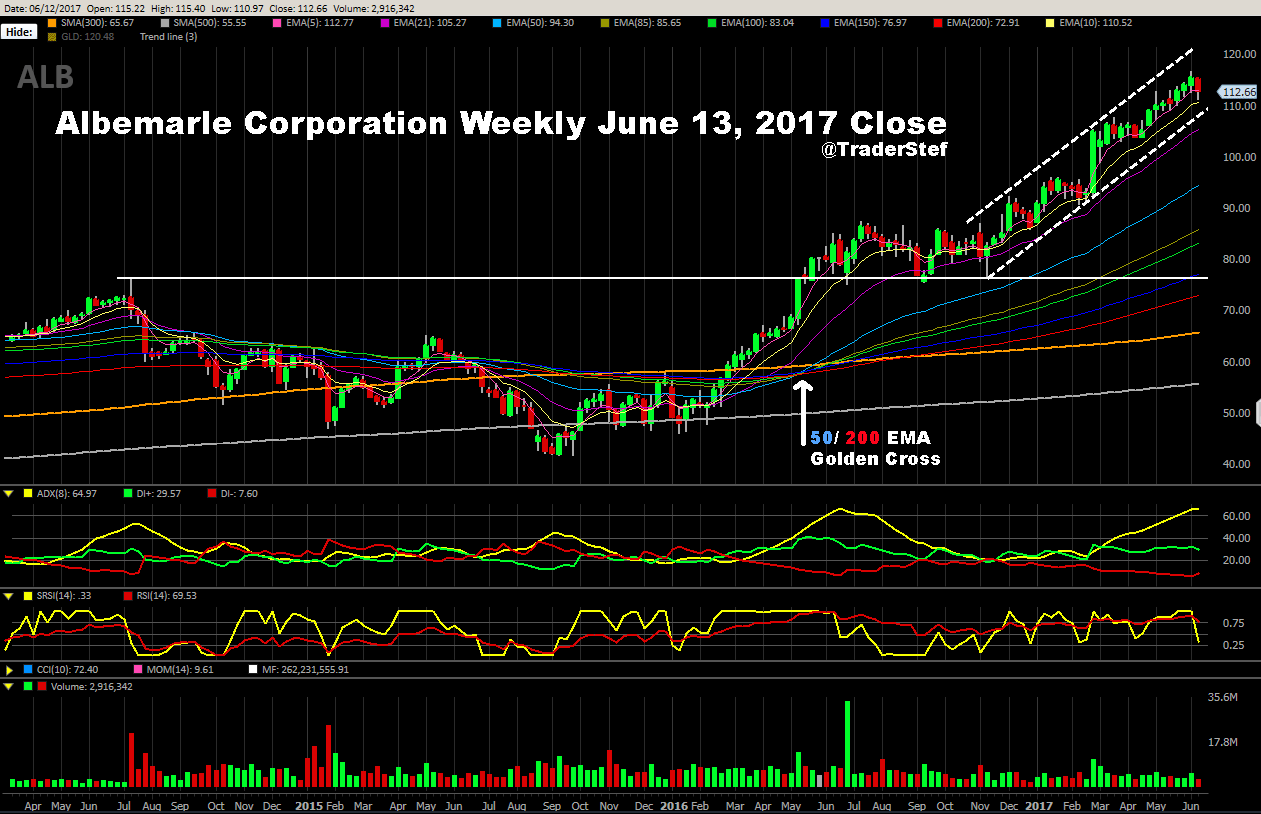 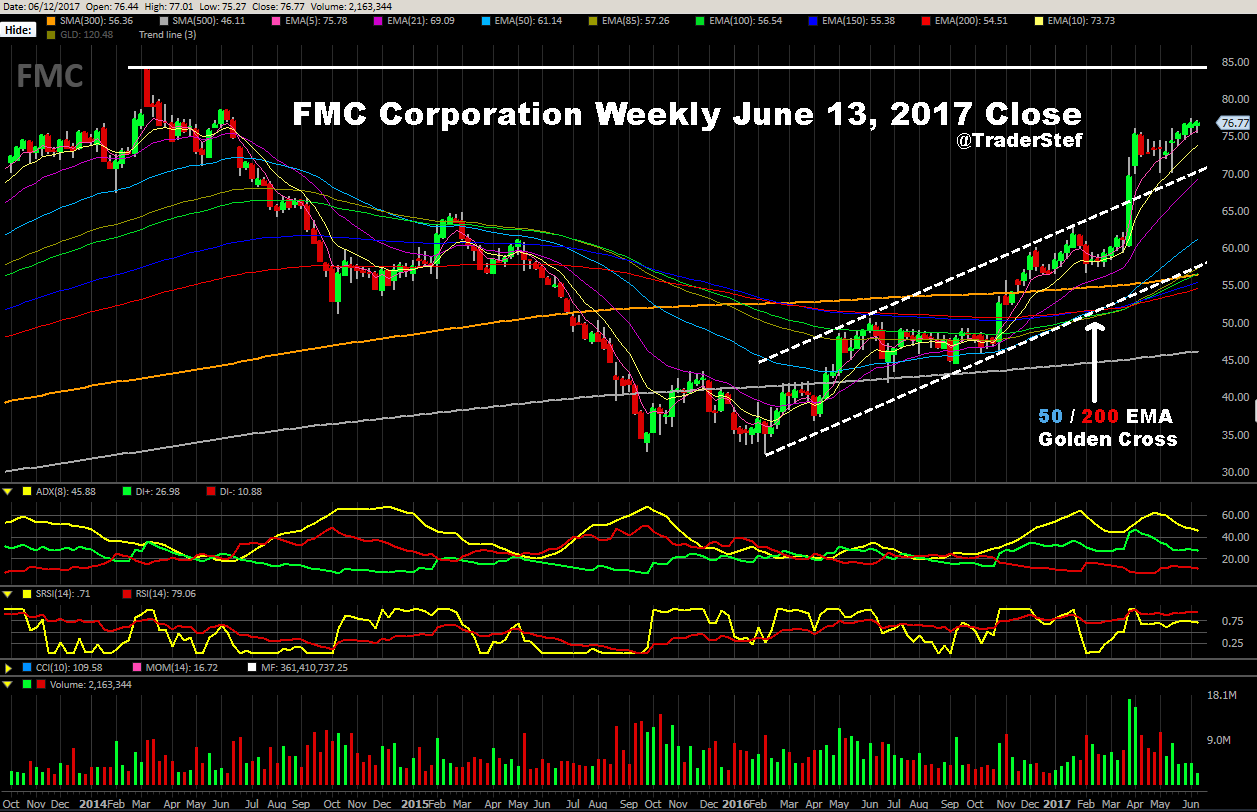 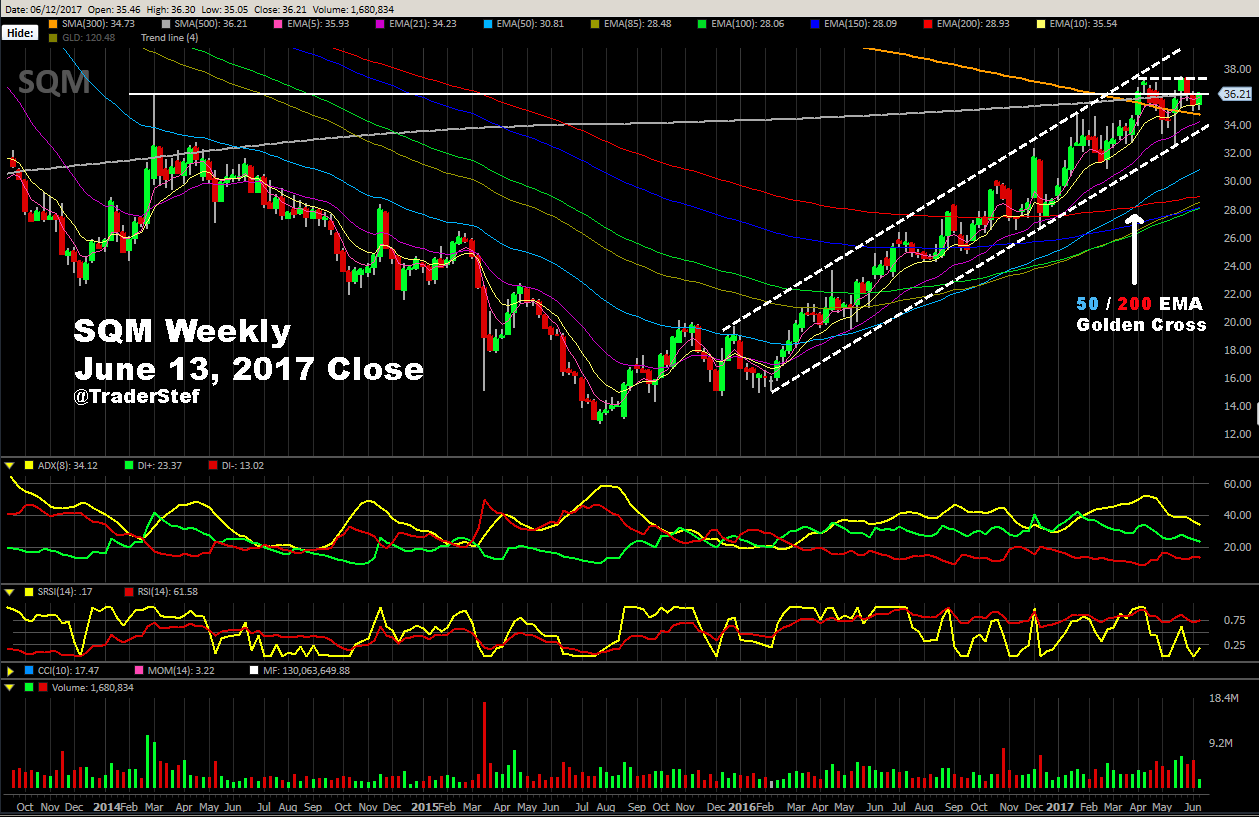