After scanning all the mining stocks, I selected a few to consider from a technical point of view. A few others looked promising but have already extended in price and did not adhere to my selection preferences. My primary filter is high volume of at least 1 million shares on an intraday basis and no dead minutes to ensure tradable liquidity for scalps or swings, and then chart patterns and studies that indicate the potential for a near-term rise in price. The last issue you want is to be sitting on a large block of shares with no liquidity and a bid/ask flow giving you the middle finger because of breaking news or mindless algorithms. 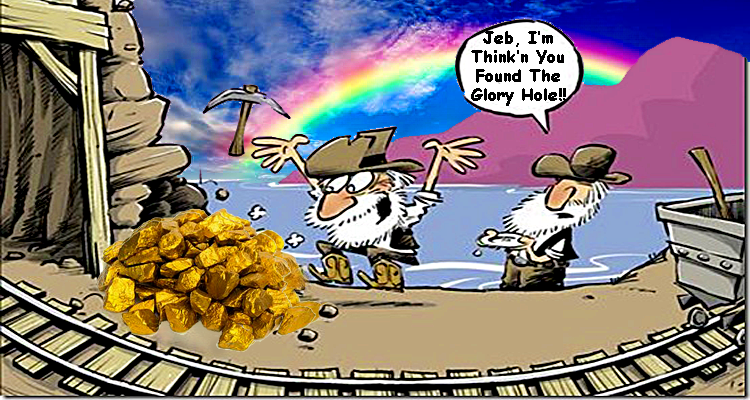 Overall, the miners continue to suffer in price performance despite the recent $300+ gain in the gold price. The mining industry is undergoing a tectonic shift, as major miners are busy with mergers and acquisitions, consolidating resources, lowering costs, and acquiring existing mines with proven reserves and successful exploration programs in a peak gold world. My most recent articles on mining were “The Gold Mining Sector is Retched With a Few Stars” on Dec. 10, 2018, and the “Fake News in Gold” interview on Feb. 5, 2019.

I am diving right into the charts today, as there is a lot to cover. A daily chart for each mining stock will follow its monthly big picture. To view a larger version of any chart, right-click on it and choose your “view image” option.

Buenaventura Announces Resumption of Operations at the Orcopampa Mine… “Peru’s largest publicly-traded precious metals mining company, is pleased to announce that it has resumed operations… The Company is engaged in the exploration, mining development, processing and trade of gold, silver and other base metals via wholly-owned mines and through its participation in joint venture projects. Buenaventura currently operates several mines in Peru.” – Business Wire, Feb. 1 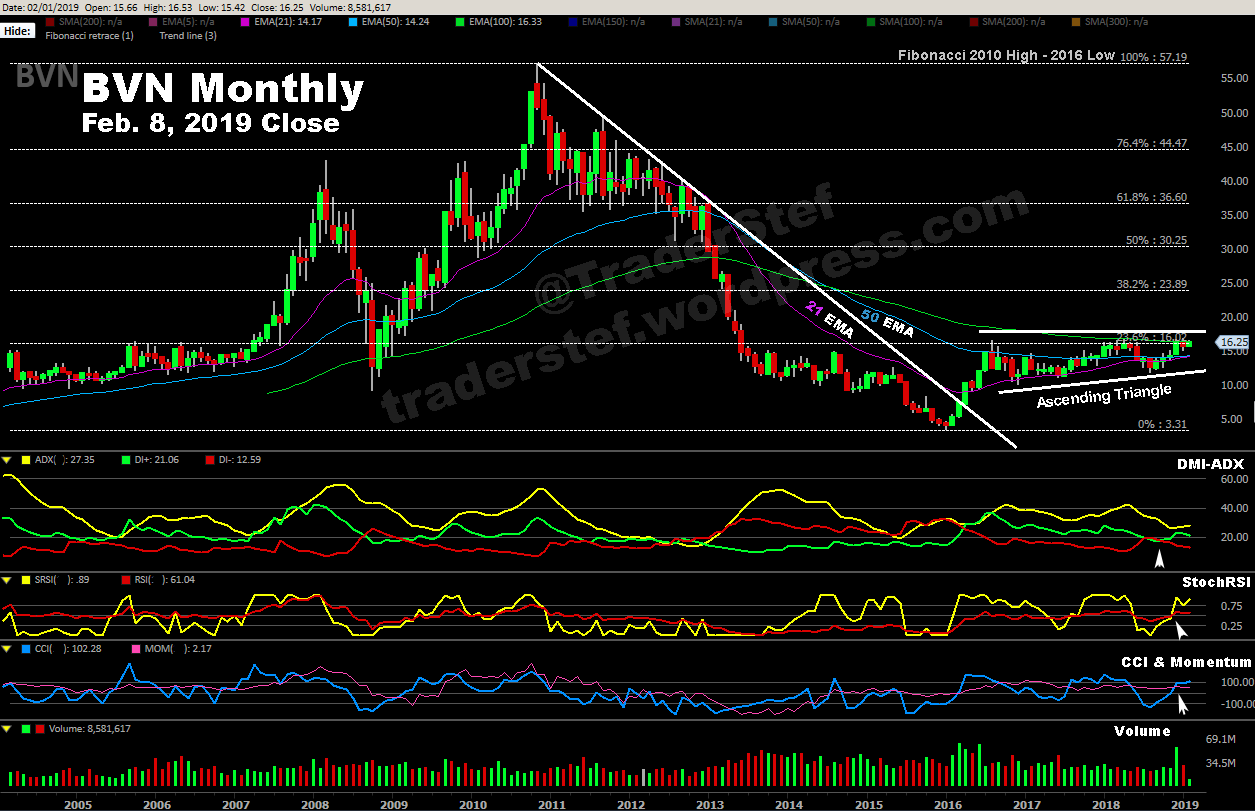 After BVN reached a high of $57.20 in Nov. 2010, its price plunged 95% over a 5-year period and printed a low of $3.30 in Jan. 2016, shortly after gold made its low in Dec. 2015. In Apr. 2016, the price finally had a decisive breakout through the topside trendline drawn back to 2010. During Jul. 2016, the stock rallied to a high of $14.72, where it paused at the overhead 50 Exponential Moving Average (EMA).  In Aug. 2016, another high printed at $16.45, and the price action stopped in its tracks near the overhead 23.6% Fibonacci retrace level.  Since that time, the price chopped sideways, with rising support along the 21 EMA and 21 Simple Moving Average (SMA).  With a series of higher lows and three taps at the overhead Fibonacci, an Ascending Triangle pattern developed while the 100 EMA joined the party to add additional overhead resistance. The DMI-ADX remains positive but indecisive, the StochRSI is giving a near-term bullish signal, and the Commodity Channel Index (CCI) and Momentum (MOM) indicator are steadily rising. With three weeks to go in February, it appears that the volume will at least equal an average of the last two-month totals, and the candlestick pattern looks primed to challenge the Ascending Triangle’s topside trendline. Three taps and you are out, one way or the other. 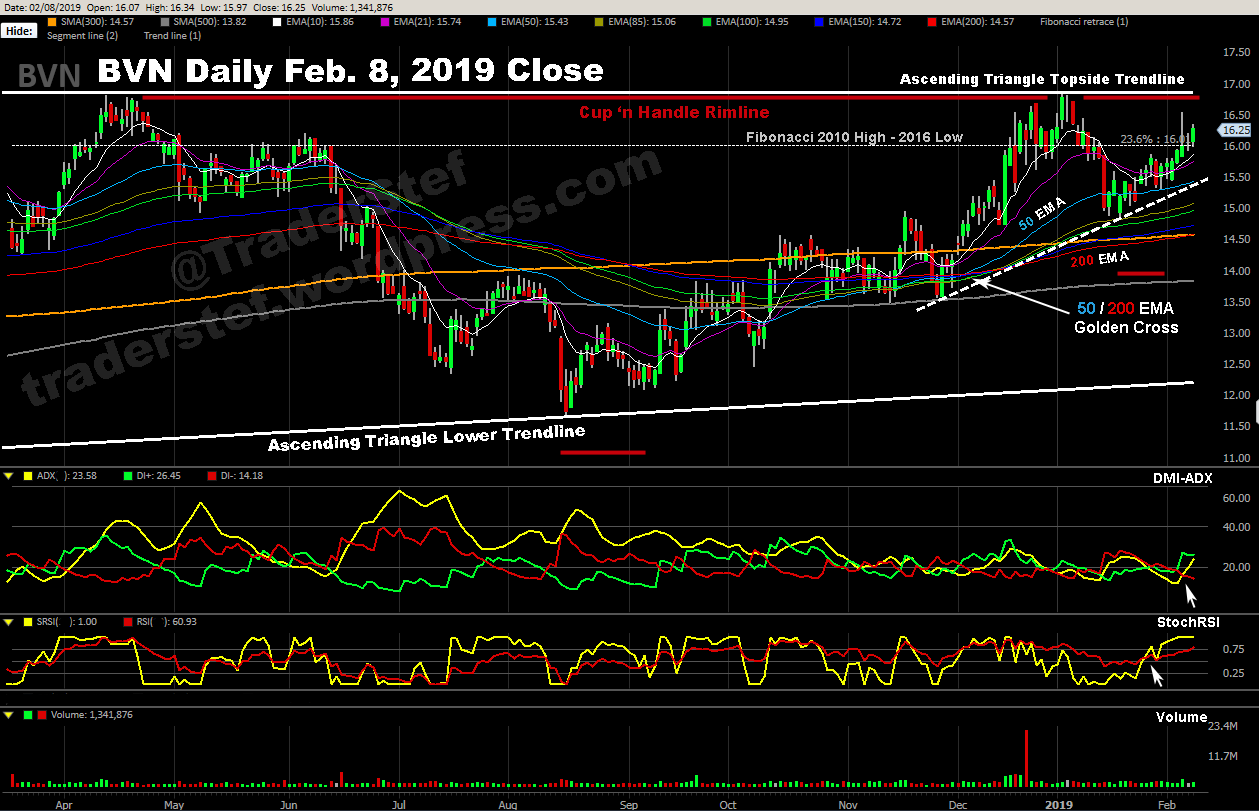 Zooming in on the BVN daily chart highlights a Cup ‘n Handle pattern near the end of an Ascending Triangle, and it comes close to a symmetric Inverse Head ‘n Shoulders continuation pattern aside from its sloppy left shoulder off the cup’s Apr. 2018 high.  All of the moving averages are winding up nicely below the price action and a 50/200 EMA Golden Cross occurred in early Dec. 2018. The DMI-ADX setup has a classic Alligator Tongue and is indicative of building upward momentum. The StochRSI is bouncing along overbought territory due to the rally since mid-January, but it can remain choppy up there for a while. The volume pattern was distorted due to a volume spike of selling on Dec. 21, 2018, but the same weekly candle printed a huge buy volume spike that carried the price higher over the following 2 weeks. I am bullish near-term, with caution until the Ascending Triangle’s topside trendline is taken out with conviction. The next price target will be the 38.2% Fibonacci level near $24.

Sandstorm, a gold streaming and royalty company, currently holds a Zacks Rank #2… “Shares of Sandstorm have outperformed its industry. Earnings are expected to grow 78.6% for 2019. Earnings estimates have moved up 8.3% for the current year over the past 60 days.” – Zacks Equity Research, Feb 7, 2019 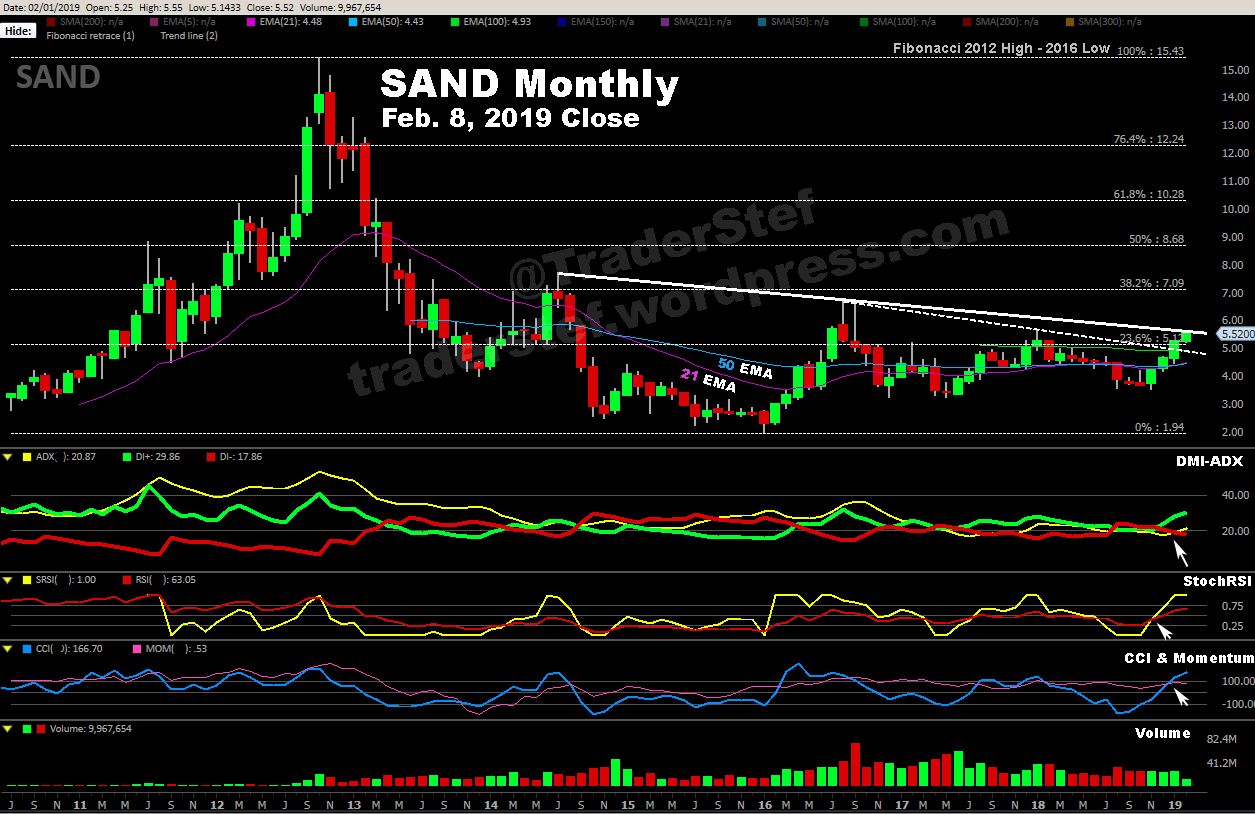 After SAND reached a high of $15.43 in Oct. 2012, the price plunged 88% over a 3 1/4-year period and printed a low of $1.94 in Jan. 2016. The stock rallied to a high of $6.75 by Aug. 2016, then chopped sideways along the 21 and 50 EMAs until Dec. 2018 when the price pierced through the 100 EMA and breached the secondary topside trendline drawn back to the 2016 high last month and broke above the 23.6% Fibonacci level this month. The price is now challenging the last overhead downtrend line drawn back to the Jul. 2014 high. The recent price action on the monthly is screaming “let me out.” The DMI-ADX setup has a classic Alligator Tongue and is indicative of building upward momentum, the StochRSI has just begun to tap overbought levels, the CCI and MOM are steadily rising, and the buy volume for February is shaping up to equal or exceed the prior three months. This is another “three taps and you are out, one way or the other” scenario. If the final downtrend line is taken out with conviction, the next target is the 38.2% Fibonacci level at $7.09. 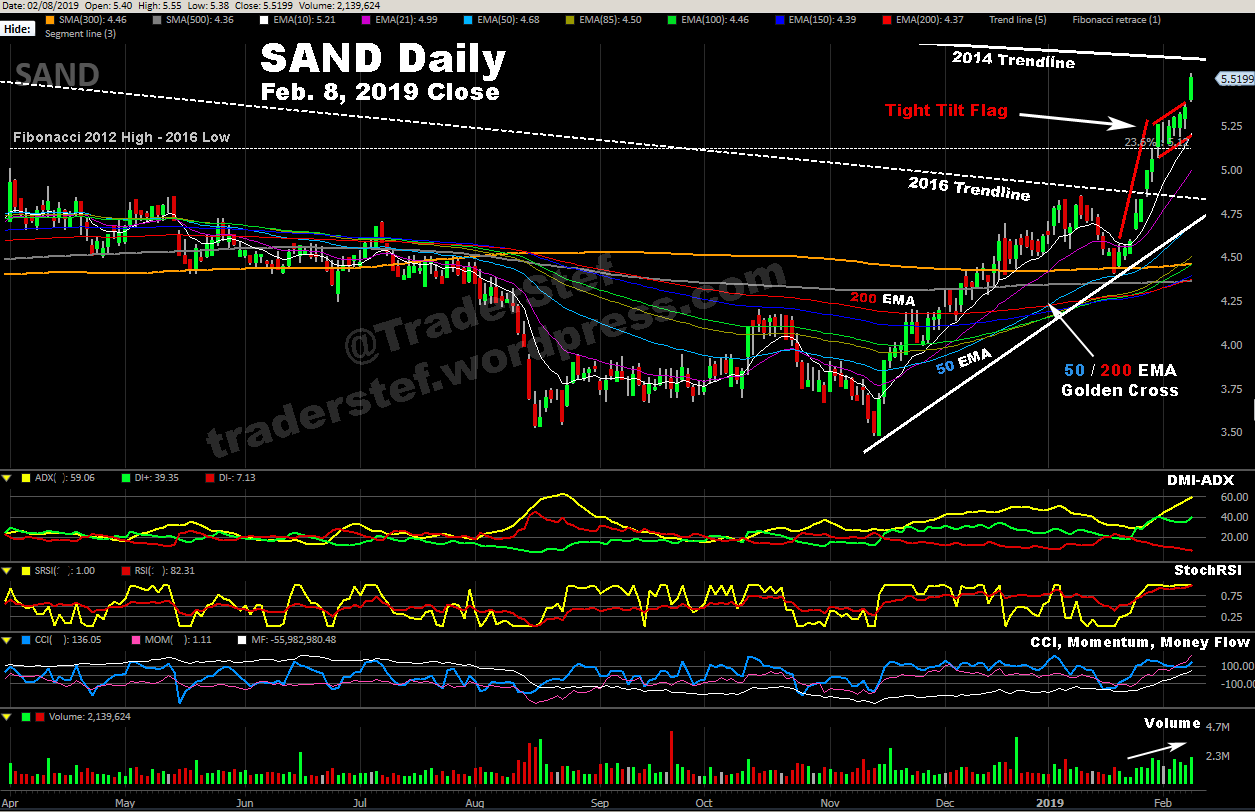 The 50/200 EMA Golden Cross and rising buy volume pattern on the daily chart stand out like a sore thumb. The chart took the hint by printing a Flagpole with a Tight & Upward Tilted Flag through the 23.6% Fibonacci, and the price blew out of the flag last Friday, Feb. 8. The overhead downtrend line drawn back to 2014 will determine whether this rally continues in the near-term or takes a breather before an attempt to reach the 38.2% Fibonacci level at $7.09. All of the moving averages are winding up nicely, the DMI-ADX has some life to the upside left in it, the StochRSI is plastered against the 100% overbought ceiling, and the CCI, MOM, and Money Flow continue to trend upwards. The price action could get volatile, so at this point I remain bullish in the near-term, but with caution until the 2014 downtrend line is breached on buy volume that meets or exceeds the amounts seen throughout February.

Sibanye-Stilwater – Sibayne Gold Limited merged with Stillwater Mining in the first half of 2017:

Lonmin to delay 12,600 job cuts as conditions improve… “The platinum miner is in the process of being taken over by Sibanye-Stillwater in a deal that would make Sibanye the second largest platinum producer in the world.” – Fin24, Feb. 8 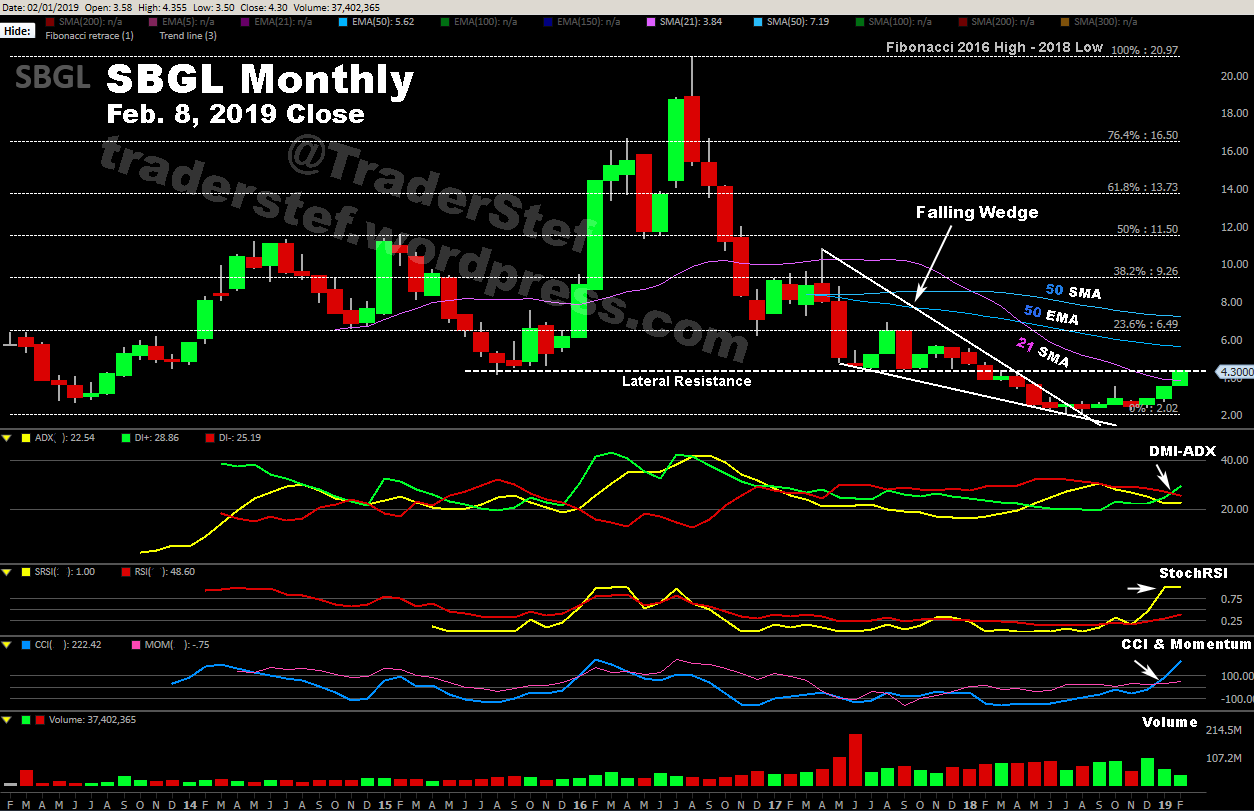 After SBGL reached a high of $20.97 in Aug. 2016, the price plunged 90%+ over a 2-year period that included a 15-month Falling Wedge to end the fall with a $2.02 low in Aug. 2018. The price pivoted back to a lateral resistance level drawn back through 2017 and 2015 that equals the $4.30 close on Feb. 8. The 21 EMA and SMA are in the process of being taken out this month, the DMI-ADX is attempting to form an Alligator Tongue setup, the StochRSI is stoked, and the CCI and MOM continue to trend upwards. The buy volume fell off in Jan. 2019 compared to Dec. 2018, but the volume is already more than halfway to matching January this month. If the lateral resistance is taken out with conviction on volume, the next targets are the overhead 50 EMA near $5.70 and the 23.6% Fibonacci level at $6.49. 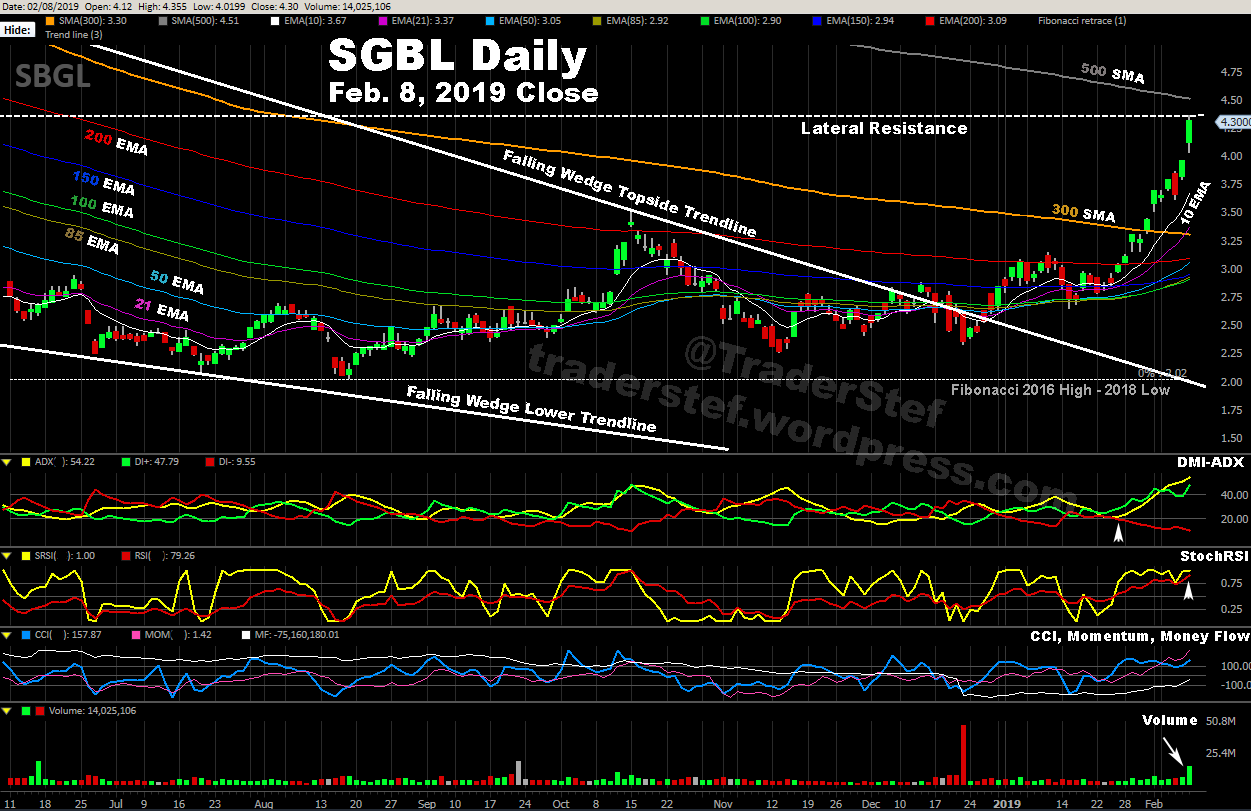 The daily chart highlights the Feb. 8 candlestick that stopped in its tracks at the overhead lateral resistance. The 500 SMA at $5.34 is the last moving average above the current rally, sitting just above the overhead resistance line. A 50/200 EMA Golden Cross is only a stone’s throw away. The DMI-ADX may appear to be toppy relative to the recent past, but the ADX has only printed a 54.22 thus far and is not considered seriously overbought until reaching 80. The StochRSI is already riding along overbought territory. The CCI, MOM, and Money Flow continue to rise and the daily volume at the close on Feb. 8 was stellar. It is obvious that this chart is due for a breather, and soon. As noted on the monthly, if lateral resistance is taken out with conviction on volume, the next near-term targets are the overhead 50 EMA near $5.70 and the 23.6% Fibonacci level at $6.49. 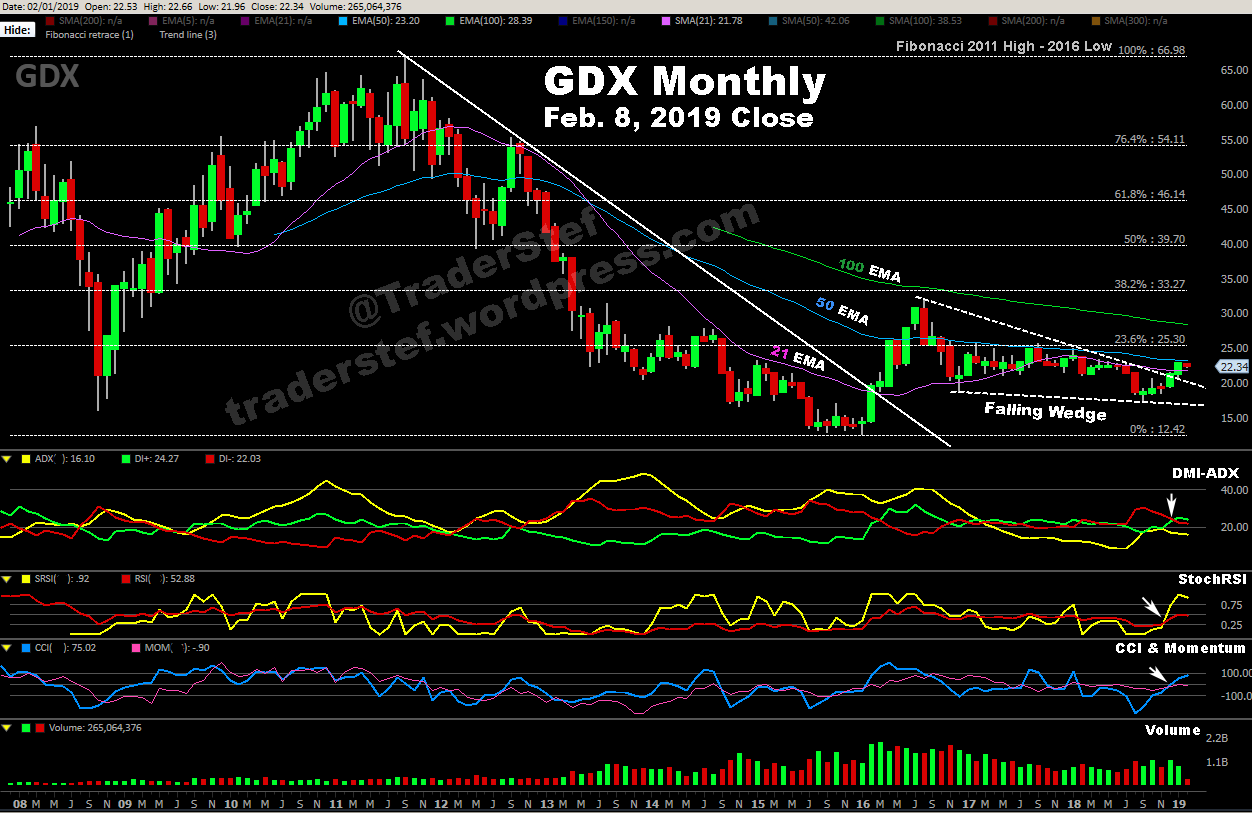 “The monthly chart provides a much broader view back to the 2011 highs. The Falling Wedge is clearly visible. The StochRSI is attempting to break out topside, but we cannot judge the underlying volume until the end of the month.”

After GDX reached a high of $66.98 in Sep. 2011, the price plunged 88%+ over a 4 1/4-year period to end with a $12.40 low in Jan. 2016. The price pivoted to a high of $31.79 by Aug. 2016, then formed a Falling Wedge until its topside trendline was breached in Jan. 2019. The Dec. 2018 monthly buy volume reversed the StochRSI into a positive trend as the price began to exit the Falling Wedge and made a final push upwards in January. The DMI-ADX also reversed to a positive stance vs. negative, but it remains indecisive. The overhead 21 EMA and SMA were taken out with hesitation and the 50 EMA is now resistance. The buy volume will need to come back to life for the price to breach the 50 EMA and rally to the 23.6% Fibonacci at $25.30, which is where previous attempts have failed over the last 2 years. 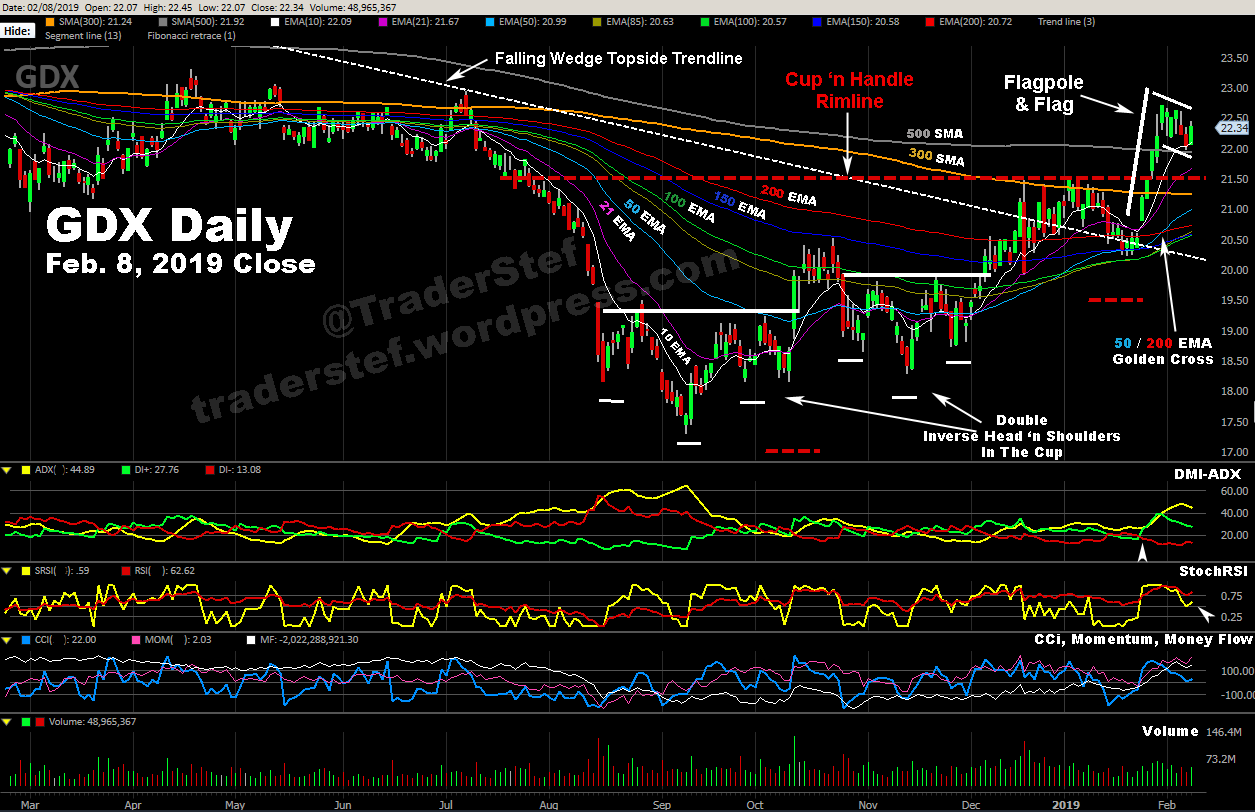 “The double Inverse Head & Shoulders pattern built off the August low is an interesting development that indicates steady accumulation. The price breached the neckline of the second Inverse Head & Shoulders last Friday and tapped the overhead 200 EMA today with a high of $20.55 and a close at $20.13. The price is now within striking distance of the topside trendline of a Falling Wedge (see monthly chart) drawn back to 2016. That trendline must be taken out with conviction in order for a rally to challenge lateral resistance at $23. The DMI-ADX study is setting up a classic Alligator Tongue with positive momentum just like ABX, and the StochRSI is breaking out topside with healthy volume on the buy side.”

After the Falling Wedge’s topside trendline was taken out, the 300 SMA became an area of continued resistance. The price rolled over and retested the 50 EMA, where it pivoted and quickly formed a Flagpole & Flag pattern, which completed the handle for a Cup ‘n Handle. The Flag is consolidating above the 500 SMA, which was the last moving average to remain above the price action until Jan. 30. The 10 EMA remains under the candlesticks at the end of the Flag, and a 50/200 EMA Golden Cross occurred at the peak of the Flagpole. The DMI-ADX remains in a positive trend, the StochRSI is hesitating, and the CCI, MOM, and Money Flow continue in an uptrend. As noted on the monthly, the buy volume will need to come back to life for the price to breach the 50 EMA and rally to the 23.6% Fibonacci at $25.30. 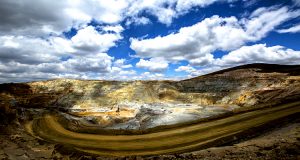