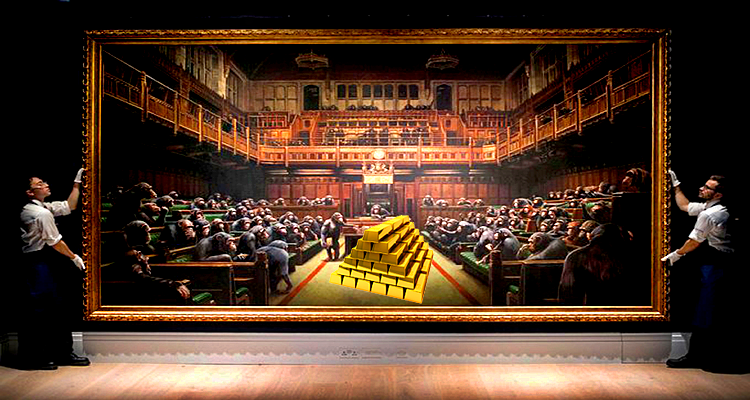 If you missed my recent analyses on the price advance of gold, I suggest you review “A Silver Note and the Screaming Gold Rally Pauses After the Dog Days of Summer,” published on Aug. 31, “Savvies Were Aware of the Near-Term Risk for a Pullback in Gold and Silver,” published on Sep. 7, and “Gold Gamblers Spoofed Into RICO Prison,” published on Sep. 22. There was no major change in the CFTC’s Commitments of Traders (CoT) report data on Oct. 8, as there is a standoff of sorts over the last several weeks without a major shift in positioning vs. the price trend, so I will not cover the CoT today.

I find the intermittent blindness that permeates a small contingent of the precious metal punditry to be quite stunning and comical. It cannot have its cake and eat it too. On one side of the mainstream ticker and social media sandbox, we have financial headlines such as “China Trade Intrigue, Algos React to Old Mo and Spread News” that casually attribute the endemic algo-driven flow of capital as mere passing moments in a benevolent ether.

“Again, hooray. Yet who can deny that there was indeed a speculative nature to this action? Who can deny that as high-speed algorithms are where the volume is in 2019, and that while many of these algos are designed to react instantly to headline news, while others game the momentum? Well, there was plenty of momentum, as well as plenty of headlines to key in on late Friday. I remain not quite negative, but unconvinced.”

On the other side, we have unabashed whiners experiencing mental breakdowns with each and every inevitable price breather that gold and silver must take, and they have suddenly jumped onto a new algorithmic conspiracy hayride. The Banksy monkeys can see what the peasant monkeys do.

Just like the global warming cultists that converted to a “climate change” catchphrase after facts caught up with the conspirators and chiefs, the troll farm and “blame anything but the obvious” crowd that existed well before Greta’s “how dare you” meme, has adopted that brand of hysteria after a DOJ spoofing indictment for gambling within the institutionalized digital spaghetti. The wired angel hair of modern automated trading platforms that regurgitate algorithmic mayhem laden with machine learning AI, HFT, and dark pools took root and matured a decade before the SEC or DOJ had an epiphany to finally grow a pair and recognize the weather patterns of modern trading technology.

The weather of our Sun in relation to earthbound cyclicality is primarily responsible for climate fluctuations on Earth. The theory that man can finitely control such a complex system by eliminating cow farts and implementing social schemes that are designed to tax you until death do us part as globalists thrust their surveillance state upon us is foolhardy ignorance. A similar level of complexity now exists within the interconnected global financial system that transcends nanosecond moments. To theorize that the minuscule precious metal pricing mechanism within a global financial monstrosity is infinitely controllable beyond human nature as capital flows follow the path of least resistance is bordering on a misled insanity.

Technocracy has unwittingly unleashed a self-aware contemporary Hal upon the financial markets, and we are forbidden by our biology to join as a member. The machine-learning club does not care about your feelings or assumptions of what any particular asset, equity, or market should do, no matter how deep an in-the-know access may consider itself.

However, you do have the beauty of fusion/technical analysis at your disposal, which is an extremely powerful tool to view the forest beyond the trees, and it is a learnable skill rather than chasing the manipulation ghosts that pad the wallets of hucksters due to your undivided attention and patronage.

On another note, I suspect that the geopolitical battle with Turkey may have the potential to blow gold through the roof if the situation opens a Pandora’s Box.

Let us move onto the technical analysis on gold. To view a larger version of any chart, right-click on it and choose your “view image” option. 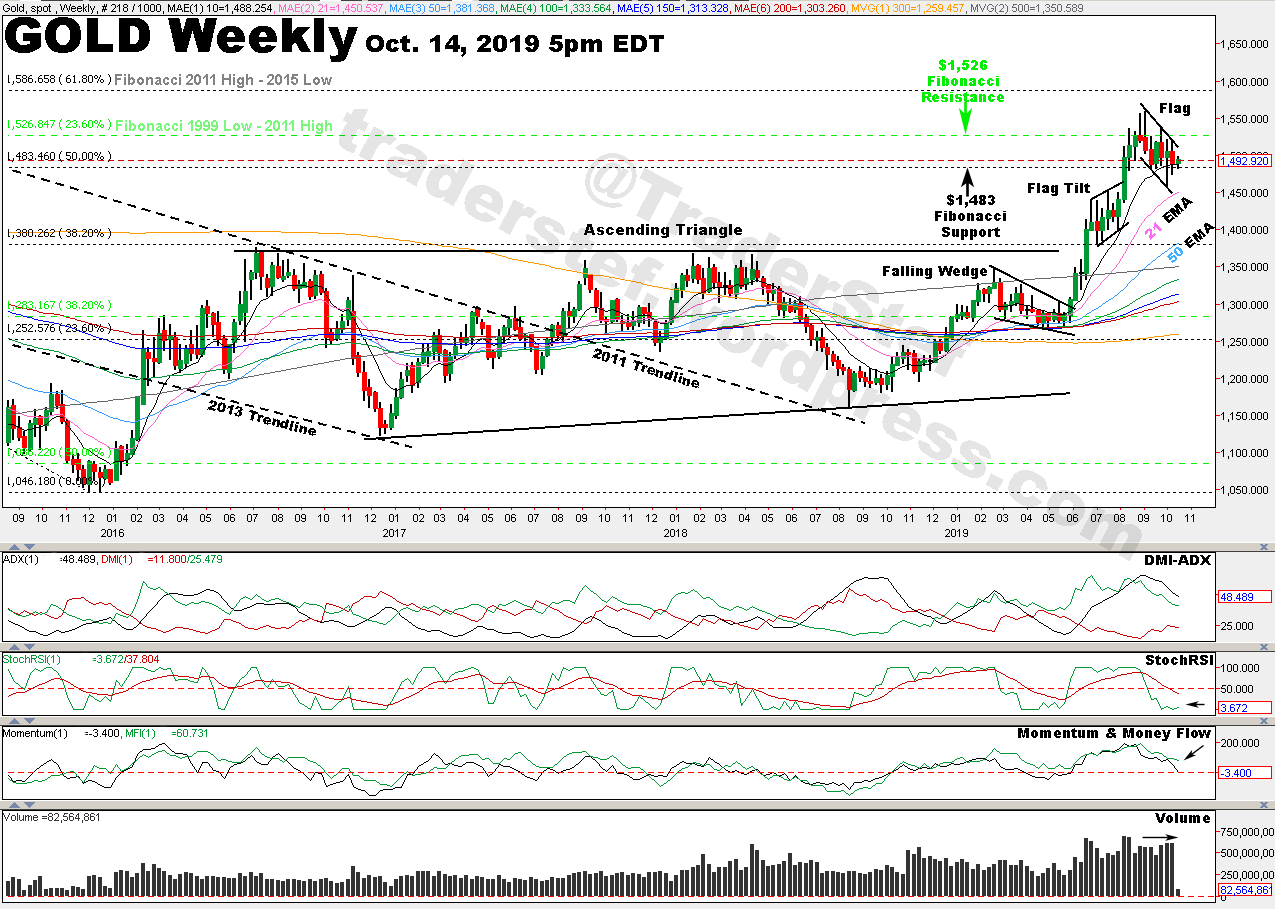 “…since the Aug. 2018 low and powerful rally that began in Jun. 2019, added a respectful $396.79 (+35%) to the price of gold… Overall, the chart remains bullish with an intact uptrend despite a $54.46 price retreat. Even if the price falls an additional $20, no serious technical damage will have taken place. However… the next support level extends back into the price chop of the previous Flag Tilt. I remain bullish long-term, but caution is warranted in the near-term.”

“The candlestick setup dominating the chart is a Three Outside Up, which is indicative of a bullish reversal 75% of the time. As noted in the Sep. 7 analysis and subsequent charts posted on my Twitter feed, the Falling Wedge has based out and began to pivot up and away from a confluence of the $1,483 Fibonacci, 50 EMA, and lower trendline of the Up Channel. As of Sep. 20, the price action cleared the 10 and 21 EMA resistance with a $1,515.34 print at the close. The $1,526 Fibonacci must be breached again on volume in order for the price to retest the $1,557.06 high at the peak of the Falling Wedge, which will clear the way for a challenge of the $1,586 Fibonacci level… I remain bullish long-term, but caution is warranted until the $1,557 level is taken out with conviction.”

A Falling Wedge that is nested within the current Flag drawn on the weekly chart above, can be seen on the daily chart, which provided a short-term scalping opportunity off a pivot low of $1,483 to $1,535. Traders that follow intraday price action capitalize on those movements. As warned about in the Sep. 20 analysis, the potential for a $20 retreat did occur with a break below the $1,483 Fibonacci on Sep. 30 and Oct. 1, but no major technical damage occurred to the uptrend.

A pattern that has developed on the weekly chart since the Sep. 4 high is a bullish Half Staff Flag. The price action has consistently closed above the $1,483 Fibonacci level and 10 Exponential Moving Average (EMA) and below the $1,526 Fibonacci on a weekly basis since Sep. 10. The 21 EMA is sitting at the $1,450 level and remains in an upward tilt at this time. The 21 EMA is also at a lateral support area near the highs of the recent Flag Tilt. The DMI-ADX remains positive but with a downward trend, the StochRSI is basing out, the Momentum and Money Flow indicators continue to rollover, and the Volume is steady with no definitive trend vs. the choppy price action.

I remain bullish long-term, but caution is warranted until the $1,526 is taken out with conviction and the $1,586 Fibonacci level is decisively challenged. 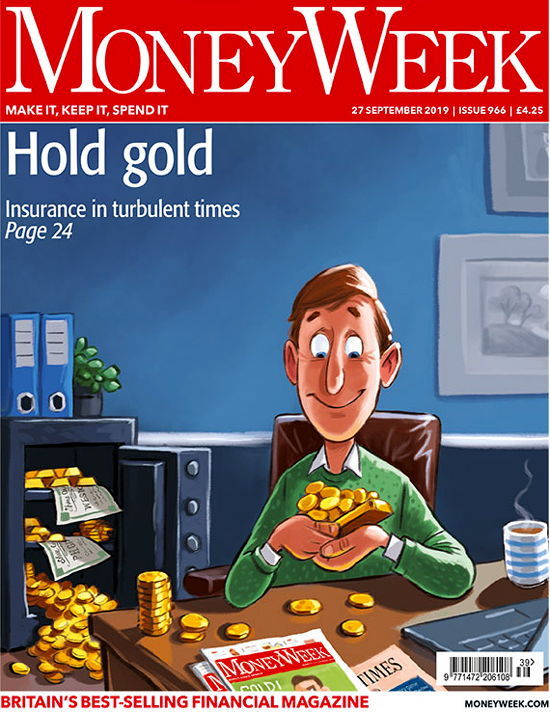 Russia says exploring settlement in euros, roubles for energy exports… “Russian Economy Minister Maxim Oreshkin said the country is considering alternatives to the U.S. dollar for energy transactions… ‘We have a very good currency, it’s stable. Why not use it for global transactions?’ Oreshkin said in an interview with the Financial Times on Sunday. ‘We want (oil and gas sales) in roubles at some point… The question here is not to have any excessive costs from doing it that way, but if the broad financial infrastructure is created, if the initial costs are very low, then why not?’” – Reuters, Oct. 13

“Interesting to see Bank of China’s General Manager in London has joined the LBMA Board. Chinese control of the gold market spreading into OTC forwards, and from LBMA’s perspective realistic protection of its market position. Replaces JPMorgan rep charged with manipulating PMs.” – Alasdair Macleod, Oct. 14

Monkey With An AK-47 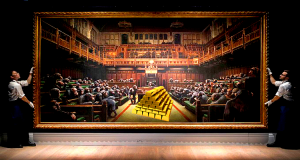