It has been an explosive rally to watch, participate in, and study the nuances of bullish chart dynamics. For some folks, even when the chart and fundamentals handed you an opportunity on a silver platter with a heads-up well in advance, they reminisce over old and bearish price predictions pulled out of spooky closets and wait for the next cyclical breather in the price action to complain about manipulation ghosts. Coincidentally, the gold price is fast approaching another window of price consolidation before it can successfully break out to new all-time highs.

Financial markets are no longer manipulated by governments in the shadows, but are bullied around by global automated platforms, high-frequency trading, and algorithms with an interconnected market, which it is next to impossible to control the big picture outcome. The old-school method of picking up a phone and fixing a price was history well over a decade ago, and the SEC was clueless as brokerage houses and rogue traders graduated to high-tech spoofing gambles, rather than banker conspiracies to “fix” an equity, commodity, or currency price. I am working on an article to explore that story. Here is one recent example of what is occurring instead of a government wizard or central bank spook pulling your chain.

From the old and bearish price prediction closet, we have Harry sparking a ruckus amongst fellow precious metal geeks by reviving his $700/ounce price target. I can never say never because a rogue algorithm is capable of causing a flash crash in any asset or stock exchange, but from a technical and fundamental analysis standpoint, the odds of such a price in gold today is near zero.

Bill Holter’s Commentary… Harry Dent gets stuffed again only one day after pontificating…I don’t think he will need much time to see $1,525 in the rearview mirror, then maybe he withdraws his “$700 and possibly $250” gold forecast? I have publicly requested several times we debate the facts, and nothing but crickets from him. I know I am not “Harvard trained” and instead only went to the school of hard knocks and common sense but I renew my offer to debate the economic/financial facts. I will accept anyone he would like as moderator…what do you say Harry? – Jim Sinclair’s Mineset, Aug. 15 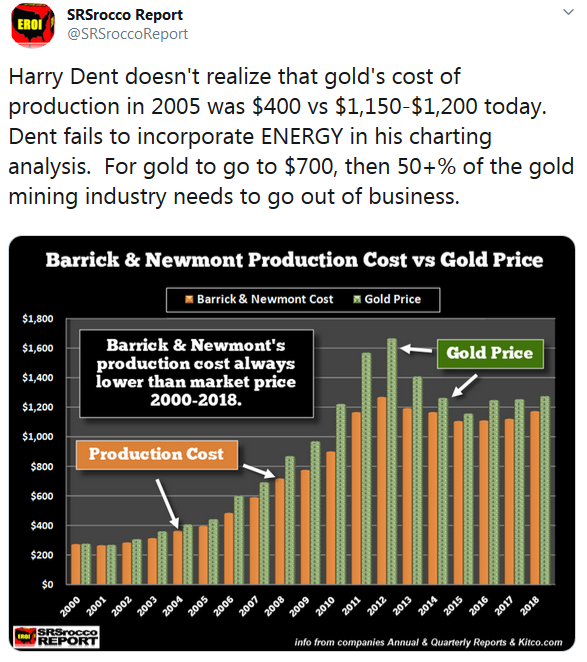 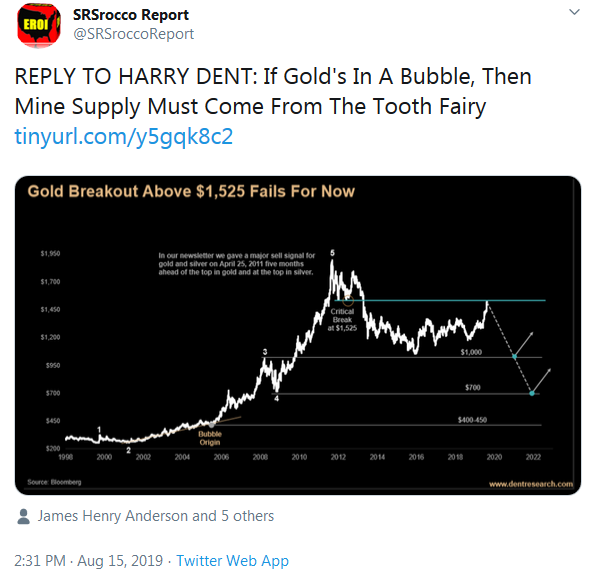 Aside from the POTUS tweets about the trade war with China and a multitude of geopolitical issues to consider, what is influencing and realistic about the price of gold are the following:

Subtract the official rates of inflation (in the U.S.) and we live in a NIRP ZIRP world across the board. 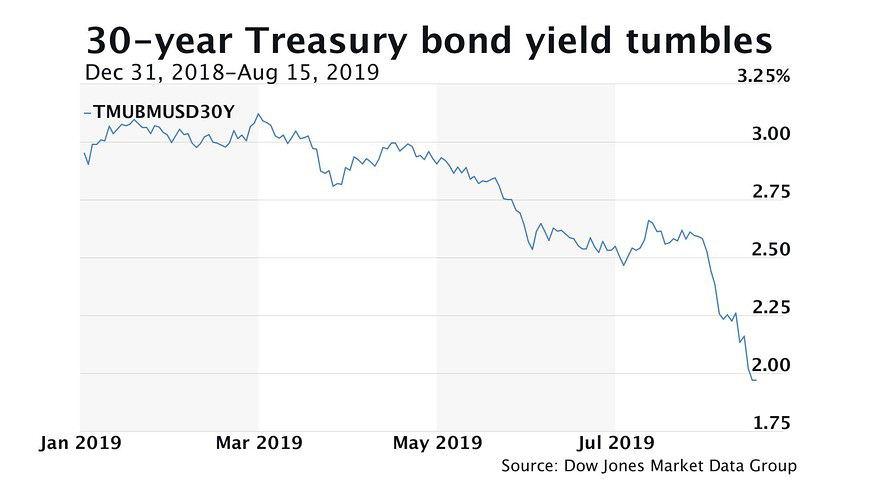 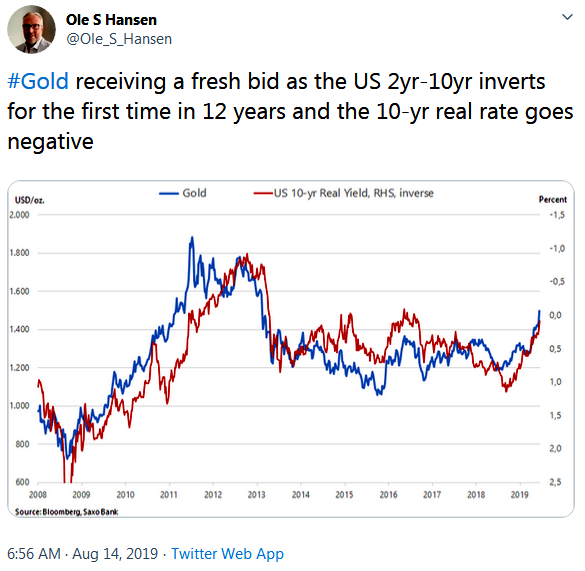 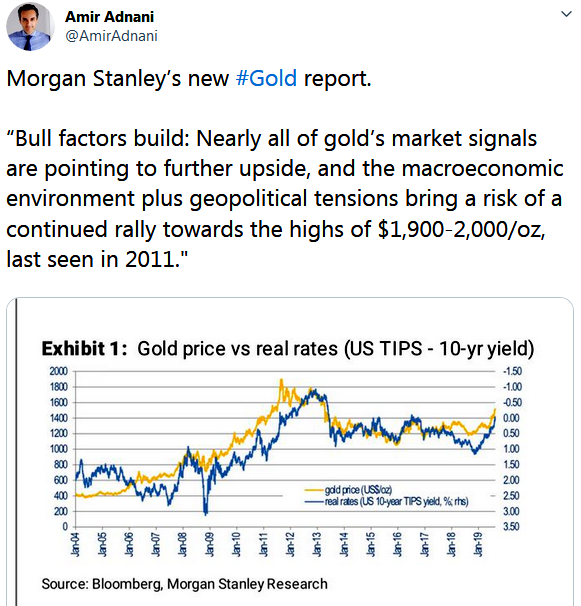 If you missed my analyses on gold’s price advance since the Aug. 2018 low, I suggest you review “Gold’s Alligator Tongue and Asian Short Squeeze Obliterated $1,380 Resistance,” published on Jun. 20, “Post-G20 Truces Coddle a Plunger Candle in Gold,” published on Jun. 30, and “The Banking Scam and Gold’s Poker Face at $1,433,” published on Aug. 4. To view a larger version of any chart, right-click on it and choose your “view image” option. 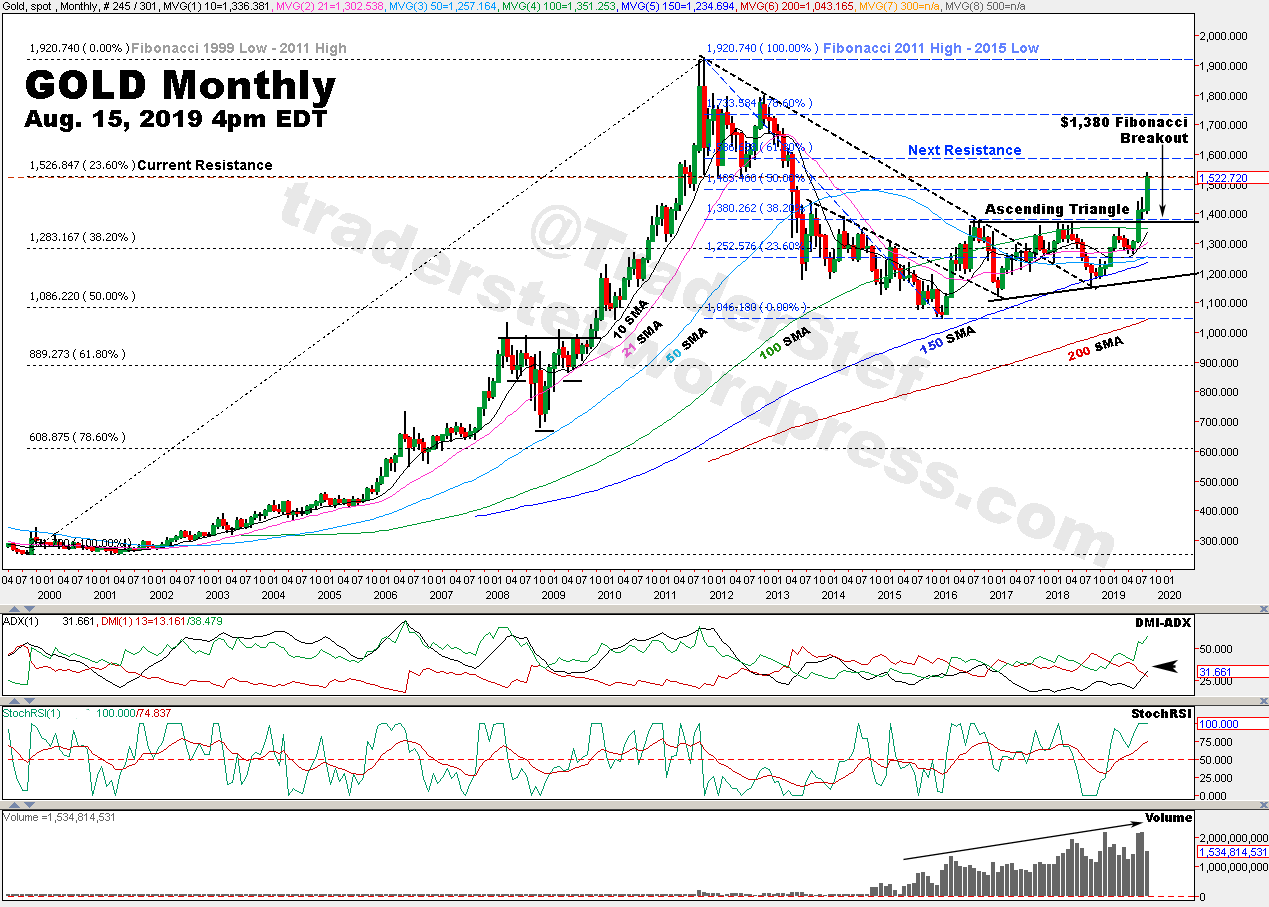 The monthly highlights the continuation of gold’s upside move with a $135.53 gain in August with two weeks left. The $1,430 lateral resistance area from Aug. 2013 is likely history, and the $1,483 Fibonacci was taken out with conviction and the price easily advanced to a high of $1,535.05 on Aug. 13. Resistance is currently at the $1,526.85 Fibonacci level, where lows printed during 2011 and 2012 just prior to the 2013 plunge. The next target within striking distance is the $1,586.65 Fibonacci. All of the Simple Moving Averages (SMA) continue to realign into a bullish pattern, the DMI-ADX is setting up an Alligator Tongue momentum play, and we have a rising price and volume pattern. The only downside is the StochRSI, which is in overbought territory but can remain elevated for an extended period. The price is due for a breather and consolidation before decisively taking out $1,586. 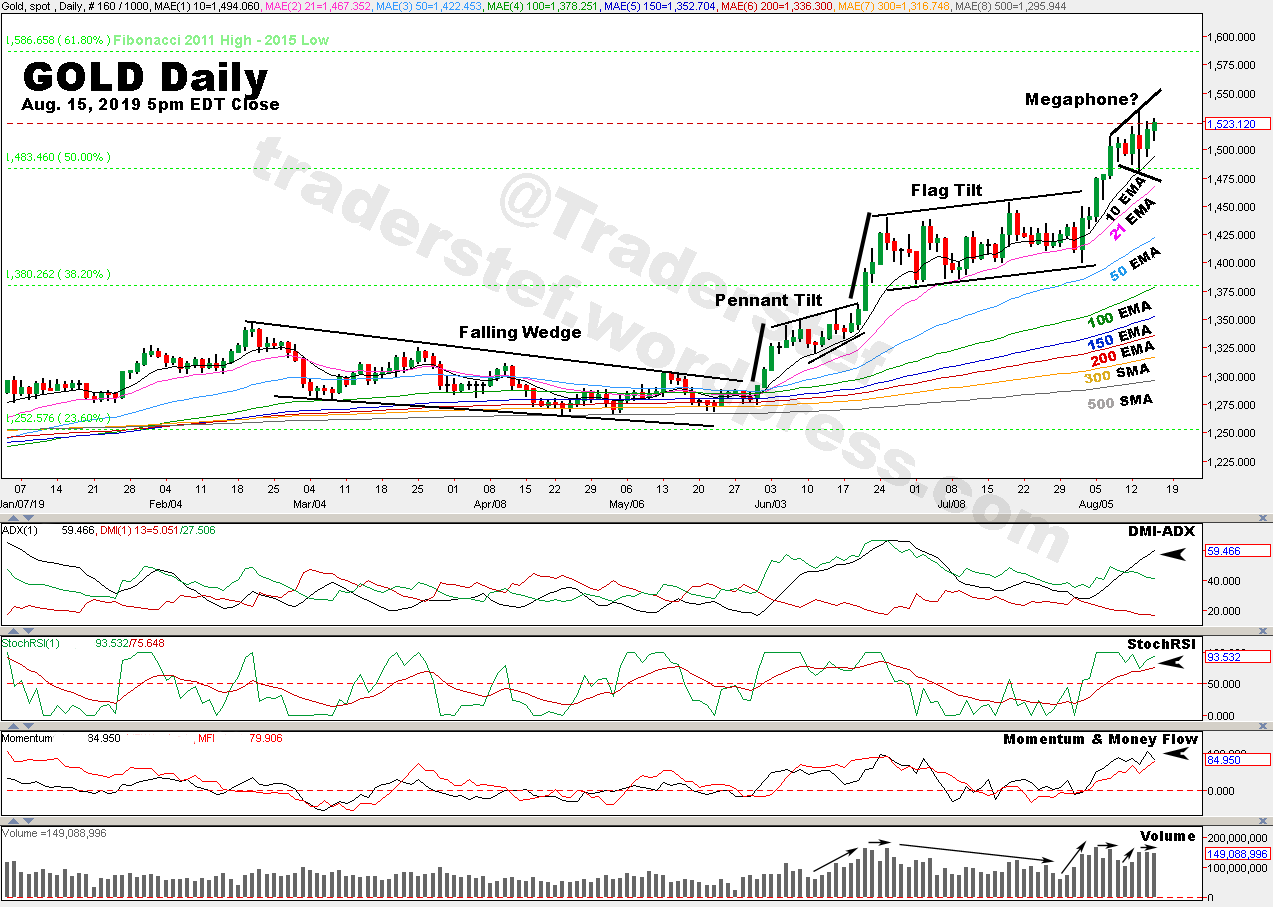 A bullish Pennant Tilt confirmed following a breakout from the Cup ‘n Handle pattern with rising Volume. The $1,380 Fibonacci resistance level was obliterated within one week. A bullish Pennant pattern morphed into the current Flag Tilt during mid-July… The Flag Tilt is riding atop the 21 EMA, as all the EMAs remain lined up with the stars… The StochRSI and Momentum may be showing signs of life after chopping south throughout the Flag Tilt, and the Volume has been steadily increasing since Thursday when additional tariffs on China were put on the table. I remain bullish in the near-term, and the next level of resistance at the $1,483 Fibonacci is within striking distance.

After breaking out of the Flag Tilt at $1,483, the price appeared to be chopping into another Flag pattern on shorter time frame charts until a short squeeze on Aug. 13 morphed it into a potential Megaphone (aka Broadening Top) due to the breadth of the candlestick. The Aug. 13 swing in price served as a test of $1,483 as support, rather than resistance, and was successful. The price action continues to ride along the 10 EMA and all of the moving averages remain aligned in a bullish pattern. The ADX is approaching an overbought level and the StochRSI has been there throughout August. The Momentum may be starting to roll over, but Money Flow continues upward with volumes remaining high and steady. As noted with the monthly chart, another breather and consolidation appears to be due before the $1,586 Fibonacci can be taken out with conviction. 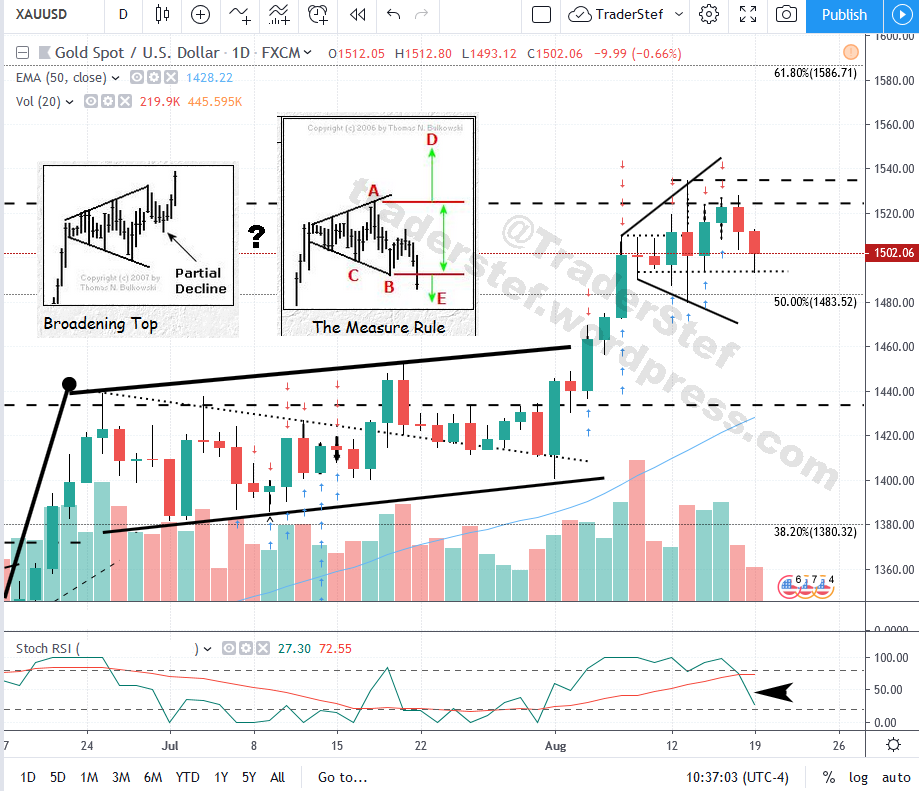 Despite the recent rally in silver, nobody cares until it breaches the $21.49 Fibonacci level with conviction. Here is a link garden of articles since my last analyses: