No Summer Rally or Bears in Gold and Silver – Technical Analysis 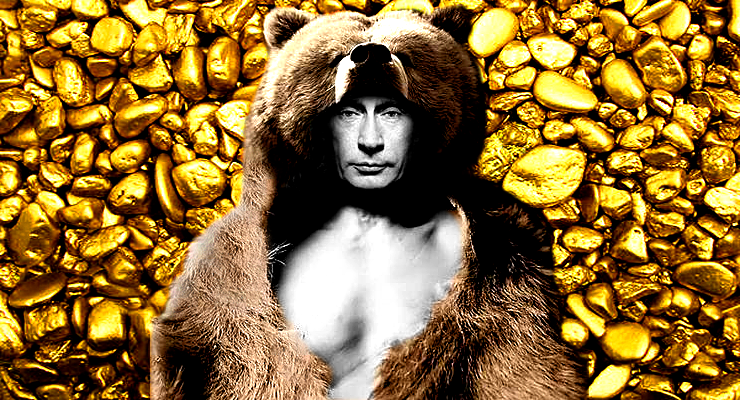 It was definitely steamy with extreme drought in regions across the United States, but gold and silver did not hit seasonality liftoff this summer. There were numerous opportunities to trade upside sweet spots and short downside swoons on the whim of economic reports and twisted narratives from presstitutes that triggered algorithms into illogical moves. Despite repeated concerns from the mainstream financial press and alt-media, tall tales were spun regularly vs. Jackson Hole and the Fed’s continuous dovish monetary policy, aka the Taper Caper. 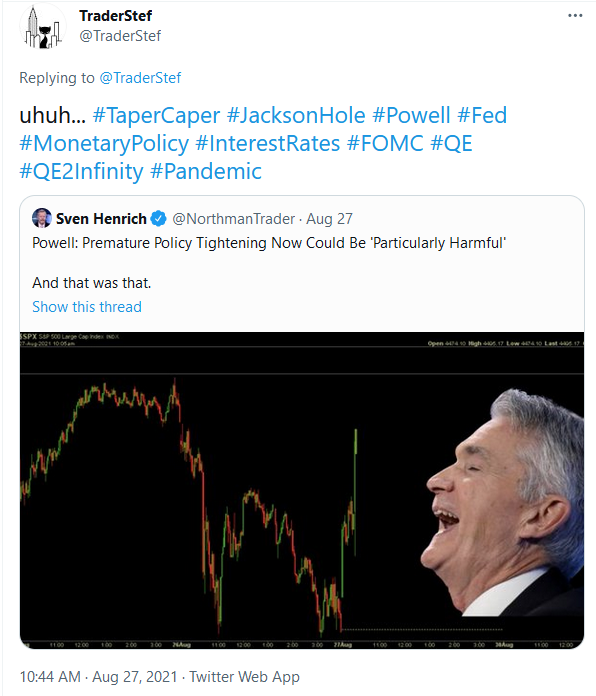 The short-lived rallies with choppiness on the charts actually matched seasonality history on shorter time periods, but did not translate into an overall uptrend that is typical during the summer. Precious metal gamblers might be disappointed since they blame boogeymen for price volatility, but seasoned traders and investors were not sweating the extended consolidation since August of last year. The price action has held firm as the world is gripped in uncharted territory with economic data that defies logic at times, and the domestic and geopolitical atmosphere is unstable like a roller coaster ride at 30,000 feet. Here is an excerpt from my July analyses (Twitter thread):

“Summer is definitely hot in a few regions of the United States this year and the potential for a heated bull-run in gold and silver is just around the corner. The pandemic era’s damage is creeping through the global landscape with asymmetric impacts that include but are not limited to pockets of steamy inflation, supply chain disruptions, jobs and unemployment, civil unrest, geopolitics, extreme sovereign debt, illegal state-induced coercion with profound censorship over exercising your right of informed consent (Twitter thread) for making evidence-based decisions about a gene-modifying experimental inoculation, and a dystopian brew of radical-left wokeness and fascism that risk a societal implosion after ongoing forensic audits surrounding the 2020 election come to fruition… If seasonality repeats this summer, we’re on the doorstep off its beginning.” – TraderStef, July 15

Gold is down 13% since its $2,075 high last August and silver is down by 19% since its $30 high in February. There may be disgruntled bears in the volatile woods of consolidation, but a larger bull herd is lurking in sheeps’ clothing. Here are a few examples of investors, companies, countries, and central banks that regularly buy the dips in gold and hoard it in vaults for rainy days on the horizon. Presstitutes would have you drink the “pet rock” Kool-Aid that reemerged in the Wall Street Journal this month. 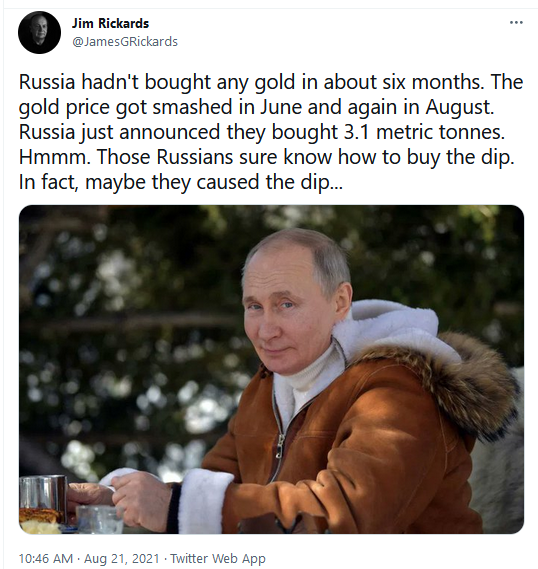 German physical gold purchases increase to a decade high… “Germany has always been the biggest physical gold buyer in Europe (traditionally). In the first half of the year gold demand has hit its highest level in a decade. Data from the World Gold Council (WGC) showed H1 demand for bar and coins in Germany increased by 35% from the previous six months, compared with 20% in the rest of the world… Raphael Scherer, a managing director at metals dealer Philoro Edelmetalle GmbH said ‘We have a long history of inflation fear in our DNA. Now the inflation risk is picking up.’ Its gold sales are up 25% on what was already a strong 2020. ‘The outlook for precious metals is very positive’… Alexander Zumpfe, senior trader at refiner Heraeus Metals Germany GmbH & Co. KG stated gold has ‘always played a certain role among German investors… with the increased buying interest in recent years, however, it has become even more present.’” – Rajan Dhall

Bloomberg’s David Rubenstein interviewed John Paulson yesterday and the journo was unaware that gold is $100 higher than his squirmy numbers. Nothing irks me more than a compensated financial pundit with a bias that doesn’t do homework and failed to check a chart before showtime or putting a pen to paper.

Here’s why this billionaire investor predicts cryptocurrencies will ‘go to zero’… “On to our call of the day… investors shouldn’t waste money or time on one increasingly popular asset class that he views as a bubble. ‘Cryptocurrencies, regardless of where they’re trading today, will eventually prove to be worthless. Once the exuberance wears off, or liquidity dries up, they will go to zero.’ President and portfolio manager of U.S. investment firm Paulson & Co., Paulson said it wasn’t even worth shorting bitcoin given its extreme volatility, and instead suggested investors sock money into bullion, due to ‘a very limited amount of investible gold.’ Paulson sees investors pulling money out of fixed income and cash as inflation rises, then heading toward the only logical destination — that is, gold.” – MarketWatch

Mark Mobius Says Hold 10% in Gold as Currencies Will Be Devalued… “At this stage, ‘10% should be put into physical gold,’ said Mobius, who set up Mobius Capital Partners after more than three decades at Franklin Templeton Investments. ‘Currency devaluation globally is going to be quite significant next year given the incredible amount of money supply that has been printed.’” – Bloomberg

Palantir Buys Gold Bars as Hedge Against ‘Black Swan Event’… The company spent $50.7 million this month on gold, part of an unusual investment strategy… The gold purchase was buried in a securities filing last week… Palantir’s 100-ounce gold bars will be kept in a secure location in the northeastern U.S., according to the filing. ‘The company is able to take physical possession of the gold bars stored at the facility at any time with reasonable notice.’” – Yahoo Finance, Aug. 18

The Reserve Bank of India (RBI) gold reserves rise by 27% in 2 years; buys record gold this year… “RBI increased its gold purchases, as part of its foreign exchange (forex) reserves. In the first half (H1) of calendar year 2021 (CY21), the addition of gold to India’s forex reserves has been the highest — on a half-yearly basis —at 29 tonnes. Now, the RBI’s gold holding — as a proportion of its forex reserves — has for the first time crossed 700 tonnes… RBI was the second-largest buyer of gold among central banks after Turkey in FY21, according to a World Gold Council Report. RBI bought 42 tonnes (1.36 million troy ounces) of gold in the last fiscal year.” – IndoAsianCommodities, Aug. 13

Which mainstream financial publication dared to publish a bullish article on silver a few weeks ago?

Silver Prices Are Set to Rally Again. Here’s When You Should Buy… “Silver prices look set to stage a double-digit percentage rally in the fall. However, experts say investors should wait for a likely dip in prices over the next few weeks before snapping up a stash of the metal… Prices of the white metal have been on a wild ride over the past year and a half… Since around early August last year, prices have moved sideways, bouncing between lows of about $22 and highs near $30… And while gold prices reached a record level last year, silver didn’t… Still, on balance, the potential rewards of investing in silver bullion outweigh the risks.” – Barron’s, Aug. 6 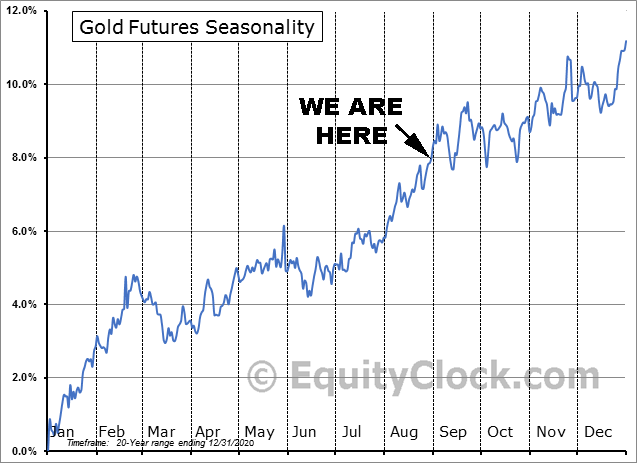 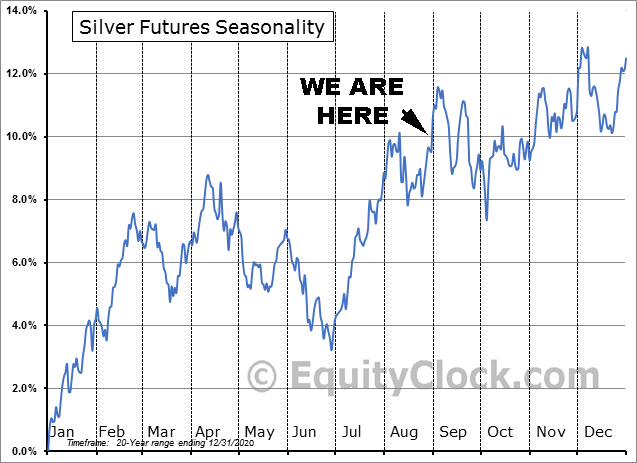 Gold and silver have rallied at the end of August due to several factors but aren’t limited to what I covered in the following articles:

Let’s go to the charts. To view a larger version of either chart below, right-click on it and choose your “view image” option. 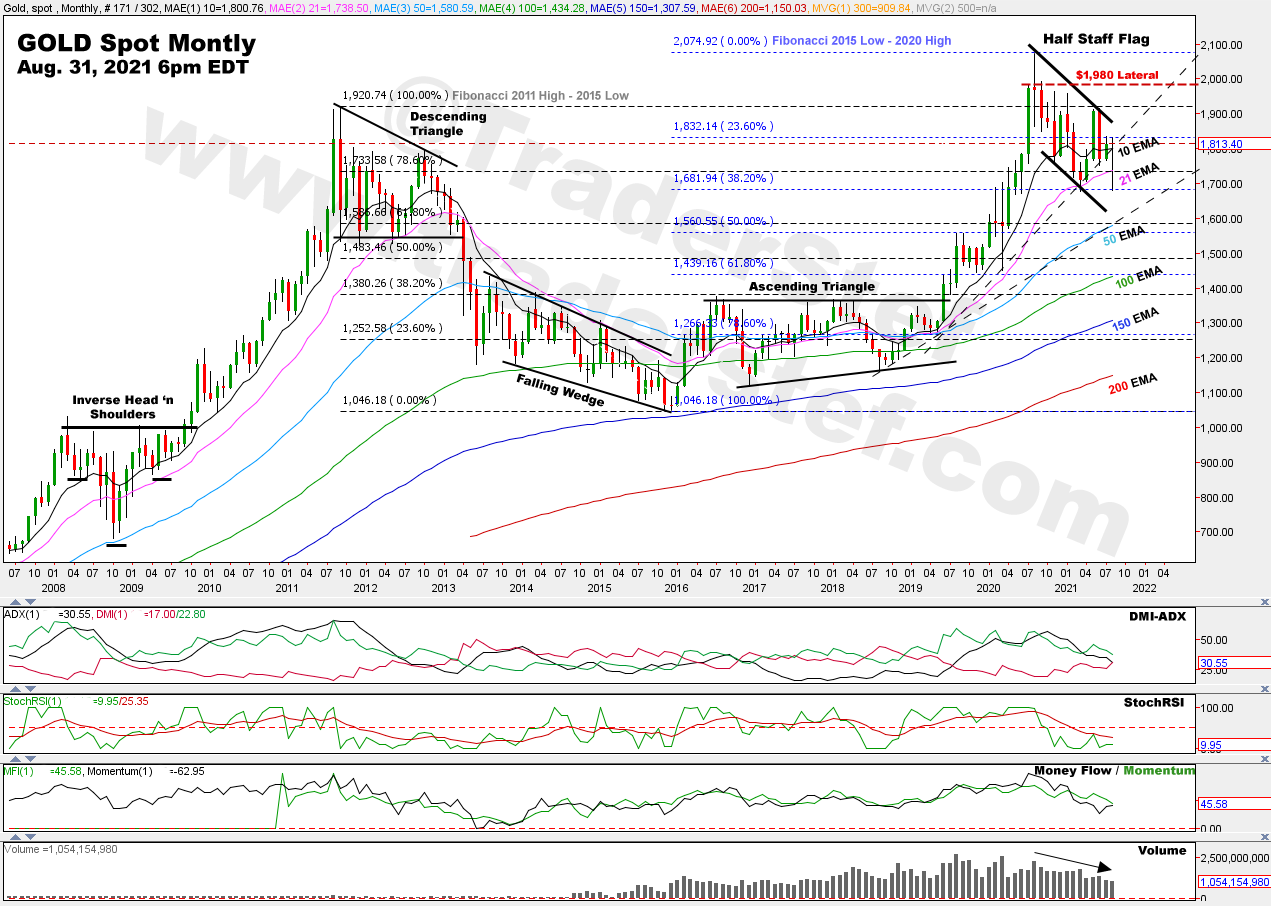 The end of the month is ideal to analyze the monthly chart instead of slicing and dicing shorter time periods. The chop and consolidation pattern since last August is a bullish Half Staff Flag. This month’s candlestick closed with a bullish DragonFly Doji that has a huge $134 tail. That is indicative of a lot of buying taking place despite the lowering of Volume. In rounded numbers, the August high was $1,832 with an open and close at $1,814, and the $1,680 low pivoted off the 38.2% Fibonacci that prints a potential Eve & Adam Double Bottom drawn back to Feb./Apr. of 2021. The price action has closed above the 10 Exponential Moving Average (EMA) over the last four months. The price has also closed above a lower trendline drawn up from the Mar. 2019 low since tapping it in Mar. 2021.

The DMI-ADX is not set up with an Alligator Tongue power trend indicator, the StochRSI is in oversold territory and long in the tooth, the Money Flow and Momentum remain indecisive, and Volume has fallen throughout the Half Staff Flag that says a bottom is likely and is nearer than further away. The chart is bullish and remains ripe for scalping sweet spots. I’ve warned since last September to not risk large paper capital positions until $1,980 is taken out decisively on large buying Volume. 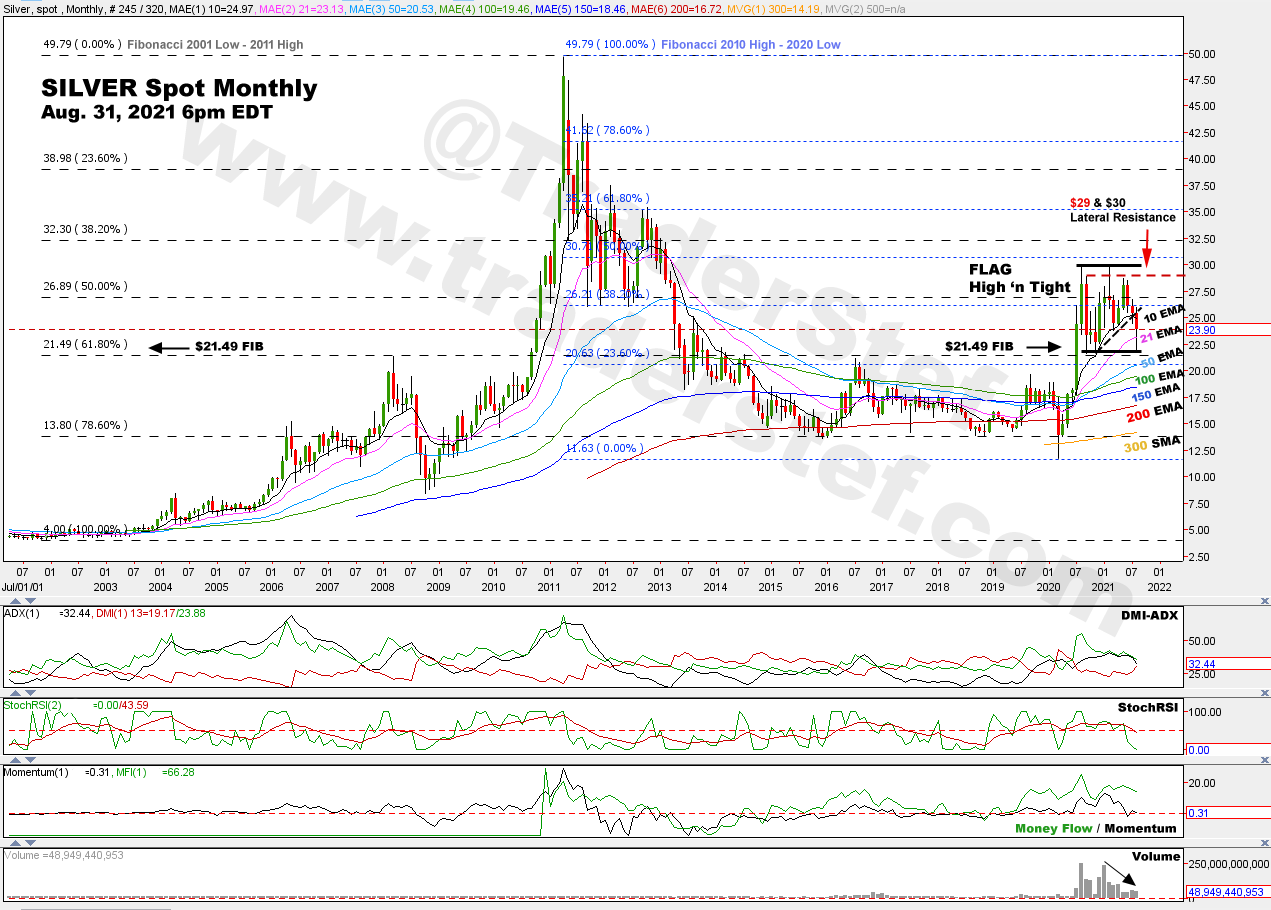 The chop and consolidation pattern in silver has morphed from an Ascending Triangle into a High ‘n Tight Flag in August. The high in August was $26, it opened at $25.50, it closed at $24, and the $22 low pivoted off the 61.8% Fibonacci that prints a potential Eve & Adam Double Bottom drawn back to Sep./Oct. of 2020. Unlike gold, the price closed below the 10 EMA this month after closing above it since last August. Despite that breach, all of the moving averages remain in a bullish setup. Take note that the Flag’s lower trendline is sitting on top of the $21.49 lateral breakout from 2020 with seven years of chop and consolidation beneath it.

The DMI-ADX is not set up with an Alligator Tongue power trend indicator, the oversold StochRSI is reminiscent of what happened in Mar. 2020, the Money Flow and Momentum remain indecisive, and Volume has fallen throughout the Flag saying a potential bottom is nearer than further away. The chart is bullish and remains ripe for scalping sweet spots. I’ve warned since last September to not risk large paper capital positions until $29 and $30 are taken out decisively on large buying volume.

Lastly, here is my Aug. 8 live radio interview that was not posted on social media. Topics include gold and silver technical analyses and a few other prescient subjects.

No Summer Rally or Bears in Gold & Silver – Technical Analysis 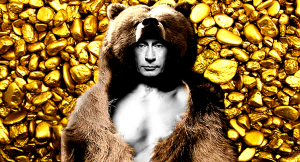 No Summer Rally or Bears in Gold & Silver – Technical Analysis