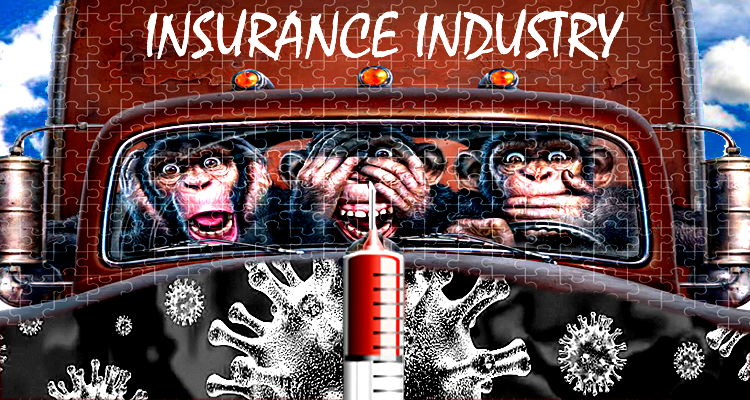 Actuarial data has begun to flow out of additional insurance corporations that confirm the whispers from OneAmerica’s CEO in late Dec. 2021. Hedge funds, large institutions, investment banking alumni, and traders are chatting up a storm behind closed doors about short selling the companies tied to alphabet agencies that oversee U.S. healthcare industries. The financial web of regulatory capture with pharmaceutical giants has been painfully exposed by warp-speed disabilities, disease, and death statistics.

“Insurance is one of the least political institutions around. People either die or they don’t. The policies either pay or they don’t. Not much room for spin. The numbers speak for themselves.” – Jim Rickards, Feb. 4

Here is an excerpt from Part 1:

“The key takeaway from OneAmerica’s revelation is that a record-breaking increase and pace of death and disability claims did not commence until 3Q21 through 4Q21, consisting of working-age and employed individuals between the ages of 18 and 64 ‘who are employees of companies that have group life insurance plans through OneAmerica.’ That demographic and client base has been subjected to employer mRNA gene-modification inoculation mandates under emergency-use authorization (EUA) since early 2021. There are no indications that the exponential rise in death and disabilities will lessen in 2022.” – Jan. 4

Let’s set the tone today with a few words by Croatia’s MP Mislav Kolakušić, a Croatian lawyer and politician who has been a member of the European Union (E.U.) Parliament since July 2019. He candidly addressed President Emmanuel Macron of France last month and reminded him that his government policies surrounding “mandatory vaccines represent a death penalty.”

The French populace is not exactly thrilled about the new law passed last month and they gathered outside of Pfizer’s HQ to express their opinion. Maybe French Revolution guillotines will be dusted off soon and brought to the town square for a demonstration of what happens to those who disregard informed consent and violate the Nuremberg Code.

Canadians have sparked a nationwide insurrection over mandates with a truckers “Freedom Convoy” that’s blocking U.S.-Canada border crossings and jamming the streets of Ottawa and other major metropolitan cities. Their message and convoy is spreading across the western world.

The main purpose for today’s missive should be a mindblower for any remaining red-pill-hesitant plebes since former Blackrock portfolio manager and hedge fund maverick Edward Dowd spoke extensively on PaineTV and briefly with Steve Bannon (timestamp 18:55 to 35:00) last week. He pointed out a slew of data signals that were mentioned at some point in the pandemic anthology and tied them all together to set the stage for the next financial crisis. His motives appear to be philanthropic, with a focus on family, young adults, and the future of our children who are being subjected to enormous debt, coercion, and tyrannical mandates. Here is the video clip with Bannon:

The Next Big Short – Pfizer & Moderna: the New Enron; Are Criminal Charges Defensible? 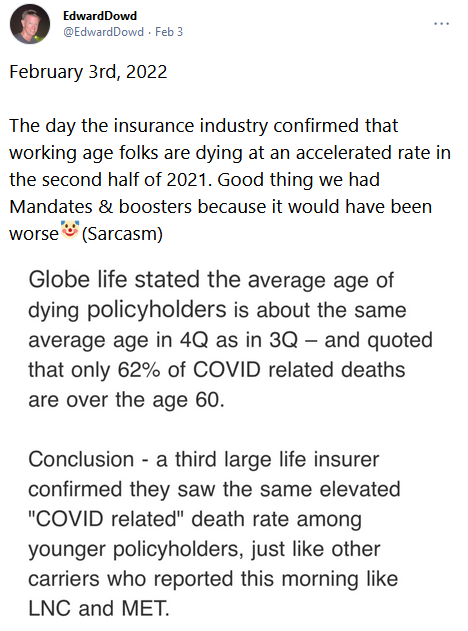 Prior to Dowd’s exposure to the general public via interviews and the Globe Life excerpt posted on his GETTR (Twitter) feed, numerous insurance giants began releasing similar versions to what OneAmerica witnessed in their 3Q-4Q21 data.

Life insurers adapt pandemic risk models after claims jump… “The global life insurance industry was hit with reported claims due to COVID-19 of $5.5 billion in the first nine months of 2021 versus $3.5 billion for the whole of 2020, according to insurance broker Howden in a report on Jan 4, while the industry had expected lower payouts due to the rollout of vaccines… Dutch insurer Aegon, which does two-thirds of its business in the United States, said its claims in the Americas in 3Q21 were $111 million, up (+268%) from $31 million a year earlier. U.S. insurers MetLife and Prudential Financial also said life insurance claims rose. South Africa’s Old Mutual used up more of its pandemic provisions to pay claims and reinsurer Munich Re raised its 2021 estimate of COVID-19 life and health claims to $600 million euros from $400 million. The long-term nature of life insurance products – often 20 years or more – means premiums are not yet capturing the risk that deaths or long-term illness will likely remain higher than previously estimated. Competition in the industry is also keeping a lid on premiums. Actuaries say rising claims will be eating into the capital which insurers set aside to ensure solvency.” – Reuters, Jan. 13

I can appreciate having a hard-copy preference when it comes to evidence that’s available in the public domain. It’s more compelling to sit down with a funeral director or pathologist and have a cold chat about what’s really happening in the basement of his office.

There are numerous avenues of inquiry taking place regarding the pandemic, the experimental jabs, patent history of the virus and gain-of-function research, hospitalization data, and mandated government policy. Alphabet agencies in the U.S. are receiving requests from the public, esteemed physicians, and researchers, and Senator Johnson is demanding answers from the Department of Defense (see second opinion roundtable on Capitol Hill at 4:50:43 – 4:57:35  timestamp) on a few pressing questions (see DARPA’s involvement and a whiteboard explanation on the weaponization of SARS). 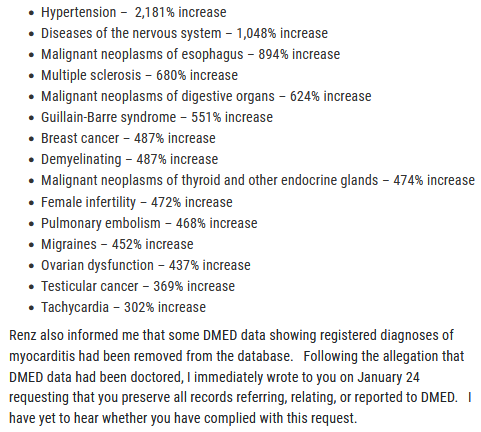 Screenshot from Senator Johnson’s Letter to Department of Defense

One of the most interesting developments that circulated in the mainstream is Pfizer’s court battle to keep its mRNA vaccine safety data secret for 75 years. Fortunately, a judge laughed at Pfizer and the FDA’s timeline and ruled on eight months to release the data. Another odd phenomenon is that the world’s most mRNA-vaccinated countries are experiencing shockingly high infection rates, hospitalizations, and deaths that are not due to COVID. I find Israel’s new case data to be incredible since they’re the poster child for the most vaccinated country on the planet.

Lastly, a wrench has appeared in the works for those who count on a life insurance payout due to an mRNA vaccination injury or death. The EUA status of the jabs voids all contracts, and a court in Europe has ruled that vaccine-related deaths are considered suicide with no payout. In France, a rich entrepreneur is said to have died as a result of the mRNA jab and had multimillion-dollar life insurance policies for the benefit of his children and grandchildren. In a world where informed consent has been denied, it’s stunning that a court has ruled such deaths as the victims’ choices and suicides. No jab, no job equates to voluntary suicide. I’m not surprised given what we’re learning about this pandemic nightmare on a daily basis.

Here are a few choice articles to consider and a refresher on SARS-CoV2 patent history before closing up shop tonight.

Follow the Patents, Then You Will Understand Covid – Dr. David Martin