As described at the opening of Part 1, 2, and 3, which followed a tremendous $200 rally in gold, with three sweet spot trading opportunities identified, price derangement syndrome (PDS) returned to infect the discourse on gold’s price performance after a pullback in late February prompted a crescendo of whining that culminated at the psychological breach of $1,300. Fortunately, the whining has abated to some degree, but less than accurate speculation about manipulation occurs at every price wiggle, with gremlins forever hiding behind every candlestick on a gold or silver chart.

Over the last couple of months, I stumbled into commenting about fake news in gold commentaries, which has raised some eyebrows lately. My intention is to never belittle any analyst that may fall prey to the topic, but rather provide balanced insights for the novice who is searching for fundamental and technical analysis without misinformation, hype, clickbait, or instilling fear of investing in precious metals. Before giving an update on the gold chart, here are a few items that fell into the fake news roller coaster this month.

The following suggestion would do more for the value of gold and silver and bring the paper playpens into alignment by forcing fair value in precious metal commerce vs. the folly of fiat currency.

“The ‘banking cartel’ is not stealing your money, the precious metals community is, and ignorant citizens. Instead of chasing a ‘cartel manipulation’ ghost, focus on legislation at the Federal level, as States are doing, and return gold and silver to nontaxable constitutional sound money.” – TraderStef, Apr. 10

There are two topics in particular that I believe are not a coincidence. Central bank gold buying hit its highest level in a half-century at the same time that new Basel III guidelines became effective this month via the Bank of International Settlements (BIS), and those guidelines were formulated at the tail end of the great financial crisis.

The bottom line is that gold is now considered a Tier 1 asset instead of Tier 3 on banks’ balance sheets. As a Tier 3 asset, gold was only valued at 50% of its market price. The Tier 1 qualification makes gold a loan-backing reserve at 100% of its market price, which is the same as cash and sovereign bonds. For the first time in a half-century, gold returned to its status as money in the financial system. The speculation is that central banks will start buying gold and its price will rise exponentially. The truth is that the BIS gave the banks nearly a decade to comply with Basel III, which just happens to be the same time slot that central banks backed up the truck and began hoarding those pet rocks. As the price of gold chopped sideways since 2013 and printed a low of $1,046 in Dec. 2015, the central banks were buying hand over fist on the cheap. That does not mean they will not buy more or the price will remain stagnant, but they already took a large chunk off the market at bargain basement prices that were hovering around the mining cost of production, all the while some folks were busy whining about the price action and hunting cartel ghost activity that is legal Teflon. 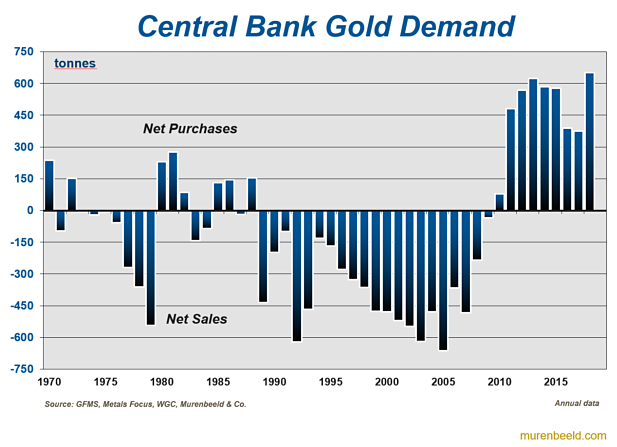 If we look at one country as an example, here is the Russian central bank data: 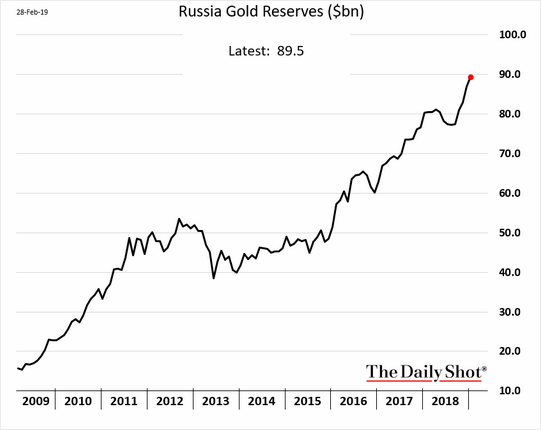 Another news item that garnered speculation in recent weeks is that China began reporting small increases in its gold reserves to the IMF over the last four months and is described by the mainstream financial press as a “gold buying spree.” Due to China’s lack of transparency, their gold hoard is likely the most under-reported precious metal news on the planet. They are also the world’s largest gold miner, with reports of at least 400 tons per year. Keep in mind that they export none of it, with the exception of a gold Panda coin here and there that may be as fake as other coins that appear on the market from Chinese counterfeiting operations.

Koos Jansen over at Bullion Star put a majority of speculation to rest when he reported on China’s estimated gold reserves with sources out of Asia. Do you believe mainstream reports of roughly 1,900 tons or thorough independent sourcing? The following chart is from his Apr. 2018 article that includes data until the end of 2017. 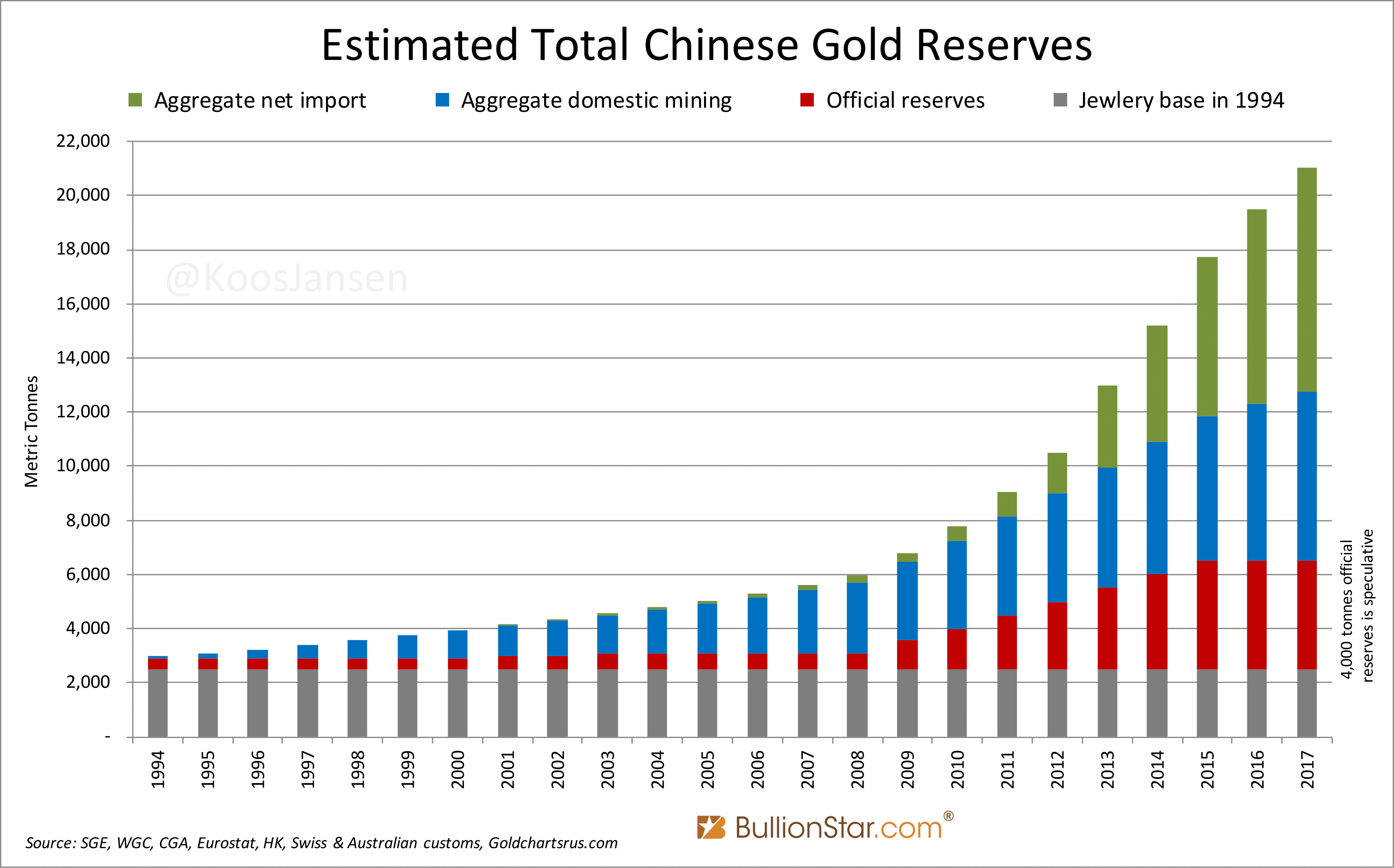 Lastly, I came across the following daily chart on gold that suffers from a lack of basic candlestick reading skills. 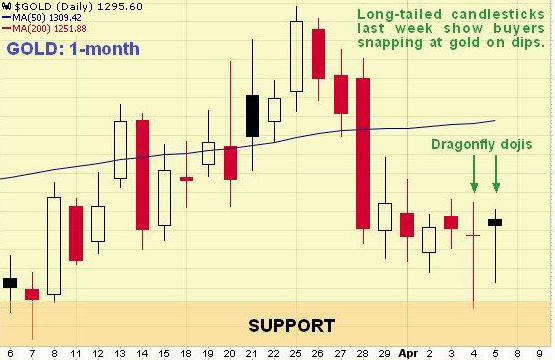 Every candlestick tells a different story and carries significant weight when formulating an analysis. Like lapels vs. pleats, there are highly significant differences. A DragonFly Doji is a rare occurrence on long-time frame candles, and this is how they appear:

Let us start today’s technical analysis with a reminder that we remain in the middle of spring seasonality patterns that typically create a choppy atmosphere with downside volatility. April tends to experience a bump up in the price action. To view a larger version of any chart, right-click on it and choose your “view image” option.

On Apr. 4, I noticed substantial buy volume on the 1-minute chart with an Inverse Head & Shoulders pattern. I posted the following on my Twitter feed… 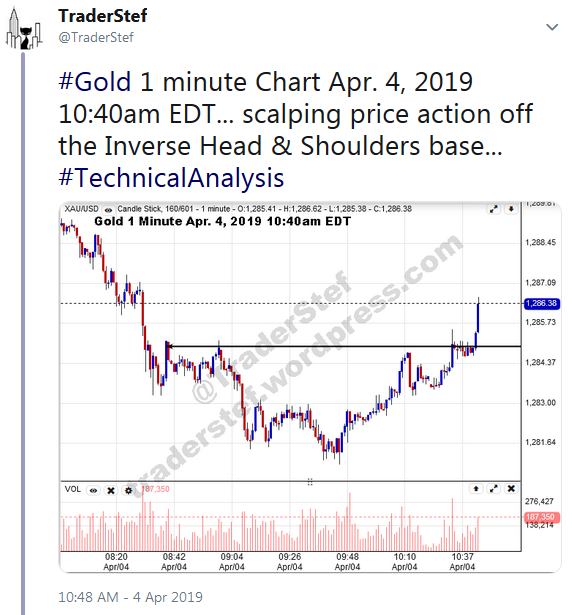 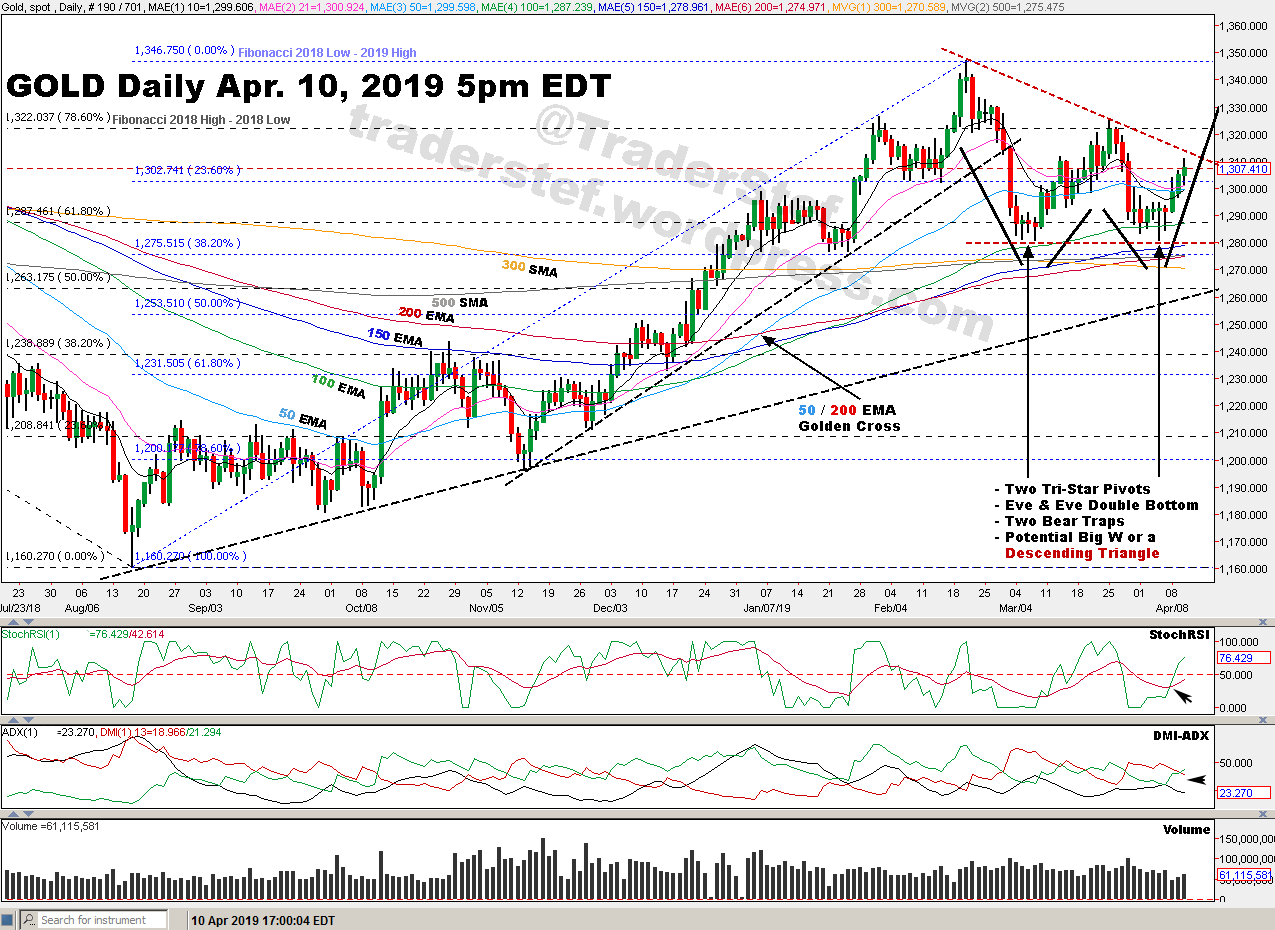 Excerpt from the gold daily chart analysis on Mar. 12…

“The pullback in price came very close to tapping the 100 Exponential Moving Average (EMA), but it found support at around $1,280 with several opens and closes at $1,287 on the 61.8% Fibonacci level drawn from the 2018 high and low. There were two candlestick patterns where the price found support that indicated a reversal in price was possibly in the cards. The first was a Southern Doji, and the second extended out along the Fibonacci line as a Bullish Tri Star. On the following day, a pathetic February jobs report hit the headlines showing only 20k created, which spiked the price of gold back above the 50 EMA… The 50/200 EMA Golden Cross that occurred in early Jan. 2019 remains intact while all the moving averages continue to line up for an upward trend in price. I remain bullish long-term and will switch to bullish near-term if volume confirms an uptrend has resumed, otherwise I will stay neutral until the price action exhibits conviction. The price has a good deal of lateral resistance levels to deal with beyond $1,350 that originate from the price chop during the highs in early 2018.”

Excerpt from the gold monthly chart analysis on Mar. 29…

“Springtime is typically a bad time of the year to layer bullish positions due to seasonality patterns, but short-term scalps and speculative swing trades are possible if $1,300 is taken out decisively again. The price action could be choppy for a while before challenging the $1,380 level, but that could shift on a dime if a news headline or market event prompts a decisive price move.”

Today’s release of the March FOMC minutes did not produce any significant price volatility, despite fear mongering from Twitter bleacher seats that gold would be whacked by the cartel.

Since the high in February, two Tri-Star bullish reversal patterns have formed an Eve & Eve Double Bottom. Both bottoms look like Bear Traps under the 50 EMA. There are two chart patterns developing. On the bearish side of the ledger is a Descending Triangle, and on the bullish side is a potential Big W. In order for the Triangle to fail and Big W to win, the price must take out the topside trendline (red line) decisively, not fail at the $1,322 Fibonacci level, and go on to challenge the February high with conviction. All of the moving averages continue to line up in support of upside price action, the 50/200 EMA Golden Cross remains intact, and the 100 EMA provided solid support at both Tri-Star pivots. The DMI-ADX remains neutral but the StochRSI pivoted into a near-term bullish stance. The volumes have risen along with the price over the last three days. If the topside trendline is taken out with conviction, there may be an opportunity to scalp a retest of the February high and observe the price action along the way.

Here are a few news items to consider before closing up shop tonight: