Cannabis found its economic roots in North America by way of colonists from Europe. Sir Walter Raleigh came up with the bright idea of harvesting weed in 1585 after his friend Thomas Heriot had seen cannabis-like plants growing wild where the state of Virginia eventually came to be. That variety of hemp turned out to be Acnida Cannabinum (aka Cannabis Sativa, with less than 1% THC), a plant that also yields a fiber suitable for weaving and other tradable products but inferior in strength to the cannabis grown in Europe.

Hemp’s lack of THC is partly due to growing the female and male plants together, which stunts the pollination process that produces a high THC content. When growing cannabis for the purpose of being a drug, the female plants are grown alone and kept celibate. The flower buds of the plant must remain unpollinated to ensure high-quality THC content. The end users consume the unpollinated buds by smoking, vaporizing, extracting the oil/resin, cooking in butter for use in food, and many other options. Other parts of the plant also take advantage of the psychotropic and medicinal THC content.

Settlers who founded the colony of Jamestown, Virginia in 1607 did not cross the Atlantic Ocean to become hemp farmers. Most Europeans and Englishmen came with a belief that the New World was rich in gold and silver deposits. They expected to make quick and easy fortunes and then return home as soon as possible. When they did not find the precious metals or much else they saw as having value, discouragement set in, along with a growing aversion to religious and social dogmas that crossed the pond while struggling to survive in an unknown land. Had it not been for the friendliness of the Native Americans who gave them food and taught the Pilgrims how to raise basic crops, they all would have starved to death.

In 1611, by order of King James, every colonist had to supply 100 hemp crops to the Virginia Company for shipment back to England. The colonists cared as little about farming hemp as they did any other crop. Despite the indifference, in 1616, John Rolfe boasted that Jamestown had grown hemp “none better in England or Holland.” He also began to experiment with tobacco farming, and the demand for American tobacco turned out to be bigger than anyone expected. When faced with a choice between raising tobacco and becoming wealthy or submitting to the Crown’s orders for hemp, the colonists planted tobacco in every crevice of Jamestown.

To get the folks in line with King James, numerous attempts were made to incentivize the population to focus on hemp instead of tobacco, but they all failed. Hemp was grown and used for numerous products and was a great crop for self-sustenance, but it was not until the American Revolution that hemp became “more valuable than cash.” In order to win independence from England, the colonies not only had to create an army, but also become self-reliant in all the resources needed to support that army, as well as a civilian population. Grain and beef were the first priorities, and then efforts were devoted to raising raw materials for the war efforts. Taking the lead in demand was hemp. In the early 1780s, the price of hemp fiber sharply increased, from an average of 30 shillings per hundredweight to 300 shillings.

The majority of Virginia’s hemp was grown by small farmers and used in the manufacturing of rope and cordage. “Ropewalks” and sail-making factories multiplied all over the colony to supply the colonial navy with its needs. If any man worked at those jobs for at least six months, he was excused from military duty for the duration of the war.

Hemp was more valuable than cash because paper money had no value in the colonies. $1,000 in Virginia currency was only worth $1 in silver. Due to the lack of faith in paper currency, the economy as a whole operated on a barter system. Hemp’s “comparative uniformity, freedom from deterioration, the universal and steady demand for it, and its value, which exceeded all other raw produce, was recognized as the standard commodity for the first three or four decades” in the new American republic.

So what happened to hemp and cannabis after the American Revolution?

A Brief History of How Marijuana Became Illegal in the U.S… “The problem is, while early regulation provided financial purpose and medical protection for the average consumer, deep-seated cultural misconceptions have resulted in today’s archaic marijuana laws.

Starting in the 1800s, the young American nation began regulating the pharmaceutical industry and marijuana, starting with laws like the Food and Drugs Act of 1906 — the intended targets being those who mislabeled or polluted drugs with undisclosed narcotics. This resulted in labeling non-medical cannabis, which arguably sparked a fear integrated into drug-related language itself.

Xenophobia was next to grip the nation as a flood of Mexican immigrants fleeing the Mexican Revolution of 1910 introduced marijuana’s recreational use. Interestingly, it was only referred to as marijuana ‘because anti-cannabis factions wanted to underscore the drug’s ‘Mexican-ness,’ according to NPR. It was meant to play off of anti-immigrant sentiment. The ‘marijuana menace’ then became the battleground with a specifically delineated ‘us’ and ‘them’ — later to expand to ‘African-Americans, jazz musicians, prostitutes and underworld whites,’ Eric Schlosser wrote for the Atlantic in 1994.

It didn’t help the early perceptions of marijuana that the Great Depression was right around the corner in 1929. The assumptions that marijuana would incite violent behavior, lead to insanity, addiction and drug abuse and even spur someone to commit sex crimes were fueled by the 25% unemployment rate, increasing animosity toward anyone perceived to be the cause of a floundering economy. By 1931, government research determined that marijuana was linked to heinous criminal activity ‘primarily committed by ‘racially inferior’ or underclass communities,’ leading to 29 states outlawing the drug outright, and in 1932, the federal government urged states to adopt the Uniform State Narcotics Act.” – Mic, Jan. 2014 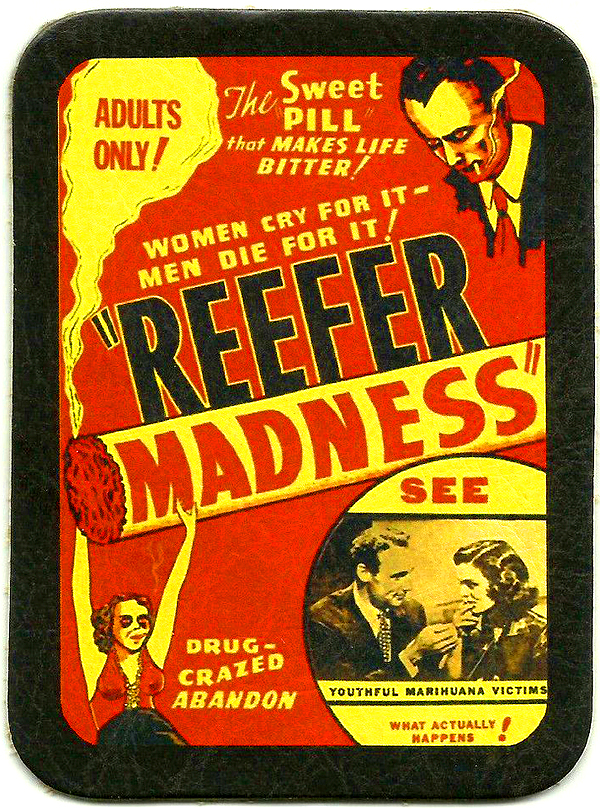 Cannabis has “come a long way, baby” since the dark days in 1927 when congress created a Bureau of Prohibition, then legislated the Uniform State Narcotic Act in 1932. While history is replete with “reefer madness,” cannabis and hemp have grown up and are the baseline ingredients for thousands of end products that include building materials, cosmetics, plastics, supplements, clothing, textiles, food, and medicine. North America is just beginning to re-realize the economic and therapeutic benefits of the cannabis family. There are only a handful of publicly-traded, early-stage companies with excellent opportunity for growth.

With that thought in mind…

With Constellation Deal, Canopy Has the Chance to Be Google of Pot… “After the Constellation deal, Canopy will have 12 times more cash than any of its Canadian competitors and almost as much cash on hand as the approximately C$7 billion that has been raised in the entire Canadian cannabis industry to date, according to Matt Bottomley, analyst at Canaccord Genuity Group Inc.” – Bloomberg VIDEO, Aug. 22

For your consideration, the Canopy (NYSE: $CGC) weekly chart, up another 4% as of today’s close. 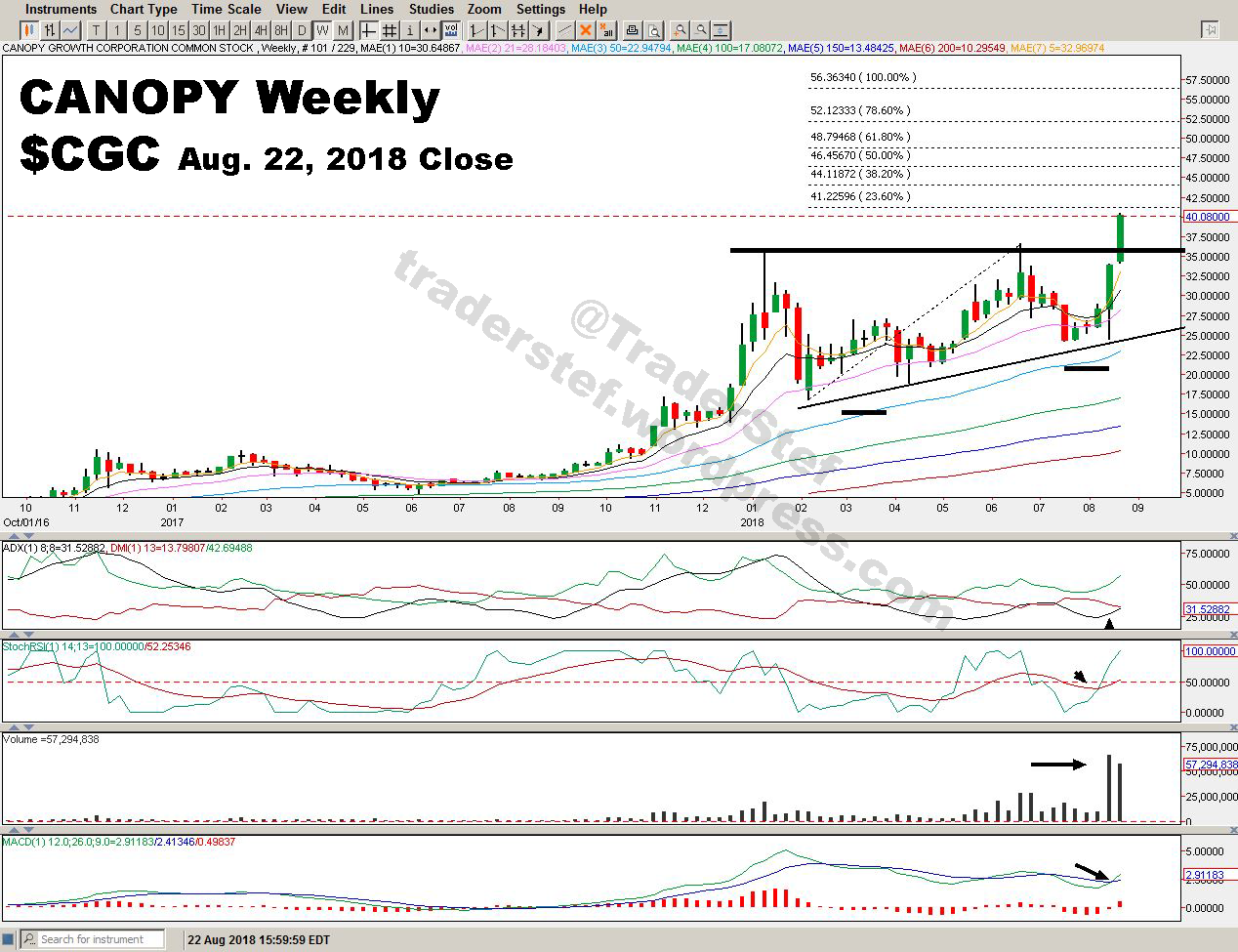 For the latest map and information of where the legality of cannabis stands in every state, visit the National Cannabis Industry Association (NCIA). 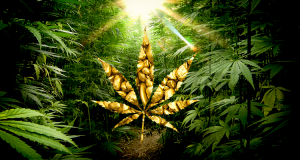