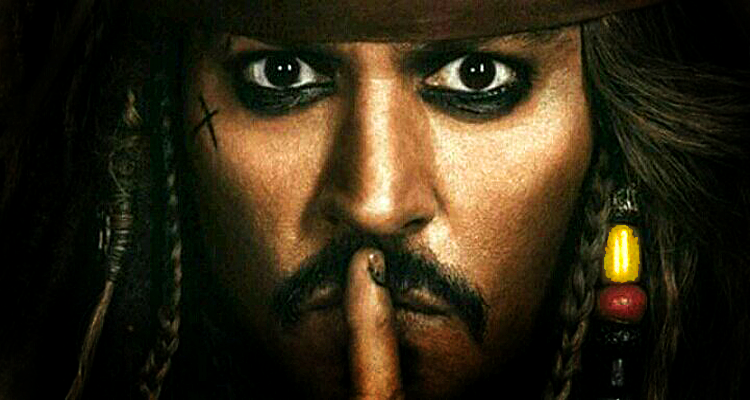 If you missed my recent analyses on the price advance of gold and silver, I suggest you review “Silver Still Needs a Few Dollars More for a Breakout,” published on Aug. 26, and “A Silver Note and the Screaming Gold Rally Pauses After the Dog Days of Summer,” published on Aug. 31. There is no major change in the CFTC’s Commitments of Traders (CoT) report data this week so it will not be covered today. 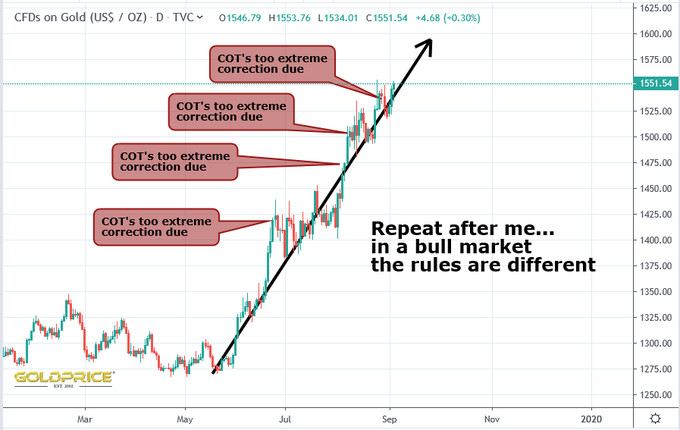 In addition to technical analysis, what has been the secret to anticipate the price action this year? Do you remember when Ben Bernanke said he did not understand the gold price? The seasonality pattern for gold has been spot on, and silver has had a lag of a week or so. 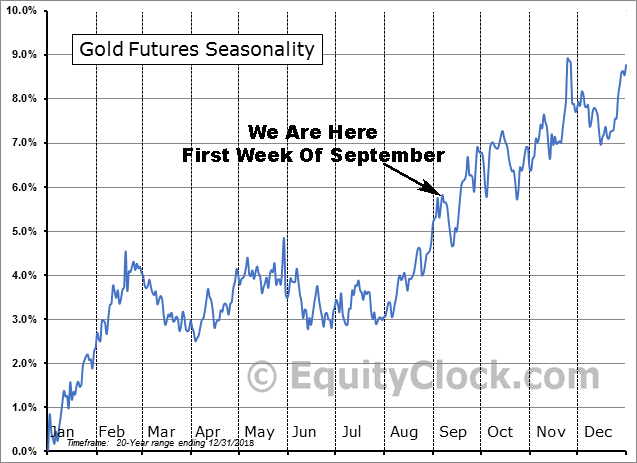 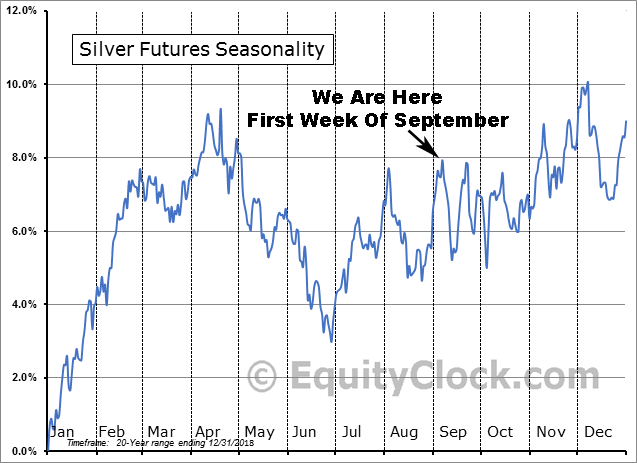 “Veteran traders know no market’s price goes straight up or down.. In fact, periodic significant corrections in price are a healthy element that suggests uptrend can continue. A price spike w/no correction suggests big upside will likely be short-lived.” – Jim Wyckoff, Sep 5

When an opportunity in any asset is approaching or revisiting a secular bull market, bottom picking and top picking are not what seasoned professionals do, as they’re more often than not looking for low-risk, high-reward momo play sweet spots and layering core positions for years. The price action that led to the following analysis is a culmination of a year of charting for all of the savvies who follow my work. To view a larger version of any chart, right-click on it and choose your “view image” option. 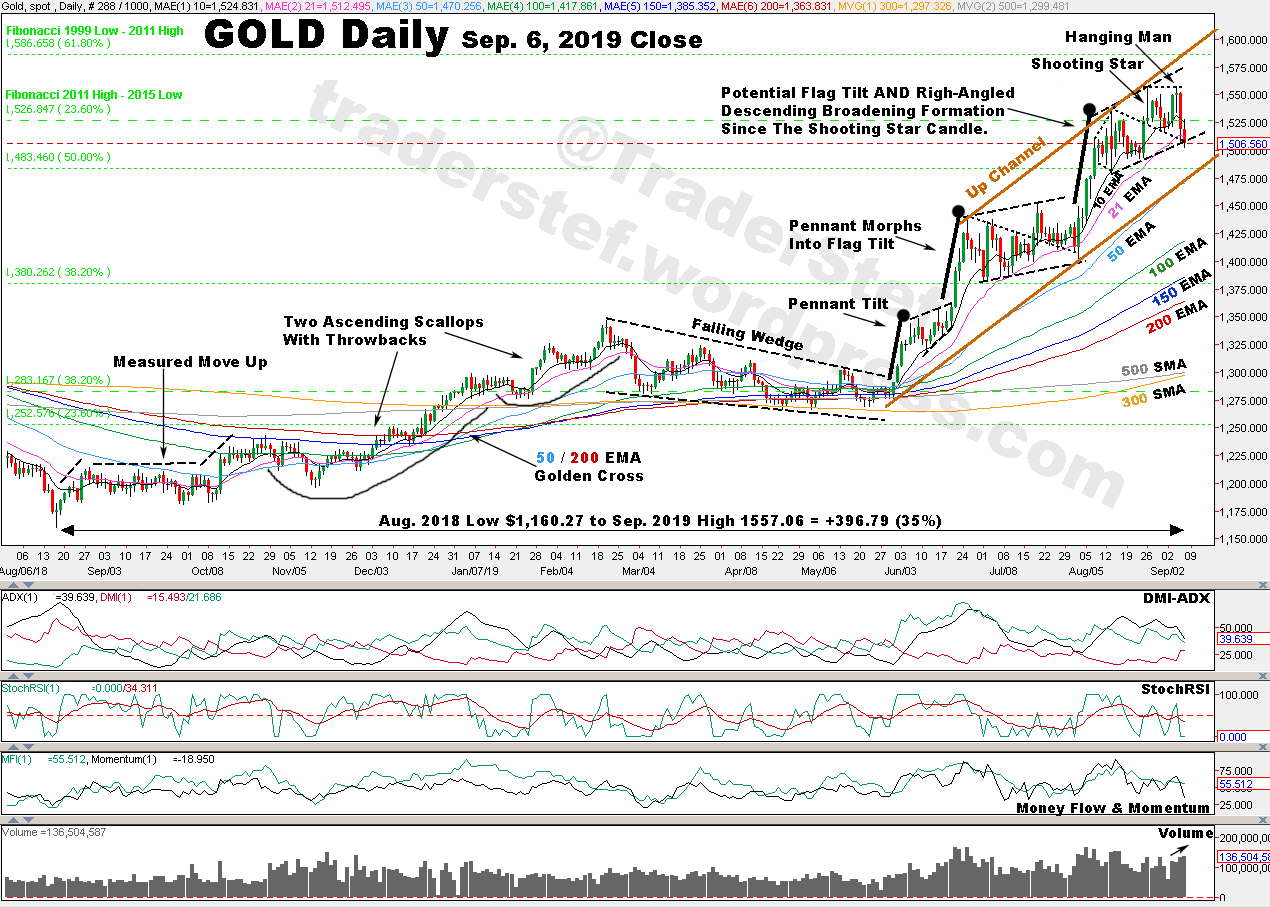 Excerpts from the Aug. 31 monthly and weekly chart analysis:

“The monthly chart remains bullish long-term but is in the process of taking a breather and a consolidation as noted in the previous monthly analysis. The $38 pullback at the end of the week confirmed that analysis.”

“The pattern that has taken hold is an Up Channel with a bearish Plunger candlestick (aka Shooting Star) print for the last week of August. Whether the $38 breather is the beginning of a larger pullback before consolidation takes place will be determined by the September news cycle. I posted an hourly gold chart on Twitter on Aug. 29 that pointed out a fractal on the chart that implied a correction was in the making. The price action made a stellar attempt at reaching the $1,586.65 Fibonacci, but no cigar. With the weekly close at $1,519, the $1,526 Fibonacci resistance is back in play. The DMI-ADX at 65 is approaching overbought territory, the StochRSI is threatening a break to the downside after bouncing along overbought territory since June, the Money Flow is rolling over, and the Volume printed lower than the peak in June for a second time… Caution is warranted in the near-term until a price consolidation takes hold and a price pivot to the upside with conviction takes place.”

It is time to review the chart patterns since the Aug. 2018 low and powerful rally that began in Jun. 2019, which added a respectful $396.79 (+35%) to the price of gold. An upside pivot launched a Measured Move Up last fall and developed into a pair of Ascending Scallops. The subsequent Falling Wedge brought out the conspiracy ghosts in full force and ended in June with a strong upward pivot into a Pennant Tilt, followed by a Flag Tilt that formed the beginning of an Up Channel with a pivot off its lower trendline. The price action is currently chopping within another Flag Tilt that may be breaking down after a bearish Shooting Star and Hanging Man candlestick printed at the rally peak within one week. The pattern at the end of the Flag Tilt is a bearish-leaning, Right-Angled Ascending Broadening Formation.

The Volume has risen over the last two trading days with a falling price, which is indicative of further downside potential. The next support level is at a confluence of the $1,483 Fibonacci, the lower trendline of the Up Channel, and the 50 Exponential Moving Average (EMA). As noted in the analysis from Aug. 31, the DMI-ADX was nearing an overbought level and has now begun to roll over, the StochRSI was threatening to break down (and it has), and the Money Flow was rolling over with the Momentum indicator now falling along with it.

Overall, the chart remains bullish with an intact uptrend despite the $54.46 price retreat. Even if the price falls an additional $20, no serious technical damage will have taken place. However, if the 50 EMA is breached to the downside with conviction, the 100 EMA would be the next support level that extends back into the price chop of the previous Flag Tilt. I remain bullish long-term, but caution is warranted in the near-term. This pullback in price can be an opportunity to add physical and/or paper trading positions after a decisive upside pivot occurs. 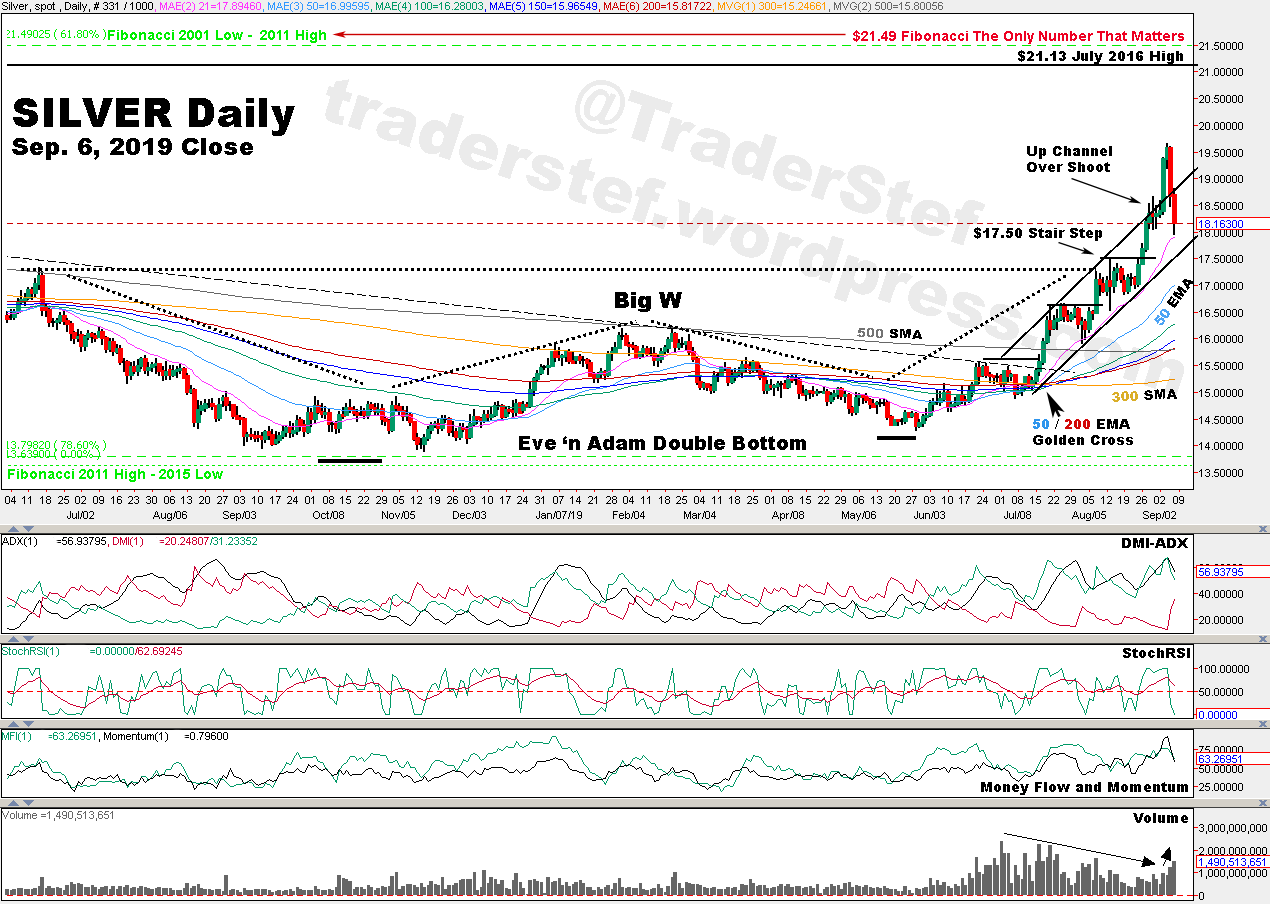 Excerpt from the Aug. 26 monthly and daily chart analysis:

“I am bullish long-term but remain cautious in the near-term until $21.49 is decisively left in the dust.”

“The daily chart is a close-up of the Eve & Adam Double Bottom and Big W pattern with a price break above the twin peaks. The 50/200 EMA Golden Cross has reasserted itself after failing the first attempt in February. All of the EMAs have realigned into a bullish setup. The DMI-ADX remains positive and the StochRSI is rising without reaching an overbought level. The Momentum and Money Flow are somewhat stagnant and the Volumes have been falling throughout the price rally since June. The divergence between a rising price and falling Volume is not a good sign in the near-term, despite the bullish stair stepping pattern. As noted on the monthly chart analysis, I remain bullish long-term but cautious in the near-term. The odds are high for a pullback and consolidation before a test of $21.49 can take place.”

The next level of substantial support is the $17.50 area, where a stair step occurred near the topside lateral of the Big W pattern. As with gold, no serious technical damage has occurred yet, and the uptrend remains intact. However, if the 50 EMA is breached to the downside with conviction, the next level of support is the $16.50 area at the next stair step. This pullback in price can be an opportunity to add physical and/or paper trading positions after a decisive upside pivot occurs.

Here are few articles and noteworthy interviews to peruse before closing up shop tonight:

The Monetary Policy Endgame… “Major global central banks continue to draw bigger guns in their battle against deflation, yet in some places, it appears to be of no avail.” – CIO & PM Rick Rieder at Blackrock

Former Fed chairman Alan Greenspan on the risk of recession… “One of the reasons that the gold price is rising as fast as it is – telling us essentially that people are looking for hard resources they know are going to have a value 20 years from now, or 30 years from now as they age.” – CNBC, Sep. 4

Here is MarketSniper with good information about technical analysis.

Are technical indicators and charts important in your trading? “What we’re looking at is God’s handwriting on the wall.”

Technical Analysis: Why it Works and its Limitations…