As the coronavirus virulence worsened and spread across international borders over the weekend, stock markets around the world were pummeled at their respective open, and gold and silver rallied as expected at the Globex and London open with only mild profit-taking early in the U.S. trading day. The stock market found no shelter, with President Trump’s legal team continuing its obliteration of the Democrats’ 21-hour impeachment argument at the Senate trial. 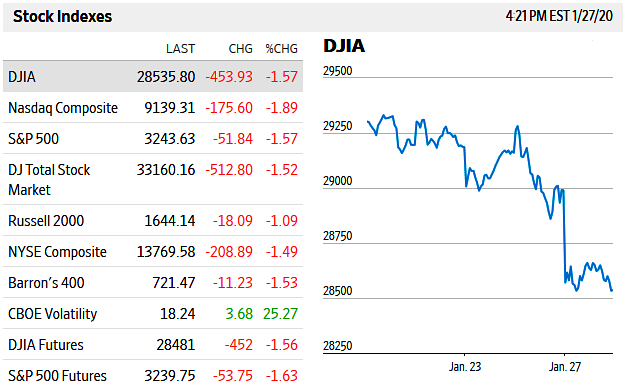 The Fed’s next FOMC meeting starts tomorrow and the announcement on monetary policy is slated for Wednesday. At the previous meeting, interest rates were kept on hold until a “material reassessment” of the economy. Fed Chair Jay Powell said there would need to be “a significant move up in inflation that’s also persistent before raising rates to address any inflation concerns.” The subsequent meeting minutes telegraphed that the Fed was more concerned about lower inflation and did not have the stomach to lower rates any further.

The Fed is concerned about confidence and optics, and a Financial Times op-ed in mid-January titled “The Federal Reserve is the cause of the bubble in everything” was not very forgiving. The most recent inflation data suggests that a rise in the Consumer Price Inflation (CPI) above 2% in 2019 was concentrated in only a few areas and that other measures have it at less than 2%. The current Fed funds benchmark rate stands at 1.5-1.75% and was NIRP’d after rates on the 10-year note plunged this morning. With the coronavirus outbreak surfacing as a major issue since the last meeting, a sharp reversal in market sentiment might force the Fed’s hand to be slightly more accommodative than REPO to preemptively stabilize the financial plumbing and blunt any near-term economic slowdown due to the coronavirus.

Fed Policy And The Wuhan Coronavirus… “Capital markets are beginning to discount the possibility that the Fed will use their interest rate hammer to offset growing economic uncertainty caused by the outbreak.” – DataTrek, Jan. 27

Fed Repos Have Plowed $6.6 Trillion to Wall Street in Four Months… “That is 34% of its feeding tube during epic Great Financial Crisis. According to the data made available on the public website of the New York Fed, since September 17, 2019 it has funneled a cumulative total of $6.6 trillion to some of  the 24 trading houses on Wall Street that are known as its ‘primary dealers.’ The giant sum has been sluiced to Wall Street in the form of repurchase agreement (repo) loans.” – Wall Street On Parade, Jan. 27

The coronavirus epidemic is unfolding into a potential global pandemic that must be taken seriously. You can follow my Twitter thread that I try to keep updated with the latest information available. Thus far, the virus has spread to at least 17 countries and up to 60 million folks in China are in a partial or full-city quarantine. Single-digit mortality rates are being thrown around the Internet and should be ignored. The appropriate method to calculate mortality rates is “deaths vs. resolved cases,” which is now 100%+ (Jan. 27 audio updates w/Dr. Henry Niman PhD.)  and will not find a realistic median for several weeks. However, it is reported that patients with this particular strain can be contagious before the onset of symptoms and it’s more virulent. Ground zero is in Wuhan, which is a main transportation hub and industrial center in China, with a population of at least 9.8 million permanent residents. For perspective, the population of New York City is estimated to be 8.3 million as of July 2018. 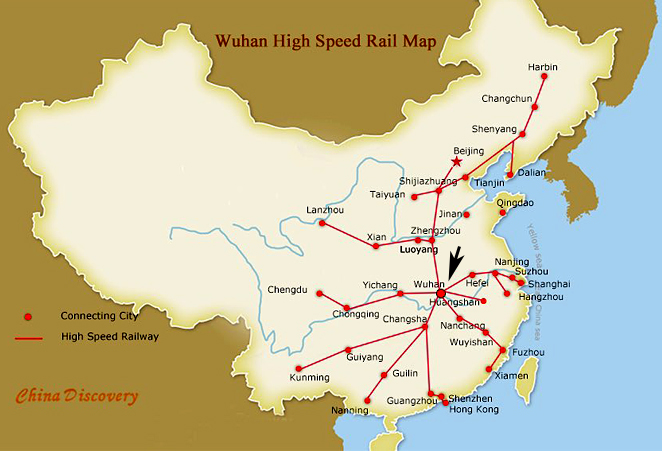 The U.S. State Dept. issued a “reconsider travel to China” level 3 advisory this afternoon. The most important piece of information to come across my desk today was the Hong Kong Med School (HKU) press conference with these key takeaways:

Let us move on to the gold technical analysis with a few additional charts. To view a larger version of any chart, right-click on it and choose your “view image” option.

The average annual gold price has been down in only four of the past 20 years. 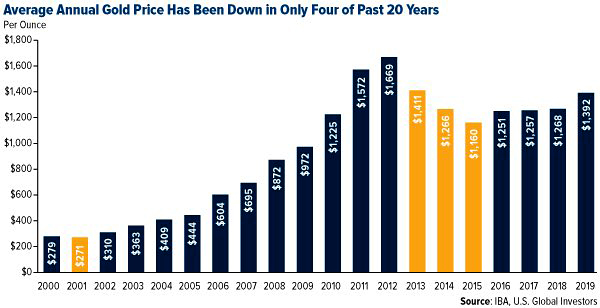 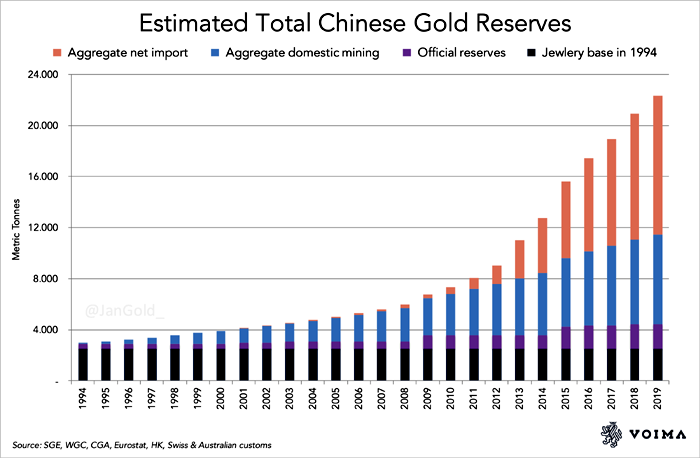 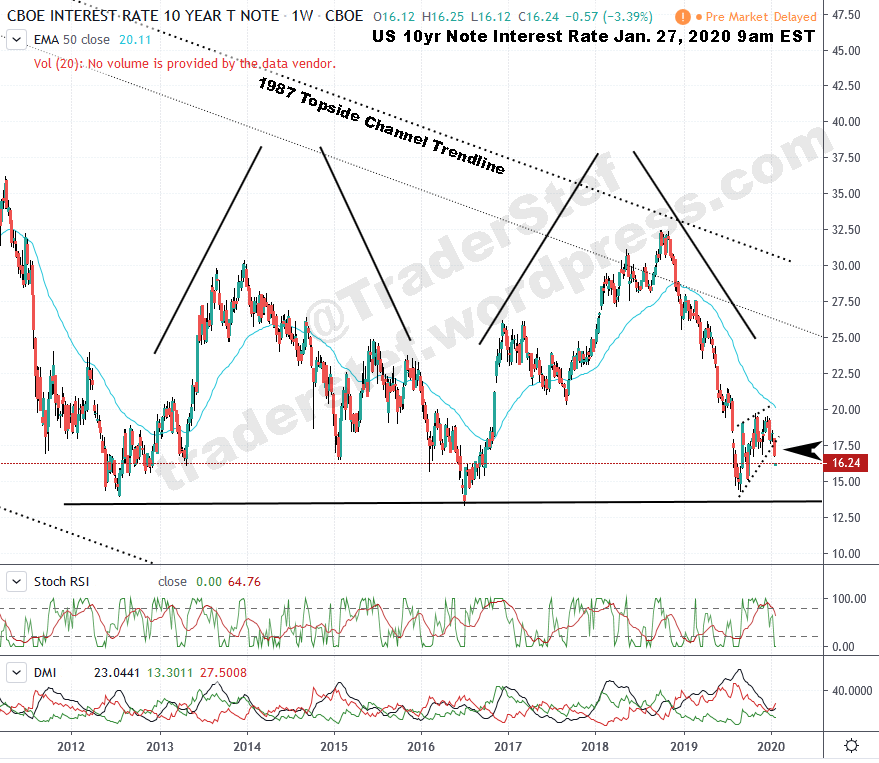 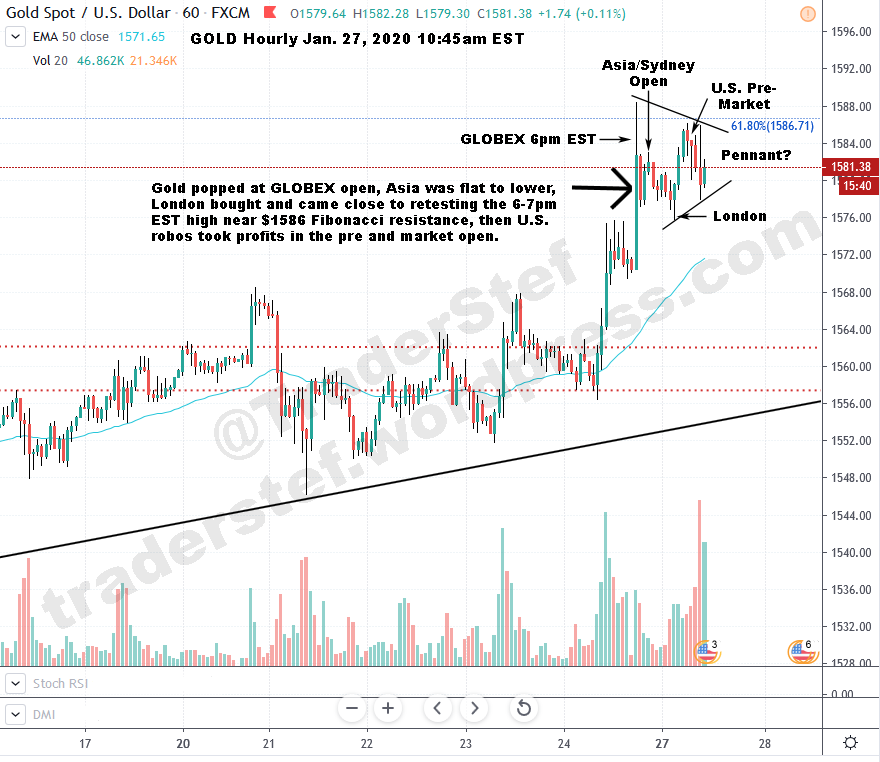 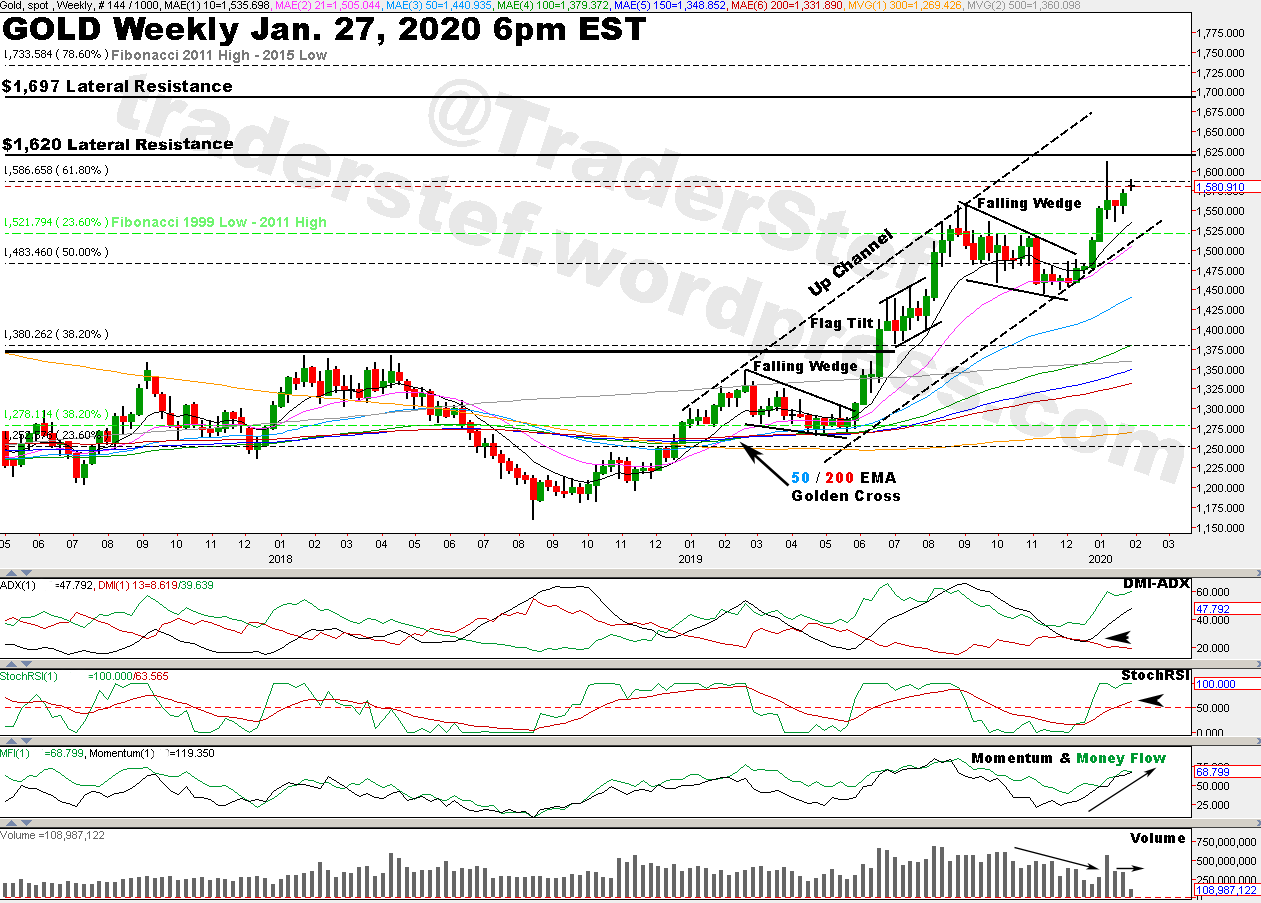 “After pivoting off the Falling Wedge’s lower trendline on Nov. 12, the gold price has risen steadily with higher lows and higher highs… The $1,446 low found support from large buy Volumes that occurred during the August breakout from the previous Flag Tilt pattern. The price closed this week slightly below the topside trendline of the Falling Wedge and $1,483 Fibonacci level, and closed above the 10 Exponential Moving Average (EMA) during the last two trading sessions for the first time since the week of Nov. 4… Volumes have continued to fall along with price during this pullback and consolidation, which increases odds that the Falling Wedge has reached its bottom. The Momentum and Money Flow pivoted upwards for the first time since the Flag Tilt, and the StochRSI appears ready to break away to the upside. The (DMI-ADX) ADX has poked its head back under the DMIs that remain flat and in a positive trend, which sets up the preferred dynamic for an Alligator Tongue pattern if the price breaks out… If buy Volume picks up as we approach Christmas and the New Year, there is a good chance the price will break away from the Falling Wedge and challenge $1,500 and the $1,526 Fibonacci level as we ring in the New Year.”

“Following the pivot out of a Falling Wedge in early 2019, an Up Channel pattern confirmed with a second point along its lower trendline, which was also a pivot out of a Falling Wedge that followed the Sep. 2019 high and culminated in a breakout over Christmas and the week leading up to the New Year… $1,500 was breached after the U.S. Embassy was besieged by Iranian-backed militias in Iraq on Dec. 31. Following a drone strike that killed General Soleimani and militia leaders on Jan. 2, the $1,526 Fibonacci level was taken out decisively and rallied to the $1,586 Fibonacci… Iran fired ballistic missiles at U.S. forces today and spiked the price to $1,611 shortly after 6pm. The world is now holding its breath while waiting on a U.S, response. I remain bullish long-term and anything is possible right now…”

The hourly chart highlights an uptrend since Jan. 17, along with a bullish Pennant (update: morphed into a Half Staff Flag during the early morning of Jan. 28) that engulfs the price spike that followed weekend news on the coronavirus. It would not take much for the price action to revisit the $1,611 high and enter the gap between $1,620 and $1,697, where not much resistance exists until the $1,733 Fibonacci (see weekly chart). The $1,620 and $1,697 laterals originate from the choppy price action between the $1,920 high in 2011 and downside breach of $1,522 in 2013, and $1,733 is where the Up Channel’s topside trendline will intersect.

The $1,586 Fibonacci was not retested until this morning after a brief consolidation off the $1,611 high. Automated trading platforms are efficiently scalping profits out of every short-term spike in price that generates an overbought condition on shorter time period charts. The price remains stable at $1,580 while typing this analysis.

Despite brief episodes of overbought conditions since Jan. 7, all indicators and studies on the weekly chart remain bullish with an intact uptrend. All of the moving averages are lined up under the price action, as the Golden Cross has done its job since Feb. 2019 and shows no sign of reverting anytime soon. The DMI-ADX is trending positive, along with a classic Alligator Tongue setup, the StochRSI is nearing an overbought condition but has room to allow the price action to trend higher, the Momentum and Money Flow continue trending upwards, and the lower Volume print on this weeks candle only reflects the Volume since Sunday’s 6pm open on the Globex.

I remain bullish long-term, but cautious in the near-term until the $1,611 high on the Plunger Candle (ask Shooting Star) is taken out with conviction and without hesitation.

Here are a few articles and interviews to peruse since my last gold analyses before closing up shop tonight: