If you did not have an opportunity to review Part 1, I suggest you do so before continuing. There are details in the article regarding the trade patterns of large speculators and bullion banks, as well as gold’s analysis from July that I will not rehash today.

Smart Money Ace Up the Sleeve and a Gold Chart Update – TraderStef, Jul. 22

Let us move forward because there is a lot to cover. Here are pertinent news items since late July, then on to the most recent Commitment of Traders report and gold’s technical analysis. To view a larger version of any chart, right-click on it and choose your “view image” option.

Why gold will remain one of the safest ports during the turbulent times ahead – The National, Aug. 5 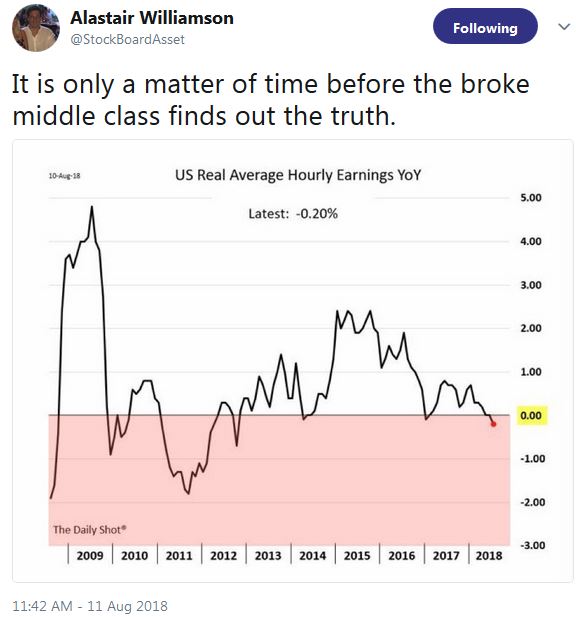 Look Away From the U.S. and Gold Prices Are Soaring Higher – Bloomberg, Aug. 13

When a Gold Giant Throws in the Towel… “The company’s gold production has dropped more than 25 percent since 2013. Production is expected to fall even further… Recently, the company reported a negative free cash flow. Finding gold isn’t as easy as it used to be, and it was never that easy in the first place… In February of this year Barrick predicted its eighth straight drop in annual production. Meanwhile, the cost of producing an ounce is climbing… These problems have plagued companies like Barrick. However, for gold investors it could mean wealth creation. Those who buy now are entering the market when global players are forecasting fewer finds. As the law of supply and demand takes hold investments could rise.” – Blanchard, Aug. 13

A flashback on peak gold from October 2017 with Goldcorp’s CEO, Ian Telfer… 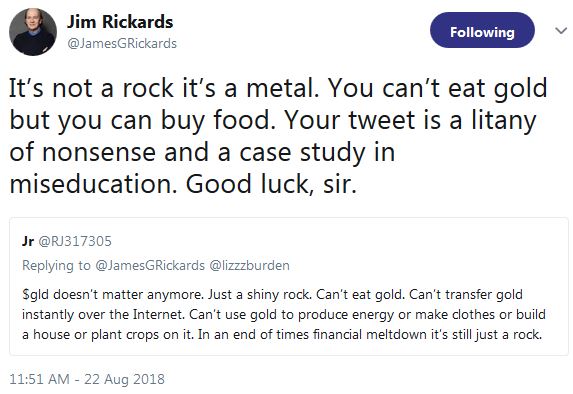 Reinoud Bogert chimes in on the developing Russia gold hoard…

Russia Buys Over 800,000 Ounces Of Gold In July After Dumping US Treasuries – GoldCore, Aug. 21

Trump may launch a campaign to weaken the dollar and trim the US trade deficit – South China Morning Post, Aug. 22

Why Trump Is Pressuring the Fed on Rates… “U.S. corporations are loaded with risky debt, making them vulnerable to higher interest costs.” – Bloomberg Opinion, Aug. 23

Time has come for Russia to finally ditch the U.S. dollar – Foreign Ministry… “Russia will definitely respond to Washington’s latest sanctions and, in particular, it is accelerating efforts to abandon the American currency in trade transactions, said Deputy Foreign Minister Sergei Ryabkov. ‘The time has come when we need to go from words to actions, and get rid of the dollar as a means of mutual settlements, and look for other alternatives,’ he said in an interview with International Affairs magazine. ‘Thank God, this is happening, and we will speed up this work,’ Ryabkov said, explaining the move would come in addition to other ‘retaliatory measures’ as a response to a growing list of US sanctions.” – RT, Aug. 24 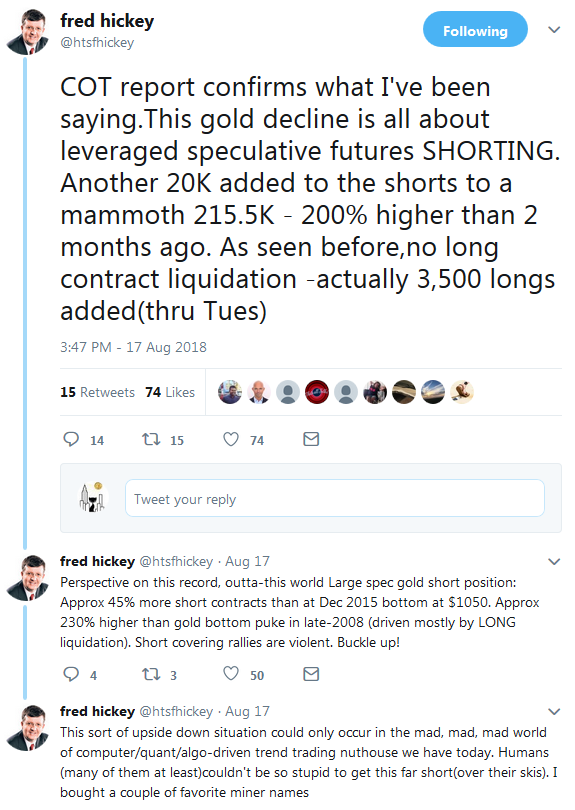 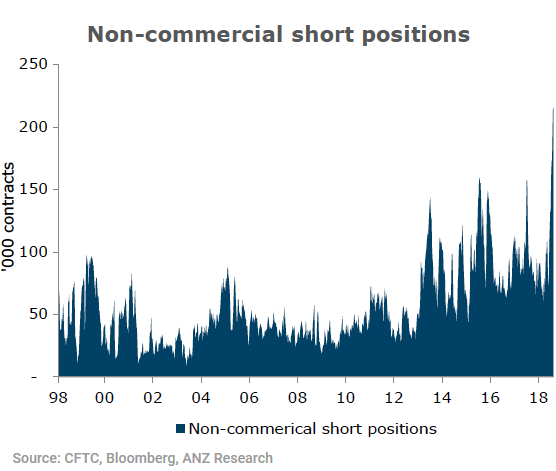 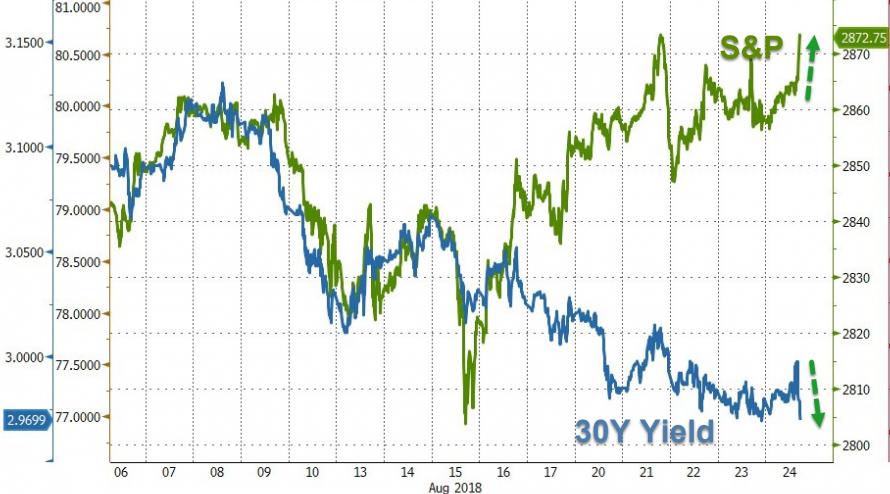 The Time is Now – Jim Sinclair & Bill Holter – The World Is Venezuela… “Renowned gold and financial expert Jim Sinclair and financial writer Bill Holter get ready for the reset in the price of everything including gold and silver. Sinclair also says, ‘It’s going to be a Friday to Monday event. There is going to be an explosion, and the explosion is a change. It may blow your mind, but the explosion would not be three or four months or a year in upticks in these items (gold and silver prices). Oh, they are going to uptick. That is for sure. The finality of this is going to be the reset… Thank God you know this now and do the necessary. Gold will be the last man standing. After June of 2019, there will be an entire new system monetarily only known to the early advocates of the theory of ‘Free Gold.’” – Jim Sinclair, Aug. 20/Aug. 25 Video Interview 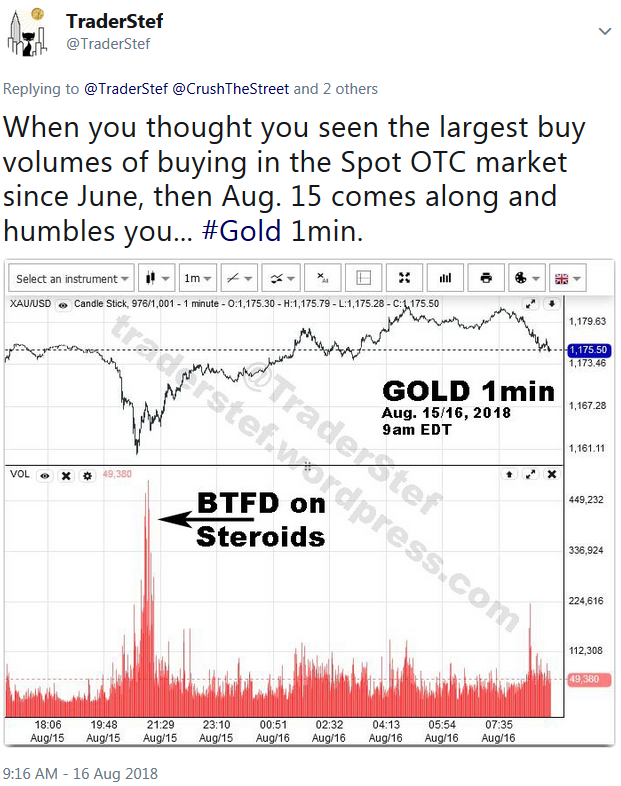 Yes, the COMEX paper playpen and the Commitments of Trader Report (CoT) are a completely over-leveraged fraud, along with 5,000 tons of gold EFPs and 2 billion ounces of silver EFPs sent to London that can never be delivered.

Despite the fraudulent paper chase, seasoned precious metal investors keep eyes on the data because it offers clues on low-risk entry points for physical, long-term core positions, as well as for paper swings and laddering core positions. As usual, the commercials (bullion banks) were happily covering stale shorts and adding longs while the large specs (hedge funds) drove the algorithmic downside momo play. Commercials began buying in earnest, alongside record volume spikes beginning on Jun. 25, marking the first low-risk zone at $1,240-$1,260, then tighter zones all the way down to the $1,160 low.

Here is the most recent CoT and Open Interest (OI) data as of Aug. 21, as reported on Aug. 24, overlaid with the gold spot weekly chart as of the Aug. 24 close. Note the net position pattern of highs and lows, and total OI is the fine green line with its lows marked by arrows at the base vs. gold price trends. The return to an uptrend in gold is well overdue in extremely oversold, lopsided conditions. There is too much focus in the financial press about the large spec short positions, while ignoring what the commercials are doing. Gold rallied $48 last week, and all I heard were crickets in the arena. 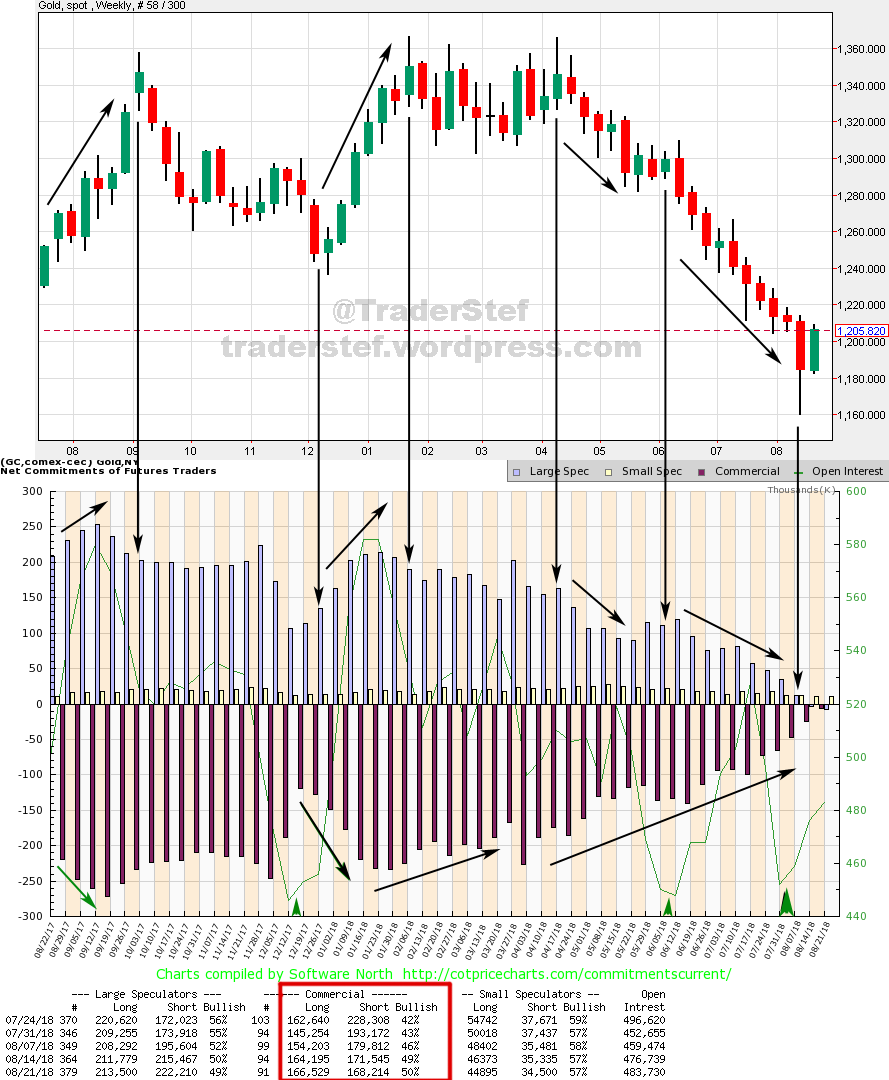 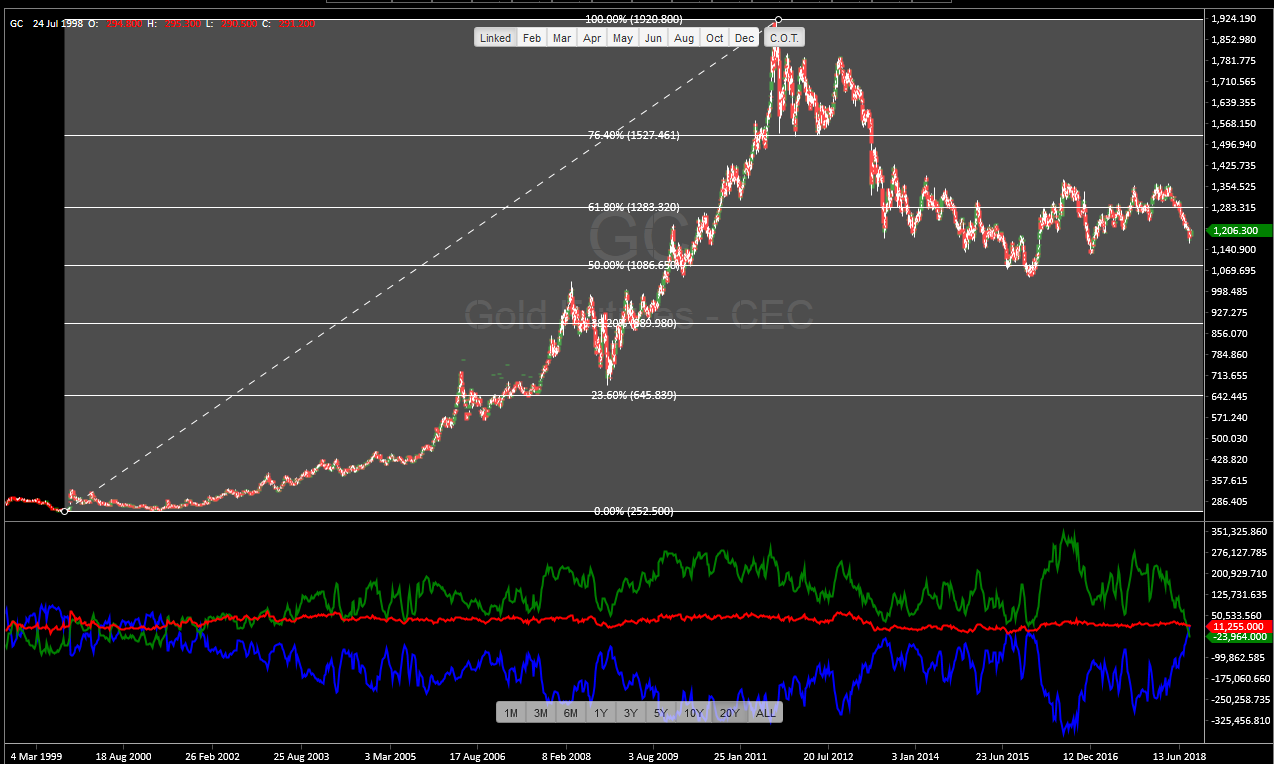 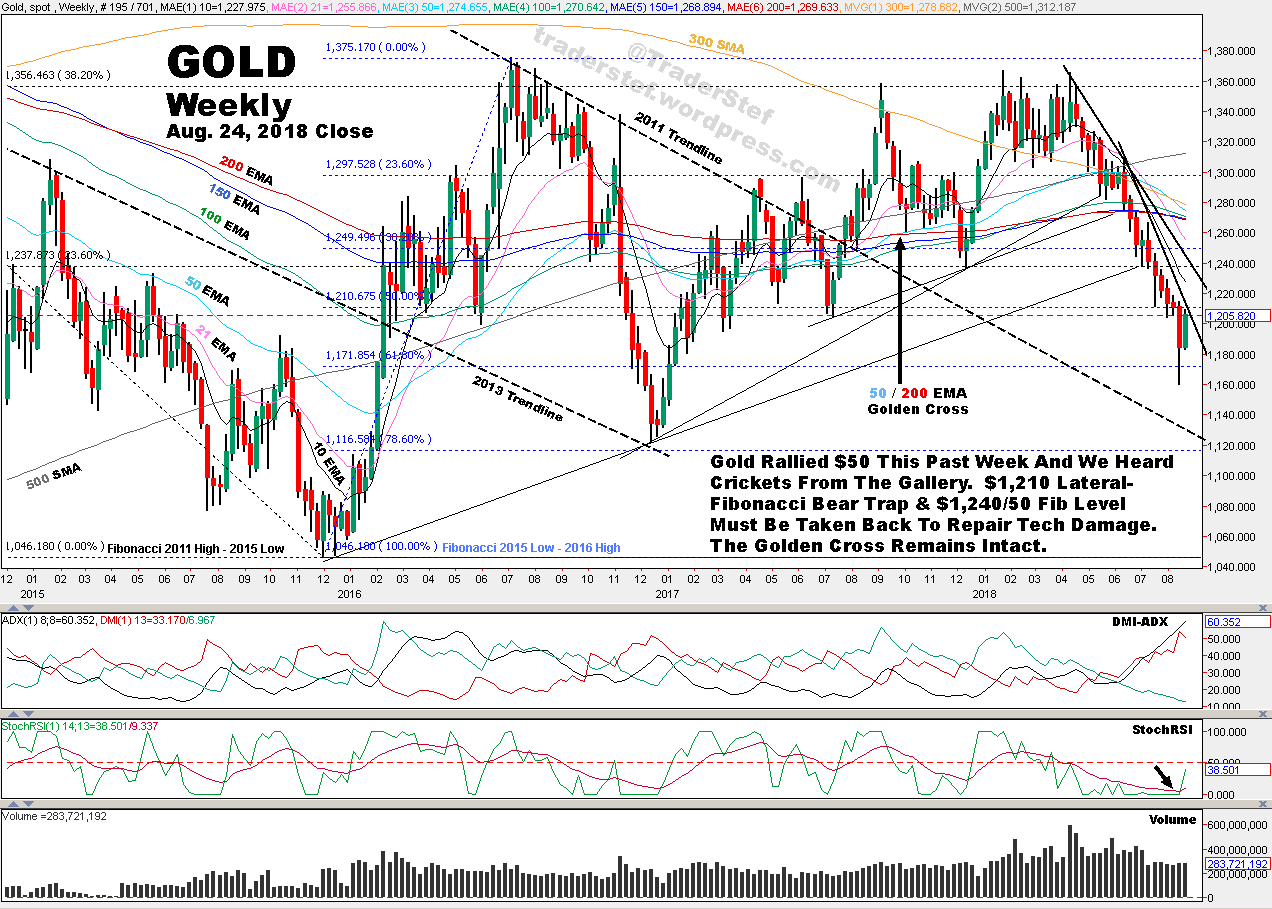 Gold printed a low of $1,160.27 the prior week, then a high of $1,208.52 and a close at $1,205.82 this past week. Serious technical damage did occur, with a break of the lower trendline drawn up from 2015, but the Golden Cross remains in play on the weekly, with a $5 spread before any potential Death Cross, and the chart is still printing higher lows since Dec. 2015. The POTUS appeared again, as I suspected on Aug. 20 that he would chime in soon to slam the Fed a bit more about interest rate hikes and a strengthening dollar. Last week’s candle came close to a Bullish Outside Reversal with the $48 run, but not quite enough. This week should clarify if the current pivot is a dead cat bounce or a breakout of a Bear Trap pattern back above the $1,210 Fibonacci lateral. There are multiple pivot points along $1,210 going back to 2015, and the CoT is surely primed for a major short squeeze. The DMI-ADX is at its peak, and the StochRSI has broken back into a near-term bullish indicator. I remain bullish long-term, and odds are leaning to at least a decent bounce near-term as the seasonal low pattern was past due and the world is looking dicier on every level as each day passes.

Lastly, here is an Elliott Wave count for gold from CaptainWave via 321Gold on Aug. 23… 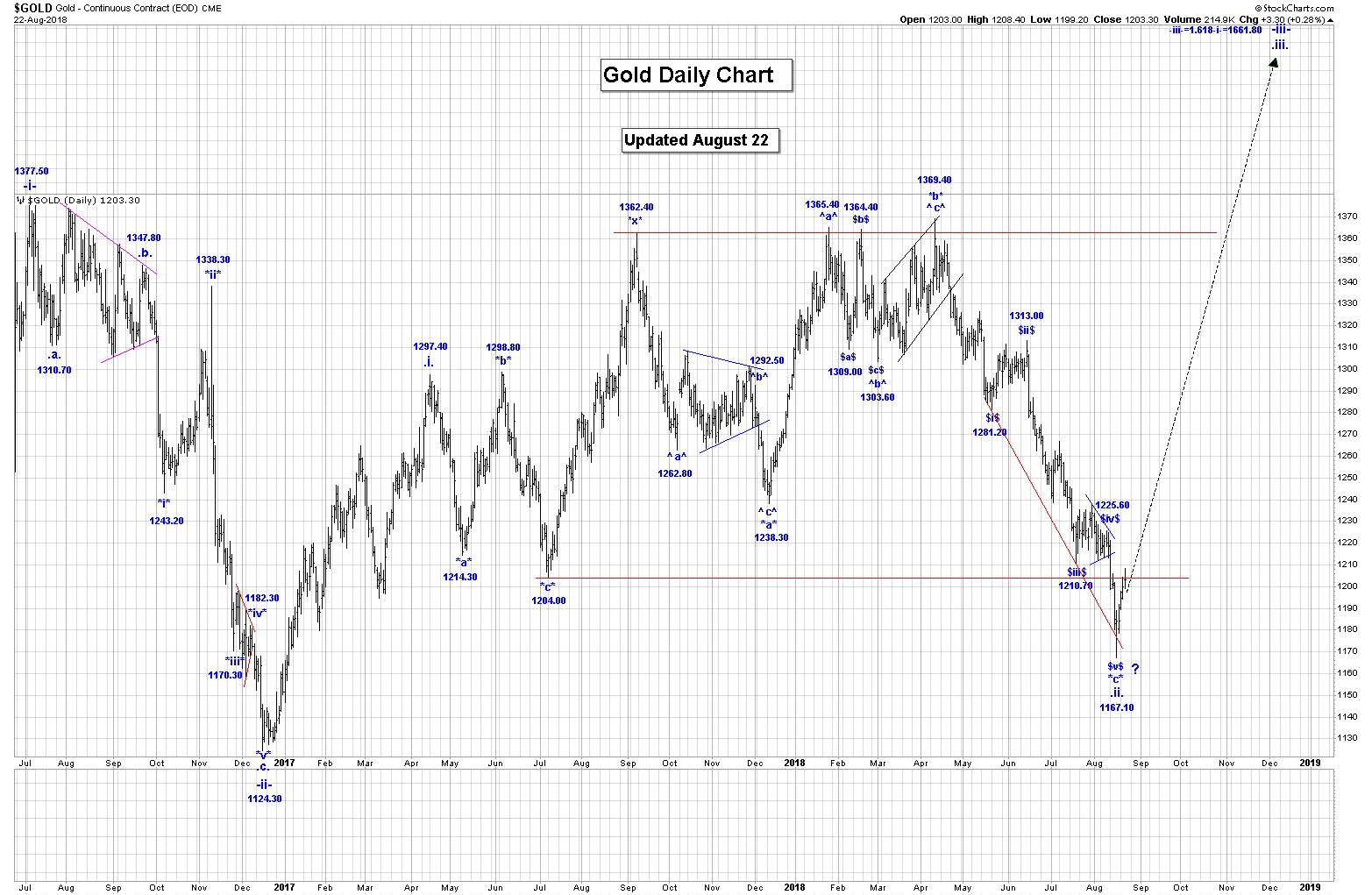 The Good, The Bad, and the Ugly Finale – Greatest Standoff EVER 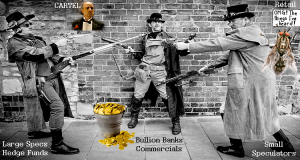