I received a lot of heat from trolls on various social platforms after publishing Spoofing the Gold and Silver Ambulance Chasers Part 1. I suspect this time will be no different. Maybe we will have a Part 3 at some point. The manipulation topic is broad and littered with nuances, impossible to cover within short articles meant to encapsulate an issue rather than write a book about it, and it is honestly not worth the loss of brain cells to rehash every possible detail spanning almost two decades of whiners that do not offer a solution to precious metal traders or investors on the street. Hence, here is a brief excerpt from Part 1:

“It is easier to blame something else for our shortcomings than to focus on practicality and the bottom line for precious metal investors: realistic and reasonable analysis focused on profit and capital preservation based on market conditions and price action with proven methods to execute low-risk entries…

Unfortunately, sanctioned manipulation is legal, and there is not a darned thing you can do about it, but you can mitigate counterparty risk by being aware of market conditions and educate yourself in technical analysis to assist in sidestepping the mindless wave of algorithms that dominate our markets…

Note that manipulation occurs across all asset classes. A smoking gun of government-sanctioned manipulation in gold and silver executed for the purpose of financial stability are extremely rare and unlikely to be identified or litigated successfully. What we do have is a growing list of traders and trading desks that manipulate-spoof the financial markets for their own benefit, then rat on each other along the food chain to cop a plea deal, incur a lesser fine, or minimize jail time. Also note that ‘manipulative and deceptive schemes’ took place for years along gold’s rocket shot to $1,920 per ounce, on both sides of the trade!…

When gold is manipulated to the upside, crickets are heard from the precious metal bleachers, but when a market and/or news-driven event move the price down $10, an infestation of manipulation screams are heard deep and loud like a Sasquatch in the deep forest at the stroke of midnight.”

As gold rallied over the last few weeks ahead of today’s greatly anticipated December FOMC meeting results, the manipulation chatter bubbled up again about what happened to the gold price back in April of 2013. I will get to that in a moment with a chart, but first is a brief overview of the money printing policy initiated by Ben Bernanke for context.

In November of 2008, the Federal Reserve held approximately $800 billion (thanks to TARP) in Treasury notes on its balance sheet prior to the Great Recession. The Fed began its first Quantitative Easing (QE1) program, buying $600 billion in Mortgage-Backed Securities (MBS) in late November. By March of 2009, the Fed held $1.75 trillion in Treasury notes, TBTF bank debt, and MBS. By June of 2010, the balance sheet ballooned to $2.1 trillion. In November of 2010, QE2 launched with another $600 billion in Treasury securities by 2Q11. In September of 2011, the Fed launched Operation Twist (OT) to buy longer-dated Treasuries and sell a portion of shorter-dated issues. In September of 2012, QE3 (aka “QE to infinity”) launched with an open-ended program buying $40 billion of MBS per month, maintained the OT program, and planned to keep interest rates near zero (ZIRP) until sometime in 2015. In December of 2012, the FOMC increased the QE3 open-ended purchases to $85 billion per month. In June of 2013, Bernanke officially uttered the concept of “tapering” the Fed’s QE monetary policy after a few months of rumor, and it would begin at a time contingent upon incoming economic data. Bernanke postulated that all QE programs would end sometime in 2014 and suggested that when inflation hit a 2% target rate and the unemployment rate dipped to 6.5%, a tapering program that would roll Treasury debt off of the balance sheet — along with lifting interest rates — would be appropriate. Official QE ended in October of 2014 after accumulating $4.5 trillion in assets. The first .25% interest rate lift out of ZIRP did not occur until Janet Yellen’s December 2015 FOMC meeting. The truth of the matter is the Fed is moving cash into circulation as it continues the great TaperCaper (see the updated H41 Dec. 13, 2018).

That is enough of Fedspeak for today. Let’s put an end to the peasants’ menagerie and solve the bankers’ robbery of gold on tax day 2013. To view a larger version, right-click on it and choose your “view image” option. 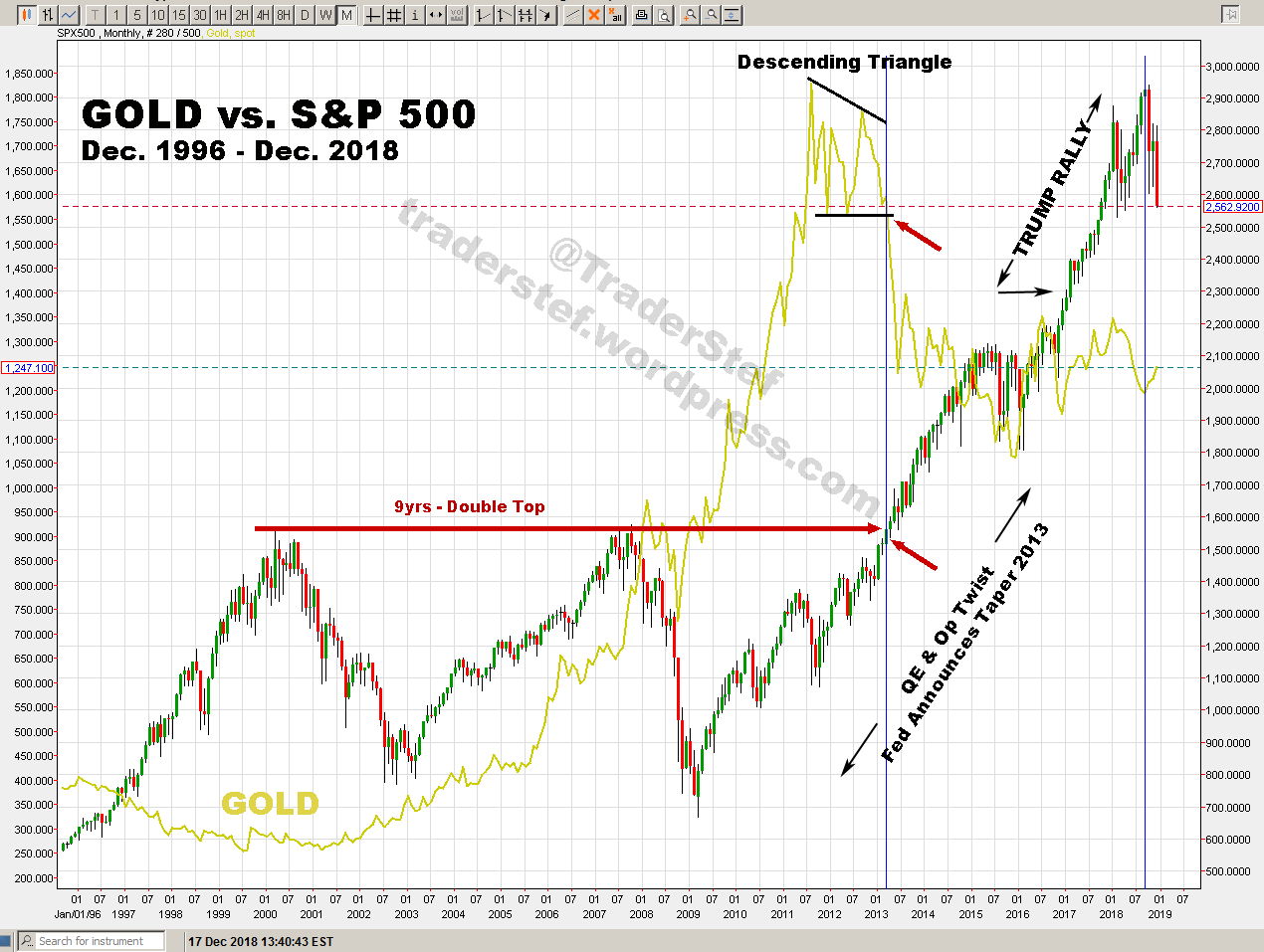 Stare at the chart for a while and compare it to the QE synopsis.

The most important confluence is where the S&P 500 Eve & Eve Double Top lateral extends to its upside breakout in April of 2013, which happens to be exactly where the price of gold broke down through the lower trendline of a bearish Descending Triangle that followed a 2011 September-October Adam & Adam Double Top. Smart money could smell the breakout that was fast approaching in the equity markets. It took 13 years and included 4 years of QE for the S&P 500 to finally break even. Institutional money immediately took their gold profits off the table as taper chatter flowed through the financial grapevine and began moving large amounts of capital into an equity market juiced by several trillion dollars of free-money rocket fuel to capture that momo play.  That is reality, with no conspiracy required and the ‘cartel’ gamblers had a spoofing good time surfing on the coattail of capital flows.

Following the FOMC meeting today, gold lost a measly $5 after opening at $1,249 and closing at $1,244. An in-depth analysis will come later in the month after the financial markets have time to digest today’s mayhem. In the meantime, consider the following movie clip as a parody for blabbermouths that distract Woody from what he really needs to do. 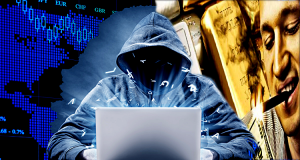