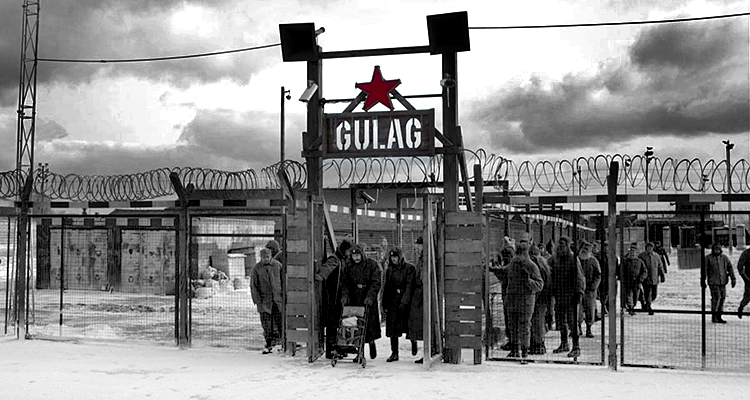 For those who are unfamiliar with the history of the Soviet Union Gulag, it was a network of prisons and work camps where political prisoners and criminals were sent. Creation of the “Main Camp Administration” began in 1918 and was the result of the Russian Revolution that started in 1917. Their numbers exploded during Joseph Stalin’s reign of terror (aka the “Great Purge”) in the 1930s, where they acquired the infamous reputation as being concentration death camps in remote regions of northern Russia and the Far East. Every red dot on the following map was a Gulag location. 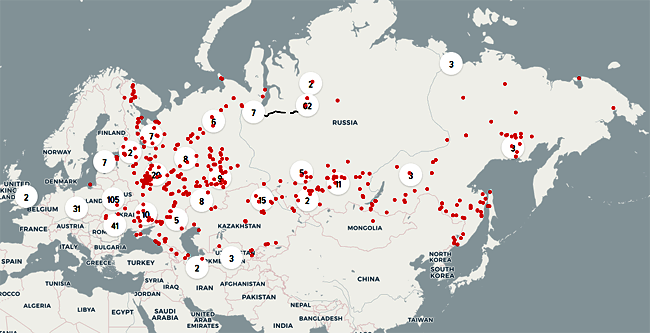 “From 1918 to 1987, Soviet Russia operated a network of hundreds of prison camps that held up to 10,000 people each. When Stalin launched his infamous purges in 1936, millions of so-called political prisoners were arrested and transported to the gulags without trial. The first wave of prisoners were military and government officials; later, ordinary citizens—especially intellectuals, doctors, writers, artists, and scientists were arrested ex nihilo.”

Without a doubt, this brief article cannot possibly cover all the bases and document a disturbing pattern taking shape in the U.S. and will likely elicit nasty responses in the modern era of woke social media. To be clear, in no way am I inferring that Stalin’s reign of terror or Hitler’s National Socialist ideology equate to the current political and revolutionary atmosphere in the U.S. But it does appear to be creeping slowly in that direction when a PBS lawyer is captured on video calling for children of Republicans to be put in re-education camps, and Seattle fancies the thought of abolishing its police department and has plans for BLM indoctrination camps. Those are only two examples of a nasty flavor of group-think taking shape across an ideologically bifurcated populace in the U.S.

On Jan. 9, 2021, I published “Suppression of Organic Liberty with a Digital Garden” in response to the hyperbole over the Jan. 6 protest on Capitol Hill and opined on the following observations:

“The U.S. founding fathers must be rolling over in their graves to a brand of ‘insurrection’ music that is being repeatedly played across the mainstream spectrum. The band is filled with agent provocateurs that have played the instruments in tune to a portion of the citizenry that suffers from Stockholm syndrome with a dash of willful blindness. The following are the actual words from the POTUS during the ‘Save America March’ vs. echoes of Joseph Goebbels propaganda that is living vicariously through incestuous racketeering by media conglomerates, irresponsible journalism, pockets of corrupt judiciaries that refuse to examine evidence, a 1984-style tyranny on your doorstep, and political hypocrites that bow to the unveiling of a global governance landscape with assistance from a feckless-establishment Manchurian candidate who recklessly categorized political opponents as Nazis.” – TraderStef

More recently, we have the following three gems:

The BBC and CNN have reporters who sing the praises of the Führer… “Both of these broadcasting giants of the liberal elite have contributors who said the Führer was right? We need to talk about this. This is not normal in any way whatsoever. It speaks to a serious sickness at the heart of the so-called liberal establishment.” – Spike, May 24

DOJ quietly acknowledges there was no sedition at the US Capitol… “Media hyperbole was the root cause of fabricating crimes that didn’t exist.” – Law Officer, Mar. 30

FBI Asset-Turned Whistleblower… “Director Christopher Wray and the FBI pushed a ‘white supremacist’ false narrative during the lead-up to the Jan. 6, 2021 Capitol Hill incident, while ignoring evidence that Marxist Antifa, BLM, and CPUSA were plotting multiple domestic terror plots.” – The American Report, May 18

In the meantime, violence in the streets of Portland and other cities across the U.S. continues on a daily basis. For instance, Portland was another wash, rinse, and repeat episode of “peaceful protestors” last night that are self-proclaimed Marxists and anarchists on the road to insurrection and revolution. Not only are some committing violent crimes, but some are felons, repeat offenders, and they are promptly released without charge or out on bail by mysterious dinero while awaiting trial. Despite having to avoid death threats in the U.S. by relocating to the U.K., Andy Ngo continues reporting about the ongoing insurrection in the U.S. 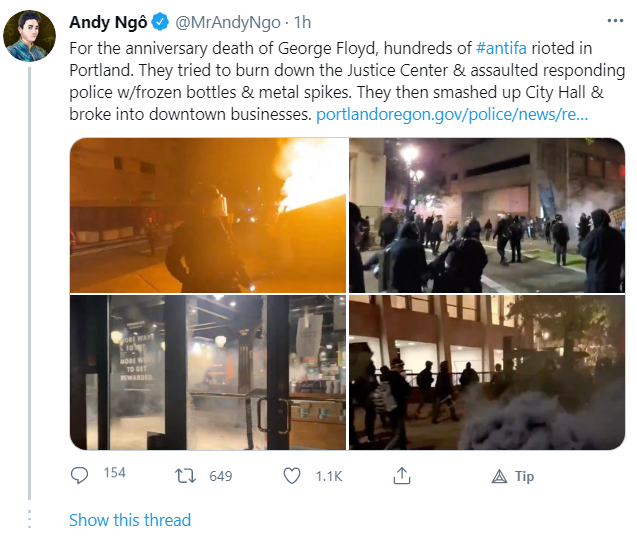 Let’s not forget one example of an agent provocateur (aka Jayden X) who was questioned and released by the FBI for blatantly filming the Capitol Hill protest from outside and within the premises on Jan. 6 while instigating mayhem and intimidating capitol police officers on camera. U.S. authorities have finally indicted him and the DOJ confiscated the $90,000 made from his endeavor with a CNN reporter sidekick. He actually bragged about posing as a Trump supporter and appeared on national television to tell his story. He still has the blood of Ashli Babbitt on his hands while walking freely outside of a prison cell.

I bring all of that up because there are over 440 individuals that have been charged or are being held indefinitely in a jail cell on multiple counts related to the Jan. 6 protest, and only one has pleaded guilty. The FBI even raided the home of a woman in Alaska this month in search of Pelosi’s missing laptop, but they discovered it was a case of mistaken identity by an anonymous informant. Many will blame the Patriot Act for what we are seeing, but it appears to be more sinister when we consider the current administration’s plans.

We Should Be Very Worried About Joe Biden’s “Domestic Terrorism” Bill… “Joe Biden used to brag that he practically wrote the Patriot Act, the Bush-era law that massively increased government surveillance powers. Now he’s hoping to pass a further ‘domestic terrorism’ law. The danger is real that the January 6 Capitol attack will be used as an excuse to severely curtail our civil liberties.” – Jacobin, May 25

My final point this evening is Richard Barnett, as his story brings home the title of this article. Richard is 60 years old and experienced the American Gulag in Washington, D.C. after his indictment on Jan. 29. He was charged with trespassing, disorderly conduct, and possession of a “dangerous or deadly weapon,” a walking stick that doubles as a stun gun (it had no batteries). He was made famous for sitting in Pelosi’s chair and propping his feet on her desk. 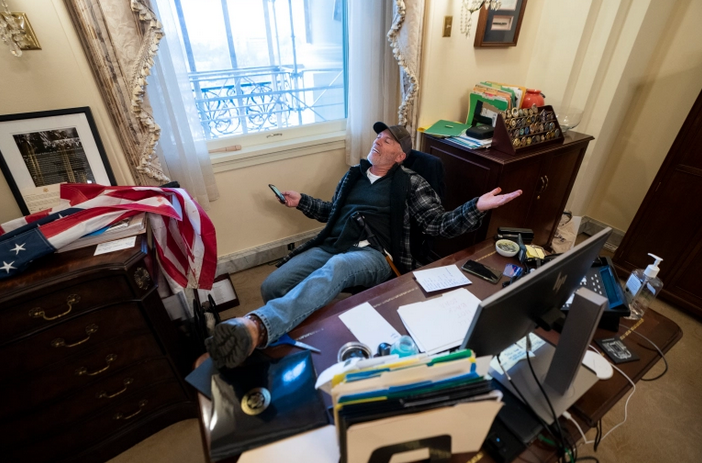 After thoroughly reading the following article, you’ll understand why one of Richard’s most basic rights preserved by the Constitution was violated, which includes the right to a speedy trial written into the Due Process Clause of the Fourteenth Amendment. Many remain behind bars.

Man in Pelosi’s Office Discusses Jail Conditions for January 6 Detainees… “Barnett’s inaugural experience in America’s prison system quickly soured after he was transported to the nation’s capital. Like dozens of people charged with offenses related to the Capitol building protest, Barnett was ordered to remain behind bars in a D.C. jail with no chance to make bail even though he has no criminal record and faces no violent charges… Unfortunately for dozens of political prisoners held hostage by their own government, freedom appears to be a long way off.” – American Greatness, May 25

I do not like where we are heading as a country, as the open letter from Flag Officers 4 America is painfully clear about the situation. Divine intervention would be nice right now, but getting your financial house in order is your job and of utmost importance at the moment. Got some gold and silver? 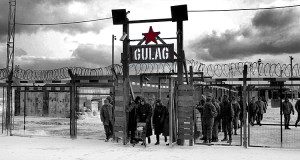