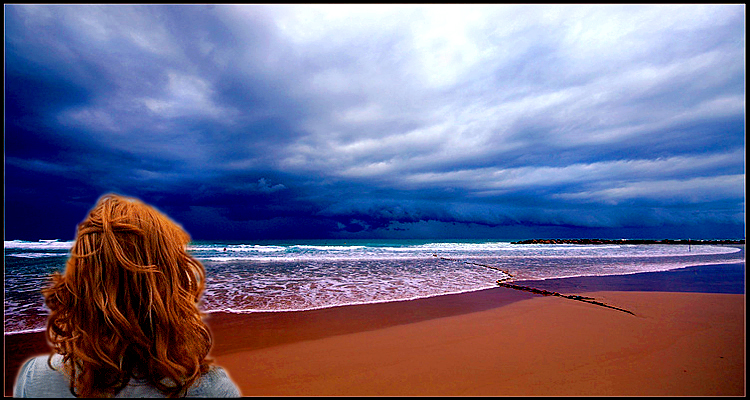 The supply of copper doubled between 1994 and 2014. Production peaked in around 2012 and has fallen sharply ever since. The supply deficit in 2019 is projected to be much larger than 2018, and the estimated gap between supply and demand will continue growing until at least 2035. 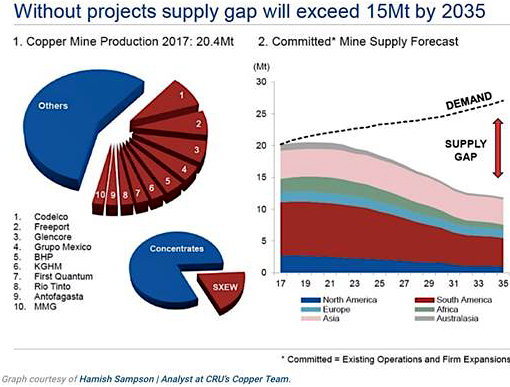 Source: Ahead of the Herd – The Coming Copper Crunch

Freeport-McMoRan’s ($FCX) Grasberg mine in Indonesia is expected to contribute only 1% of the global copper supply in 2019, down from 6.5% in 2002. 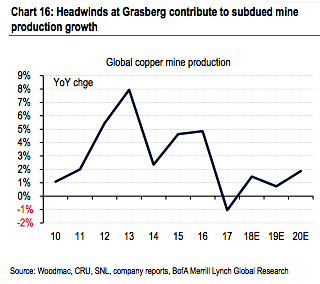 The source of new supply is currently concentrated in just five mining operations: Escondida (the highest-producing copper mine in the world), Cobre Panama, Quebrada Blanca, Spence, and Kamoto. Combined, the production from those mines will be responsible for 80% of the global supply through 2022.

China consumes approximately half of the world’s copper. Recent data shows that its imports of unwrought copper increased by 26.5% versus the same time last year. During 1Q19, imports of refined copper were down by 4.3% after importing record tonnage in 2018. New smelters and refineries that were recently built in China contributed to a contraction of refined copper imports, but an expansion of downstream industry has increased demand for copper concentrate. Imports of copper ore and concentrate were up 10.4% in Mar. 2019 versus last year and slightly down from a record set in Feb. 2019. Imports of copper concentrate were up 20% in 1Q19. On an annualized basis, imports of concentrate will easily surpass the record 19.7million tonnes set in 2018. China’s increased demand for copper has dampened concerns over its economic growth and trade war ramifications.

China initiated a complete ban on specific categories of scrap copper imports beginning in 2019, in addition to a 25% tariff on imports from the United States. A decline in the price of copper since the 2017-2018 highs that followed a significant rally off the 2015-2016 lows has rallied again during 1Q19 due to expectations of an expedited U.S. trade agreement and supply disruption concerns coming to the forefront.

After 40 Years, Top Copper Producer Struggles to Stay Ahead… “The Chuquicamata mine has helped Codelco dominate the copper market as the world’s number one producer of the metal. Now, the state-owned company is at risk of losing that title. The vast pit known locally as “Chuqui” is being shut, replaced by an underground mine that will take five years to reach its full output of about 300,000 tons of copper a year. Company officials, meanwhile, remain confident that the Chuquicamata transition and other projects will allow it to maintain its output. ‘It’s looking increasingly like Codelco might be a 1 million ton producer and not the 2 million tons that they’ve always promised,’ said Colin Hamilton, managing director for commodities at BMO Capital Markets. ‘The potential impact on the future copper market is still underappreciated, but is now so pertinent that it simply cannot be ignored.’” – Bloomberg, Apr. 15

Global Stocks Wipe Out Weekly Gains As European PMIs Slump… “If China wishes to grow Europe’s economy – its biggest trading partner – it will have to launch even more stimulus.” – Zerohedge, Apr. 18

The top copper ETFs via Investopedia as of Apr. 2019, ordered by average daily volume:

If you prefer investing in or trading individual copper mining stocks, the basket of holdings in $COPX is a good place to start your research. Here are the top 10: 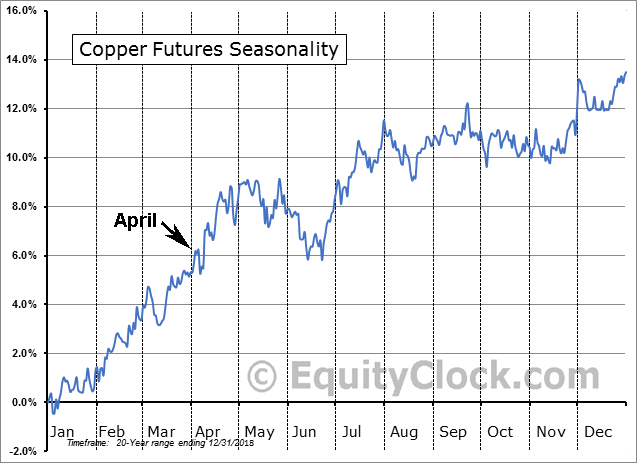 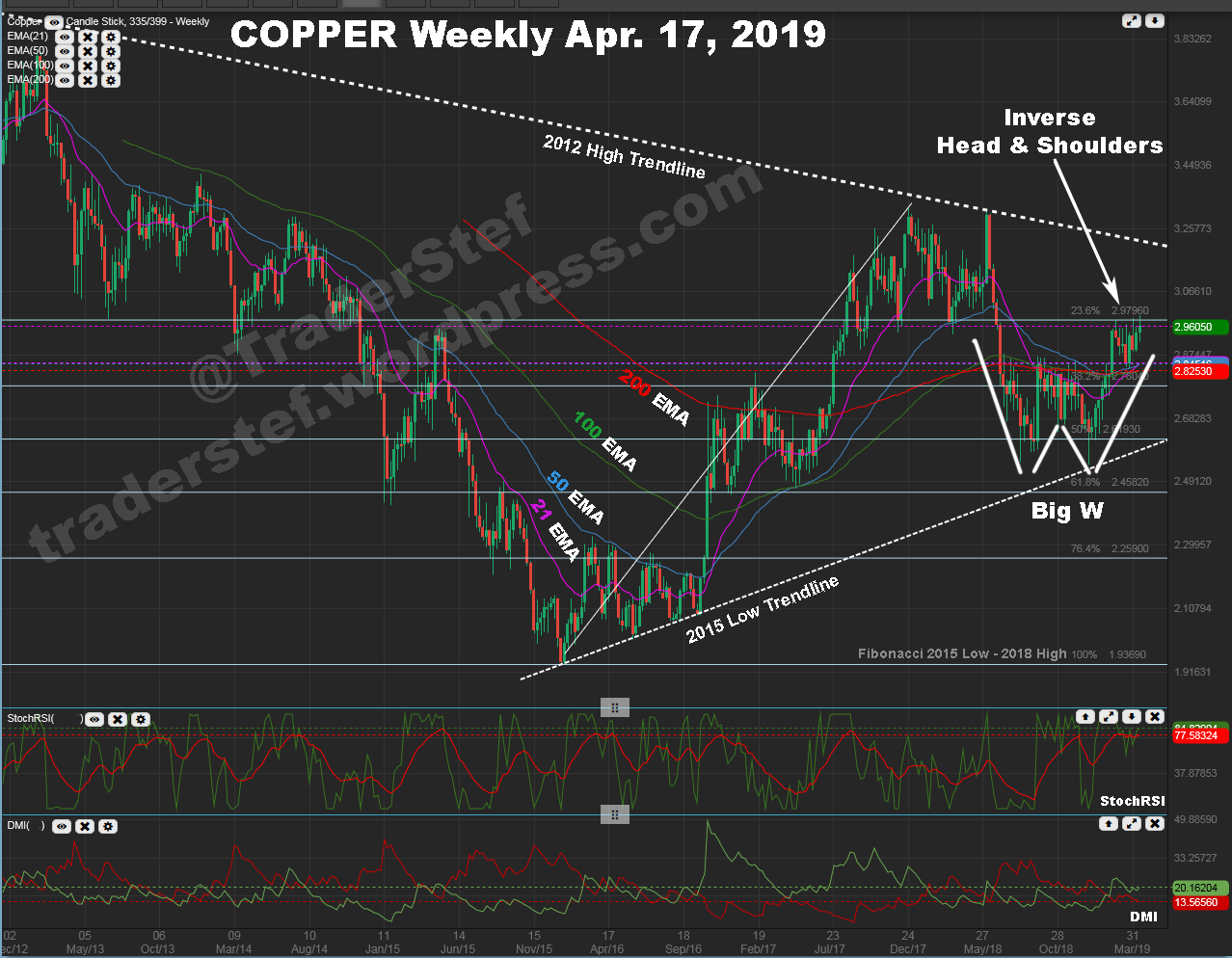 Following a significant rally since the 2015-2016 lows and a correction off the 2017-2018 highs that tapped the topside trendline drawn down from 2012, the price rallied during 1Q19. That rally completed the right side of a bullish Big W pattern, with a pivot off the lower trendline drawn back to the 2015-2016 lows. Take note of how the price action incurs resistance and support along the Fibonacci levels drawn between the 2015 low and 2017 high, how the Exponential Moving Averages (EMAs) have realigned under an Inverse Head & Shoulders pattern in 1Q19, and the StochRSI and DMI studies currently exhibit positive momentum. The daily chart below provides a close-up of the price action since the Apr. 2018 high. 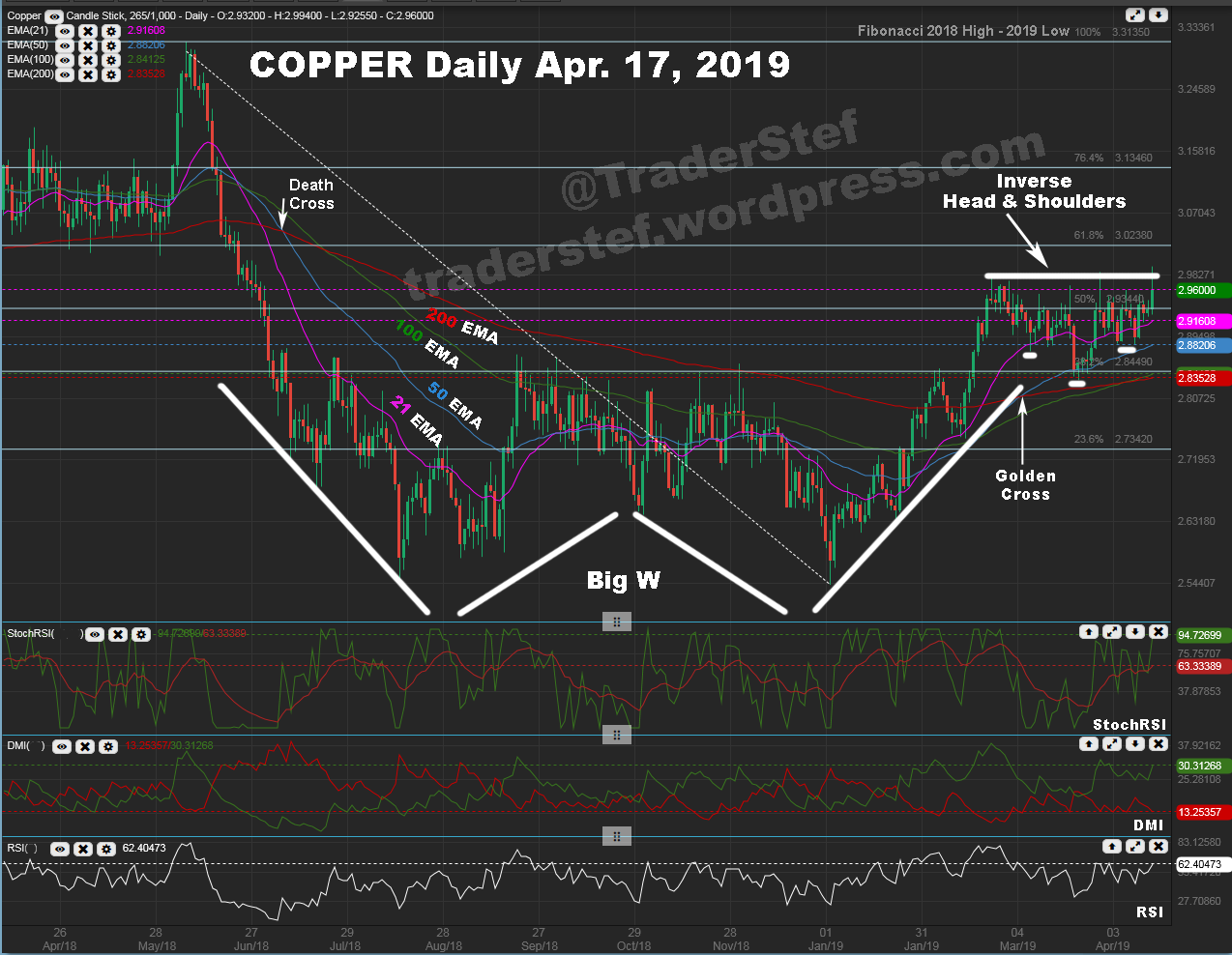 The Fibonacci lines on the daily chart drawn from the 2018 high and 2019 low indicate levels of lateral support and resistance. Take note of the bearish 50/200 EMA Death Cross in 2018 and subsequent Golden Cross in Mar. 2019 that followed the bullish Big W pattern and printed during the development of an Inverse Head & Shoulders continuation pattern. The EMAs have also realigned on the daily chart, along with downside price support occurring at the 50 EMA that increases the potential for the Inverse Head & Shoulders Neckline to be breached in the near-term with an upside surge in price. The StochRSI, DMI, and Relative Strength Index (RSI) studies are all positive and suggest that a rally in the price will develop in the near-term.

The following video about Rio Tinto’s Resolution Copper Mine in Arizona that is under development 1.3 miles underground demonstrates the difficulty and expense of bringing new production online for the global supply chain. 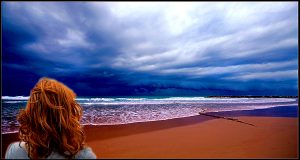