Quantitative Easing (QE) is money printing no matter how you slice and dice it. Most of our money (aka fiat currency) exists within an electronic medium today, with the exception of gold and silver in your hands. QE involves the Fed creating new money that is used to purchase U.S. Treasuries, bonds, and asset-backed securities as a mechanism to inject additional money into the banking system. Here is Jon Stewart on the Daily Show having some fun with the topic while referencing media clips of former Fed head Ben Bernanke. My apology for the reverse screen, but it is the only clip I could find with the specific skit.

The most important information I have for you today is eight minutes with Andy Gause from an interview this past Thursday. He discussed Quantitative Tightening (QT), QE, and the TaperCaper, as well as some thoughts on the current price action in the gold and silver paper market playpen. Do not waste your time going any further if you do not listen to it first.

To validate the information presented by Andy, here is the most recent Federal Reserve Statistical Release (aka H.4.1) of factors affecting reserve balances. Take special note of the year-over-year INCREASE of currency into circulation on the second table and the FRED graphs further below. 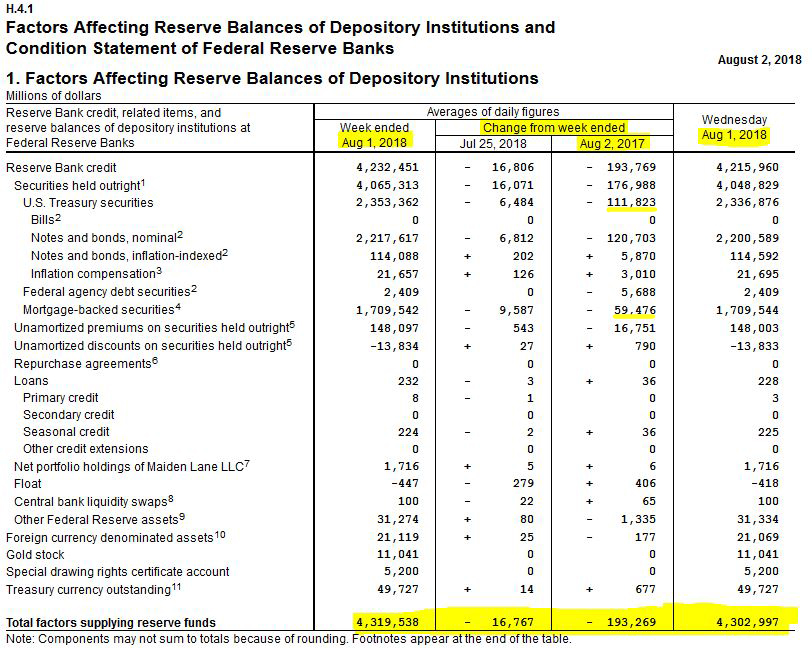 The second table shows that repurchase agreements (REPOS) also declined because the Fed did not temporarily sterilize the actions seen in the first table.

Here are the visual charts from FRED. If you are interested, here is the latest report on all “central bank balance sheets” from Yardeni Research, dated Aug. 3, 2018.

“Currency in circulation includes paper currency and coin held both by the public and in the vaults of depository institutions. The total includes Treasury estimates of coins outstanding and Treasury paper currency outstanding. This definition of currency in circulation differs from the currency component of the money stock, a measure of currency used in some other Federal Reserve reports (for example, the H.6 release), which excludes currency held in vaults of depository institutions.” – FRED Currency in Circulation (WCURCIR)

U.S. expects to borrow $329 billion in third quarter (3Q18), largest borrowing in that period in eight years… “The U.S. Treasury expects to borrow $329 billion in the July-September quarter, $56 billion more than previously estimated, according to a statement Monday. The new forecast includes an end-of-quarter cash balance of $350 billion. This is the largest borrowing in the third quarter since 2010 and is well above the $189 billion borrowed one year ago… One of the reasons for the increased borrowing is that the Fed is not replacing as many securities on its balance sheet once they mature, allowing some to ‘roll off’ under its new policy of quantitative tightening. Analysts at Jefferies estimated the government will end up borrowing over one trillion dollars this fiscal year, which ends Oct. 1.” – MarketWatch, Jul. 30

The Trump administration is headed for a gigantic debt headache… “Debt levels are piling up in the government, pushing borrowing costs higher. The Treasury Department announced Wednesday that it will be increasing the size of its auctions to help pay for burgeoning budget deficits. While the Trump administration has said that economic growth would make up for shortfalls from tax cuts and spending increases, the early results do not bear that out… The total U.S. debt just passed the $21.3 trillion mark, of which $15.6 trillion is owed by the public. The Treasury announced Wednesday that it will be adding $1 billion each to auctions of 2-, 3- and 5-year debt over the next three months, and $1 billion each for 7- and 10-year note and 30-year bond auctions in August. In addition, the department is issuing a new two-month note to help assure liquidity in the fixed income market. The changes will add $30 billion to the debt issuance for the quarter. On the overall, the Treasury said it expects to borrow $769 billion in the second half of the year, a projected 63 percent increase from 2017.” – CNBC, Aug. 3

Fiscal year 2019 begins in October 2018, with an estimated $985 billion deficit that will require additional debt issuance.

U.S. Federal Budget Breakdown – The Budget Components and Impact on the US Economy… “In Fiscal Year 2019, the federal budget will be $4.407 trillion. The U.S. government estimates it will receive $3.422 trillion in revenue. That creates a $985 billion deficit for October 1, 2018 through September 30, 2019. Spending is in three categories: Mandatory, which is at $2.739 trillion; Discretionary at $1.305 trillion; and Interest on the National Debt, $363 billion. This article provides a detailed breakdown of each. You can also find links to past budgets at the end.” – The Balance, Jul. 19

Economic advisers have suggested that we can grow our way out of the debt. Alan Greenspan says “good luck” with that and discusses the one real way to bring down debt and save the U.S. economy…