The crisis with oil and gasoline prices in the U.S. has gotten progressively worse since I penned Part 2 in Nov. 2021 (Twitter thread). The situation is spiraling out of control due to a confluence of policy decisions by the Biden administration and geopolitical events that include but are not limited to an implosion of U.S. energy independence due to regulatory edict as Biden and his cohorts lie to the American public about when the price of oil began to rise, runaway inflation at a 40-year high, the embarrassing military retreat out of Afghanistan, world leaders taking advantage of failed U.S. diplomacy on numerous fronts, an ongoing supply chain crisis (Twitter thread) that originated with a global pandemic from a synthetic-chimeric virus, the inflated costs associated with a growing shortage of fertilizer (Twitter thread) components that’s leading to a calamity in food insecurity, a bloody war in the Ukraine (Twitter thread) with no end in sight, and the West’s coordinated sanctions against Russia that are boomeranging across financial markets, commodities, energy, and borders in a global economy. Let’s refresh with an excerpt from Part 2:

“It was inevitable that the regressive policies, moratoriums on energy production and infrastructure, and executive orders the Biden administration implemented after taking the White House would bring inflation to the gas pump. The heydays of “A Return of the Black Gold Rush” with U.S. energy dominance from the Trump administration and “The Black Gold Oil War” in Mar. 2020 were clearly coming to an abrupt end. The price of oil and gasoline immediately began its ascent from $37 per barrel on election night of Nov. 2020, and rapidly returned to the $50-$60 zone that existed prior to the pandemic-panic and crashed world financial markets in Mar. 2020. I penned “The Inflationary Black Gold Rush at the Gas Pump Part 1” (Twitter thread) in Feb. 2021, and that analyses has proven to be prescient… The price per barrel for WTI Crude Oil reached a high of $85 last week, which amounts to a whopping 130% in one year. In my neck of the woods of New England, the price per gallon of 93-octane unleaded gasoline required for my car has spiked from roughly $2.40 per gallon to $3.85. In the small town of Gorda, California consumers were forking out $7.60 for regular and $8.50 for super in late October… A one-off sale from the Strategic Petroleum Reserve will not do much to reduce oil/gasoline prices for any significant period of time… A pandemic of the vaccinated is about to blow up on the world’s stage and reduce energy demand overall… Are we on the precipice of a deflationary depression? Only time will tell. And keep in mind that numerous geopolitical fires are also brewing on the planet with China vs. Taiwan and Russia vs. Ukraine & NATO, and would throw an unexpected monkey wrench into everyone’s analyses… Significant increases in the price of energy eventually lead to consumers footing the bill in everything you purchase. The worsening supply chain crisis in the transportation of goods across the world adds to the inflationary slap in the face when visiting your local gas station, grocery chain, and retail outlet for durable goods.” – TraderStef

In case you missed them recently, here are a few choice headlines to consider:

Petrodollar Cracks: Saudi Arabia Considers Accepting Yuan for Chinese Oil Sales… “One of the core staples of the past 40 years, and an anchor propping up the dollar’s reserve status, was a global financial system based on the petrodollar – this was a world in which oil producers would sell their product to the US (and the rest of the world) for dollars, which they would then recycle the proceeds in dollar-denominated assets and while investing in dollar-denominated markets, explicitly prop up the USD as the world reserve currency, and in the process backstop the standing of the US as the world’s undisputed financial superpower… The Saudis are angry over the U.S.’s lack of support for their intervention in the Yemen civil war, and over the Biden administration’s attempt to strike a deal with Iran over its nuclear program. Saudi officials have said they were shocked by the precipitous U.S. withdrawal from Afghanistan last year.” – Miami Standard, Mar. 15

Russia warns West: gas bills in rubles are just days away… “Putin said the West had declared economic war by freezing Russian assets, and so Russia saw no point in receiving dollars or euros for Russian exports anymore… Gazprom, the world’s biggest natural gas company, which supplies 40% of Europe’s gas, to accept export payments in rubles… ‘Ruble payments are somewhere between very difficult and not possible for the majority of European buyers to organize’… Payments in rubles would shore up the Russian currency, which has plummeted since the invasion on Feb. 24… Meanwhile Dutch gas prices, the European benchmark, have spiked due to concerns over whether countries will be willing or even able to pay in rubles… Russia says the West has defaulted on its obligations to Russia, and that Moscow’s post-Soviet delusions about the West, and the use of dollars and euros, are over.” – Reuters

No worries because one of the largest natural gas storage facilities in Europe is empty. 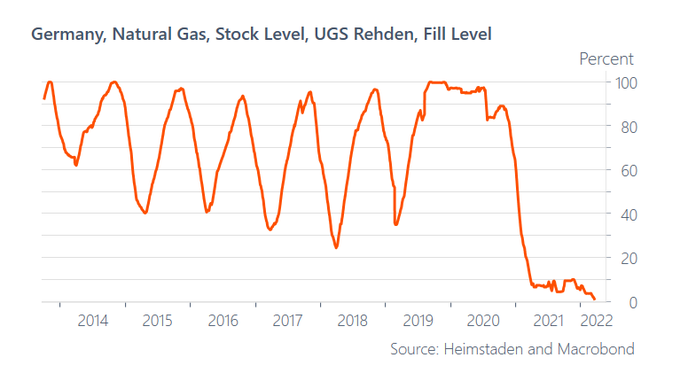 RUSSIAN NEGOTIATOR AT TALKS WITH UKRAINE SAYS RUSSIA WANTS COMPREHENSIVE DEAL WITH WHOLE RANGE OF POSITIONS, WITHOUT WHICH COMING TO AGREEMENT IS UNLIKELY – IFAX

“RUSSIAN MILITARY: IT IS A BIG MISTAKE THAT THE WEST SUPPLIES WEAPONS TO UKRAINE, THIS PROLONGS THE CONFLICT – NDTV

The good news to consider in the lack of energy independence department is that instead of kneeling to the whims of environmental, social, and regulatory governance, U.S. banking behemoths are hoping to finance domestic big oil and gas projects again. The Canadians are wasting no time in reminding our elected buffoons in D.C. that it can replace U.S. imports of oil if only that pipeline was restarted that Biden killed with a piece of paper and a pen.  Unfortunately, while visiting the local gas station, it becomes glaringly obvious that the inflammatory damage is already done, and it’s rippling through the supply chains of your grocery store or wherever you shop for anything under the sun. The increase in the price of gasoline is beginning to hurt consumer demand and threatens to stall the economy into recession sooner than later. But don’t tell the Fed as it tightens monetary policy and attempts to raise interest rates into a weakening economy. 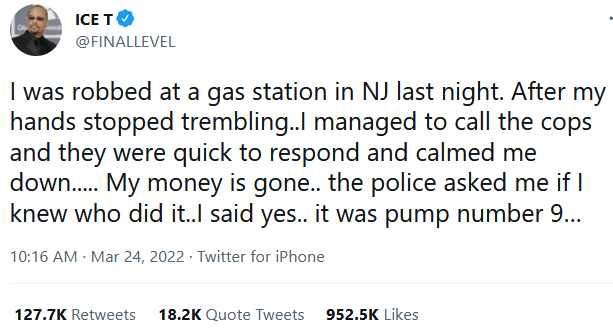 How do you think transportation companies and independent truckers like @JohnAndCasper are handling the enormous increase in the price of diesel fuel? 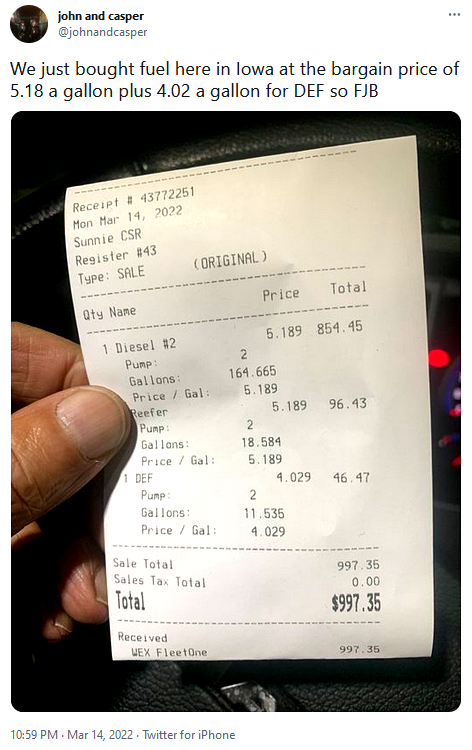 New York Sends Diesel to Fuel-Starved Europe in Rare Reversal… “U.S. fuel markets are getting even tighter as Europe’s scramble for alternatives to Russian diesel flipped New York from a typical import region to an exporter. In a rare reversal of normal trade flows, New York is sending two diesel cargoes to Europe — which relies on Russia for about a third of its diesel needs — even as regional inventories are at multiyear lows and prices hover close to record highs.” – Bloomberg, Mar. 22

What other measures is the Biden administration considering to relieve inflation pressure at the U.S. gas pump? They’re talking about releasing another 30 million barrels from the U.S. Strategic Petroleum Reserve (SPR chart). Releasing more oil from the SPR is a joke since it’s less than one day’s worth of worldwide production and only a couple of days of gasoline use in the U.S. Additionally, the White House and its cohorts on Capitol Hill are scheming to print more “stimulus” cash and sending it directly to taxpayers to help offset the cost of gasoline. Brilliant. Please forgive my jaded sarcasm, but how did similar measures workout the last time? Insanity is doing the same thing over and over and expecting a different result. In the meantime, Iran backed Houthi’s in Yemen are bombing Saudi Arabian oil facilities and that spiked the price of oil today. 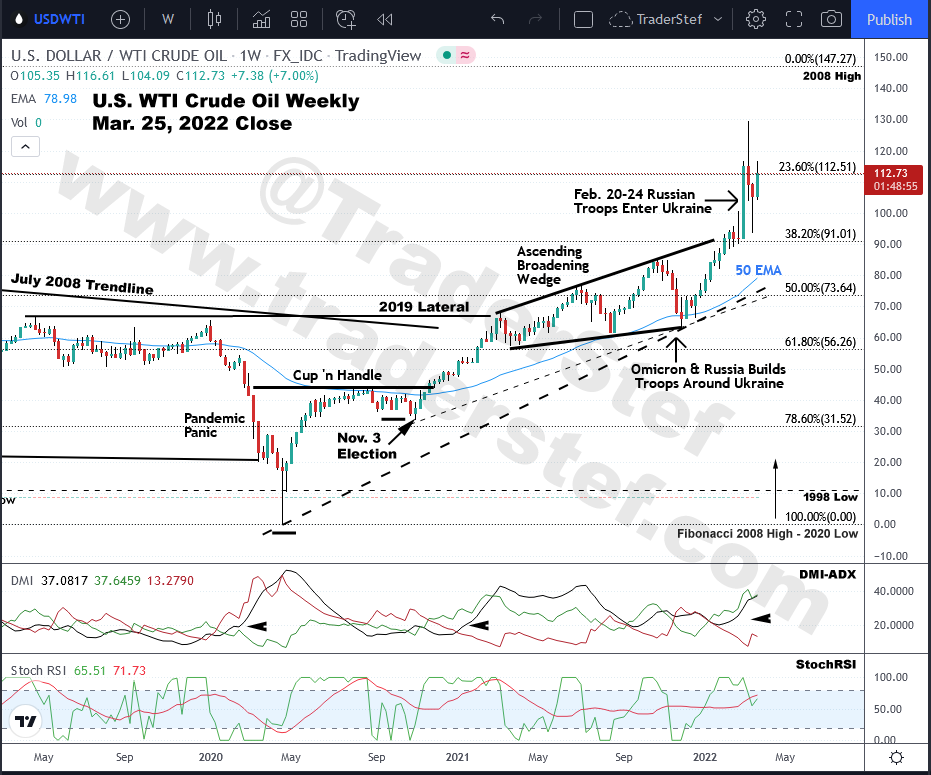 The chart looks bullish, but it’s taking a breather to consolidate before taking a shot at the 2008 all-time-high of $147 per barrel.

Roughest Neck Around – @CorbLund and the Hurtin’ Albertans