Iron ore is the second-largest commodity in the world next to oil, and its price has skyrocketed in 2019 on the back of supply disruptions and record steel production in China. A key factor affecting iron ore output in China is environmental oversight due to a growing air pollution issue. The crackdown has led to a high rate of mine closures within China. The remaining iron ore mines in China are mostly low-grade ore with 20 to 30% iron content.

Steel Production Record Reached In China, Helping Drive Iron Ore Closer To $100 A Ton… “A supply squeeze caused by mine closures in Brazil is not the only reason iron ore rose this week to a five-year high of $97.95 a ton. Demand is also a factor, with Chinese steel production running at a record annualized rate of more than one billion tonnes for the first time. The combination of Brazil’s problems and surprisingly strong Chinese steel production during a trade war with the U.S. could soon see the iron ore price move back above $100/t, and stay there for some time.” – Forbes, May 17

Here is the moment caught on camera when a tailings dam collapsed at a mining operation owned by Vale in the Brazilian state of Minas Gerais.

About 98% of the world’s iron is used for the production of steel. The majority of iron is part of minerals that include other elements. Iron oxide is the most common of those minerals, and rock formations that contain a high concentration of iron minerals exist near the surface of the Earth. Other minerals where iron is found include but are not limited to magnetite, hematite and limonite.

The iron content within an ore body can range from 20% to 70% and the yields are important in determining how profitable a mining operation will be. The majority of iron ore mining occurs on the surface of the Earth by open-pit mining. The following video demonstrates how ore bodies are broken apart in preparation for transport out of a pit. The long, white bags are emulsified ammonium nitrate. The red cap is TNT and the silver rod connected to it by the yellow wire is the blasting cap, which ignites the shot. The white pebbles poured into the blast holes by a powder truck are the main explosive, ammonium nitrate (ANFO), which is a mixture of fertilizer and diesel fuel. After a blast hole is filled with explosives, rock fines or “stemming” is packed in on top to keep the explosives under pressure. Let’s Blast

Miners load the crude ore into trucks and dump the material into pit crushers. The pit-crushing machines pulverize ore and separate the iron from impurities, such as sand and clay. The best grades of ore that contain near 70% iron require less processing. Lower-grade ores require further refining by agglomeration and beneficiation. Trains and cargo ships transport the refined ore to blasting furnace sites.

The US Geological Survey (USGS) collects statistics for both usable iron ore production and iron content. Some sources list China as the largest producer of iron ore based on crude iron ore production. Since most of China’s ore is of a low-grade and not usable, reliable sources dismiss it. 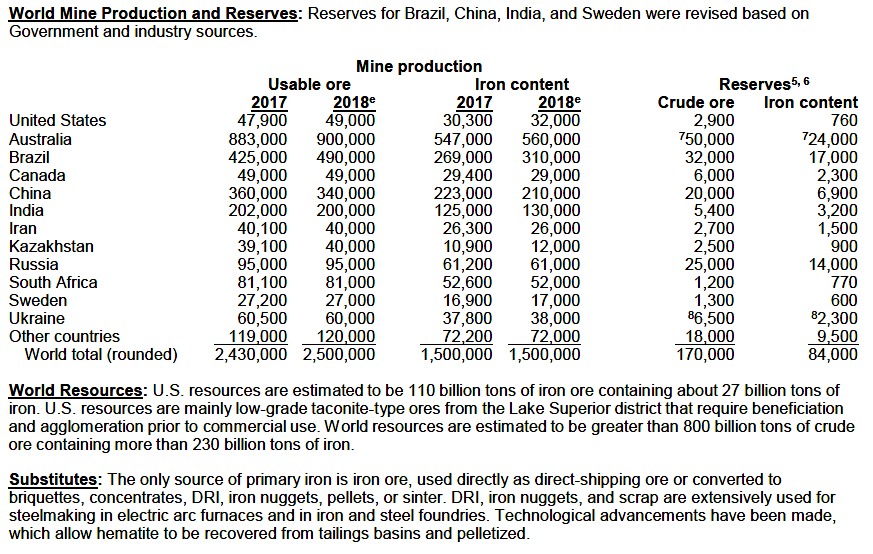 On to the technical analysis. To view a larger version of any chart, right-click on it and choose your “view image” option. 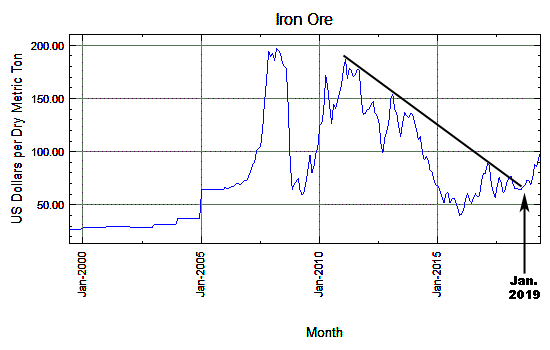 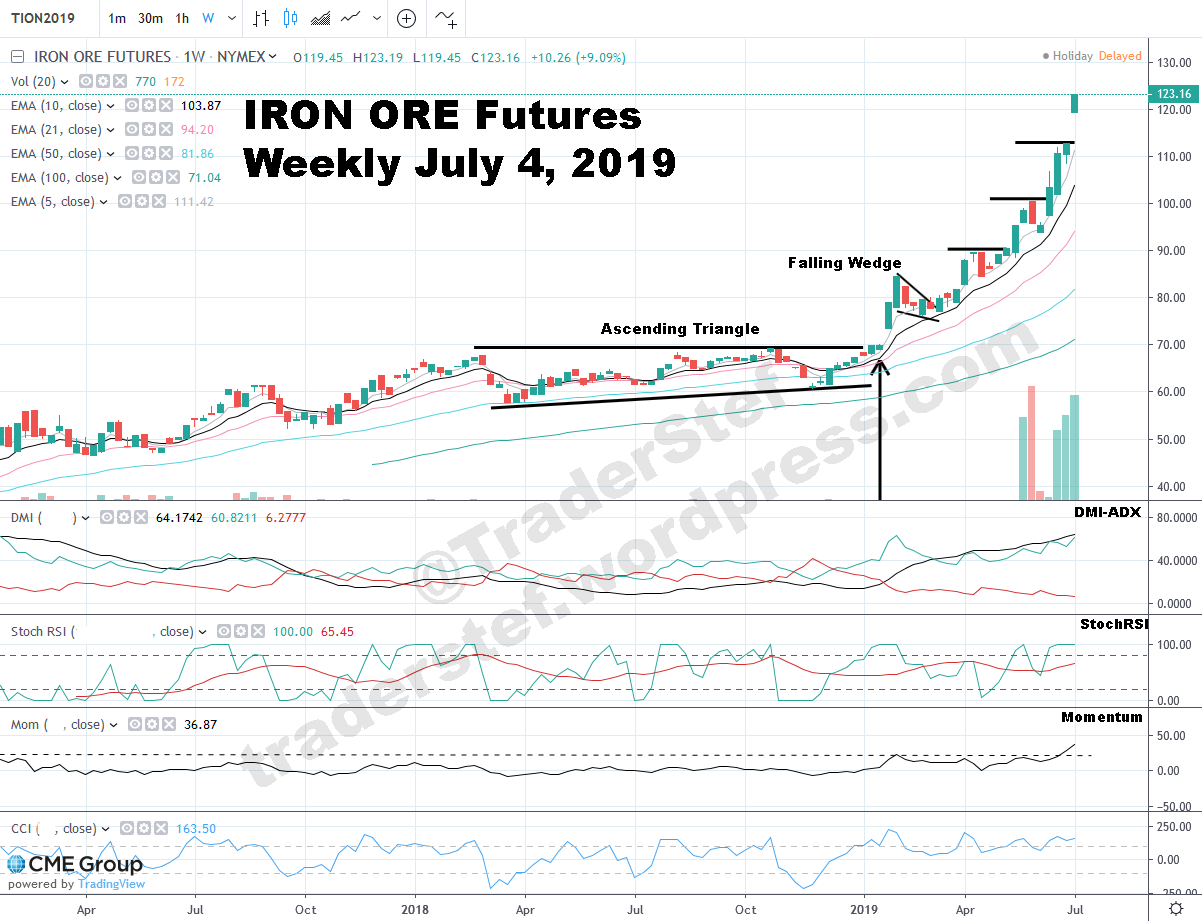 The price consolidated in 2018 within a bullish Ascending Triangle pattern. The topside trendline at $70 was breached with a gap up in price in Jan. 2019, which coincided with a bullish Alligator Tongue setup on the DMI-ADX. After tapping an $84.50 high in Feb., the price consolidated within a Falling Wedge and broke out into a stair-stepping pattern leading to its Jul. 3 high of $123.19 and close at $123.16. The DMI-ADX remains in a bullish stance, with the ADX at 64 and fast approaching overbought territory at 70 or above. The StochRSI is already in overbought territory but can remain there for an extended period while Momentum continues to rise. The Commodity Channel Index (CCI) remains elevated and the buy volumes have risen along with the price over the last three weeks. The chart is bullish overall and due for another period of consolidation in the near-term when all of the studies converge to an overbought reading. 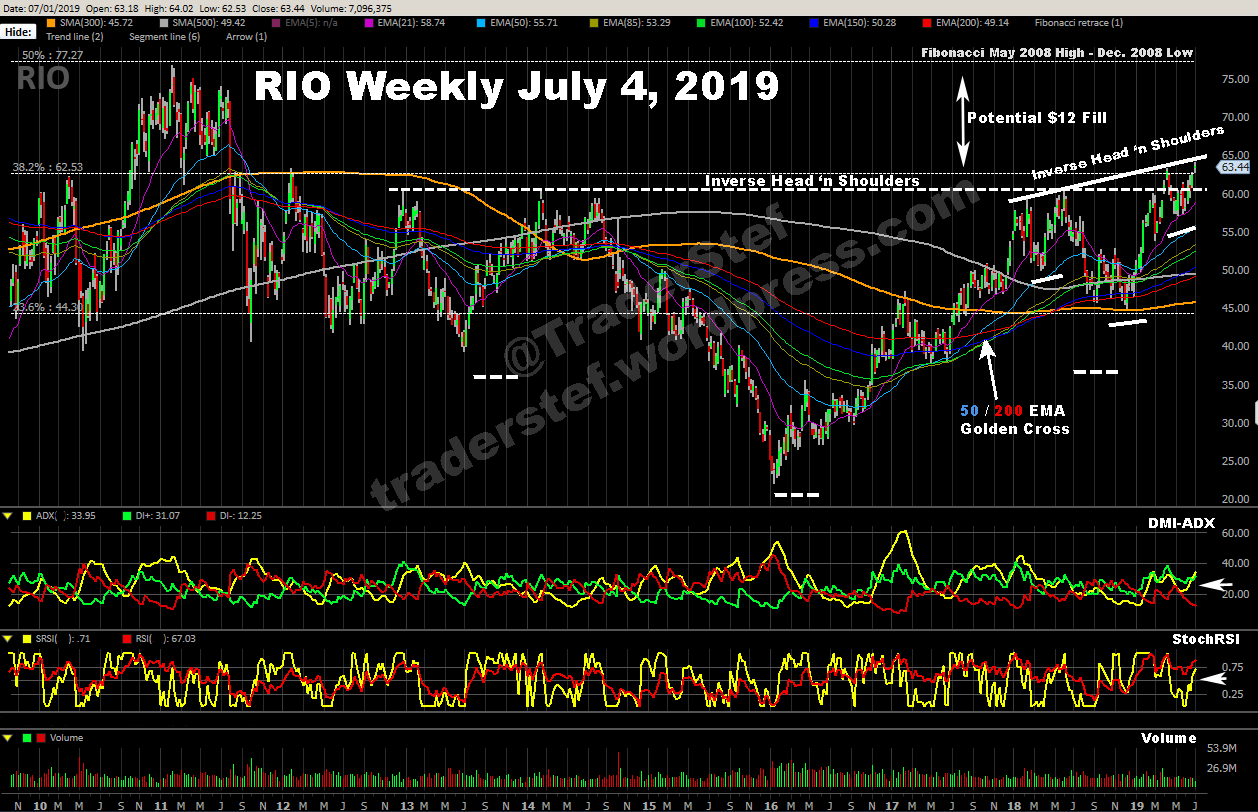 The price action on RIO this week breached a price level last seen in Feb. 2012 at the 38.2% Fibonacci level. This week’s high so far is $64.02, with a close on Jul. 3 at $63.44. Take note of the two Inverse Head ‘n Shoulders patterns. The Golden Cross that occurred during Oct. 2017 remains in play, all of the Exponential Moving Averages (EMA) realigned to a bullish stance, there is an Alligator Tongue taking shape on the DMI-ADX, and the StochRSI appears to be breaking out into positive momentum. The only downside on this chart is the lack of a rising volume pattern to match the rise in price. The price action must decisively breach the 38.2% Fibonacci and the Inverse Head ‘n Shoulders Neckline in order to traverse the $12 gap to the 50% Fibonacci level near the $76.77 high from Feb. 2011. The chart is bullish overall and only needs a strong buy volume push in order to fill that $12 gap. 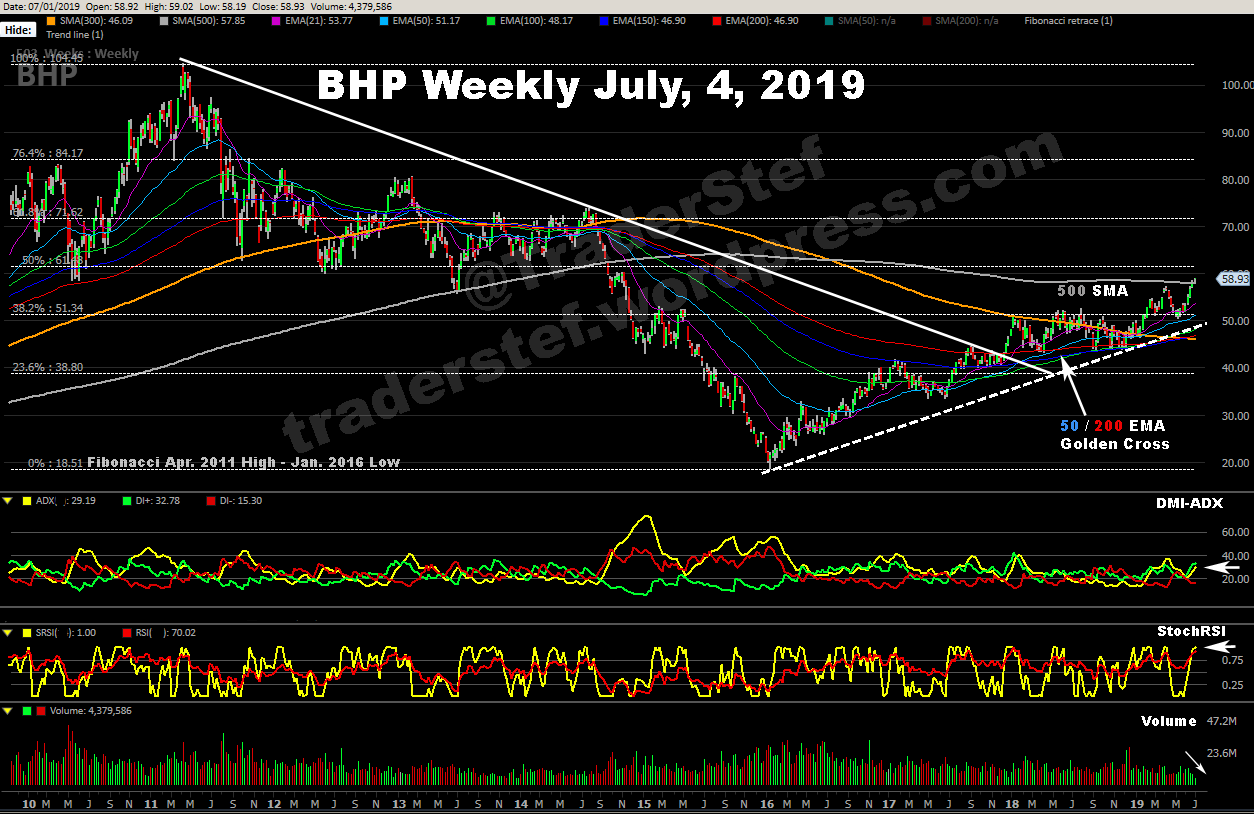 The price action on BHP has been in a steady uptrend since the Jan. 2016 low and closed at $58.93 on Jul. 3. The trendline drawn down from the 2011 high was taken out with conviction during Jan. 2018 and a Golden Cross occurred in Jun. 2018. The 38.2% Fibonacci level was a formidable resistance during 2018 and finally breached in Jan. 2019. The resistance battle since Apr. 2019 is the overhead 500 Simple Moving Average (SMA). The price action may be in the process of taking it out if a solid burst of buy volume gives it a push. The DMI-ADX is in Alligator Tongue mode and the StochRSI is vertical with momentum. The chart is bullish overall but needs a burst of buy volume to push the price up into the next Fibonacci levels and challenge the low $70s from 2014.