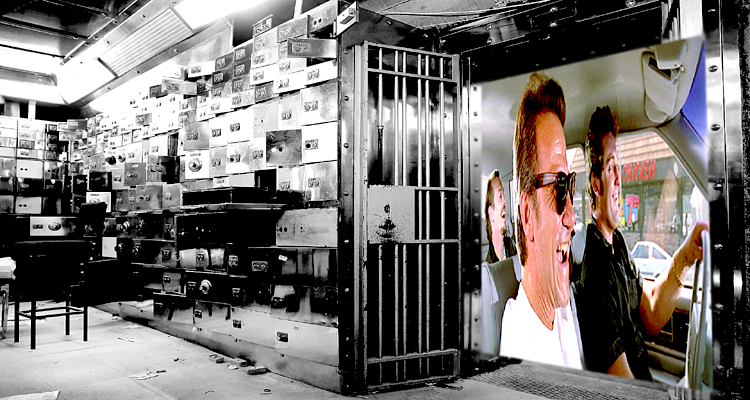 I penned “The (Un)safe Deposit Box Dilemma” in June 2018 to raise awareness about banking institutions that were imposing updated regulations on new and existing customer agreements. In early 2015, the first hint of storage prohibitions and liability clauses appeared in form letters delivered to Chase Banking customers, and subsequently from KeyBank in 2019. It is likely that similar changes have occurred across the banking and private storage industry since 2015.

“The contests in the safe deposit box are not insured by the FDIC or by Chase. Any disputes will be resolved by arbitration… We will not be liable for any damages or claims against us for the replacement of contents valued at more than $25,000… You agree not to store any cash or coins other than those found to have a collectible value.” – Chase Consumer Banking 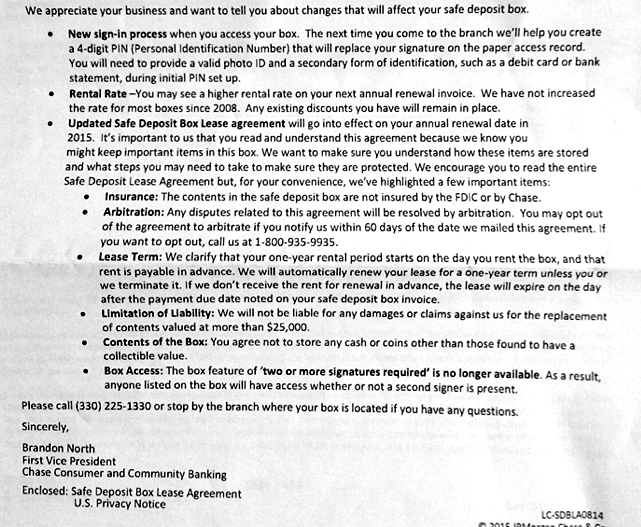 “The aggregate value of content per box and maximum liability for KeyBank has been set at $25,000. Also, remember that the contents of your Safe Deposit Box are not FDIC insured. You can no longer store gold bullion or non-collectable domestic or foreign currency for any reason… Key has the right to move boxes and/contents to a new location without any liability.” – KeyBank 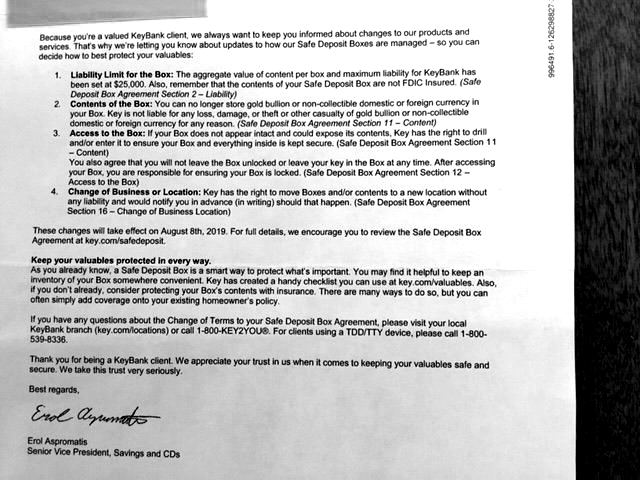 With the current progressive-radical atmosphere that dominates the White House, Capitol Hill, judicial activism, and government agencies that are displaying an abhorrent disregard for constitutional law, due process, and underlying facts vs. a mainstream media that supports “woke” policy implementation, the following events should embolden you to mitigate counterparty risk and safely store valuables near your home base. Remember that possession is nine-tenths of the law.

The first event is an open letter from Flag Officers 4 America that was originally posted on May 10, 2021, and is currently signed by more than 150 retired U.S. Generals and Admirals. They uniformly question the legitimacy of the 2020 election, the precarious state of “Sleepy Joe’s” mental and physical health, and warn that the United States is in “deep peril” under Biden’s divisive leadership. Here are a few excerpts:

“We are in a fight for our survival as a Constitutional Republic like no other time since our founding in 1776. The conflict is between supporters of Socialism and Marxism vs. supporters of Constitutional freedom and liberty… Without fair and honest elections that accurately reflect the ‘will of the people’ our Constitutional Republic is lost… Using racial terms to suppress proof of eligibility is itself a tyrannical intimidation tactic. Additionally, the ‘Rule of Law’ must be enforced in our election processes to ensure integrity. The FBI and Supreme Court must act swiftly when election irregularities are surfaced and not ignore them as was done in 2020…  the current Administration has launched a full-blown assault on our Constitutional rights in a dictatorial manner, bypassing the Congress, with more than 50 Executive Orders quickly signed, many reversing the previous Administration’s effective policies and regulations. Moreover, population control actions such as excessive lockdowns, school and business closures, and most alarming, censorship of written and verbal expression are all direct assaults on our fundamental Rights. We must support and hold accountable politicians who will act to counter Socialism, Marxism and Progressivism, support our Constitutional Republic, and insist on fiscally responsible governing while focusing on all Americans, especially the middle class, not special interest or extremist groups which are used to divide us into warring factions… Open borders jeopardize national security by increasing human trafficking, drug cartels, terrorists entry, health/CV19 dangers, and humanitarian crises… China is the greatest external threat to America. Establishing cooperative relations with the CCP emboldens them… Censoring speech and expression, distorting speech, spreading disinformation by government officials, private entities, and the media is a method to suppress the free flow of information, a tyrannical technique used in closed societies… Re-engaging in the flawed Iran Nuclear Deal would result in Iran acquiring nuclear weapons along with the means to deliver them… Stopping the Keystone Pipeline eliminates our recently established energy independence and causes us to be energy dependent on nations not friendly to us, while eliminating valuable jobs…Using the U.S. military as political pawns with thousands of troops deployed around the U.S. Capitol, patrolling fences against a non-existent threat, along with forcing politically correct policies like the divisive critical race theory into the military degrades readiness… The ‘Rule of Law’ is fundamental to our Republic and security. Anarchy as seen in certain cities cannot be tolerated… The mental and physical condition of the Commander in Chief cannot be ignored. He must be able to quickly make accurate national security decisions involving life and limb anywhere, day or night.”

The second event is when the FBI, DEA, and U.S. Postal Service raided hundreds of safe deposit boxes in March at U.S. Private Vaults (USPV) in Beverly Hills, California. The warrant specifically exempted more than 800 safe deposit boxes in the company’s vaults but allowed them to seize property belonging to USPV as part of a criminal investigation. A federal grand jury indicted USPV on counts of conspiracy to distribute drugs, launder money, and avoid mandatory deposit reporting requirements.

Legal Challenges After Feds Seize Safe Boxes In Beverly Hills… “Five customers at U.S. Private claim the FBI violated their constitutional rights by seizing their safe boxes as evidence. They found safe boxes containing fentanyl, OxyContin, guns, and stacks of gold bullion and up to $1 million in $100 bills, among many other illegal materials. In the process, investigators seized every stored safe deposit box as evidence. To reclaim property, owners must identify themselves and prove that they are the rightful owners, which undermines the ‘private’ in U.S. Private Vaults, which lets customers store materials anonymously. The business shut down in late March, according to the Los Angeles Times.” – Patch, Apr. 12

The victims of that constitutionally dubious act were supposed to be notified. Legal efforts to force the FBI to return seized property to the “honest” customers have been unsuccessful and the lawsuits noted above are pending in federal court. The seizure of safe deposit boxes held by USPV is a serious Fourth and Fifth Amendment issue since the Constitution does not abide by guilt by association and the authorities cannot seize first and ask questions later.

The FBI can’t seize first and ask questions later… “Hundreds of people across Southern California woke up to a nightmare: their private security-deposit boxes had been raided by federal law enforcement and learned their valuables were being held at an undisclosed location and that they would need to identify themselves to the FBI to reclaim their property…  Under basic principles of contract and property law, the same is true for U.S. Private Vaults.  When people rented those security boxes, they became their property, the place where they could store their most valued items.  The government had no more right to break into those boxes because they think U.S. Private Vaults’ owners are crooks than they have to break into peoples’ apartments.” – Orange County Register, Apr. 22

One USPV customer said she was never notified and not aware of the raid until she referred a friend to the company and discovered it was permanently closed. She had roughly $100,000 in gold and silver coins, inherited heirlooms, and an engagement ring she planned to give her daughter. She is still waiting for the return of her property.

According to Benjamin Gluck, a California attorney who is representing several plaintiffs, the FBI and federal prosecutors have “no authority to continue holding possessions of bystanders who are not alleged to have been involved… and the government, without any probable cause or suspicion, has taken away their property and announced that they won’t return it until my clients can prove they are the ‘legitimate owners.’”

The U.S. is not the only Western nation that is experiencing similar strong-arm tactics by their government that has become commonplace in an era of a global pandemic. I came across an incident in the U.K. from 2009 when more than 500 officers smashed their way into thousands of safe deposit boxes in search of criminal assets.

The raid that rocked the Met: Why gun and drugs op on 6,717 safety deposit boxes could cost taxpayer a fortune… “From the sheer manpower and weapons on display it looked like the capital was under another terrorist attack. But it had nothing to do with national security. Only hours before, teams from SCD6 (the Economic And Specialist Crime unit) and C019 (Specialist Firearms Command) hunkered down with technicians armed with angle grinders and drills. Also present were dog handlers, their animals trained to sniff out guns, drugs and explosives… However, lawyers were quick to warn that crashing into each and every box was tantamount to the police having obtained permission to smash down the doors of an entire housing estate. One of the largest criminal defense practices in London, says, ‘POCA was never intended for this. No one objects when criminals are caught and their assets seized – but shaking down everyone to get to them is specifically not what lawmakers wanted.’” – Mail Online, Oct. 2009

“The Naked Emperors’ Great Reset” is in the process of invading our privacy on an unprecedented scale and using the pandemic as an excuse to “never let a good crisis go to waste.” Don’t be careless with your most important personal property by inviting counterparty risk that you will regret with no recourse available. Governments overreaching and utilizing federal agents are “Reservoir Dogs” from the ‘90s. 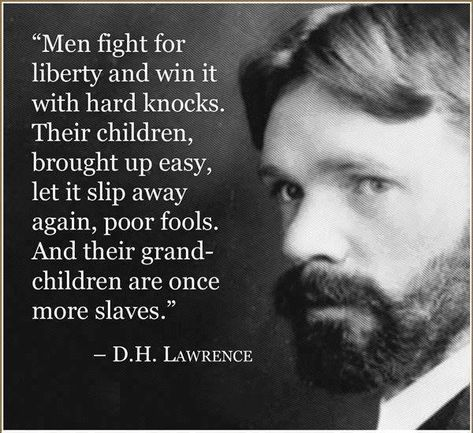 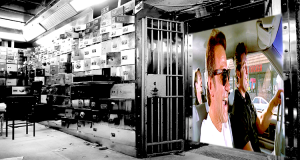