Threat of a Sovereign Debt Poker War is Triggered

There is a 50/50 chance we will have a government shutdown over the weekend and a 100% chance we cannot pay off our national debt, no matter what transpires in the foreseeable future.  In the meantime, our Romanesque politicians and mainstream media fake news refuse to adequately cover the U.S. sovereign debt and unfunded liabilities issue, which are driving our country into the biggest “shithole” you may ever experience. 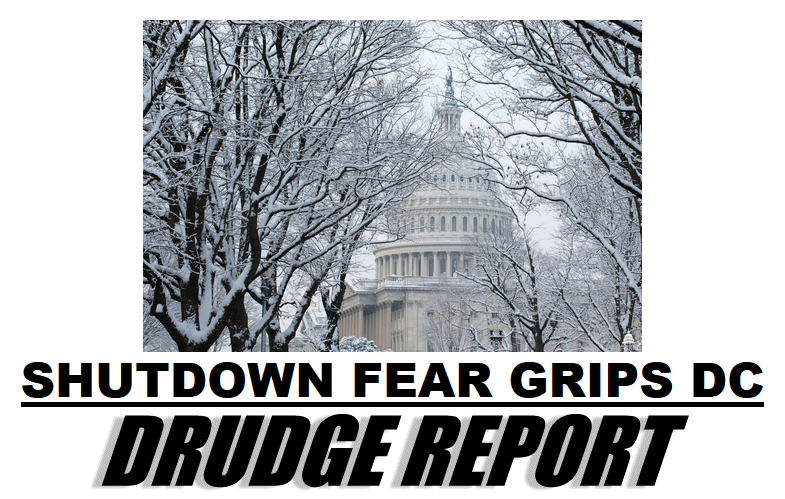 And it’s a global problem, folks, not just bad spending habits dreamed up by Uncle Sam all by his lonesome.  Global debt hit a record $233 trillion.  Is a debt jubilee possible?  Very unlikely.  Shooting wars are a nice distraction, though, rather than solving political issues that parade as money problems. 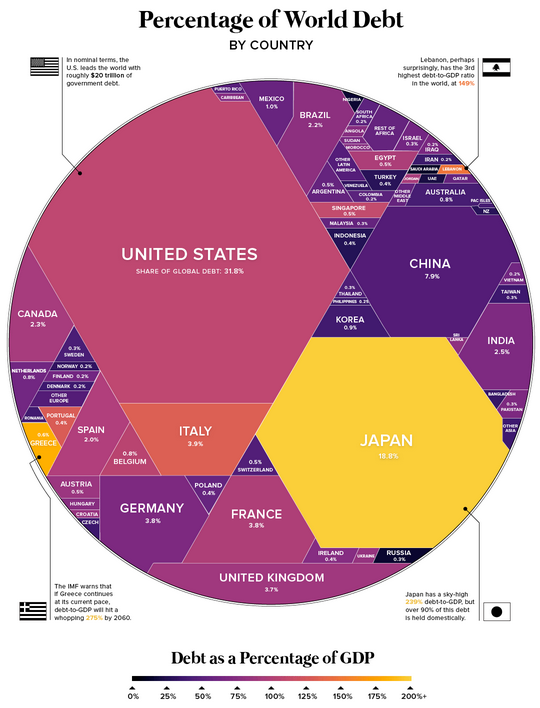 Scapegoats are easy, but solving a country’s problems is not.  The political class and shadow governments have enabled the current monetary mayhem since 1913.

Chinese credit agency has downgraded the United States’ credit rating from A- to BBB+… “Dagong Global Credit Rating Co., one of China’s largest firms, said in a statement Tuesday that it had given the U.S. sovereign ratings a negative outlook, specifically citing the GOP’s recently-passed tax-reform plan as a reason why.  Dagong also hits the U.S. for ‘political deficiencies,’ as well as the U.S.’ reliance on debt-driven economics, which it says are hindering further economic development.  The government did not discover from the financial crises that it is the debt-driven mode of economic development that has hindered the country from making ends meet… Deficiencies in the current U.S. political ecology make it difficult for the efficient administration of the federal government, so the national economic development derails from the right track… will lead to the federal government being forced to raise the debt ceiling with more frequency.” – The Hill, Jan. 16

Fitch reiterates U.S. downgrade warning… “Fitch reiterated its warning on Wednesday that the United States could lose its prized triple-A credit rating if the country’s debt ceiling is not raised in the coming months.  The U.S. Treasury Department will exhaust all of its borrowing options and run dry of cash to pay its bills by late March or early April if Congress does not raise its borrowing limit, the Congressional Budget Office has said. Fitch’s head of sovereign ratings James McCormack told Reuters that even if Washington then continued to make interest payments on its main government bonds, not meeting other domestic obligations ‘would not be compatible with ‘‘AAA’’ status.’ During the debt ceiling showdown in August 2011, Standard & Poor’s stripped the United States of its highest rating. It has since then kept a slightly less sterling grade of AA+ on the world’s largest economy.” – Reuters, Jan. 10

Moody’s Warns Washington – USA Credit Rating At Risk Over Trump Tax Cuts… “In an ironic twist, on the same day as Chinese officials, reviewing the nation’s foreign-exchange holdings have recommended slowing or halting purchases of U.S. Treasuries, Moody’s warns that US tax cuts are seen as a credit negative for the USA Sovereign rating.” – ZeroHedge, Jan. 10 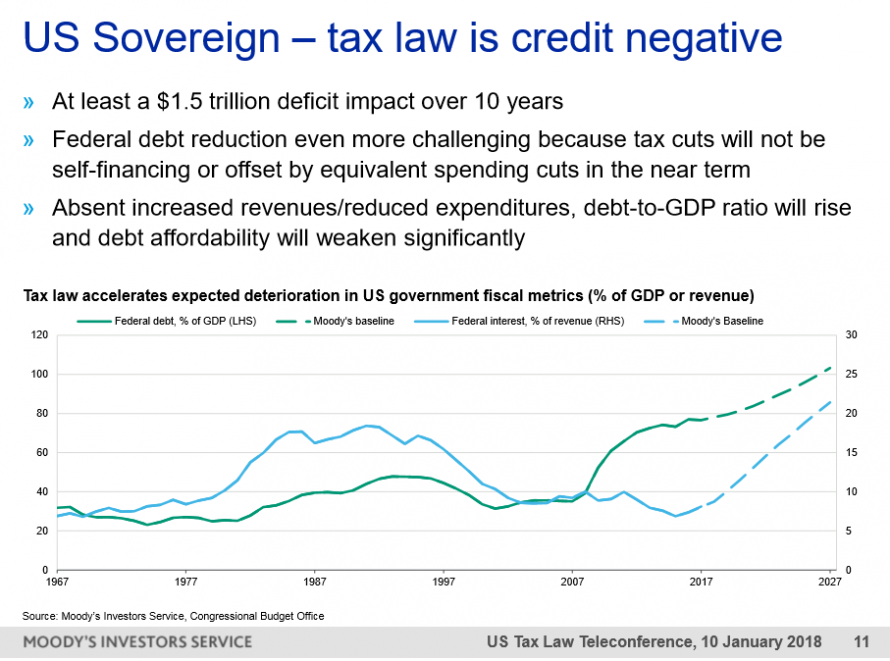 Graph of U.S. expenditures vs. revenue via the St. Louis Fed… 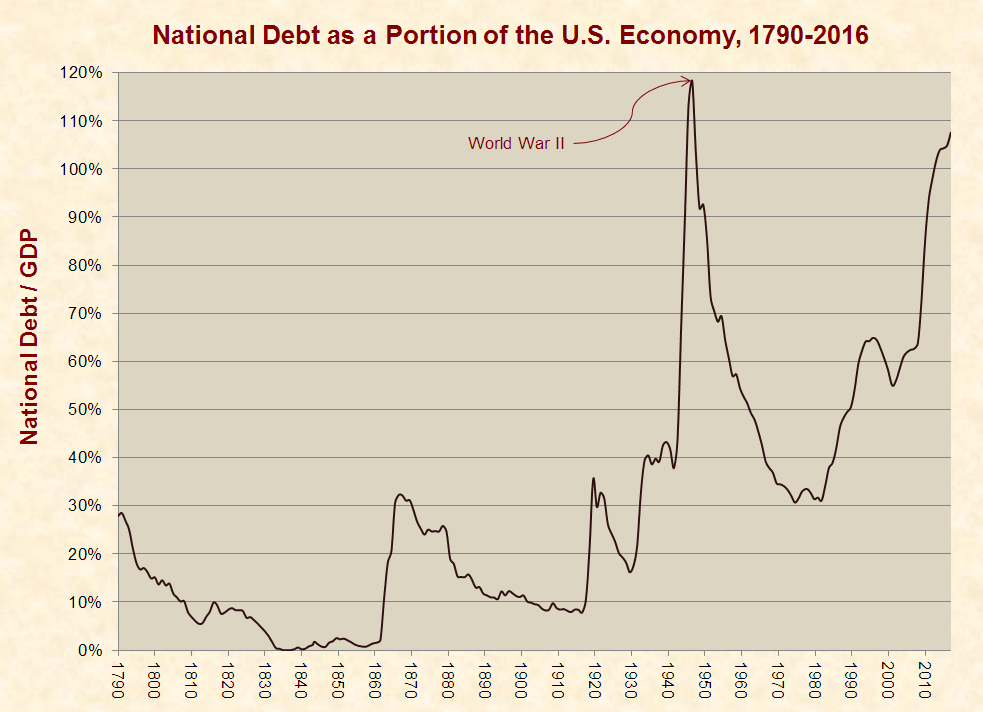 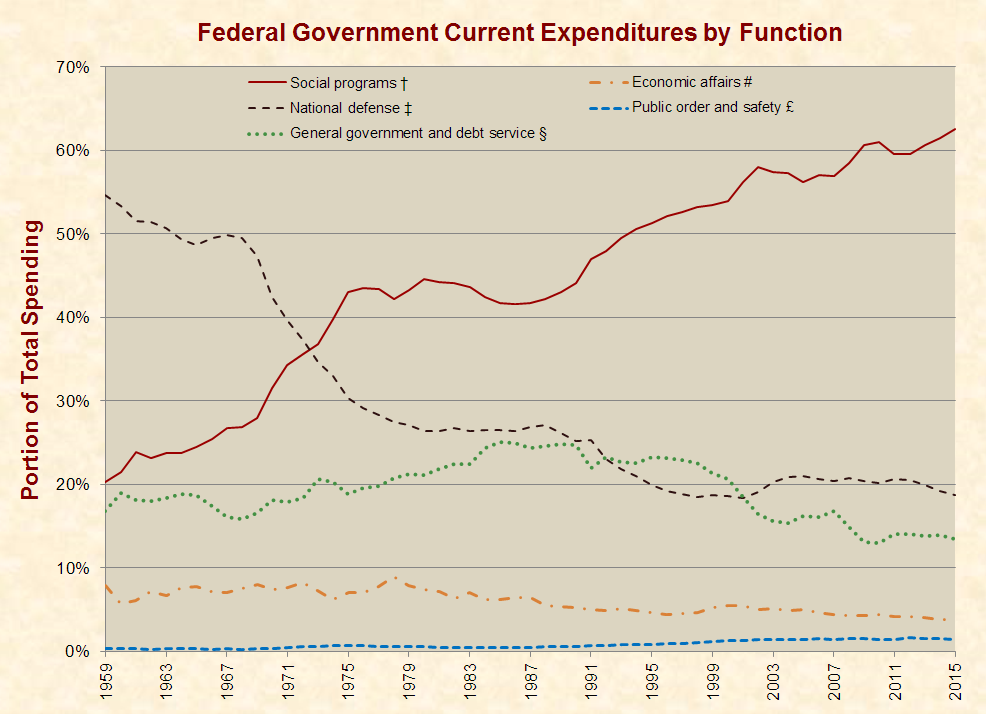 The figures above are determined in a manner that approximates how publicly-traded companies are required to calculate their liabilities and obligations. The obligations for Social Security and Medicare represent how much money must be immediately placed in interest-bearing investments to cover the projected shortfalls between dedicated revenues and expenditures for all current participants in these programs (both taxpayers and beneficiaries).

Combining the figures above with the national debt and subtracting the value of federal assets, the Federal Government had about $84.3 trillion ($84,306,000,000,000) in debts, liabilities, and unfunded obligations at the close of its 2016 fiscal year.

This $84.3 trillion shortfall is 93% of the combined net worth of all U.S. households and nonprofit organizations, including all assets in savings, real estate, corporate stocks, private businesses, and consumer durable goods, such as automobiles and furniture. This shortfall equates to:

Chinese credit agency puts US sovereign rating on par with Turkmenistan… “BRICS countries – Brazil, Russia, India, China and South Africa – have complained that US-based credit agencies such as Fitch, Moody’s and S&P Global are artificially downgrading the ratings of emerging economies and turn a blind eye on economic setback in the US and other Western countries.. ‘In the Western countries, they use the credit rating as a tool to protect their own profits, their own interests,’ Guan said, adding that the 2008 financial crisis was partly due to the wrong assessment of the US economy.” – RT, Jan. 16 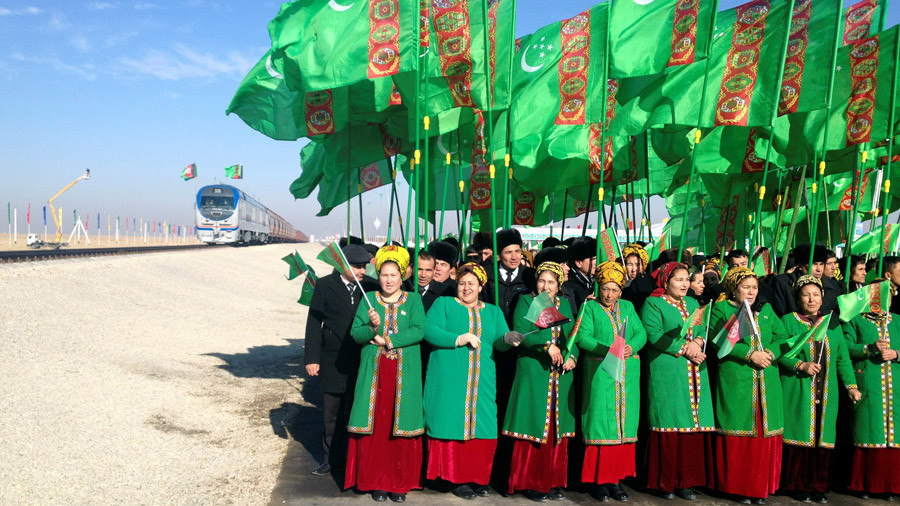 A TV ad to chew on, produced by Citizens Against Government Waste (CAGW) in 2010: United States Owes China. 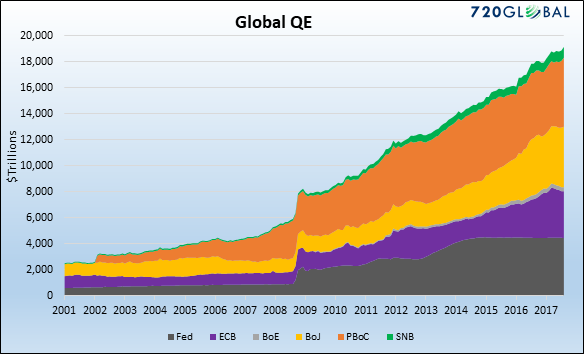 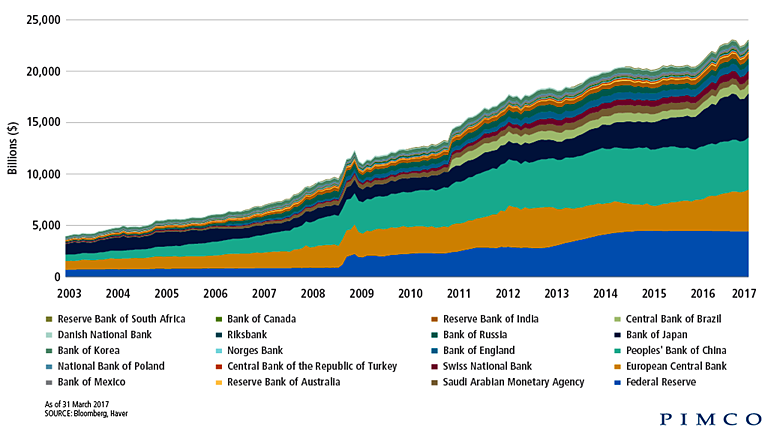 “Shithole-Gate” Might Lead To Government Shutdown As Democrats Balk At Deal… “The Democrats’ critics on the left are demanding that the minority party use all of its leverage to stymie the Trump agenda, even if that means forcing a government shutdown. Fortunately, more mainstream party members can now use Trump’s ‘Shithole’ comment as a pretext to drop their support for an immigration compromise in the hope of eventually coaxing Republicans into a better deal. Meanwhile, the GOP had concluded that it would be unable to reach a long-term spending accord by the Friday deadline, which means that chances of a government shutdown have increased this week as yet (update Jan. 18 another ‘stop-gap’ deal) is the only option. The government has been operating on short-term spending authorizations since the last two-year budget expired in September. The current short-term spending bill expires Friday at midnight.” – ZeroHedge, Jan. 16

Trump Fires Trade War Shots: “If There Is A Trade War With China, There Is”– Zerohedge, Jan. 17

McConnell plans for shutdown… “The Senate leader intends to keep his chamber in session and stage a series of votes designed to embarrass vulnerable Democrats.” – Politico, Jan. 18 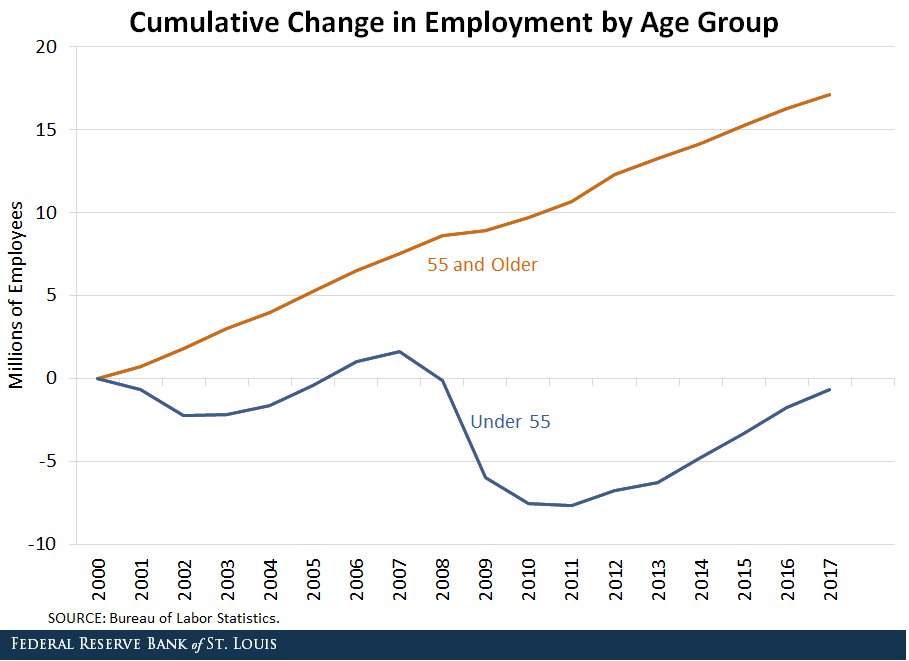 How is the economy really doing, so we can muster up enough cash to meet our obligations, despite the current QE-generated housing and stock market bubbles?  The velocity of money and real GDP remain in a crapper of a downtrend…

What all the infighting, drama, and name calling on Capitol Hill remind me of right now is a spoof of the famous “Mr. Pink” scene from the cult classic Reservoir Dogs.  Everyone is going to lose this argument, no matter your country, party, color, or lifestyle.

The bottom line to remember is that those holding the most gold after all the triggers are pulled will rule the emerging global monetary agenda. 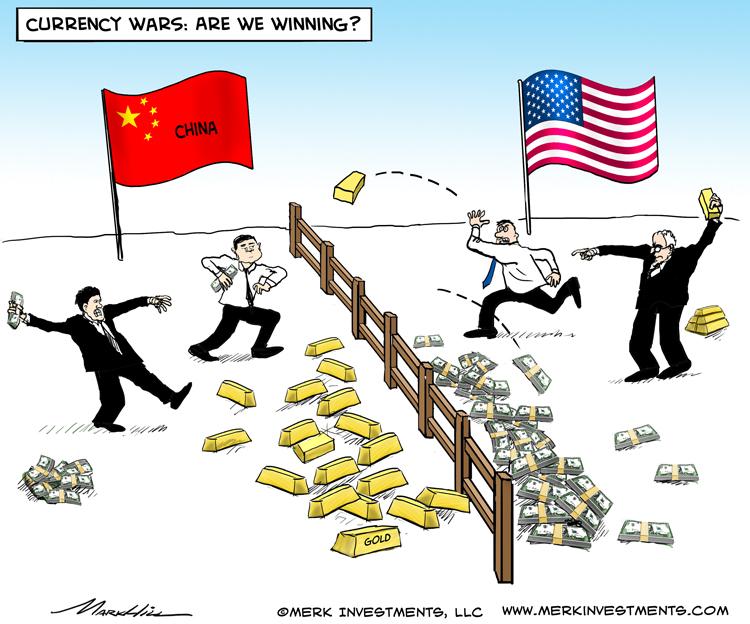