Back in the ‘60s and ‘70s, all holidays guaranteed a trip to both grandmas’ homes for authentic polish food, extended family, and silver dollar coins handed out to all the kids, which included me.  With the grandma that gave out silver coins, her immigrant parents died during the 1918 Flu Pandemic, which took 50 million souls worldwide, and then she survived the Great Depression era and married my grandpa.  I didn’t understand money back then, much less her history and how influential it was to her thinking going forward.  She understood what money was and wasn’t through real hardship and first-hand experience.  No wonder she socked away silver for decades in her basement, and a few times each year passed on a few coins to us kids.  As it’s said, if I only knew then what I know now, aka hindsight is always 20/20.  I should have never traded in some of the silver I had back in 1980 when the price of an ounce spiked to a measly $50, and I wish I could trade places now, or at least travel back in time and whisper in my own ear what the Fed was going to do in the future.

In the year 2017, we still hear and read stories that the Hunt brothers “cornered” the silver market.  In reality, there is no real evidence the Hunt brothers attempted any such feat.  During his career, Nelson Bunker Hunt made some very profitable investments in real estate, commodities, and silver.  He became quite wealthy, adding to his family’s oil fortune, and at the same time openly criticized the government and Federal Reserve monetary policies that were devaluing the dollar, especially after 1971 when the U.S. completely abandoned the gold standard.  What did happen to the Hunt brothers is “the cartel” changed the rules of the game in futures contracts, then used the Hunt brothers cornering the market myth as a scapegoat to cover their royal highnesses on Silver Thursday. 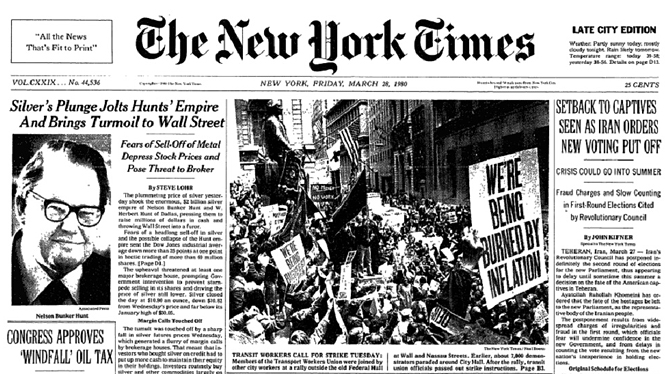 “Their behavior was not typical of cornerers. In the first place, they told everybody who would listen what they were doing; they were big, big buyers and intended to buy more and more. A cornerer operates in secret until he owns substantially the entire available supply, and then he squeezes the surprised innocents who have sold short and must buy in higher.  You would have to have been belligerently deaf and disbelieving and anything but innocent to sell short and then be caught surprised if Nelson Bunker and William Herbert had cornered silver and then demanded that you deliver. Everybody knew they were buying and willing to pay a higher price. In the second place, they never tried to squeeze anyone. They took their deliveries slowly, over many months, even accepted in settlement of some of their contracts non-certified silver not on deposit with the exchanges, and gracefully rolled the bulk of their futures forward into later and later months so as not to squeeze the sellers. Cornerers?” Alan Trustman, Atlantic Monthly, 1980 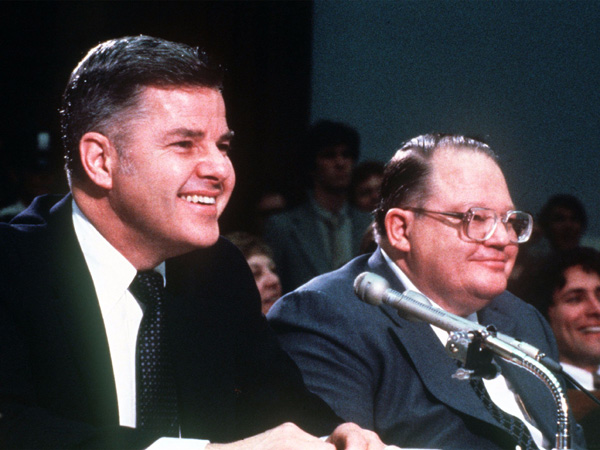 More often than not, speculators are short-term traders with no intention to buy or take delivery of positions in the long-term.  That is not what the Hunt brothers were doing.  They were making a realistic hedge against the printing presses and poor monetary policy over a long period of time, and also taking physical delivery. Their downfall was their involvement in paper contracts with leverage.  What is a good representation of “cornering the market” vs. the myth perpetrated upon the Hunt brothers?  During the final scene of “Trading Places,” Dan Aykroyd and Eddie Murphy corner the orange citrus market at the NY COMEX trading pit floor (RIP) against the Duke brothers, who were actually trying to corner the same with insider trading information.  Unbeknownst to the Dukes, they had the wrong info and lost big time. It’s similar to the movie “The Big Short,” but with a twist of orange by crooked institutional investors and within a very compressed time frame.