Have you noticed that the mainstream financial press is still relatively mute regarding the current U.S. sovereign debt default showdown compared to similar situations in the past? Janet Yellen at the Treasury Department has pleaded to Congress at least five times since early summer to raise or suspend the debt limit (a celling does not currently exist) before the X-date comes home to roost this fall.

Yellen Pleads to Obliterate a U.S. Debt Ceiling Mandate… “The U.S. national debt is closing in on $30 trillion this summer and clocking in at 127.5% of gross domestic product (Debt-to-GDP Ratio) as of 1Q21 as history and early indicators for the housing market point toward another deflationary cycle on the horizon. Any fantasies you may have about returning to an actionable debt limit, paying off our sovereign debt with mathematic machinations via fractional reserve banking, or revisiting a goldilocks economic situation are not based on reality.” – TraderStef, June 25

A Dangerous Confluence of Events is Emerging… “Debt Ceiling Fantasy: Since publishing ‘Yellen Pleads to Obliterate a U.S. Debt Ceiling Mandate’ on June 25, everything has changed and nothing has changed. To drive the level of indebtedness point home on July 13, Fitch Ratings affirmed its revised July 2020 U.S. credit rating as AAA: outlook negative. As would be expected, Yellen formally reminded Congress today with a final warning before the end of the month.” – TraderStef, July 23

Treasury Dept to invoke ‘extraordinary measures’ as Congress misses debt-ceiling deadline… “Extraordinary measures will allow Treasury to pay off the government’s bills without floating new debt for two to three months. After that, Congress will need to either raise or suspend the borrowing limit or risk the U.S. defaulting on its obligations… The Treasury Department notified Congress on Monday that it’s begun emergency measures. Janet Yellen explained to House Speaker Nancy Pelosi, D-Calif., that her department will halt regular payments to a variety of retirement funds… ‘I respectfully urge Congress to protect the full faith and credit of the United States by acting as soon as possible.’ Previously, Yellen impressed upon Pelosi that trillions in federal spending and Covid relief laws have made it more difficult to say how long Treasury will be able to sustain extraordinary measures.” – CNBC, Aug. 2

Janet Yellen warns US Treasury risks running out of cash in October… “Risk of a US sovereign debt crisis next month complicates Biden’s efforts to pass his multitrillion-dollar agenda through Congress. It also comes as the president grapples with the spread of the Delta coronavirus and fallout from the chaotic and deadly pullout from Afghanistan… Increasing the US debt limit used to be a routine affair… Stand-offs over the debt limit are sometimes dismissed as political theatre but top Biden administration officials view the stand-off with increasing seriousness. Yellen wrote in her letter to congressional leaders that even ‘waiting until the last minute’ could cause ‘serious harm to business and consumer confidence, raise short-term borrowing costs for taxpayers, and negatively impact the credit rating of the United States. At a time when American families, communities, and businesses are still suffering from the effects of the ongoing global pandemic, it would be particularly irresponsible to put the full faith and credit of the United States at risk.’” – FT, Sep. 8

Debt-limit standoff persists… “Another warning came Friday from the White House, which said state and local governments face severe cuts if lawmakers in Washington fail to lift the debt ceiling… Senate Minority Leader Mitch McConnell, the Kentucky Republican, this week repeated his view that Democratic lawmakers ought to go it alone… Analysts at Eurasia Group, a political risk consultancy, suggested the dangers for investors are significant. ‘Republican intransigence over increasing the debt limit and Democratic overconfidence that they will be able to pressure Republicans into doing so is creating unusually high risks of the U.S. crossing into a technical default on its debt sometime in late October,’ they wrote in a note on Thursday.” – MarketWatch, Sep. 18

The multitude of economic indicators and their minutia we’re dealing with are not populated by anything particularly positive to lean on. Examples include the abrupt loss of pandemic unemployment benefits this month that will have long-term effects on recipients and the overall economy, the eviction moratorium ending this month, the plebes increasingly being skeptical about an economic recovery, the stock market long in the tooth in our financialized economy with extraordinary levels of profitability in the American corporate sector that are 80% above the rest of the world, the supply chain crisis worsening, current housing prices as a multiple of family income are higher in the U.S. than they were in the great housing bubble of 2006 and 2007, consumer confidence/sentiment printed one of the largest drops on record and to levels not seen since 2011 as descriptions of Goldilocks stability are parroted across the financial media in recent weeks, and more job openings than there are people available to fill them begs the question of where all the people went and are still going.

One possibility is that the COVID inoculations doled out into billions of arms are killing more people than they save. That’s not an assumption, but rather a statistical anomaly pointed out during the FDA’s eight-hour meeting on booster jab efficacy. Here is a screenshot of the video excerpt that was removed from Twitter that shows Steve Kirsch’s presentation, and here is a link to the clip on Brighteon. 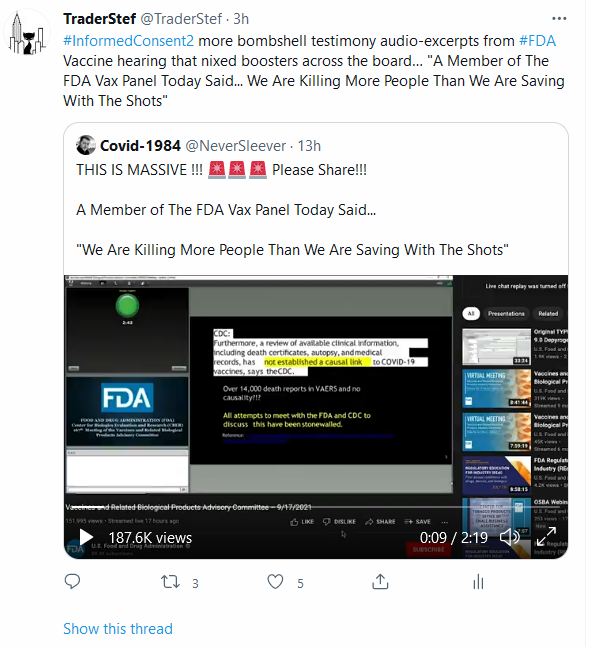 FDA Panel Votes Against Biden Booster Plan, Only Approves For Seniors And At-Risk Americans… “The agency’s Vaccines and Related Biological Products Advisory Committee voted overwhelmingly against approving the booster dose after a full day of presentations and testimony from researchers, doctors and government officials. Biden administration officials said last month that all Americans would be able to get a booster shot beginning the week of Sep. 20, even though the shot hadn’t yet been approved by the FDA.” – Daily Caller, Sep. 17

When all is said and done, a slowdown in the economy will be reflected in GDP numbers. A downward trajectory is beginning to rear its ugly head following the Fed’s quantitative easing (QE) pump into the pandemic economy. As of Sep. 15, the latest estimate from the Atlanta Fed’s GDPNow is printing 3.6% for 3Q21, which is close to 50% below its initial forecast. 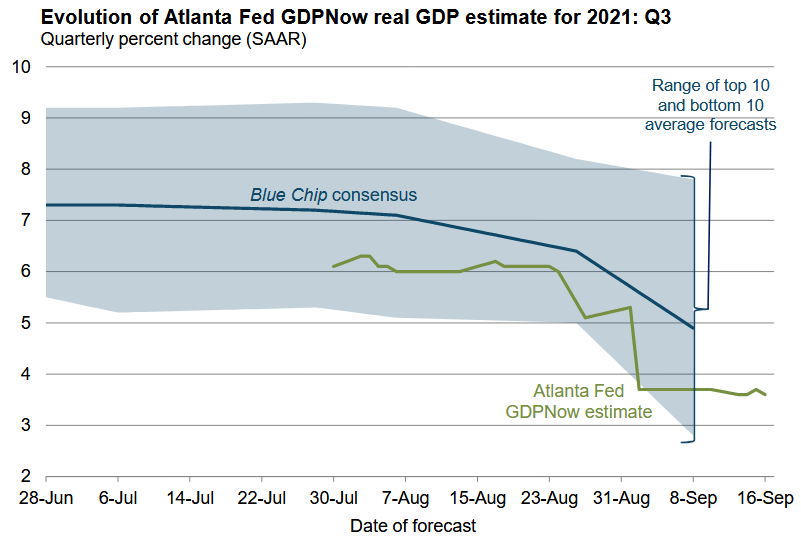 The whole debate on inflation was summed up in “The Inflation, Deflation, and Disinflation Rabbit Hole,” published on Apr. 30. The video presentation by Lacy Hunt at the bottom of that article is a must-listen.

These Dangers Loom Over the Fragile U.S. Economy in the Next 12 Months… “The U.S. and most of the world is at the threshold of what I would call a nexus point in history… I believe that the next year in particular is going to be adrenalized and chaotic beyond what we have already seen in 2020-2021. Like I said, there are two sides of America that are now at an impasse. Something is going to snap, and I suspect this will happen in 12 months or less.” – Birch Gold Group, Sep. 9

In the meantime, have you been working on your financial independence and retire early (FIRE) strategy so you can live from a position of fk you? John Goodman covers that sage advice with Mark Wahlberg. The horizon is darkening near-term and I recommend you have your home and financial house in order, be as debt-free as possible, and have a stash of precious metals in your hands as an insurance policy.

“Get a (modest) house with a 25-year roof, an indestructible Jap economy car, put the rest into the system to earn 3-5% to pay your taxes, and that’s your base, get me?”