Imagine if the U.S. Mint temporarily or permanently closed the doors of one of its remaining branches due to unexpected circumstances, rather than announcing a temporary sellout of gold or silver bullion coins. Quite a situation could unfold for the price of gold and silver if political upheaval prompted chaos in the streets, a natural disaster struck near a facility, or mining supply issues impacted the availability of raw bullion. After a fall in the price of gold in 2014 as the nation attempted to crawl out of the Great Financial Crisis while the Federal Reserve was running a full-throttle printing press with multiple versions of stimuli and quantitative easing (QE), the following occurred outside the Denver Mint due to limited availability of a JFK gold coin.

A worse scenario is not far-fetched if you consider a situation where a major earthquake strikes California that severely damages infrastructure, transportation hubs, or the San Francisco Mint facility. The U.S. Mint has operated numerous branches throughout the United States following the Declaration of Independence in July 1776 and opened or closed facilities due to logistics, supply, or political upheaval. For more detailed information about the history of each branch, click on the named facility. 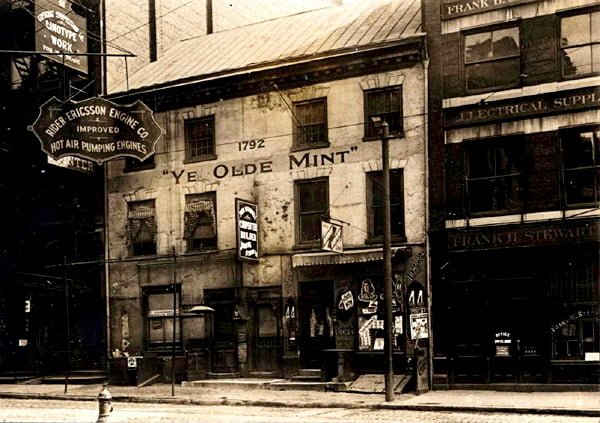 Late in the day on February 21, 2019, the U.S. Mint announced that inventories of 1-ounce American Silver Eagles are temporarily out of stock.

“Market fluctuations have resulted in a temporary sellout of 2018 and 2019 silver bullion. Production at the Mint’s West Point facility continues and when sales resume, silver bullion will be offered under allocation. The Mint is working closely with its suppliers in order to meet the demand of its authorized purchasers.”

The sale of silver bullion coins surged earlier in the day to 775,000, boosting the February total to 2,057,500, which followed the 4,017,500 sold in January. A start of over 6 million sold year-to-date is the fastest pace in 2 years. The increase in sales comes after a dismal 2018, with the lowest coin sales in 11 years. The U.S. Mint sells American Silver Eagles in bulk to “authorized purchasers” that include major coin dealers, brokerage companies, and other intermediaries. Purchasers pay a $2 premium per coin plus melt value and have a minimum order requirement of 25,000 ounces. Bullion coins in the secondary market are generally priced a few percentage points above the latest over-the-counter (OTC) spot market price of silver on FOREX.

There is confusion abound regarding the U.S. Mint’s responsibility in meeting consumer demand for bullion coins. In Title 31 of the U.S. Code, the U.S. Mint is required to supply “in quantities sufficient to meet public demand, one dollar silver bullion coins of specified size, weight, and design.” Former legislation also required that bullion be purchased from domestic sources to meet demand. On July 22, 2002, Public Law 107-201 changed the equation by “authorizing the Secretary of the Treasury to purchase silver on the open market when the silver stockpile is depleted, to be used to mint coins.”

The current shortage of silver bullion coin is likely due to the same reasons that the more recent sellouts occurred at the U.S. Mint. Those events were caused by a bargain price per ounce, a failure of the U.S. Mint to foresee a surge in demand for bullion coins, and a depletion of just-in-time inventory replenishment of blank planchets. This is in contrast to an actual supply issue originating from the mining side of the equation. The temporary shortage will cause an increase in demand for other silver bullion coins at competing sovereign mints and may create a domino effect increase in premiums near-term across the board. How long the current shortage lasts is anyone’s guess because the Mint indicated that purchases are to be strictly allocated, and from my recollection, the amounts in the past averaged one-million ounces per month.

For a quick view of the current spot price per ounce and premiums charged at popular retail dealers online, visit CompareSilverPrices. If you missed my buying guide, have a look at “Taxes and Risk – Gold and Silver Buying Guide for Savvy Metalheads.” As a reminder, never purchase coins with a promise to deliver many weeks or months into the future. Here is a chart of U.S. Mint silver coin sales in millions of ounces from 1987 to January 2019. 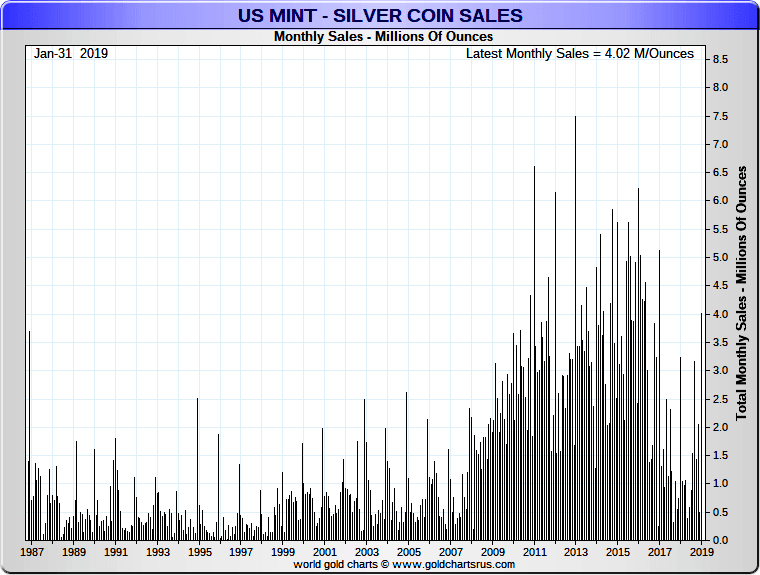 Here is a brief mini-documentary on the process of minting a silver coin from raw silver to final strike as presented by Endeavor Silver.

Here is a brief mini-documentary on the process of minting a gold coin from raw gold to final strike as presented by The Royal Canadian Mint. 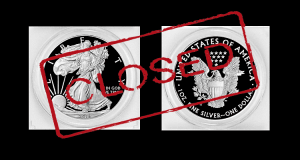