USD Volatility is not a MAGA Solution – Chart Update

A rising or falling USD affect different areas in the economy differently. The state of the economy determines whether it is a net negative or positive.

A rising dollar relative to currencies of trading partners makes imports cheaper for the U.S. consumer and our exports more expensive to foreign buyers.  That typically translates into a happier domestic consumer if they have the money to spend, but an unhappy manufacturer of products for export. It is likely a negative if the economy is full of slack, in low production, high unemployment, or recessionary.  Industries that compete with cheaper imports are hurt due to competition, but in a vigorous and fully employed economy, the effect may not be so painful.  If you suffer a negative impact on employment because the industry you work in is export related, that does not translate into happiness and spending.  If the economy is strong with full employment, a rising dollar can be a headwind by reducing export demand, but the overall benefit to consumers might offset negative influences. Overall, a rising dollar helps the domestic population by improving terms of trade with the rest of the world, and may offset any negative effects when the economy is vibrant.  If the dollar is falling, jobs in manufacturing and export related industries usually benefit, but higher domestic prices reduce the benefits to a consumer.

If we go deeper into economic indicators (which are not great despite the MSM and administration spin) and monetary policy (raising rates into weakness) vs. whatever the dollar is doing in reaction to financial headlines and currency wars, it becomes extremely complicated to dissesct or forecast, and will eventually require a history book to shed light on the current situation in hindsight.  By the way, the Fed is confused too. The Fed stated on numerous occasions that it does not understand what is going on with inflation, unemployment or wages, so how can the peasants figure it out.  Maybe that is why a press conference is on the agenda after every FOMC beginning in Jan. 2019.

Here is an idea.  Consumer spending represents roughly 70% of the Gross Domestic Product (GDP).  Therefore, in order to truly MAGA, the country must return to a level of self-sufficiency without dependency upon imported materials and products, and implement fair trade policies for those luxury items we refuse to give up.  We must wear a pair of blinders to ignore global monetary issues by returning to a gold and silver standard, restructure our sovereign debt, limit the encroachment of globalist policy, build-out an improved transportation and energy infrastructure, secure a domestic supply chain for all commodities, rebuild the domestic manufacturing base across all industries, secure the borders, and ensure the military is provided all materials from domestic resources.

Does all that sound familiar?  It used to be like that. That is what MAGA is.  It is possible to return there while keeping a more liberal mindset than existed in the social conscience after WW2.  It will require a level of sacrifice and geopolitical risk the millennial generation may not have the stomach or attention span to deal with. Turning this ship around will be slow and stormy.  Buckle up.

The plunge in the EUR along with trading war headlines contributed to the dollar rally last week, which in turn whacked gold down to its current price level around $1,270.  Here are some thoughts on the EUR from FXEmpire.  Is the EUR forming a base?

Also, consider this info from CountingPips… Speculators upped their USD bearish bets for a 2nd week. 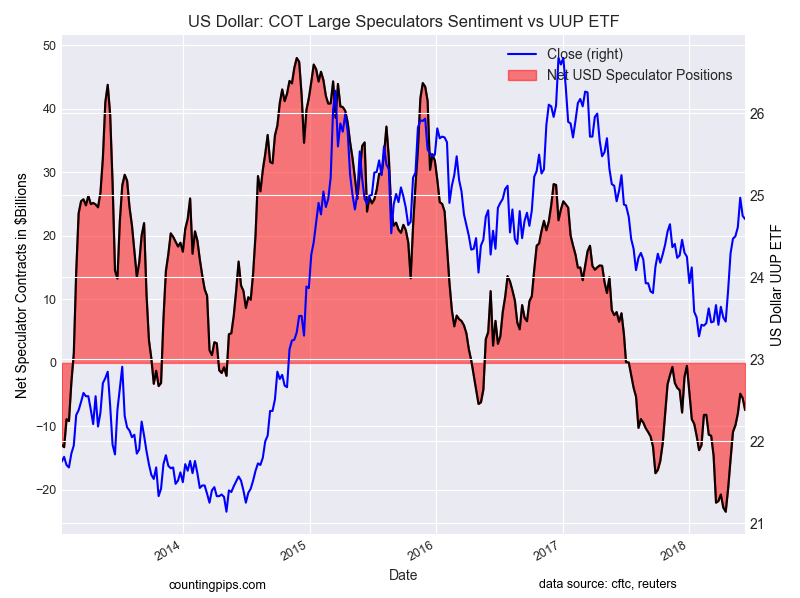 On to the USD charts. To view a larger version of any chart, right-click on it and choose your “view image” option.  You can find my previous analysis from Apr. 27 at The USD – Having a Dead Cat Bounce, or is it a Breakout?  I’ll include an excerpt with each of today’s charts.

Monthly Chart Apr. 27 – “Beginning in Feb. 2018, the lateral drawn from the 2008-2010 highs met the 61.8% Fibonacci (2014 low – 2017 high) at $88.42 and formed a confluence of support.  The 21, 150, and 100 Exponential Moving Averages EMAs are also contributing to the support on this monthly.  A potential Dead Cat Bounce is brewing.  A decisive breach of the overhead 50 EMA would kill the cat and likely lead to further upside price action, breaking the current bearish downtrend.” 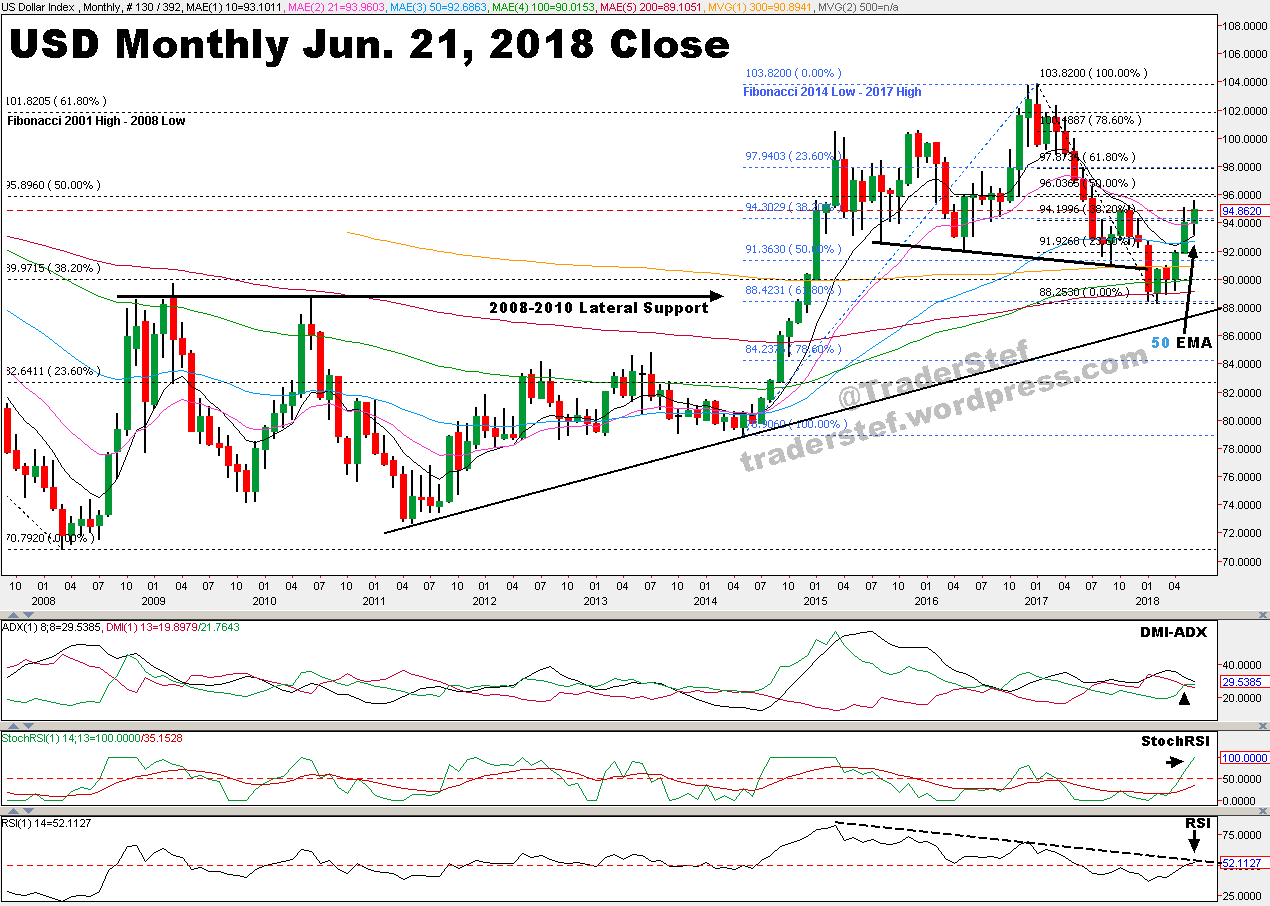 Is the Dead Cat Bounce dead or alive?  Pros: As noted in my analysis from late April, a breach above the 50 EMA did occur in May, and continued with strength last week due to the EUR plunge and trading war headlines with China.  Price is now trading above all the moving averages.  StochRSI has risen as high as it can go and could hang out up there for a while. Cons: Price has reached into a confluence zone of four separate Fibonacci levels with significant resistance between $94 and $96.  The high so far this week is $95.52.  RSI has not yet breached above the trendline drawn down from early 2015.  DMI-ADX is indecisive.

Weekly Chart Apr. 27 – “When drawing the downtrend line off the 2017 high, it is easy to miss that there are actually two.  The first was breached decisively by last week’s candlestick.  The second is sitting slightly above the Death Cross.  Stiff resistance remains before anyone can know for sure that the USD has broken away from its bearish downtrend.  The DMI-ADX lines are kissing here, without a definitive cross to the positive.  The StochRSI is stoked and floating topside, which indicates overbought territory. The RSI is reaching the 50 level and needs to be left in the dust for any bull move to take hold. Despite the recent rally, I remain Bearish but Neutral near-term until the 50 EMA on the monthly is breached decisively to the upside and the Death Cross and secondary downtrend line on the weekly are taken out with strong upside candlesticks.” 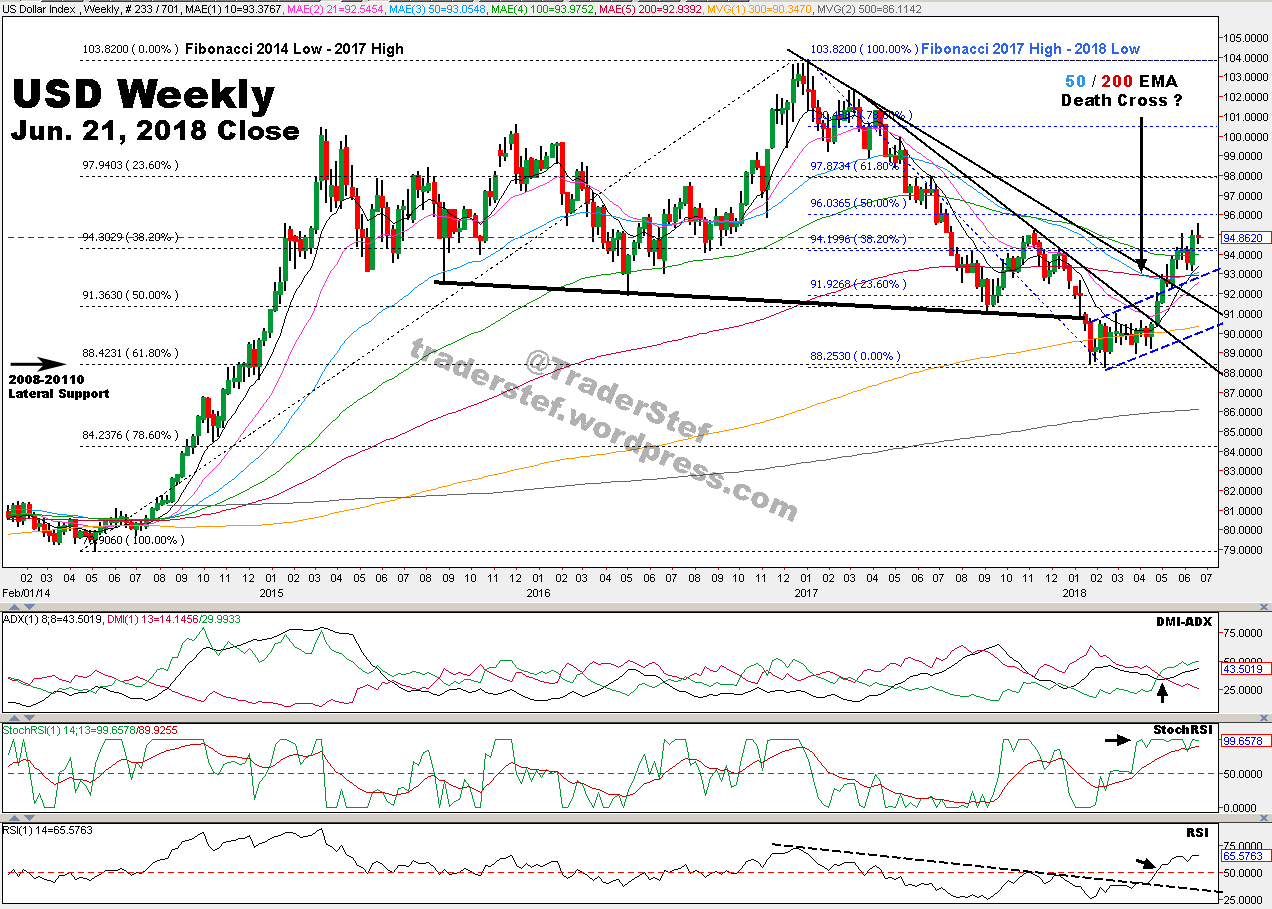 Pros: Both trendlines drawn down from the 2017 highs were decisively breached to the upside. DMI-ADX looks positive with a bullish Alligator Tongue pattern taking hold.  RSI has left the trendline drawn down from 2017 in the dust, albeit with hesitation over the last few weeks.  Cons: StochRSI remains stoked topside and cannot sustain the overbought condition much longer without a breather.  The Death Cross has the potential to remain in play despite the recent rally, and price action over the next few weeks will ultimately determine its outcome.

Due to underlying issues with economic data, which are not friendly to the goals POTUS is attempting to accomplish, I cannot turn overly bullish despite the recent rally.  The trend may be your friend, but the underlying fundamentals are screaming Neutral near-term and Bearish long-term.