When dissecting post-Fed speak, one of my favorite data points to bring up is Velocity of Money (VoM).  It’s defined by the number of times one dollar is spent to buy goods and services per unit of time.  There are three ways left to measure VoM: M1, M2, M3 (discontinued in 2005), and MZM (money with zero maturity), which is the broadest component.  MZM includes the supply of financial assets, notes, and coins in circulation, traveler’s checks, demand deposits, other checkable deposits, savings deposits, and all money market funds.  As you can see on the FRED graph below, VoM has declined since 1981.

When that happens during expansionary monetary policy, such as Quantitative Easing (QE), which is essentially “money printing,” (well, not literally, according to Bernanke)…

…it can offset the increase in money supply and lead to deflation, instead of inflation, while a bloated socialist-leaning government takes over a larger portion of the economy’s GDP.  According to the Fed, VoM is declining because consumers and businesses are stuffing cash under their mattresses or into banks’ digital ledgers.  But in a QE kind of world, why would they hoard cash instead of spending it?  When you print trillions, you’d think we’d be flush with cash, and credit card offers flowing over in your mailbox would have lasted forever.  Maybe hoarding and less spending is occurring because they’re hindered by large debt burdens or leveraged up to their eyeballs, QE digits given to banks are sitting on deposit at the Fed as bank reserves and are accruing interest and flipping bonds instead of being lent out to main street, 6 in 10 American consumers don’t have $500 in savings for an emergency, and all this while real wages are declining.  That’s the short list.

There is one new variable on the block that’s definitely impacting spending habits.  There are declining nominal interest rates despite the hikes, and more recently negative interest rate policies (NIRP) and real NIRP that deliver your dollars a one-two punch: 1) they give even less of a store of value and 2) you’re paying the bank to hold your cash.  Hint: you now know what the war on cash is really about.  They want you to go digital and be regulated, so the best risk-free liquid asset appears to no longer be short-term bonds, but rather cold hard cash in your hands, with gold and silver as stores of value that have no counterparty risk.

Back to VoM.  Last month, Lacy Hunt had an interview with Mauldin Economics at the 2017 Strategic Investment Conference and discussed why the Fed’s monetary policy is destabilizing.  Watch that first, and then view the following from January 2017 to connect the dots between inflation, GDP, and VoM. Click on the image for the video. 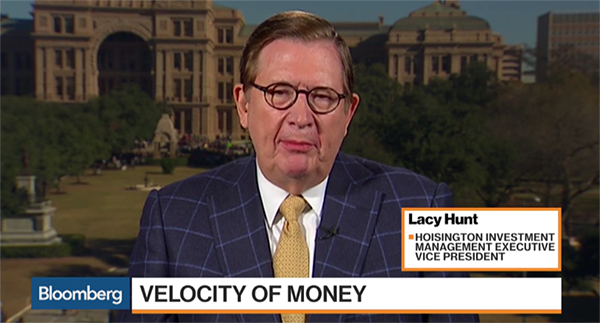 Done with hikes this year, or a lifetime after the .25% piker this week?  All the data is still bad, by the way.  And during the presser, Yellen would not specify at what point she’d consider that the Fed was actually “normalizing” and implement an exit strategy in earnest to unload that $4+ trillion balance sheet.  Flashback to Bernanke 2017…

“At big-ticket dinners, a blunt Bernanke sounds theme of low rates…  At least one guest left a New York restaurant with the impression Bernanke, 60, does not expect the federal funds rate, the Fed’s main benchmark interest rate, to rise back to its long-term average of around 4 percent in Bernanke’s lifetime. “Shocking when he said this,” the guest scribbled in his notes. “Is that really true?” he scribbled at another point, according to the notes reviewed by Reuters.” – May 2014, Reuters

Three years later, Bernanke is blogging about the topic at hand…

“The FOMC has been clear that its current tightening campaign would ultimately involve shrinking the central bank’s balance sheet, but it has also said that will not begin that process until “normalization of the level of the federal funds rate is well under way.” In short: rate increases first, balance sheet reduction later…

Has the Fed’s approach to balance sheet normalization actually changed?… My guess (and hope) is that it hasn’t. Prior to the crisis, the Fed set short-term interest rates through open-market operations that varied the quantity of bank reserves in the system, a technique which involved on average low levels of reserves—perhaps $10 billion or so. Today, the level of bank reserves is much higher, which makes it impossible to manage interest rates through small changes in the supply of reserves. Instead, the Fed manages short-term interest rates by setting certain key administered interest rates, such as the rate it pays bank on reserves held with the Fed. This “floor system” (called that because rates like the interest rate on bank reserves set a floor for the policy rate) was adopted out of necessity but seems to be gaining favor with the FOMC as a better way to manage monetary policy…

What level of bank reserves would be needed for the Fed to continue to implement monetary policy by current methods? To ensure that the floor rate set by the central bank is always effective, the banking system must be saturated with reserves (that is, in the absence of the interest rate set and paid by the central bank, the market-determined return to reserves would be zero).  In December 2008, when the federal funds rate first fell to zero and the Fed began to use the interest rate on bank reserves as a tool of monetary policy, bank reserves were about $800 billion. Taking into account growth in nominal GDP and bank liabilities, the critical level of bank reserves needed to implement monetary policy through a floor system seems likely to be well over $1 trillion today, and growing. Taking currency demand into account as well, it’s not unreasonable to argue that the optimal size of the Fed’s balance is currently greater than $2.5 trillion and may reach $4 trillion or more over the next decade. In a sense, the U.S. economy is “growing into” the Fed’s $4.5 trillion balance sheet, reducing the need for rapid shrinkage over the next few years…” – January 2017, Brookings Institute

Unwinding that Fed balance sheet is going to take at least a lifetime.

Fast forward to yesterday’s FOMC .25% dovish hike, Here are some thoughts from across the financial landscape.

The Day After: Yellen’s Big Mistake… Mark Cudmore: “What few inflation pressures did exist are now receding rapidly. By failing to comprehensively address the fact that the committee’s projections are constantly over-optimistic, they further undermine their own credibility” – Heisenberg Report

“Fed Hikes Rates Amidst Deleterious Economic Backdrop… It’s important to note, for the sake of posterity, the Fed is raising rates as retail and oil and gas stocks collapse in value. This could end up being an important factor for markets in the future, because the Fed is raising the borrowing costs for industries both maligned with debt and under duress.  Here are the year to date losses for some key industries: Department stores -38%; Oil and Gas Exploration; -31% Apparel stores; -24% Independent oil and gas -22%.” –  iBankCoin

Janet Yellen and the Case of the Missing Inflation… “it’s important not to overreact to a few readings, and data on inflation can be noisy.” – NYT

“No more rate hikes in 2017?  I absolutely believe so, because they were in a situation where they had many governors out talking about it, they had prepped the market for it. Now, if for some reason they didn’t have one they’d say, ‘Uh-oh, what does the Fed see?’ and everybody’d be running for the hills. The way they had set this up there, they couldn’t hardly do anything but raise the rates today, and they did raise them a quarter of a point. So, they didn’t do anything outstanding or go off the reservation…It’s a huge balance sheet, and everybody’s been wondering what the heck they’re going to do about it. People are particularly fearful because the last time when they stopped buying any additional bonds we had the so-called taper tantrum, and we saw this giant back-up in rates and the market totally panicked, so they’re really trying to manage expectations on that this time around… I mentioned this is a $4 trillion balance sheet right now, and what they’re proposing is to start out with not reinvesting the principal on the bonds that mature. They’re talking about maybe 10 billion a month or 120 billion a year, so that’s not a massive number relative to that $4 trillion portfolio.” – Bob Johnson at Morningstar

Bond Traders Detect Fed Error… “Yields on 10-year and 30-year Treasuries plunged after several measures of expected inflation and growth over the longer term fell, and they ended the day lower after the Fed’s announcement. In other words, the Fed’s moves have given it little room to drop rates in the future while dimming the outlook for economic expansion in years to come. That looks a lot like a policy error.” – Bloomberg

Is the Fed Done for the Year?… “Through the remainder of the year, Mr. Watters and Mr. Saigal anticipate the Treasury curve to continue to flatten, as the rate market expresses fear of recession and policy error and amid a robust global demand for yield. They are closely watching the disconnect between the more subdued views of the rate market and the exuberance in equity and credit markets. However, Mr. Saigal believes that if Washington, D.C., successfully executes on growth-enhancing reforms, rate expectations will ratchet up again and Treasury yields will likely sell off. With the current consensus that the reflation trade is over, this turn of events would likely be a significant shock to the fixed income market.” – Seeking Alpha