Jerky, erratic markets that stray from economic fundamentals are never a positive sign. We’ve seen this type of market behavior before, and it didn’t end well; nonetheless, most of the Fed-controlled media will continue to promote the narrative of a “soft landing” endgame despite the glaring red flags.

All markets lie, but the bond market is generally a more truthful and reliable indicator than the stock market – and the bond market is decidedly risk-off even while stocks are overbought. The sheer number of yield curve inversions is unbelievable:

There was no catalyst for this stunning recovery: no retraction from the President, no concessions from Xi Jinping, no spectacular earnings reports or economic data… nothing to precipitate the intraday bidding frenzy except for the ever-present T.I.N.A.: There Is No Alternative to buying stocks.

The 10-year Treasury note yield, meanwhile, was pushed back below 2.5 percent; I can’t imagine it will be much longer before real yields (i.e., the bond’s yield minus the rate of inflation) turn negative, making “risk-free” government debt assets the riskiest investment of all.

As reported by U.S. Global Investors’ Frank Holmes, there’s more to be concerned about, as the U.S. ISM Manufacturing Index for the fell sharply from 55.3 in March to 52.8 in April. Historically, nearly every time the ISM Manufacturing Index has pulled back this much, it was preceded by Fed tightening cycle and followed by an economic recession and/or market sell-off.

There’s another warning signal flashing from the lumber market, which very few analysts are mentioning. From its high in May of last year, the price of lumber has declined by nearly 50% – lumber’s sharpest 12-month decline on record. And whenever lumber has declined over a 12-month period like this, U.S. companies’ EPS followed around six months later: 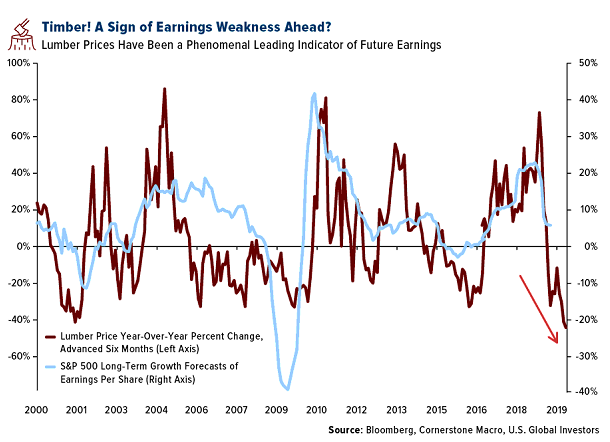 Why don’t we see T.V. analysts discussing this? Besides not fitting into the narrative that the economy is running on all cylinders and consumers should continue to buy everything in sight, a story about the lumber market simply isn’t enticing enough for prime-time news.

After all, their job isn’t to help you succeed in finance and in life: always keep that in mind when watching mainstream media programs, if you must watch them at all. Their agenda has little if anything to do with your well-being, and their job is to keep you viewing and buying in the short term even if it destroys you in the long term.

And like Rosenberg, Crush the Street reporters will continue to experience resistance when reporting the reality of the situation: “I’m getting the same rhetoric and the same pushback and questions I was back in the latter part of 2006. Remember, the Fed stopped raising rates in 2006, and in 2007, by the tail end, we had a recession nobody saw coming.”

From a technical standpoint, Steve St. Angelo duly observes that the Dow Jones Industrial Average is in an extremely overbought state. All stocks and indexes eventually come back to their 200-month moving average; for instance, in 2007 the DJIA at 14,000 was an unsustainable 75% above its 200-month moving average – and we all remember the DJIA’s “reversion” in 2008.