Truly Free Yourself This Independence Day

People need to wake up…

Since WW2, there has been an endless promise of money that is to be paid back. It’s dependent on future generations and asset inflation to the tune of 7%-8% a year in growth.

It’s become a Ponzi scheme of epic proportions. Some have even called it a state-sponsored scam that is completely dependent on the conventional system status quo.

Today is the day Americans celebrate Independence Day, and all I can think about is how much freedom people are truly lacking in the current system.

Depending on the Social Security or pension system could end up leaving people in a world of hurt, buried in increasing expenses and enslaved to their creditors.

I was floored when I came across this Bloomberg chart that put pension debt at almost $2 trillion. 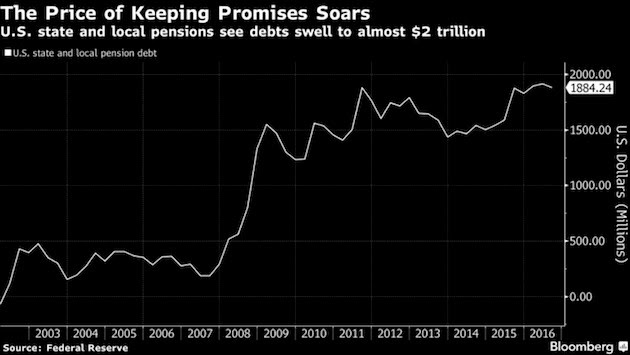 It wasn’t the total number that floored me – it was the rate of growth that is seemingly out of control. Total unfunded liabilities amounted to only $292 billion in 2007. They have more than quintupled since then, to $1.9 trillion. The cost to fund peoples’ retirement is growing parabolically.

Some have estimated the pension fiasco in the U.S. to be around $5-$8 trillion.

This debt is dependent on a growing stock market and a stable bond market, both of which are becoming a lot to ask for.

Unless you are so naive and myopic that you aren’t able to see that Ponzi schemes do eventually come to an end — so much so that once the Ponzi gets too large, it becomes virtually impossible to steal enough money from new entrants to cover redemptions from those trying to exit — the system is becoming clear.

Do we see more money printing, bailouts, bail-ins, and complete defaults to those who have been promised a constant check and a steady source of stability into retirement?

The Math is Catching Up

Government entities now have massive retirement obligations to their retirees and workers that simple math says will land them in some form of default.

I do hope you aren’t depending on that to pay your bills. What sort of quality of life will you have when depending on such a broken system and worrying about an implosion if you are 100% exposed?

The really frustrating part is that this impending crunch was completely predictable, given what we know of politics in this country.

Governments can’t forget pension obligations. Pension plans are not like other more general public services. They involve specific amounts of cash that is owed to specific people on specific dates.

The situation is actually far worse than the chart shows. The $1.9 trillion in liabilities presumes that the plans will earn far more over time than the 1.5% return they actually made in 2016. Unfunded liabilities are as much as $6 trillion by some estimates.

When we have a significant bear market during the next recession (that is not an if, but rather a when), that $6 trillion figure will balloon to double that amount or more.

I feel for the 10,000 people retiring each day in a nonexistent interest rate environment, with stocks at record valuations and both Social Security and pension plans upside down.

People are always asking me about ways to miraculously change their life. If you want true freedom, here are my 3 best pieces of advice:

1. Pay off your house. Eliminate the most expensive aspect of what it takes to live. This truly removes the risk of an unstable financial situation. Whether it’s your business failing, getting fired, pension funds imploding, or what have you, this grounds you.

2. Get healthy. This is especially true in a world post-Obamacare and with outrageous medical costs. Being healthy could result in savings of tens of thousands of dollars. Being in and out of the hospital, on meds, and going back and forth from doctor to doctor can add up quickly. Your quality of life and your finances will be much better off.

3. Generate multiple streams of cash flow. View your Social Security and pensions as secondary sources of income in addition to what you have already established. I recommend real estate (rentals), dividend-paying stocks, and lending your money at a high interest rate that is backed by an asset such as real estate.

Be resilient and take control of your situation, rather than depending on one basket full of all your eggs.