60 percent blue-chip stocks and 40 percent bonds: that (or a similar variation upon that age-old formula) how the vast majority of retirees’ money is invested. It’s disgraceful, given that they’re invested in a very-late-stage economic expansion and the Federal Reserve has ensured slow growth and meager returns for years to come.

Most retirees either have their investible capital in a retirement account created by a former employer, or they entrust their hard-earned nest egg with a money manager with a suit and tie at a big bank. Either way, there’s a zero percent chance that any of their money will be invested in so-called alternative assets like physical gold and Bitcoin right now.

Instead, they’re unwittingly loaded up on broad-market index funds and U.S. bonds, both of which are likely to underperform in the coming years. Few retirees would consider contradicting the advice of their money managers – a shame, since they’re picking up the proverbial pennies in front of an oncoming steamroller.

In a bizarre and ironic twist, the same Federal Reserve that spends taxpayers’ money like a drunken sailor and is set to chop U.S. Treasury interest rates like a maddened lumberjack is the same central banking authority that’s decimating the dollar while inadvertently boosting precious metals and Bitcoin.

By announcing the imminent Treasury yield rate cuts, the Fed has tanked the dollar, which was already overvalued after last year’s unusually strong performance. Even after a very weak month, the dollar has plenty of room to fall, and it’s already crashing below its key 200-day moving average: 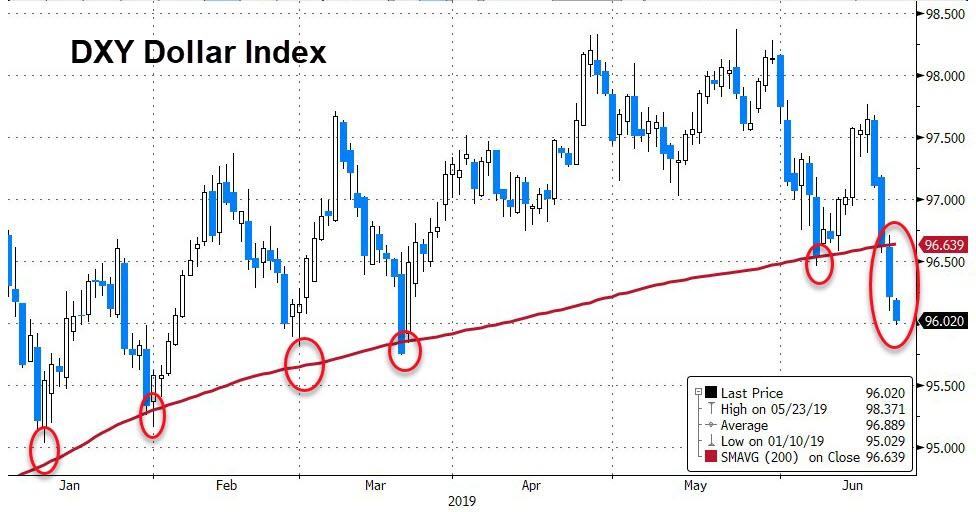 That’s not a pretty picture, and neither is the pace at which our government is closing in on an all-time high of $23 trillion in sovereign debt, which we all know will never be repaid. Money printing at breakneck speed, combined with relentless bond yield suppression, will ensure dollar weakness for the foreseeable future.

This means that retirees who plan on just keeping their money as cash will suffer from hyperinflation, the deteriorating effect of dollar devaluation as their fiat money loses whatever value it has left. And if they counted on bonds as a safe haven, they’ll learn the hard way that real rates – the bond yields minus the rate of inflation – will soon enter into negative territory.

Neither the Fed nor traditional big-bank money managers will tell retirees and other investors about the dazzling breakouts in gold and Bitcoin, which are both emerging from a challenging 2018 into a new bull market. They’d prefer that I not celebrate gold’s break above $1,400 or Bitcoin’s swift move over the $11,000 mark.

They’d also prefer that we not talk about inflation, the ultimate retirement dream killer. Analysts at Morgan Stanley predict a more than 50% increase in official inflation, going from under 2% today to over 2.6% by the 2020 election:

GDP growth will stagnate while dollar inflation will make anti-fiat assets like gold and Bitcoin more attractive than ever. Federal Reserve Chairman has basically admitted that he’d rather let inflation overshoot than hike interest rates and risk tanking the stock market like he did in last year’s fourth quarter.

The Fed has also pushed the 10-year Treasury yield below the 3-month Treasury yield, and they’ve also inverted the 5-year and 3-month U.S. Treasury yields. These are both reliable predictors of an economic recession within 12 to 18 months, which will hit unsuspecting retirees like a freight train.

Not that the Federal Reserve has ever cared about that – their first and foremost concern is the welfare and well-being of moneyed stockholders, so the Plunge Protection Team will surely prop up the stock market for a while longer. The central question, then, is whether the market will crash immediately before the 2020 election, or immediately after.

Maybe after the one-trick-pony Fed pushes interest rate cuts to the extreme, they’ll come up with another weapon: helicopter money, perhaps? Mailing checks directly to the citizens as a consolation prize for their pulverized retirement plans?

I, for one, will continue to sound the alarm and pound the table for gold and Bitcoin even while central bankers perpetuate the narrative that everything will be just fine in the land of free, the home of the brave, and the final resting place of the middle class.