Miles Franklin sponsored this article by Gary Christenson. The opinions are his.

Silver is real money, not a debt-based fiat currency that will eventually fail. Silver bullion production requires capital and effort to mine and refine. We use it for solar panels, iPhones, cruise missiles and thousands of other items. Silver is monetary sanity.

Prices for silver rise as currency units are devalued. Silver sold for $1.29 in the 1960s. Today’s COMEX price is around $16.00 because dollars buy less. Prices for physical silver are much higher. The continual devaluation benefits the political and financial elite who own most paper assets – stocks and bonds. The bottom 90% pay higher prices for necessities plus interest on their debts. Savings in silver coins will offset devaluation and loss of purchasing power.

Why do dollars buy less? The banking cartel borrows and “prints” too many of them into existence. More debt means more dollars in circulation.

How much debt have our bankers created? The St. Louis Fed tracks total credit market debt. Current US debt is about $74 trillion, over half a million fiat dollars per US worker. Insanity! The debt will be extinguished via default or hyperinflation. 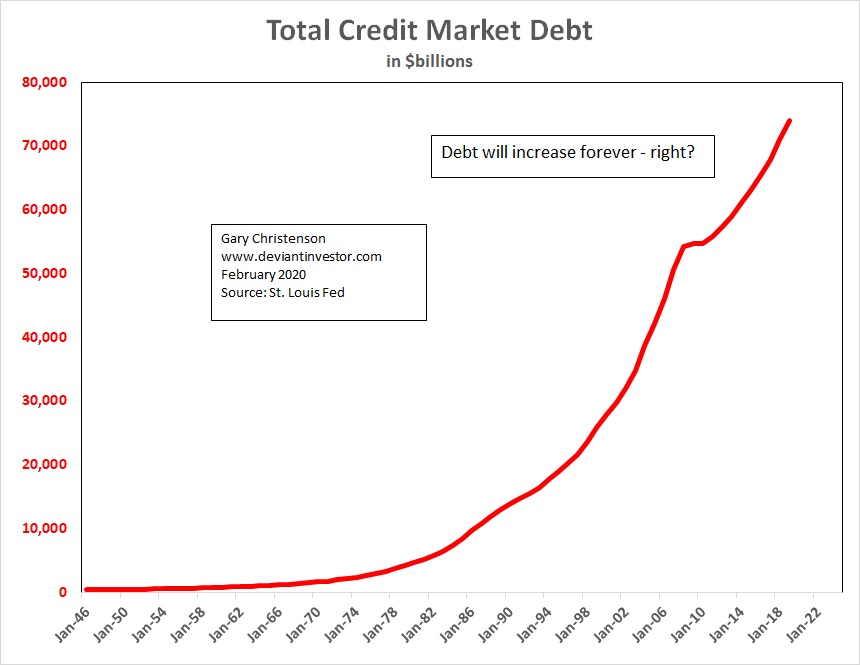 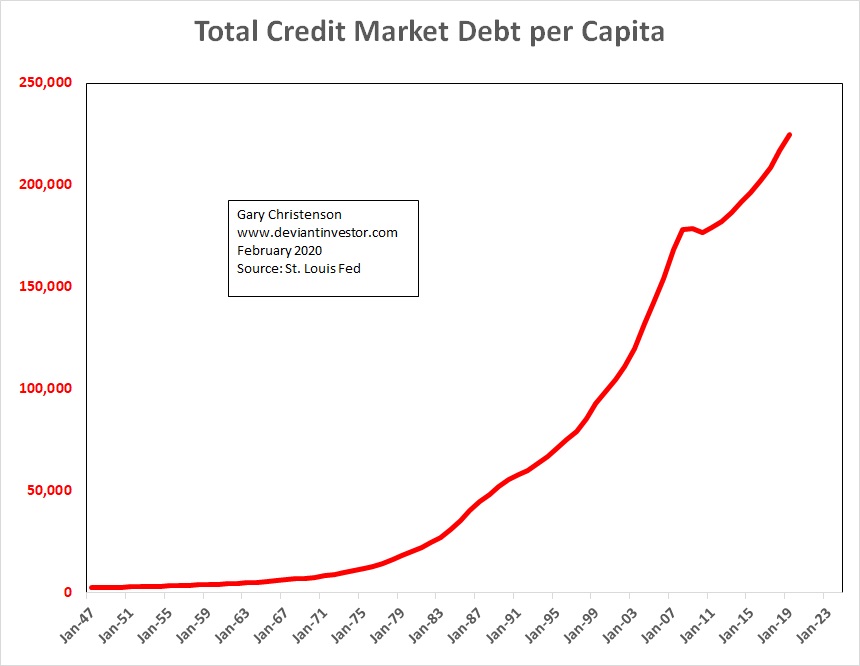 Take the above population adjusted total credit market debt and price it in silver ounces. Use the average of daily closing prices for each year to create an annual price. Debt increases faster than the price of silver, which is no surprise. The world runs on credit and debt, and currencies are debts (Federal Reserve Notes are debts of the Fed to you, the holder). The banking cartel creates billions in new debt every day. Silver prices, except in the 1970s, have not kept pace with debt creation. That will change. 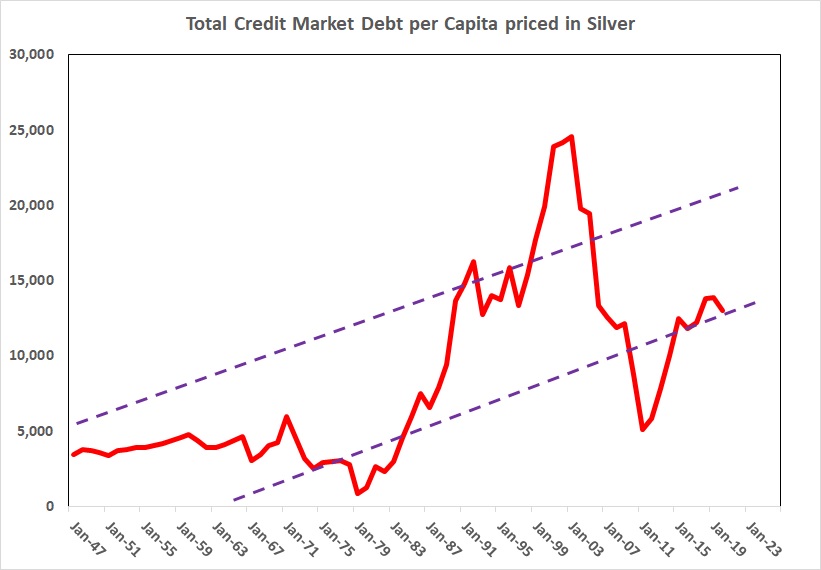 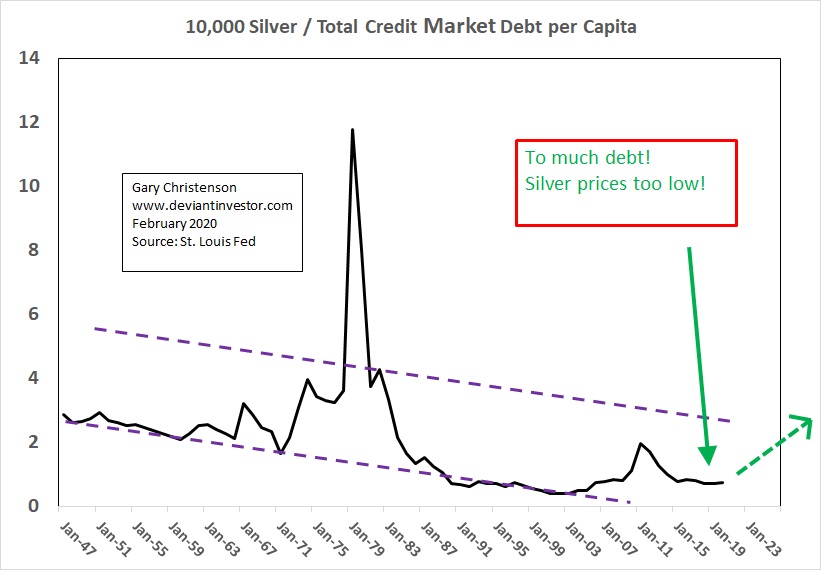 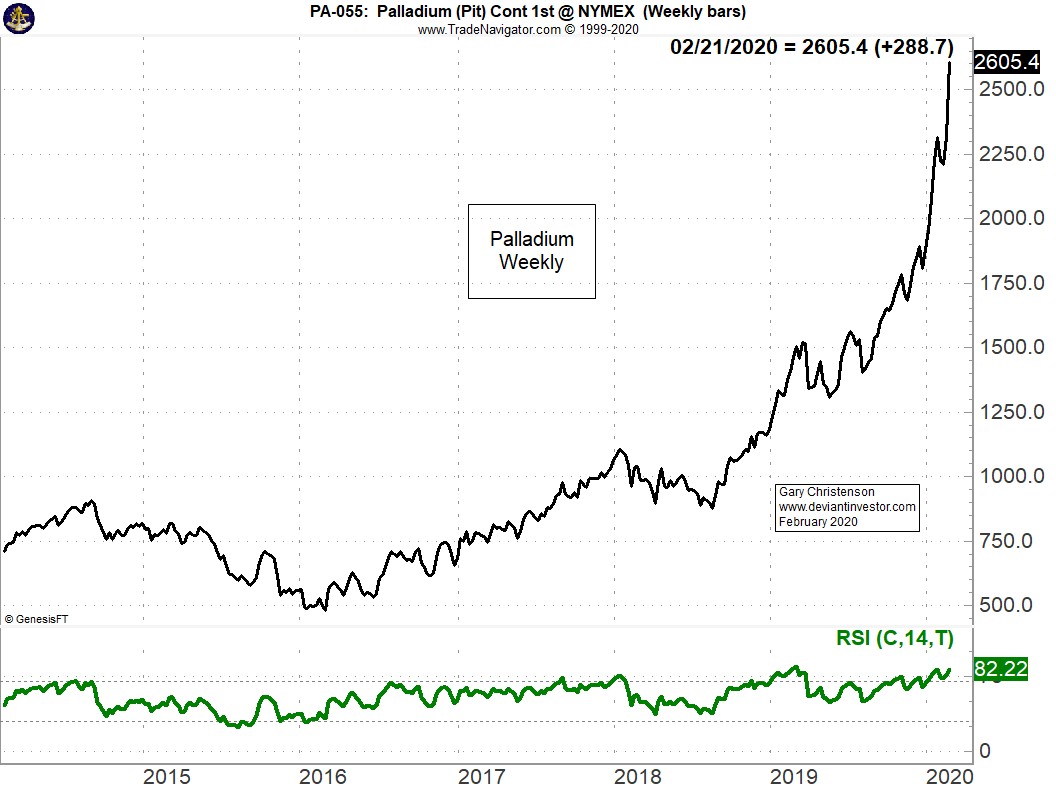 BUT LET’S BE CONSERVATIVE IN OUR EXPECTATIONS:

Using these mild and reasonable assumptions, the average price of silver (annual average of daily closes) could rise to $85 by 2025. Since price spikes can be three times larger than the annual average price (as in January 1980) the spike price of silver could be $250 without assuming global war, hyperinflation, global pandemic, central banks fighting recession with QE4ever, electing a tax and spend socialist in 2020, Universal Basic Income, MMT, negative interest rates for most of a decade, and other insane fiscal and monetary policies.

Probably not! In our crazy world, insane prices are likely. Consider:

CRAZY AND INSANE ARE A MATTER OF PERSPECTIVE.

Read: “On Leaving The Golden State.”

Read: “US Woefully Unprepared for Coronavirus.”

Read: “With Half of China Locked Down, Car Sales Plunge 92%.”

From Alasdair Macleod: “Will COVID-19 Lead to a Gold Standard?”

“Even before the coronavirus sprang upon an unprepared China the credit cycle was tipping the world into recession. The coronavirus makes an existing situation immeasurably worse, shutting down China and disrupting supply chains to the point where large swathes of global production simply cease.”

From Sven Henrich: “The Big Dodge”

“They [The Fed] caused another bubble and now they are in denial mode again. Why? Because they can never admit that the Fed is behind the financial asset bubbles that benefit the few and hurts the most when the bubbles pop.”

“The top 10% keep reaping all the wealth benefits associated with artificially propped up asset prices while the bottom 90% gets settled [saddled] with all the debt that will hang like a chain around everybody’s neck when the bubble pops.”

Miles Franklin can’t prevent a pandemic, will not trade Tesla stock, does not create debt-based currency units from nothing and is not represented at Fed meetings.

They will recycle fiat dollars into real money, silver and gold bullion and coins.