When watchdog group Truth in Accounting publishes their annual Financial State of the Cities, few expect anything less than an utterly scathing account of America’s localized debt crisis. The most recent report, however, paints a particularly bleak picture – and backs it up with facts.

The report, which comprises a comprehensive analysis of the fiscal health of America’s 75 most populous cities, came to the startling conclusion that 63 of those cities did not have enough money to pay their bills. The authors also assigned financial grades to the cities: no cities received an A, 12 received B’s, 24 received C’s, 31 received D’s, and eight cities received an F.

That’s a terrible report card, and those grades might actually be generous considering how dire the situation really is. Based on Truth in Accounting’s analysis, the total unfunded debt among the 75 cities is nearly $330 billion, most of coming from pension and retiree healthcare debt and other unfunded retiree benefit promises.

The report also exposed how local governments cook the books to cover up their fiscal mismanagement, noting that the cities shortchange public pension funds in order to help make their budgets look balanced. This practice has resulted in pension debts reaching a whopping $189.1 billion. 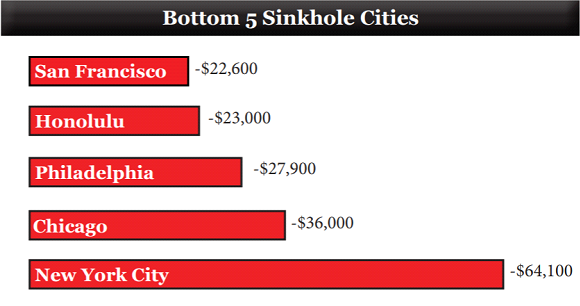 Truth in Accounting referred the most egregious offenders as “sinkhole cities,” an apt description for the nation’s biggest debtors. The list was calculated not in terms of total debt accrued, but in terms of “taxpayer burden,” or the amount of money each taxpayer would have to contribute if the city were to pay off all of its debt.

While Philadelphia and Chicago made the top three (or should I say bottom three?) list of American sinkhole cities, New York City remained in the number-one spot (as it had done last year as well) in terms of fiscal health.

And it’s probably actually worse than that, as most sinkhole cities use accounting tricks to downplay the full extent of the bleeding. By inflating revenue assumptions, counting borrowed money as income, understating the true costs of government, and delaying the payment of current bills until the start of the next fiscal year, elected officials “massage the numbers” in their favor year after year.

The result is what Truth in Accounting calls “hidden debt,” or the difference in reported versus total unfunded retiree healthcare promises. By concealing large portions of unfunded liabilities, cities deceive the citizenry by misrepresenting the true financial health of their city.

This lack of transparency has an obvious motive: career politicians want voters to re-elect them based on false claims that the city’s budgets are balanced or at least improving. By denying the voters access to truthful and transparent information, this practice makes it impossible for them to be knowledgeable participants in their governments.

And that’s exactly what they want: to operate without scrutiny by keeping the electorate uninformed. Thankfully, there are organizations like Truth in Accounting and other watchdog groups to expose the local corruption – the sinkholes, if you will – that will sink the entire nation if we’re not careful.