We’re 11 years into an overextended economic “expansion” that only expanded the bank accounts of the wealthiest 1%. All things must come to an end despite the banking syndicate’s best efforts, and a big bubble deserves a big, loud ending.

Large-cap stock prices were separated from corporate fundamentals for too long, but they can’t stay separated forever.

Now we are facing the fastest stock market drawdown in history: that’s what governments and central bankers are facing now, and it’s at the worst possible time. Their weapons aren’t working like they used to, so now they have to pull out the tanks and bazookas. They know full well that the damage has already been done to the economy and they’re waiting for the other shoe to drop in the markets.

Banks, businesses, and airlines are all desperate for stimulus packages, and this time around they’ll have to be much bigger than the 2008 bailout. That’s because the economy wasn’t nearly as government-dependent back then; today, federal intervention is the only thing preventing a full-on train wreck.

Governments know they can’t stop the coronavirus from spreading – the President knows that it won’t be under control until July or August at the earliest – but they can do the one thing they’re good at: spending and redistributing your taxpayer money. Right now, the U.S. Government is considering an unprecedented stimulus package worth anywhere from $850 billion to more than $1 trillion.

When the charts look like they’re having a heart attack – 9% and 10% back-to-back green and red days – that’s a market in its final throes. But it’s not just in the charts, as there are plenty of warning signs proving that this is the beginning of the end for overpriced asset classes.

The symptoms all point to a massive systemic failure:

Prior to the confluence of these conditions, corporate profits had stagnated for a long time, yet large-cap stocks continued to march ever higher: 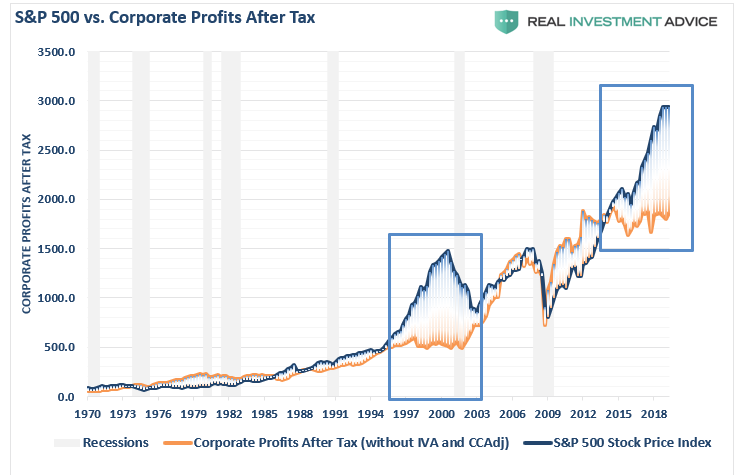 Again, the fundamentals and valuations must always meet sooner or later. Don’t count on this year’s corporate profits to jump up to where the stock market’s at. The coronavirus has prevented that from happening. Instead, the stocks must come down to where the real economy’s at – and in the process, wealth will be destroyed.

In theory, the top 1% will be hit the hardest percentage-wise since they own the vast majority of the stocks. They’re the ones who rode this wave up, and now that the party’s over, they’ll have to ride that same roller coaster back down.

The losses so far are truly staggering, as the U.S. stock market has wiped out the entire $11.5 trillion of value it has gained since November of 2016 – and that could just be the beginning. But that money doesn’t just evaporate, as the market is basically a gigantic auction house where wealth is shifted, not eliminated.

Some of that money is already entering into the precious metal space, and you can expect gold and silver prices to escalate as traditional stock market index funds become less attractive. An ancient form of wealth preservation will become modern again – big changes are afoot, and I believe metals will have their moment.