DoubleLine Capital founder and CEO Jeffrey Gundlach is known world over as the “bond king” and has made some bold projections in the financial markets. This time around, though, Gundlash is going full-on bear as he paints a bleak picture of both the stock and bond markets – as well as the economy at large.

Asserting that the U.S. Federal Reserve seems to be on a “suicide mission,” by raising rates while the government deficit increases as a share of GDP, Gundlach cited a convergence of compelling evidence: the rising deficit, weakness in multiple chart patterns, a slowdown in economic activity, and the Fed’s shrinking balance sheet.

Gundlach likes to use charts in his analysis, and citing the following chart of the S&P 500 Index, he projected that it “is going to break down… and to a lower level,” even suggesting that stocks look headed back to their February lows or worse: 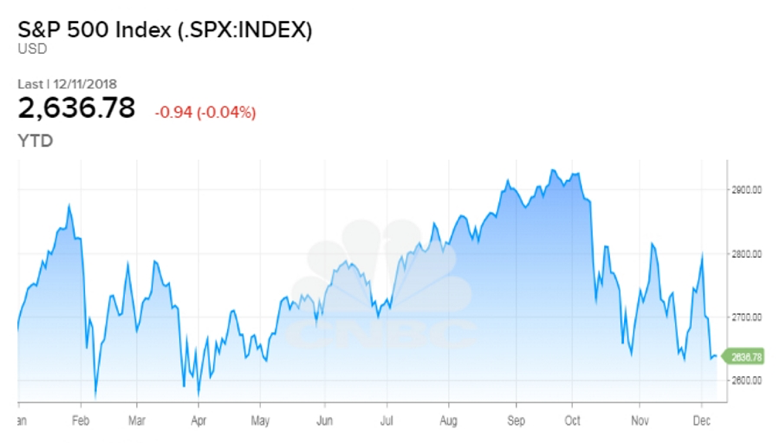 Gundlach observed that the shrinking of the Federal Reserve’s balance sheet this year coincides with the weakness in stocks, and also noted that recent consumer confidence readings have fallen short of economists’ expectations. Additionally, Gundlach cited the recent drop in the FAANG stocks (Facebook, Amazon, Apple, Netflix, and Google), stating, “You’ve got all these now in a bear market.”

Concerning the Federal Reserve’s “suicide mission,” Gunldach stated that U.S. bond interest rates may continue to rise and said that the recent rally in bond prices (which move opposite to bond yields) is “a long way from impressive.” Additionally, Gundlach observed that the economy is slowing “and maybe the supply makes it so rates don’t go down with economic weakness.”

Stating his 2019 projections, Gundlach said that “corporate bonds remain very overvalued” and “should be avoided.” In regard to the U.S. dollar, Gundlach cited concerns about the U.S. deficit, stating, “I still believe pretty deeply that the next big move in the dollar is down.”

Citing those same concerns for the dollar, Gundlach expressed his opinion that if investors insist on owning stocks for the long term, they should look outside of the U.S. markets and consider emerging markets: “I think you’ll do much better,” opined Mr. Gundlach regarding emerging market stocks compared to American equities.

Returning to his bearish outlook on the U.S. stock market, Gundlach cited a chart of semiconductor (i.e., chip) stocks going back to the year 2000, pointing out that this sector has been stubbornly unwilling or unable to stay above the highs made during the peak of the dot-com bubble: 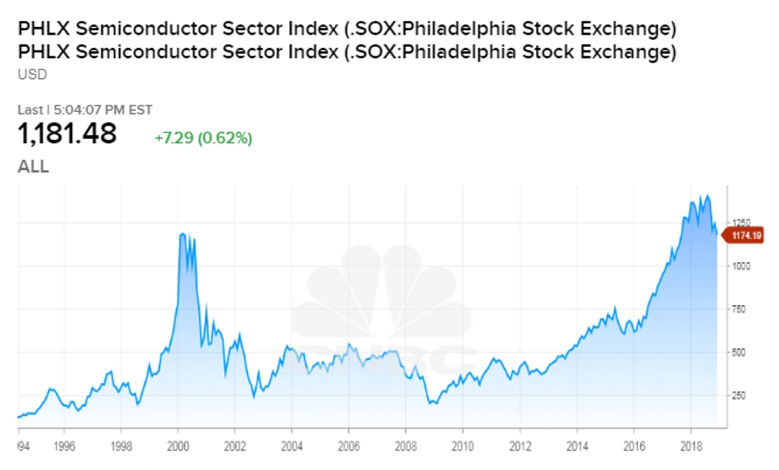 Indeed, the 1,250 level in the PHLX Semiconductor Sector Index has provided tough resistance for chip stocks, which have been an integral component of the tech stock market for years. Another area of concern for Gundlach is the financials, as U.S. bank stocks have failed to break through the resistance level established during the financial crisis of 2008: 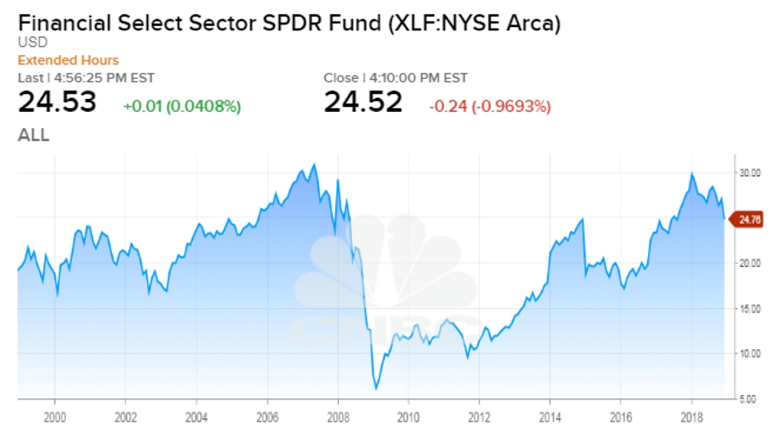 Regarding the financial sector, Gundlach predicted that banks won’t perform well despite rising interest rates if the yield curve is flattening. Gundlach furthermore observed that higher interest rates have hurt loan growth, which he expects to hurt financial profits: “It’s difficult when demand for your product is dropping.”

With the possible exception of emerging markets, it sounds like Jeff Gundlach is tilting bearish in a big way on the American markets. When the “bond king” himself is bearish on bonds, along with stocks and the U.S. economy, it might well be time to exercise caution and reposition yourself for a bumpy ride in 2019.