Trade war just got real. There is a slow piece of escalation here that just ramped up between Trump and China.

I’ll be perfectly honest with everyone here: I don’t claim to be smarter than the Fed or the people in power. Granted, I don’t think that they make sound decisions, but the honest truth is I’m not bound by an agenda in the corner and needing to cheerlead the economy. I can have an unbiased opinion that looks from the outside in that can be much different than a captain leading a ship into a perfect storm while assuring everyone it will be just fine.

I have no interest in wanting to see the U.S. fail. I have three children and a lot to live for, but there are times where rational thinking needs to usurp my heart.

Front and center of the global geopolitical theater are trade tariffs, along with Hong Kong riots, a strong dollar, emerging market slowdown, and a return to negative interest rates. There are negative interest rates to the tune of $18 trillion globally. For anyone who doesn’t understand how twisted that is, remember that both parties give something in every successful transaction. In a negative interest rate transaction, one party gives by lending funds and gives again by paying the borrower for taking their funds. A capitalist market doesn’t work like that, but that’s what we now have since the Creature from Jekyll Island was formed.

Let’s focus in on the trade wars rocking the markets…

Previous leaders in the U.S. have allowed trade to take place peacefully as other countries and partnerships position the U.S. less favorably, and the country has lost billions of dollars as our leaders have stood on the sidelines. Maybe this has to do with complete ignorance. Maybe it has to do with U.S. “rich guilt” that has kept our leaders from standing up for the American people.

History could be destined to repeat itself when we don’t learn the lessons of the past. It’s a painful lesson that America and the world learned in 2008 and, by extension, the 1930s as financial calamity engulfed the global financial structure

Few people would recall the Smoot-Hawley Tariff Act of 1930 today, but its impact on American finance and culture has been lasting and profound. It arguably prolonged what started in 1929 with the stock market crash and contributed to the decade-long depression the country experienced.

In his 1928 campaign for the presidency, Herbert Hoover promised to increase tariffs on agricultural goods, and despite a petition from more than 1,000 economists urging him to veto the legislation, Hoover signed the controversial Smoot-Hawley bill into law on June 17, 1930.

Already sky-high, the average tariff was now increased by an additional 20%; the American government has effectively doubled down on its protectionist gambit. Within two years, two dozen nations adopted similarly aggressive tariffs, precipitating a ripple effect that crossed boundaries both domestically and internationally: 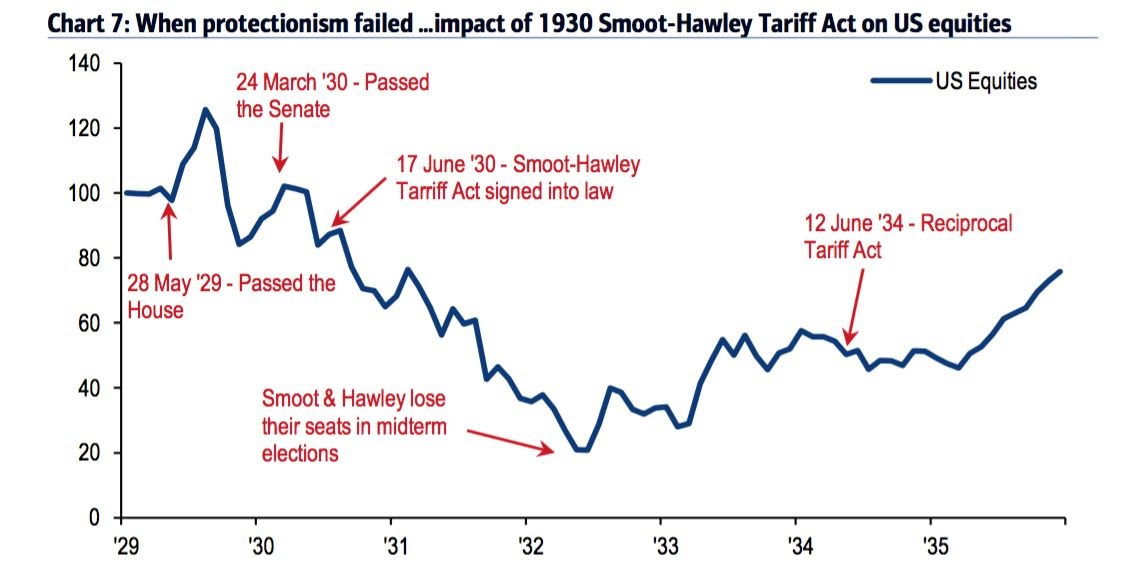 While the stock market crash of 1929 was the first domino to fall, some say that extreme protectionism, as manifested through tariff escalation, was a root cause of the decade-long Great Depression.

Having said that, I do not prefer that we go into a fight with tariffs, but we’re in a 3D Chess match with the countries and policies of the many last years.

But it’s sounding eerily familiar to what we saw happen almost 9 decades ago.

Like I said in my first video I did at the beginning of this year, we are seeing a sea change in global economics. Gold is moving higher in the face of a stronger dollar and a rising stock market.

***You certainly won’t see this news in a positive light from the Fed, but consider this: Russia’s central bank has continued its gold shopping spree this year with the latest purchase of 300,000 ounces of gold in July. The latest acquisition has brought Russia’s total gold reserves to 71.3 million ounces, or 2,218 tons. The total value of the reserves now stands at $101.9 billion.***

On top of this, Putin is encouraging Russia’s citizens to own gold by removing the value-added tax that has historically been on precious metals.

At a certain point, you have to question the path the leadership is on and acknowledge that full steam ahead into the perfect storm may not be in the best interest of your future.

Fortunately, my readers have been accumulating gold throughout the bear market, and we’ve literally had years to accumulate ounces well under $1,500. I am convinced that even at $1,500 we are still early in the game. Keep in mind that the miners have still yet to show up to the party.

If you haven’t checked out Don’t Save for Retirement, do so here. It’s a must-read and a book that is for the new economy. As you know, things are changing, and what has worked for prior generations might need some modern modifications that you won’t hear from the echo chambers of the mainstream media.

Never base any decision off of our emails. CrushTheStreet.com stock profiles are intended to be stock ideas, NOT recommendations. The ideas we present are high risk and you can lose your entire investment, we are not stock pickers, market timers, investment advisers, and you should not base any investment decision off our website, emails, videos, or anything we publish.  Please do your own research before investing. It is crucial that you at least look at current SEC filings and read the latest press releases. Information contained in this profile was extracted from current documents filed with the SEC, the company web site and other publicly available sources deemed reliable.   Never base any investment decision from information contained in our website or emails or any or our publications. Our report is not intended to be, nor should it be construed as an offer to buy or sell, or a solicitation of an offer to buy or sell securities, or as a recommendation to purchase anything. This publication may provide the addresses or contain hyperlinks to websites; we disclaim any responsibility for the content of any such other websites.  Please use our site as a place to get ideas. Enjoy our videos and news analysis, but never make an investment decision off of anything we say