If you’ve seen the film The Matrix then you know the difference between red-pill thinking, which faces frightening realities head-on, and blue-pilled thinking, which endorses a pleasant but oblivious existence. Wednesday’s Federal Reserve decision – or should I say non-decision – requires free-thinking people to take an extra dose of the red pill tonight.

After three consecutive interest-rate cuts, the Fed evidently decided that it wants to leave a little bit more room to cut interest rates in the future. If the economy and/or stock market falter, they clearly need to have some rate-cutting ammo left. That’s not what Federal Reserve Chairman Jerome Powell said outright, but reading between the lines is essential in analyzing Fed-speak.

In its post-meeting statement, the Fed declared that “the current stance of monetary policy is appropriate to support sustained expansion of economic activity,” which assumes that economic activity is, in fact, expanding. I strongly suspect that folks working in the manufacturing or shipping sector might disagree with that statement.

What’s the basis for the claim that economic activity is “expanding”? There are two pillars of the Fed’s argument. First, unemployment is low – at least, that’s what the Bureau of Labor Statistics will tell you. I’ve been arguing for years, across multiple presidential administrations, that the unemployment numbers don’t reflect the reality of part-time workers, gig workers, and folks who gave up looking for a job in despair.

The other pillar of the Fed’s argument is that consumers are spending. The Fed basically admits that there are cracks in the foundation, but hey – at least Americans are spending: “Although household spending has been rising at a strong pace, business fixed investment and exports remain weak,” concedes the official statement.

I’ve spoken and written numerous times on how an economy based on spending and consumption isn’t a healthy one. For an economy to be sustainable, there needs to be moderate spending and robust production; “You can’t spend your way to prosperity,” as Edward C. Prescott once wisely said.

The latest “dot plot” shows that the decision to keep interest rates unchanged was unanimous, with a 10-0 vote. This can be analyzed as full capitulation: the Federal Reserve has caved in to pressure to maintain the status quo. They’re going to continue the policy of forcing retirees and income investors into the stock market as government bonds pay less than the rate of inflation (1.79% 10-year Treasury yield vs. 2.1% annual inflation rate). 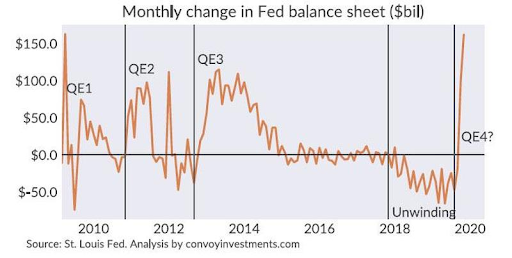 And of course, they’re going to continue injecting the cash-poor American banking system with massive amounts of capital. While Powell’s October declaration that “This is not QE… In no sense is this QE” is still ringing in our ears, the Fed is ramping up its bond-buying and emergency repurchase operations to unprecedented levels.

As we would expect, the Fed chose not to elaborate on those repo operations in its latest statement. Nor did it bother to address the uncontrolled balance-sheet expansion, but no one really expected the Federal Reserve to openly incriminate itself – their policy is invariably to stick to the script and keep the markets calm.

The markets won’t stay calm forever, though, and 2020 could be a very interesting for the major market indexes. I just hope you have your safe-haven shelters in place – and whatever you do, be sure to keep taking the red pill.