Despite domestic and global economic data points that signal Goldilocks is not necessarily a happy camper, the Federal Reserve’s “Not QE” has pushed the U.S. stock market to new highs. My recent article, “The ‘Not QE’ TaperCaper Duck Quacks Like QED,” published on Oct. 11, delves into details about the Fed’s new QE4 stimulus. If there was any doubt in your mind that the Fed is printing liquidity into the financial system at a quicker rate than during the Great Financial Crisis (GFC), one look at the current REPO facility data should eliminate any misgivings you have. 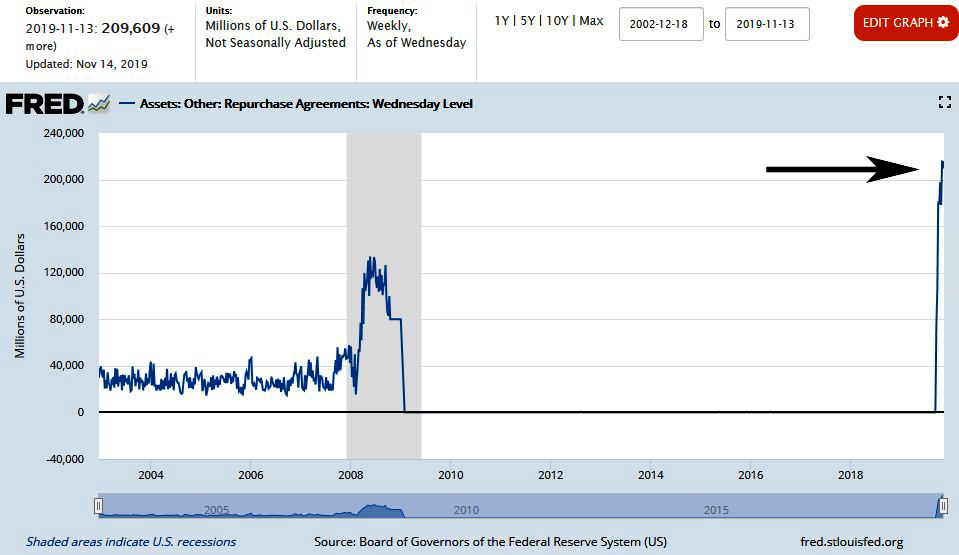 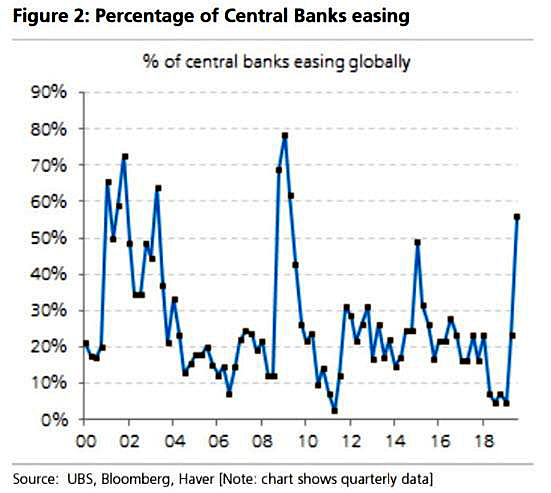 Danielle DiMartino Booth appeared on The Ticker today and provided a good overview of the Fed’s strategy going forward.

The largest bear hiding behind the curtain is concern over the China trade war negotiations, as one headline will push the market in either direction. Case in point is legislation making its way through Capital Hill today to address China’s response to the unrest in Hong Kong. The market was rolling over this afternoon, and the futures are in the red as I type tonight. The market will likely see some downside in the near-term. It is a tough call, though, because any volatility can disappear quickly as the Fed has made it clear that it will support the financial system with unprecedented liquidity.

U.S. Senate Unanimously Passes Measure Backing Hong Kong… “The vote marks a challenge to the government in Beijing just as the U.S. and China, the world’s largest economies, seek to close a preliminary agreement to end their trade war. The Senate measure would require annual reviews of Hong Kong’s special status under U.S. law to assess the extent to which China has chipped away the city’s autonomy…. Vice President Mike Pence said Tuesday that it would be difficult for the U.S. to sign a trade agreement with China if the demonstrations in Hong Kong are met with violence. ‘It tells Xi Jinping that there’s a price,’ he said of China’s president. ‘There’s one provision after another that says, we’re not kidding’… The bill would also sanction Chinese officials deemed responsible for undermining Hong Kong’s autonomy. The Senate on Tuesday also unanimously passed a bill to ban the export of munitions such as tear gas, pepper spray and rubber bullets to the Hong Kong police force. The House would still have to pass the same version of this measure as well for it to go to Trump to be signed into law… The Chinese Foreign Ministry has repeatedly warned that there would be ‘strong countermeasures’ for passing legislation supporting the Hong Kong protesters. That could affect the delicate negotiations between the world’s two largest economies to get the trade deal over the finish line… The timeline for completing the trade agreement could collide with this legislation landing on Trump’s desk… but a senior administration official on Monday cautioned that Trump’s seal of approval is the only one that matters. Because the Hong Kong bill passed both the House and the Senate without a single lawmaker objecting, there would probably be enough support to override a presidential veto.” – Bloomberg, Nov. 19

Today’s technical analysis will focus solely on the monthly chart and eliminate the daily and weekly noise. To view a larger version of any chart, right-click on it and choose your “view image” option. 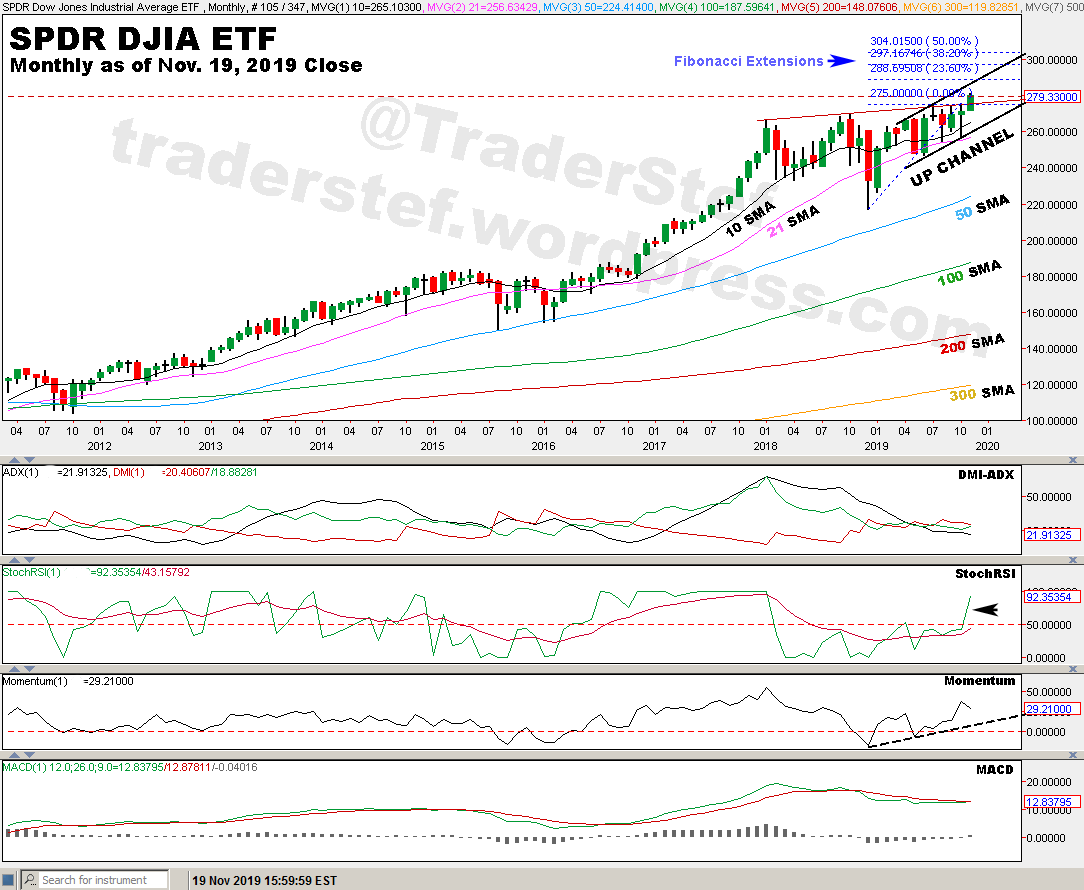 At first glance, the Dow is clearly in the bullish camp. I have included a few Fibonacci extensions to identify near-term resistance levels if the price action continues higher. The lateral breakout price was $275, and subsequent resistance levels are $289, $297, and $304. The $DIA closed at $279.33 today. The topside resistance trendline drawn back to early 2018 (red line) was taken out after the price chopped within an Up Channel for seven months, all of the Simple Moving Averages (SMA) remain below the price action and in bullish alignment, and the StochRSI is spiking to the upside.

The remaining studies bring caution to the table. The DMI-ADX has not yet reverted into a bullish set-up, the Momentum indicator remains in an upward trajectory but is rolling over this month, and the MACD is indecisively flat.

The Volume is not included on either chart, as it has fallen steadily since the GFC and is unremarkable for today’s analysis. 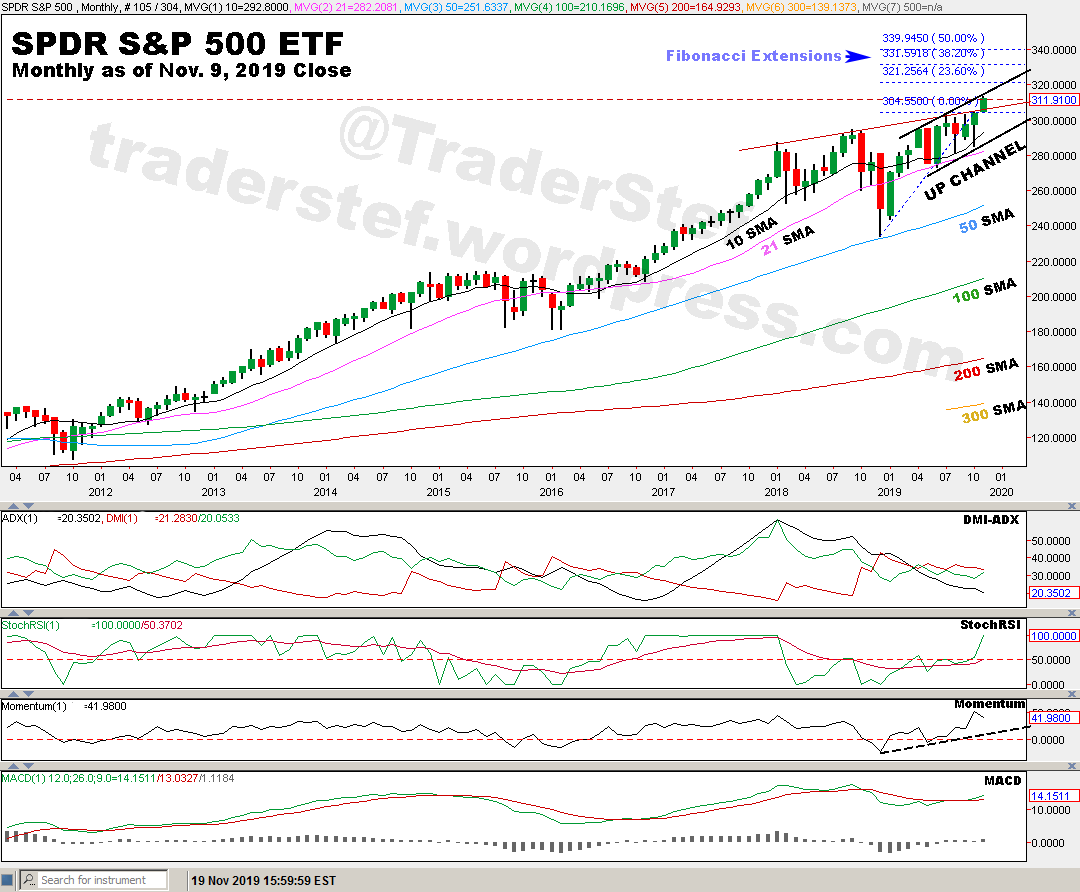 I consider both charts bullish but ripe for downside and upside Scalping opportunities rather than long-term core positioning at this time.

Jim Grant on the Santelli Exchange: The Fed’s quiet about-face…