Last evening at around the stroke of midnight EST, an article appeared in the Asian mainstream financial media that raised pertinent questions about the virulence and severity of the current SARS 2.0 coronavirus (2019n-CoV) outbreak. The futures for U.S. stock indices began rolling over on those headlines and continued throughout the U.S. trading day, with the exception of a small bounce into the last hour of the session. It appears that Goldilocks has stepped behind the curtain with her N95 facemask after reading the Forbes magazine article that called the coronavirus outbreak a “black swan” last Monday, and the bear is ready for the limelight.

Study suggesting earlier human transmission fuels public anger… “The deadly new coronavirus from Wuhan was spreading from person to person as early as mid-December, weeks before China officially confirmed such transmission, government-funded Chinese researchers report in a top American medical journal. The paper in the New England Journal of Medicine analyzes data on the first 425 confirmed cases in the central Chinese city of Wuhan… ‘There is evidence that human-to-human (H2H) transmission has occurred among close contacts since the middle of December 2019.’ The paper notes that seven health care workers contracted the virus between Jan. 1 and Jan. 11 — significant evidence of human-to-human transmission. The findings sharply contrast with the accounts of Wuhan health authorities who had maintained until mid-January that there was ‘no clear evidence’ that the virus could be passed among humans. Officials also claimed Jan. 11 that no health care workers had been infected.Public acknowledgment only came Jan. 20 via an interview with an expert commissioned by the National Health Commission on state broadcaster CCTV. The paper also found that only 55% of the 47 infected patients before Jan. 1 were linked to the seafood and live-animal wet-market thought to be ground zero. This means that other patients either got infected elsewhere or from other people.” – Nikkei Asian Review, Jan. 31 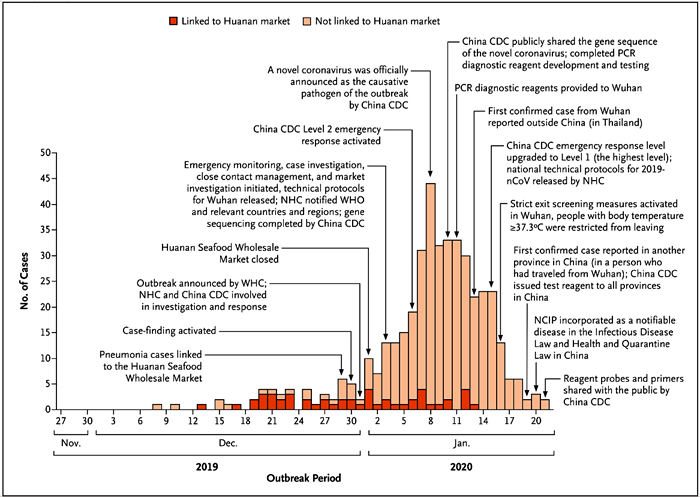 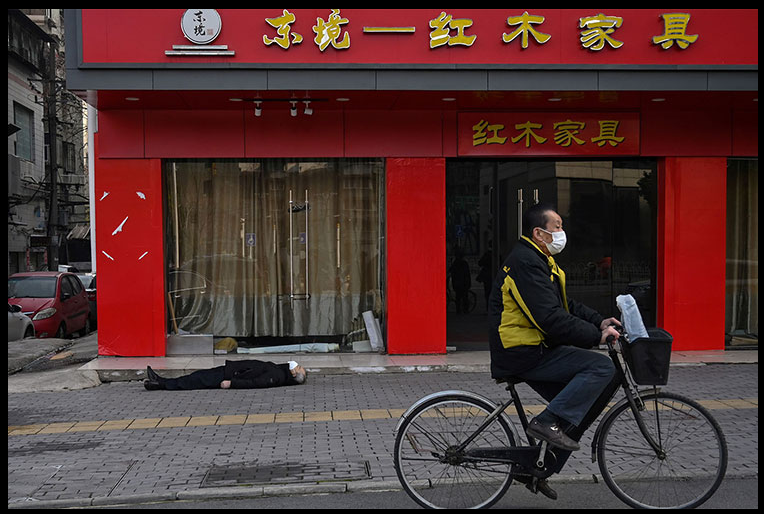 Before moving on to technical analysis of the Dow and S&P 500, a quick reminder from my Jan. 29 article is that it has become very difficult to keep up with rapidly evolving details on the coronavirus story. I am keeping a Twitter thread alive with relevant updates as much as possible that originates from the Jan. 21 article noted below.

There are a few news items worth mentioning in case you missed them that will increase the impact on financial markets and the global economy, as H2H onward-transmission and onward-progression is now confirmed outside of mainland China. The first hint of a slowdown in international travel appeared over the last two weeks when flight crews threatened boycotts and several airlines eventually suspended flights into China, and countries around the world began restricting cross-border travel for their citizens and tourists.

“What we don’t know is what the potential spillover would be from a financial market event in the Chinese credit markets, which remain to western investors a huge black box.” – Danielle DiMartino Booth on CNBC 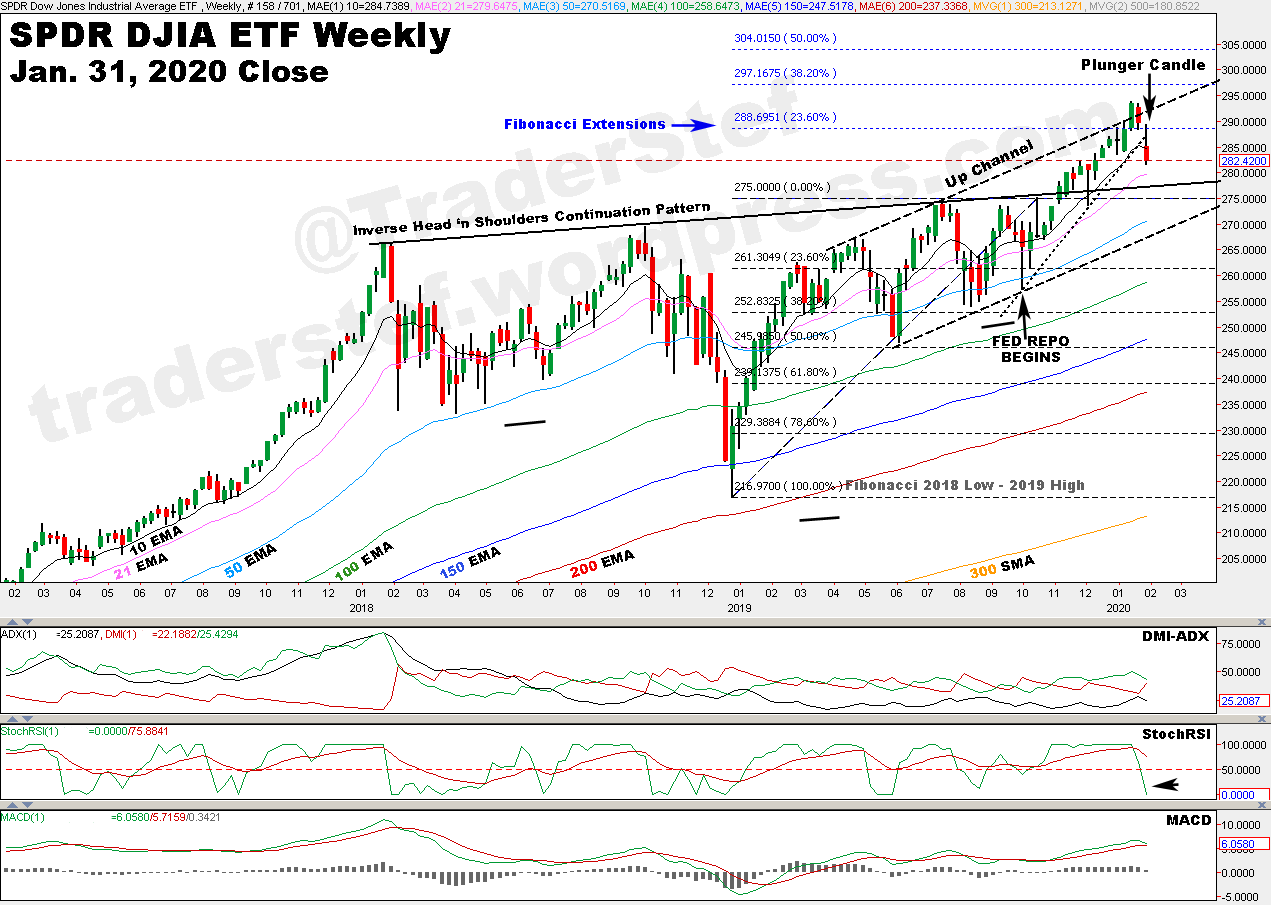 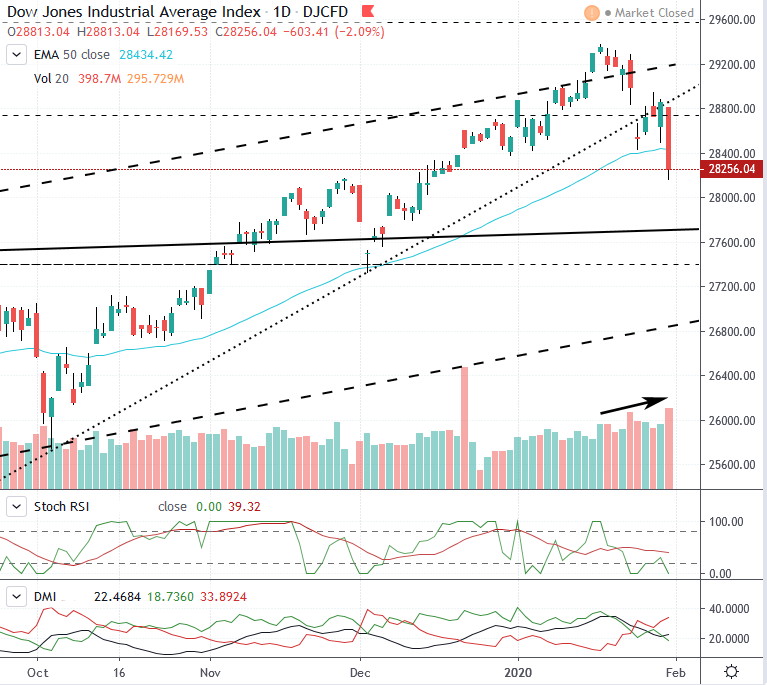 “The Up Channel and Inverse Head ‘n Shoulders continuation pattern confirmed with the price rally having breached the first Fibonacci Extension at $288.69 and today’s close of $290.35. There is no resistance while trending into these new highs and only Fibonacci levels can serve as a guide until a chart history manifests. The DMI-ADX remains positive but flat overall since the low in Apr. 2018 and the MACD uptrend is intact. Two negatives that are indicative of a potential correction in the near-term are that the StochRSI is stuck in overbought territory since late Oct. 2019 and the Momentum indicator is rolling over.”

Since my last analyses in mid-January, the DIA ETF printed a high of $294, with the DJIA index at 29,374 on Jan. 17. News on the coronavirus outbreak began to dominate headlines shortly thereafter.

Price action on the weekly DIA chart made an effort to take out the topside trendline of the Up Channel before giving in to selling pressure. Note that the previous week’s candle closed on the 23.6% Fibonacci Extension before taking a much larger plunge this past week. The biggest selling pressure occurred after violating the lower trendline drawn up from where the Fed began REPO operations in Sep. 2019, and the price action never recovered (see DJIA index daily chart detail) after Dead Cat Bounces failed to break back above that trendline.

The price has closed below the 10 Exponential Moving Average (EMA) this week and will likely find its next level of support at the 21 EMA and neckline of the Inverse Head ‘n Shoulders continuation pattern. If those levels are breached, the $275 high where the Fibonacci Extensions were drawn upward and the 50 EMA near the lower trendline of the Up Channel are the next bus stop. The DMI-ADX is threatening to go negative, the StochRSI has plunged quickly into oversold land, and the MACD is threatening a rollover. This week’s candle printed a bearish Plunger at the close.

The DJIA daily chart is uglier, with the DMI-ADX forming a bearish Alligator Tongue, the 50 EMA was breached to the downside on today’s price plunge, the StochRSI had a Dead Cat Bounce and then rolled over again, and sell Volume is trending higher while the price is falling.

Most of the studies and indicators quickly turned bearish in just under two weeks due to global pandemic fears, which threatens a fragile global economy supported by fiat monetary accommodation from central banks around the world. 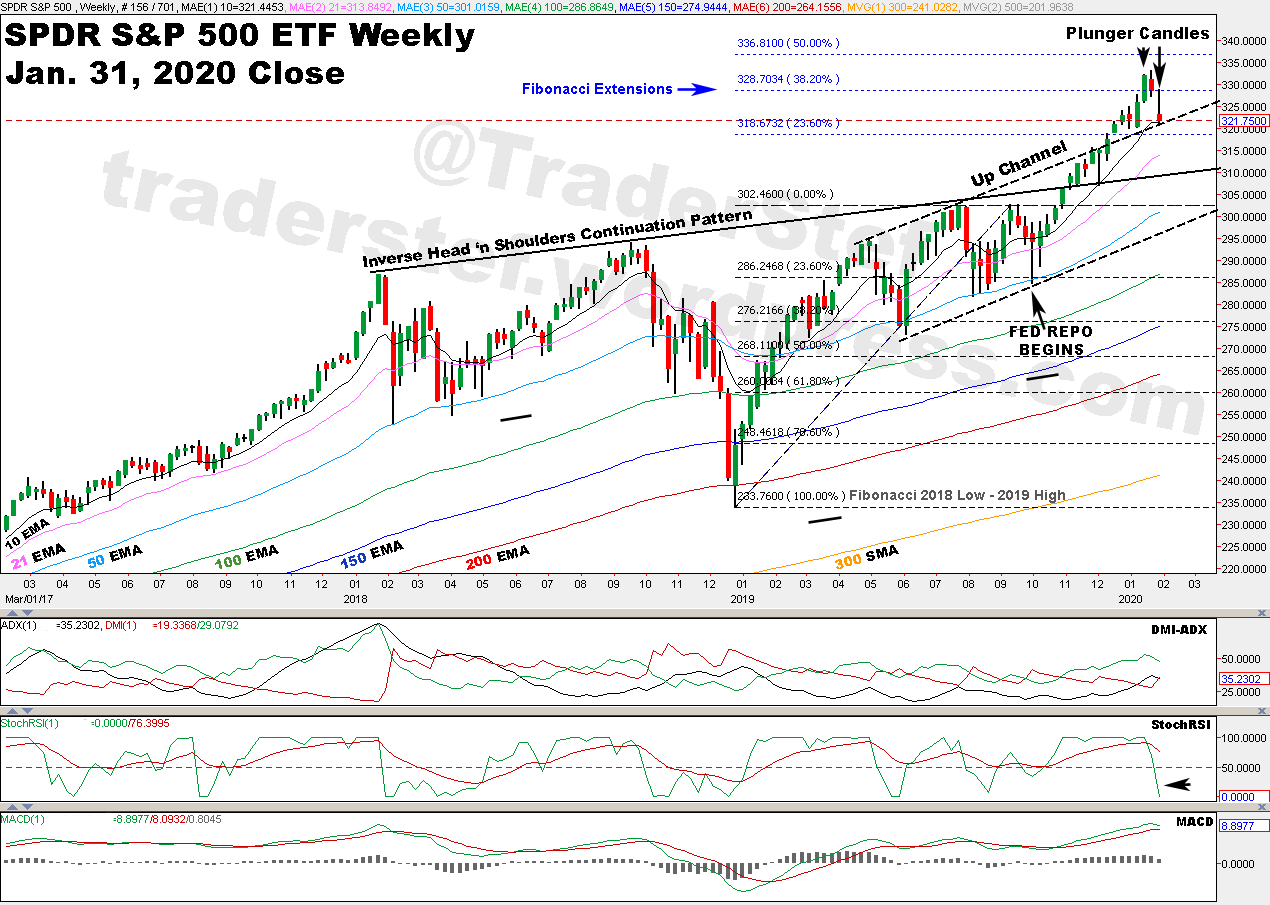 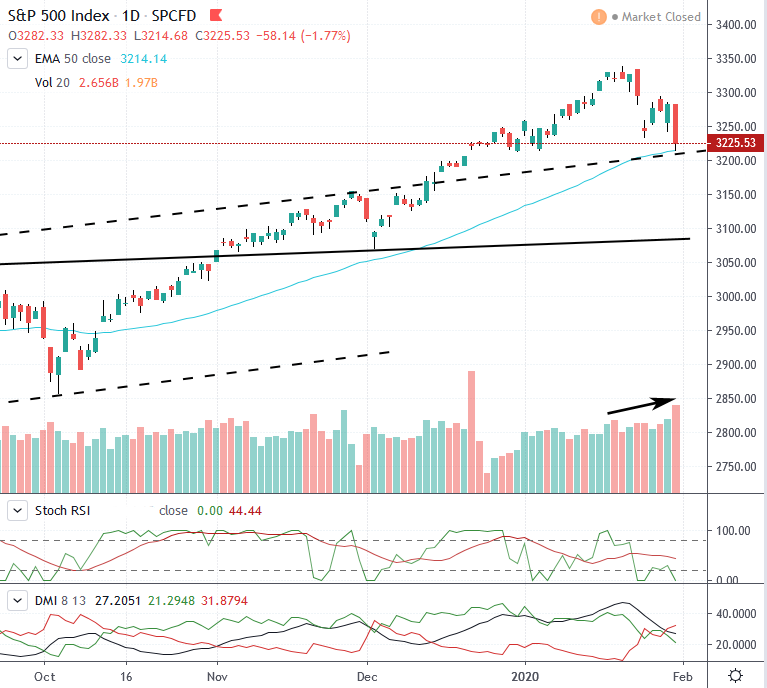 “There are two differences between the DIA and SPY charts today besides price points, and they are a Divergence. The first is a Plunger Candle (aka Shooting Star with a long body) that printed last week, which increases the potential for a price correction in the near-term. The second is the DMI-ADX that is setting up with a bullish Alligator Tongue pattern….My expectation for the price action going forward remains the same as it was in Nov. 2019, short of a major event that shocks the market to the downside… both charts remain bullish and are ripe for downside and upside Scalping opportunities rather than long-term core positioning. A substantial retreat will eventually occur and sidelined cash will take advantage of those lows.”

Since my last analyses in mid-January, the SPY ETF printed a high of $333, with the S&P 500 index at 3,328 on Jan. 22. The S&P is slightly less bearish than the Dow with its rollover beginning 5 days later, the Up Channel’s topside trendline has not been violated, and the 50 EMA on the S&P 500 index daily chart has not been violated. However, I must emphasize that those three points do not lessen the threat of a larger breakdown in the near-term. All of the studies and indicators are very similar to the Dow charts.

My expectation for the price action going forward with the Dow and S&P is more bearish than noted on Jan. 15 with further losses on the table. There will be bouts of extreme volatility. Both indices are ripe for downside Scalping opportunities by seasoned traders. This is a good time for passive investors to have a money-market account in place and transfer the most vulnerable portion of a portfolio into cash, which will conserve capital gains while waiting for the correction to probe a bottom.

Headline cartoon by John Prichett and Goldilocks layered in by TraderStef.