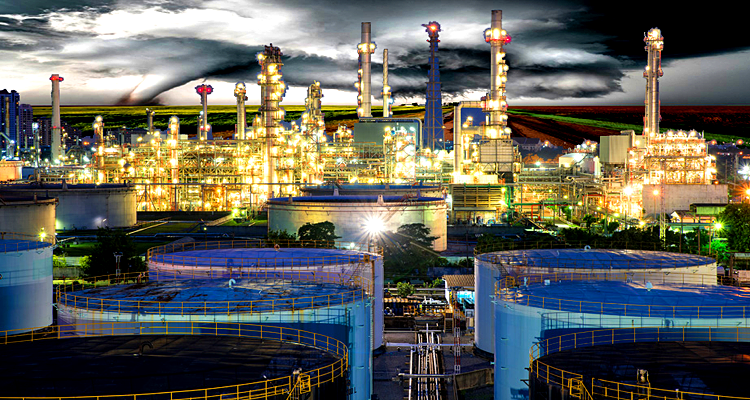 The crisis with oil and gasoline prices in the U.S. has grown much worse since I penned “The Inflationary Black Gold Rush at the Gas Pump” Part 1, 2, and 3 from Feb. 2021 through Mar. 2022. Today’s focus is on diesel fuel that skyrocketed to an all-time high this year and warnings of diesel shortages that are slated to begin in the mid-Atlantic and Northeast regions of the U.S. within weeks. Disregard nonsensical narratives that emanate from the Biden administration that blame everything on Putin, Trump, oil companies, or the inability to mind-read challenges in the future.

There is a lot of blame to go around and not limited to Biden’s destruction of U.S. energy independence that’s bleeding the strategic petroleum reserve (SPR). We have an out-of-control monetary policy at the Fed and fiscal mismanagement on Capitol Hill, a stagflationary global economy on the brink of recession, a pandemic mired by an experimental intervention that’s deadly, an ongoing supply chain crisis, and war in Ukraine due to inept national security policy with damaging rhetoric from both sides of the pond that’s increasing the fear of a nuclear exchange. When you add those factors to the unmitigated shutdown of six refineries in the U.S., the upcoming closure of a seventh, and only one new oil refinery built since 1977, it’s no wonder the potential for a diesel fuel shortage is on the horizon. 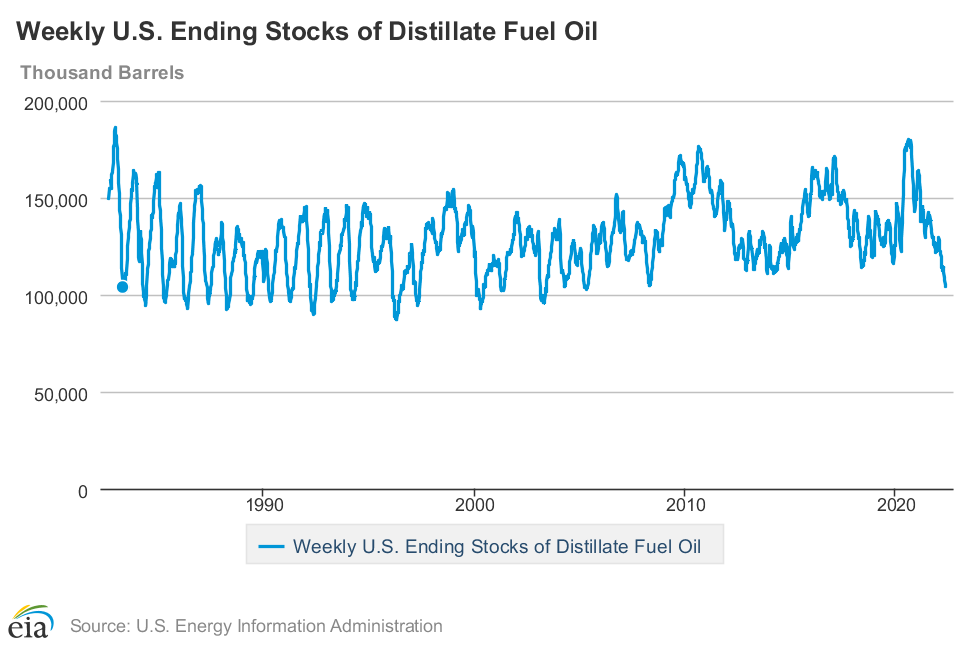 The cost of producing and delivering diesel fuel to consumers includes the price per barrel of crude oil, refinery processing, marketing and distribution, federal and state taxes, and retail station operation. The following chart from the EIA breaks down the components responsible for the per-gallon price of diesel fuel on a percentage basis: 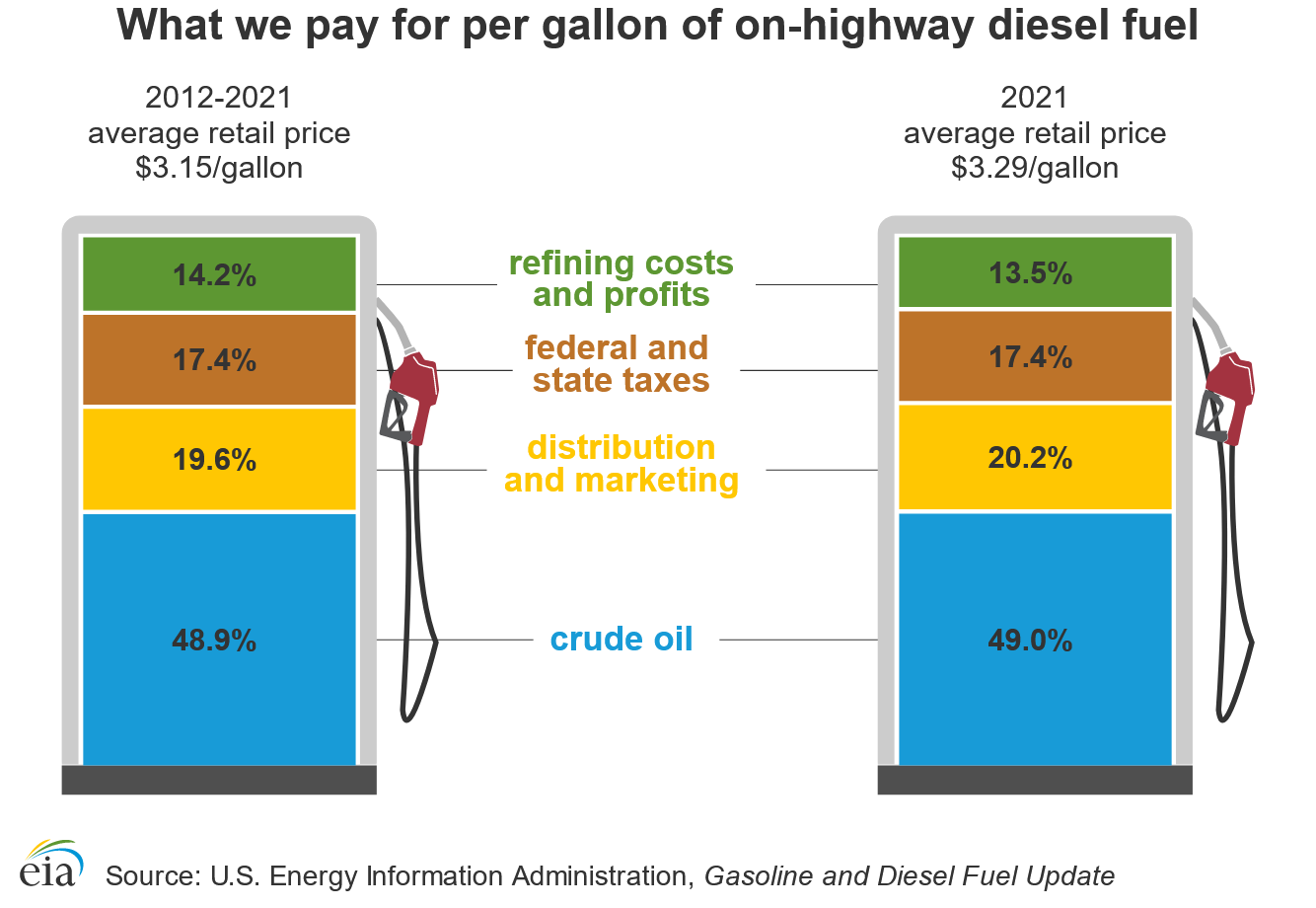 The Real Reason Gasoline And Diesel Prices Are So High… “The Russian invasion of Ukraine supplied the president with an obvious bogeyman for the high cost of fuel. The president has often referred to ‘Putin’s war,’ as being responsible for the high cost of driving for Americans. An assertion that doesn’t bear up under strict scrutiny. There is a vague association that can be made, however, as the loss of Russian supplies, and near-universal embargoes, have stressed an already tight situation globally… In 2020 refining capacity declined by about 900K BOPD due to a number of plant closures. Demand was muted for the first half of 2020, but surged back… As Bloomberg notes, we are exporting more. Thanks to European refinery closures they need some of our supply, with several hundred thousand barrels being shut down.” – OilPrice.com, May 16

The next chart relies on data from the St. Louis Fed (FRED), which calculates the average price per gallon of diesel fuel across the U.S. as $5.61 on May 16. In my neck of the woods in New Hampshire, the average price on GasBuddy clocks in at $6.35. 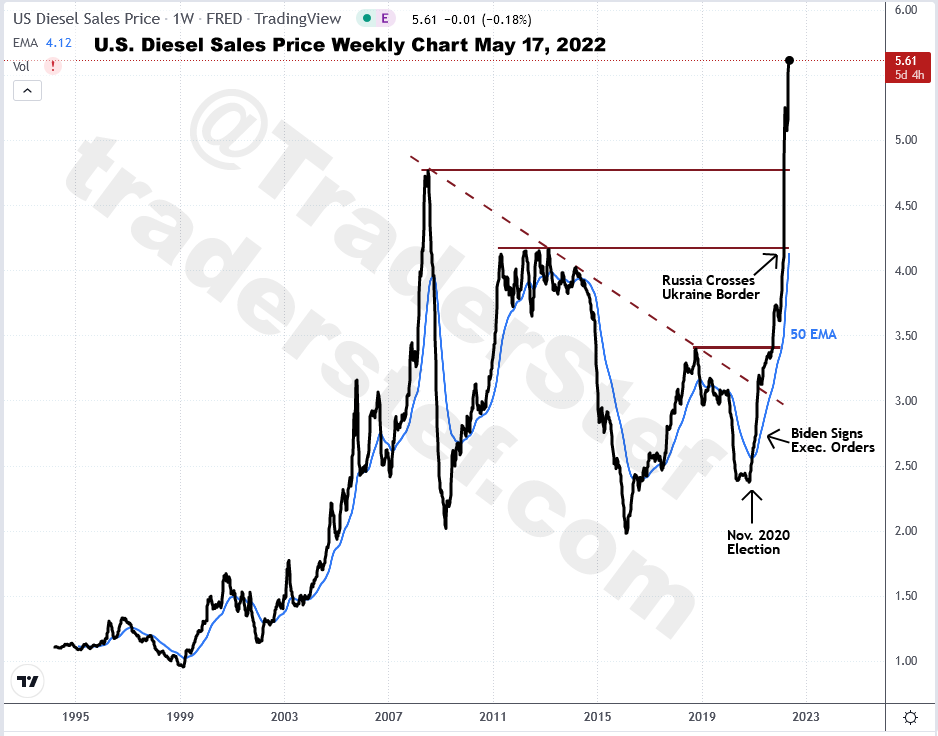 Rising diesel prices put pressure on New Hampshire farmers… “A gallon of regular unleaded gasoline in New Hampshire is averaging $4.58, while diesel has gone up to $6.35. New Hampshire farmers said that as the cost of diesel fuel continues to rise, so does the cost of maintaining tractors and other equipment. Daniel Hicks, of Sunnycrest Farms, said diesel is essential to running the 100-acre farm. ‘We need our tractors. We need our machinery. I can’t just jump on a horse and start plowing the fields like we did in the 1800s.’ Hicks said that a year ago, the farm paid $2.75 for a gallon of diesel. It’s now more than double that. ‘It’s definitely a domino effect because after tractors, we have pumps that pump an entire field of irrigation, and that’s all run by diesel.’  Hicks said the farm is also paying 60% more for pesticides and herbicides and 50% more for fertilizer.” – WMUR-9, May 17 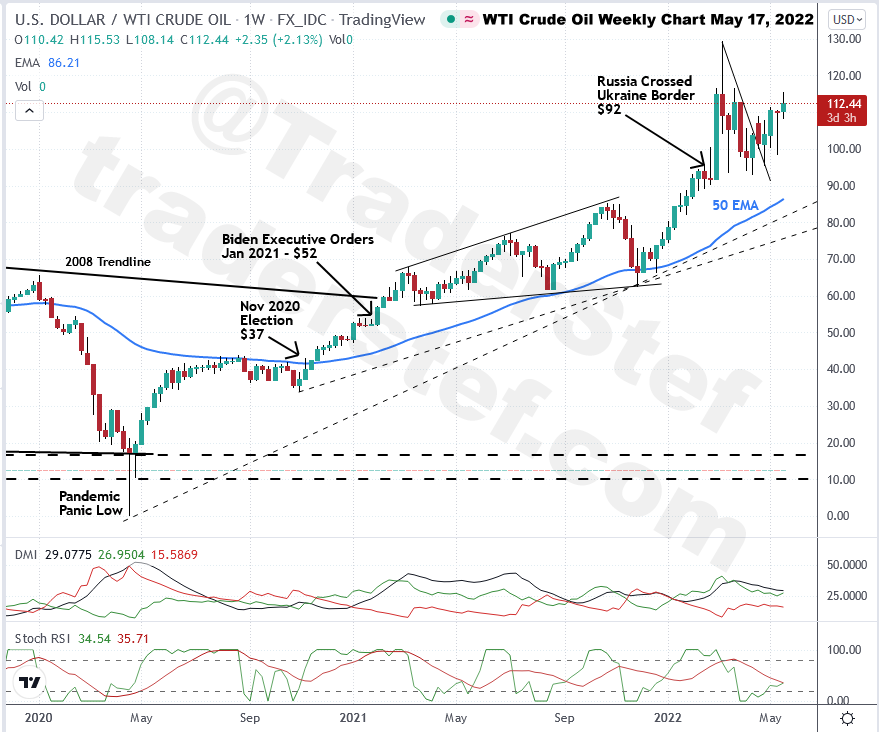 WTI Rebounds After Big Surprise Crude & Gasoline Draws… “Judging by where crude and wholesale gasoline prices are, we could see $5 within days. And all this as the SPR hits its lowest level since 1987.” – ZH, May 17 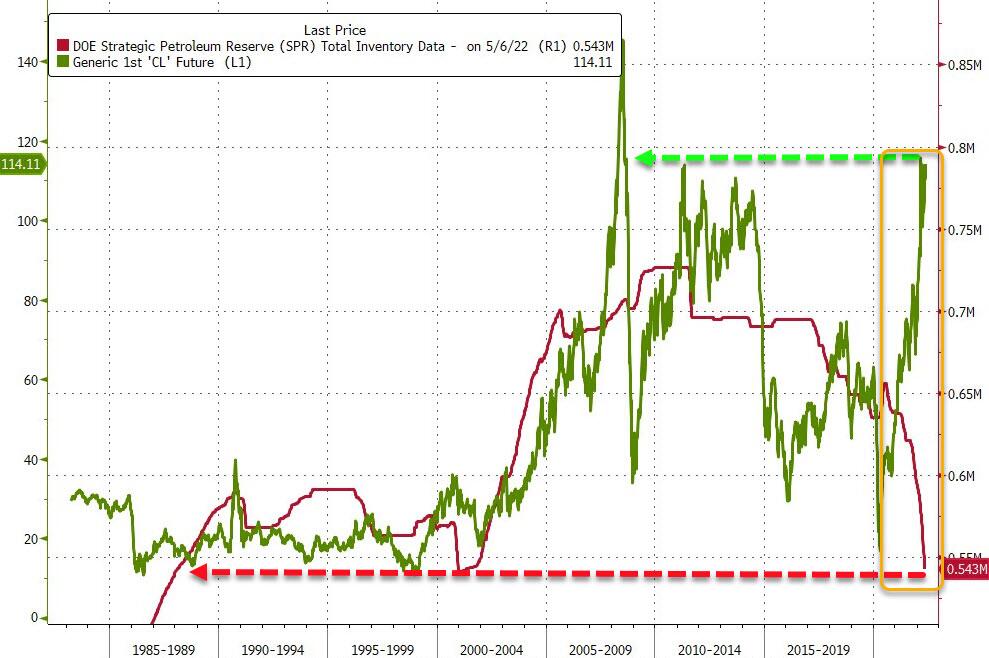 It does not matter how much we could “drill, baby, drill” if the Biden administration lifted the regulatory bottleneck because we don’t have the capacity to refine the oil we have to match demand. In 2020, U.S. oil refinery capacity peaked at 19 million barrels per day. Due to the pandemic and a decision to permanently close the Philadelphia Energy Solutions refinery after an accident in 2019, refinery capacity took a turn for the worst because PES was the largest oil refinery on the East Coast at 335,000 barrels per day. Other refineries that shut down in 2020 were the Dakota Prairie in ND, HollyFrontier in WY, Shell in LA, Tesoro Marathon in CA, and Western Refining in NM. They collectively refined more than 1 million barrels of oil per day. An additional 265,000 barrels are slated to be taken offline when the Lyondell Basell Industries refinery in Texas closes sometime in 2023.

The US Can’t Make Enough Fuel and There’s No Fix in Sight… “At the same time American refining shrinks, the war in Ukraine has made the global divergence between supply and demand even more acute. With many countries shunning Russian fuel exports in the wake of the war, the US is now supplying more of the world’s fuel with an ever-shrinking fleet of plants. Europe has been seeking alternatives to Russian diesel since the war began, while fuel demand in Latin America, the largest buyer of US refined products, is strong and growing. Meanwhile, the US is itself gearing up for a spike in consumption this summer.” – Bloomberg, May 16

OPEC+ Ministers Say Pumping More Oil Won’t Ease Gasoline Prices… “Saudi Arabia’s energy minister said a dearth of refining capacity meant that gasoline and other oil products would remain expensive even if the world’s biggest exporters pumped more crude… ‘There is no refining capacity commensurate with the current demand and the expectation of the demand in the summer,’ Bin Salman said this week.” – Financial Post, May 16

Now that the U.S. is approaching pre-pandemic levels of demand and refineries are pumping out fewer gallons of fuel per day, higher demand and lower supply equals higher prices, and in some cases, there may be shortages.

Truckers concerned over possibility of diesel fuel shortage that could impact supply chain… “According to several trade publications, diesel supplies on the East Coast are now the lowest in almost 20 years. The Pilot Flying J company confirmed to 11 News that there are currently supply issues in several markets, writing in a statement: ‘We are aware of concerns over diesel supply in specific markets across the United States. We are closely monitoring the situation and strive to remain the most reliable network of travel centers for our customers’… With diesel fuel now surpassing labor as the industry’s No. 1 expense, fuel shortages could be devastating. ‘If we don’t have diesel, then we can’t run,’ said Louis Campion, president and CEO of the Maryland Motor Truck Association. ‘They were out of diesel and gas. Richmond was out completely, and that was at the TravelCenters of America,’ said Larry Sechrist, a truck driver. Sechrist, who delivers petroleum product, said he saw the shortages firsthand. ‘It’s scary, something I just heard about the other day, I didn’t know there was a shortage coming. I didn’t realize how bad it was until I experienced it last night,’ Sechrist said.” – WBAL TV, May 12

With shortages for various consumer goods piling up in the U.S. supply chain, any minor disruption in diesel fuel supply could domino into a major crisis. The just-in-time inventory life has everyone living on the edge as a historic inflationary surge decimates household budgets. Consider the Bank of England’s “apocalyptic” warning about global food inflation and shortages, the baby formula scandal, and the bird flu epidemic sweeping through U.S. poultry supplies.

Imagine if a serious diesel fuel shortage impacts New York City. I lived there for over 20 years, and I am certain that every square inch of that island’s economy is reliant upon trucking to deliver life. Buy food! 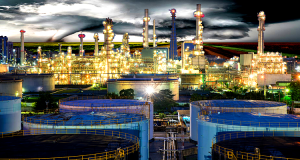