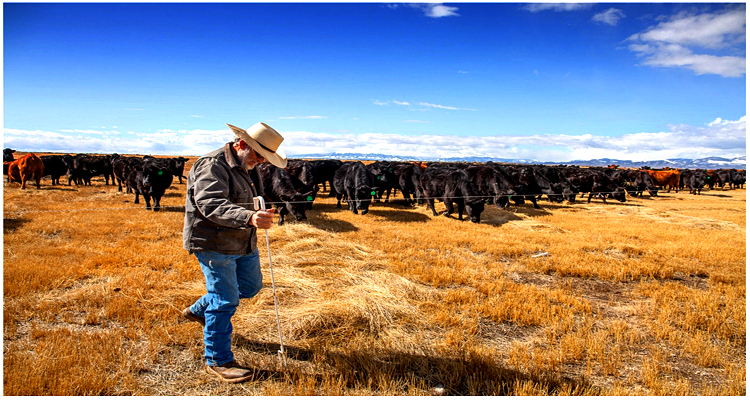 A majority of city dwellers probably take for granted the supply chain responsible for farm-to-table food available at the local grocery store, and that process is not rocket science. A prolonged drought takes its toll on the soil as plants struggle to bloom or don’t grow at all. If plants and grassland are not blossoming, cattle are unable to graze on the food that nature designed them to consume.

Cattlemen in the western United States spend up to 50% of their budget on supplemental feed, and any disruption in time spent by cattle grazing on quality pasture results in higher feeding costs. When that cost increase is combined with calves and live cattle that struggle to gain weight due to weather or low-quality feeding, the financial impact on a ranching operation can be disastrous. A drought can also increase the cost of grain or hay, and supplemental feed options become too expensive. There are few options that livestock producers can implement to mitigate damage to a herd when a severe drought is prolonged to a point where no recovery is possible due to damage already done or the amount of seasonal time nears its end.

The following map breaks down how the U.S. uses its land: 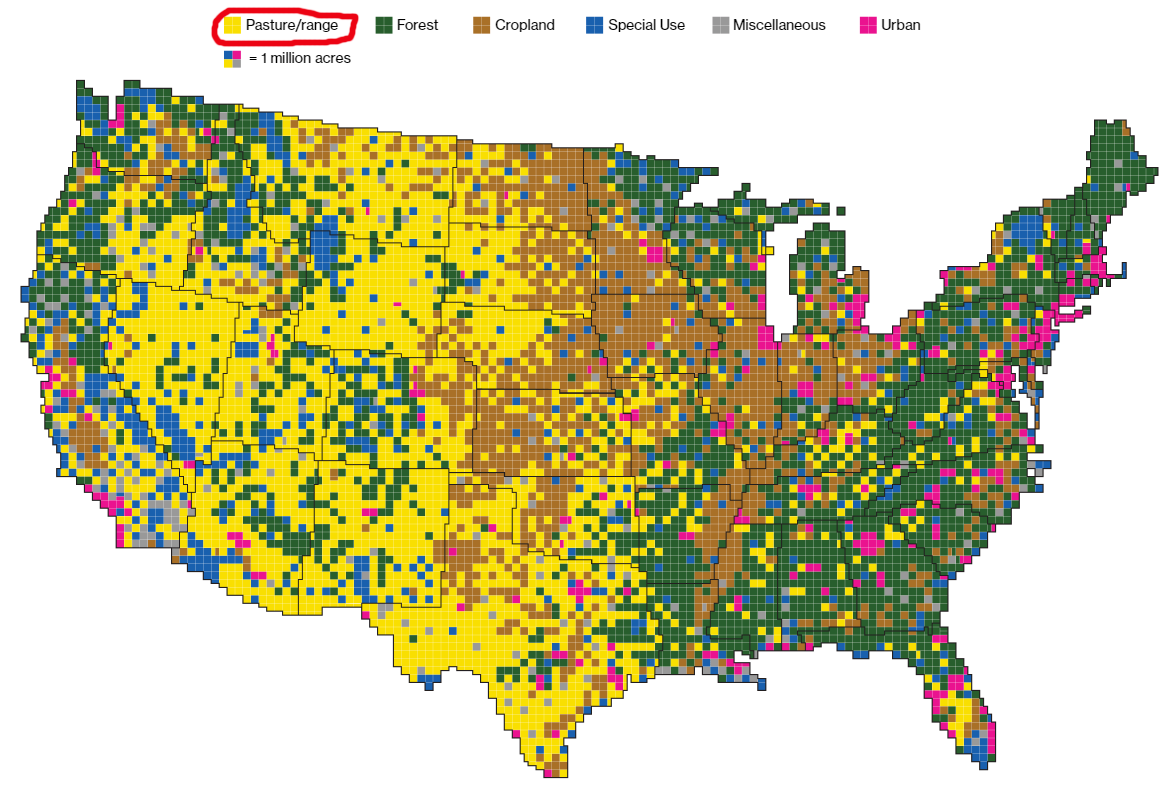 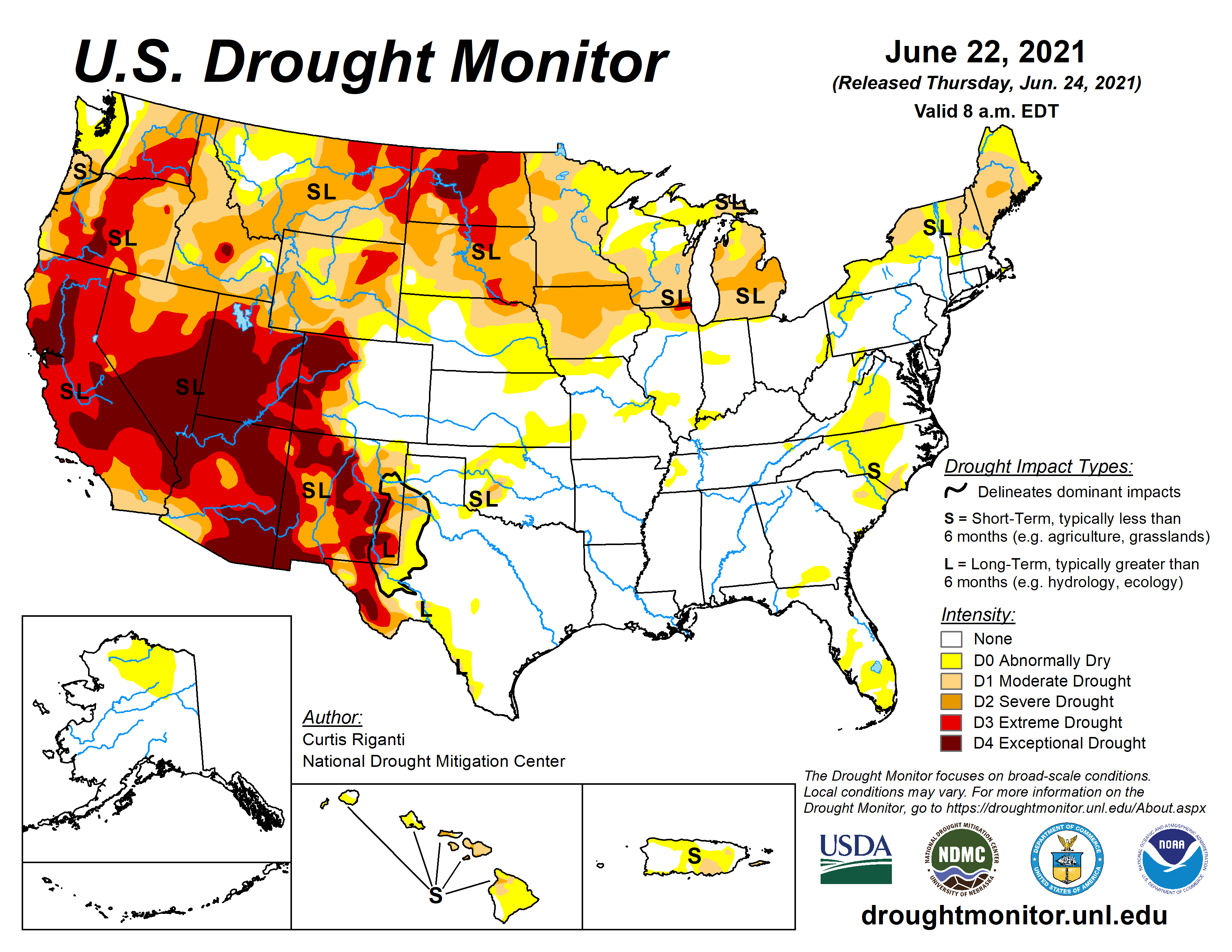 The following is a collection of articles to consider from March through June and one video report about ranchers being forced to cull their livestock this year.

No easy solution on fixing cattle markets… “While packers are making ‘unbelievable profits,’ cattle producers are going out of business and consumers are paying double or triple at the grocery store.” – BEEF

Midwest Drought as Corn Belt Deals with Moisture Extremes… “‘For the rest of June and on into the rest of the summer, I’m not seeing a whole lot of relief coming in the way of the far upper Midwest and the Northern Plains,’ he says. ‘This has already taken a severe toll on spring-sown crops that are primarily grown in the North, like spring wheat and barley. We’re seeing our lowest crop conditions of the century, which is only two decades old, but still the lowest crop conditions of the century for spring wheat and for barley across the Northern Plains.’ Rippey also points out the northwestern corner of the Corn Belt shows struggling soybean and corn condition ratings, which could be a theme that continues through the summer months.” – AgWeb

“Giammona is concerned the drought isn’t limited just to Marin County or even California. The latest U.S. Drought Monitor map shows the entire southwest portion of the country in or near a state of extreme to exceptional drought. Pat Mulroy, the former GM of the Southern Nevada Water Authority told CBS News she thinks the west is at a tipping point. ‘It’s an existential issue for Arizona, for California, for Nevada,’ said Mulroy. ‘It is just that simple.’”

My guess is that the price of beef at your local grocery store or butcher has found a base price after mitigating problems in the supply chain due to the pandemic and recent ransomware attacks. Although, as the drought continues and livestock are culled, relocated, or sent to early slaughter, the price per pound will remain stable due to a glut, but a price spike will occur in the near future due to a lowered supply. There are not many options in the retail stock market that provide decent liquidity to invest in, so this technical analysis is probably more geared toward futures traders.

COW is a new ETF since 2017 that tracks an index of lean hog and live cattle commodity futures contracts. The volume is generally thin, but it does increase with volatility. To view a larger version of a chart below, right-click on it and choose your “view image” option. 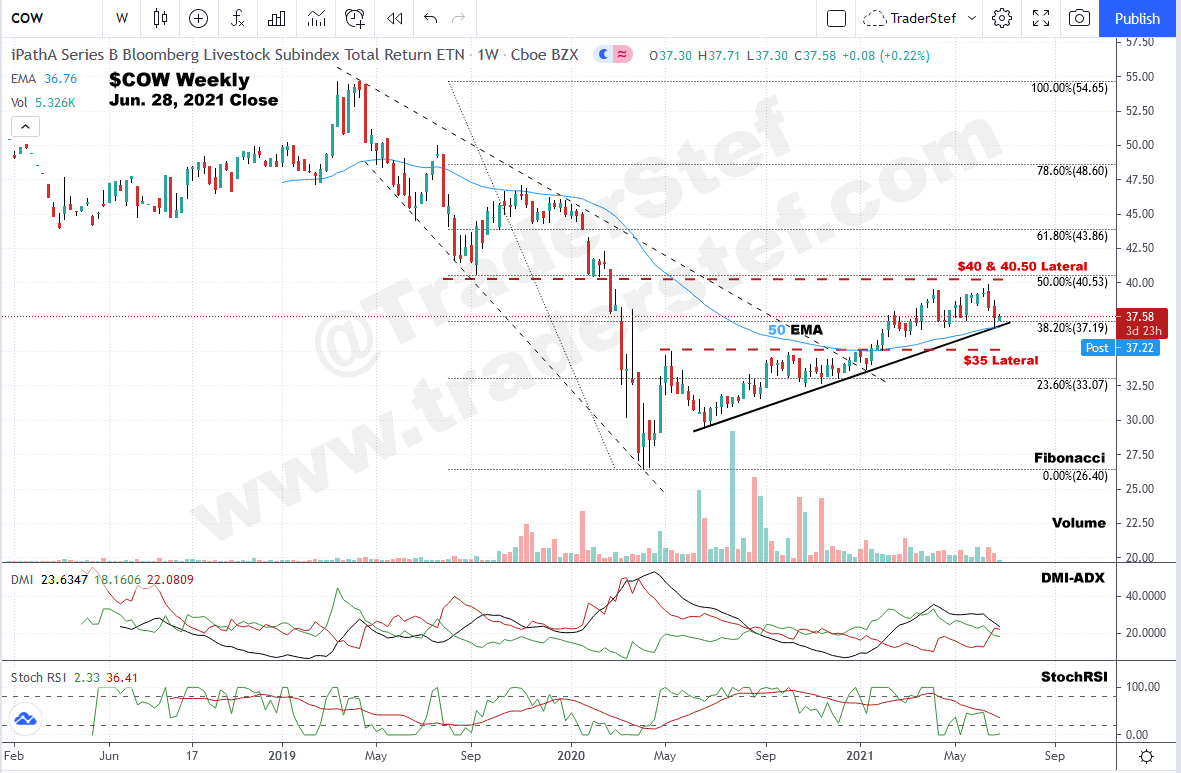 What stands out on COW and the Futures charts that follow is the current price action sitting just below a significant lateral resistance. On COW, that resistance is between $40 and $40.50 which includes the Fibonacci 50% level and a lateral drawn back to the 2020 low. The first level of support rests at $35. The DMI-ADX is unremarkable, the StochRSI is oversold, and the price action has been trending above the 50 Exponential Moving Average (EMA) after $35 was taken out in Jan. 2021. The price action will likely remain choppy until the Futures breach or fail their respective resistance levels.

Feeder Cattle Futures: next continuous contract as of Jun. 28, 2021 Close… 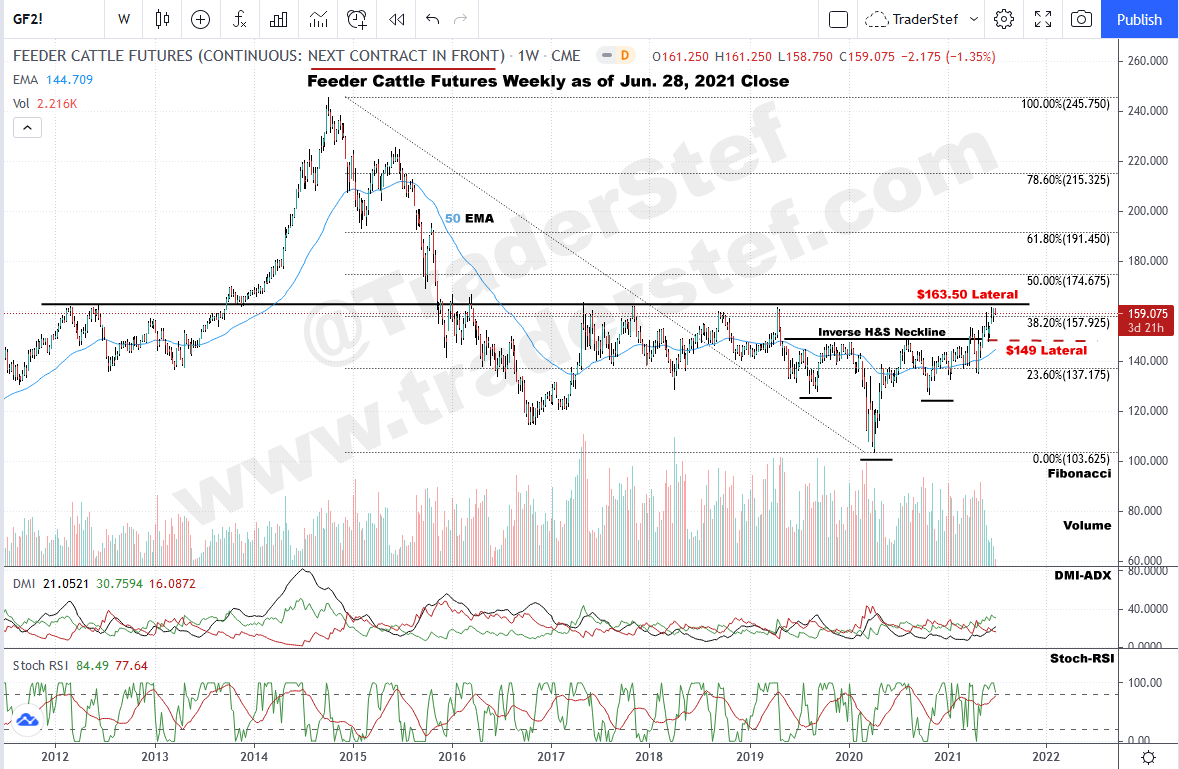 The Feeder chart has a longer history to apply reliable analysis. The overhead resistance at $163.50 is drawn back to 2012 and sits just above the 38.2% Fibonacci at $158 and Inverse Head ‘n Shoulder Neckline support at $149. The DMI-ADX is working on a bullish Alligator Tongue setup with price action above the 50 EMA, but the StochRSI appears to be long in the tooth near-term. Note the divergence of falling buy Volumes as the price rallied from $149, which is not indicative of an imminent rally. There will likely be a period of chop before any attempt is made at decisively taking out $163.50. If it breaches resistance on strength in both price and Volume, there is no significant resistance until the 78.6% Fibonacci level around $191.

Live Cattle Futures: next continuous contract as of Jun. 28, 2021 Close… 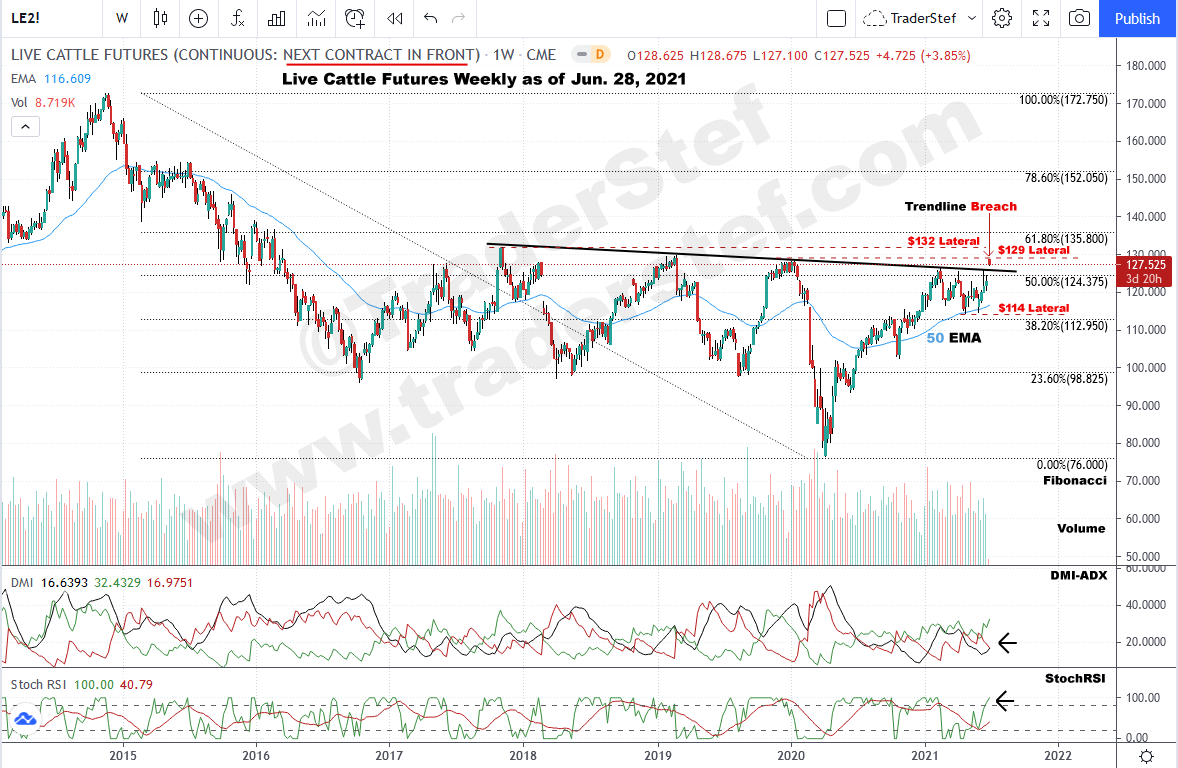 Live Cattle looks slightly different with overhead resistance along a downward trendline drawn back to the 2017 high. The DMI-ADX Alligator Tongue is in better shape than the Feeders, the StochRSI is indicative a potential rally in the near future, and the price is trending above the 50 EMA. Today’s price action breached that topside trendline without conviction and take note of the three overhead lateral bus stops at $129, $132, and the 61.8% Fibonacci at $136. There is no significant resistance until $152 if $136 is taken out with conviction on price and Volume.

If the Feeders and Live Cattle Futures rally, they will do so in unison and take COW along for the ride.

Selling Calves at Auction – From Ranch to Market – Our Wyoming Life 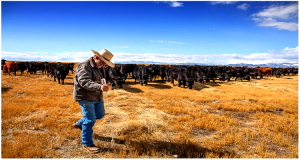