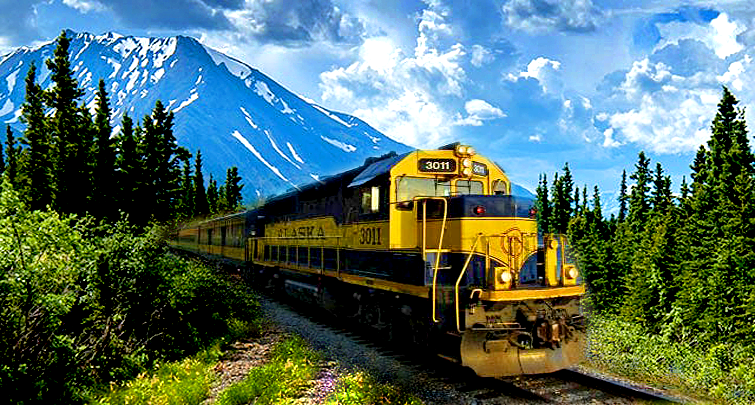 Railroads hold a special place in United States history since they enabled easy access across uncharted territory for passenger travel, trade, commerce, and eventually connected the east and west coast. The only spark of economic growth that equates to the U.S. transcontinental railroad was the building of interstate superhighways during the “greatest decade” from 1956-1966 via the Federal-Aid Highway Act.

There are numerous railway routes in the U.S., Alaska, and Canadian territories, but none are interconnected through Northwest Canada to Alaska. Construction of the 121-year-old idea for an intercontinental passenger and cargo railway linking the 49th state to the continent’s rail network is happening with the Alaska to Alberta Railway (A2A) project. The A2A railway will connect to the 656-mile Alaska Railroad southeast of Fairbanks, from Fort McMurray and Edmonton in the heart of Alberta’s oil sands where railway connections into the U.S. interior are available. If anyone in the twenty-first century truly understands the value of real assets like infrastructure and utilities, that would be Warren Buffett’s portfolio and his $44 billion purchase in 2009 of the Burlington Northern Santa Fe (BNSF) Railway, which is the largest freight railroad network in North America. 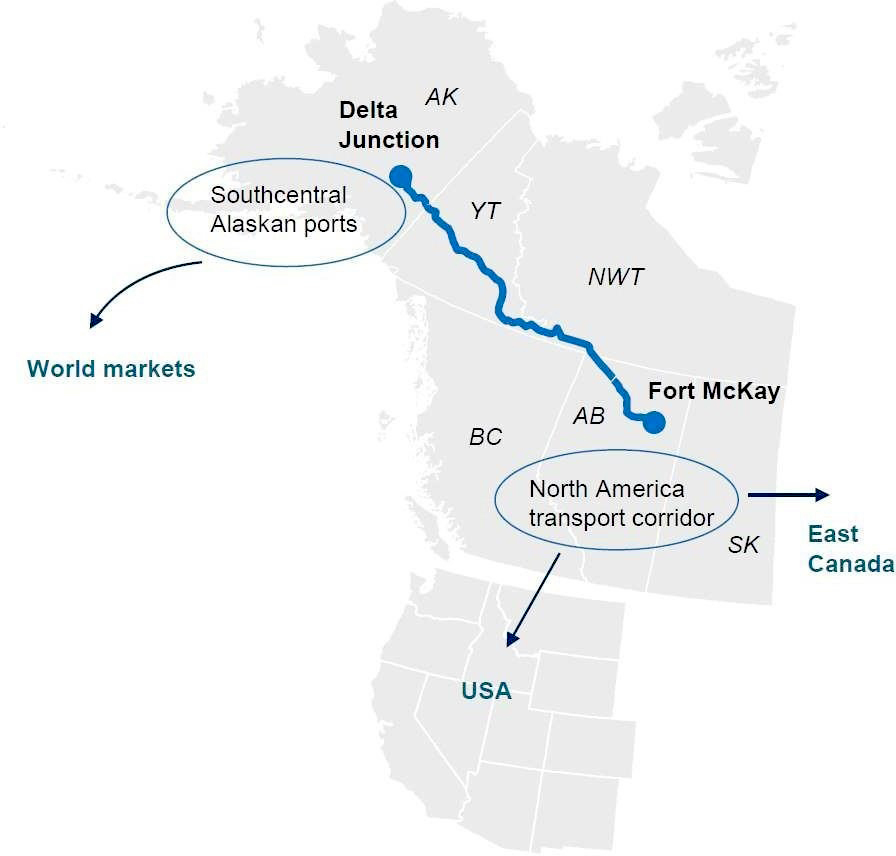 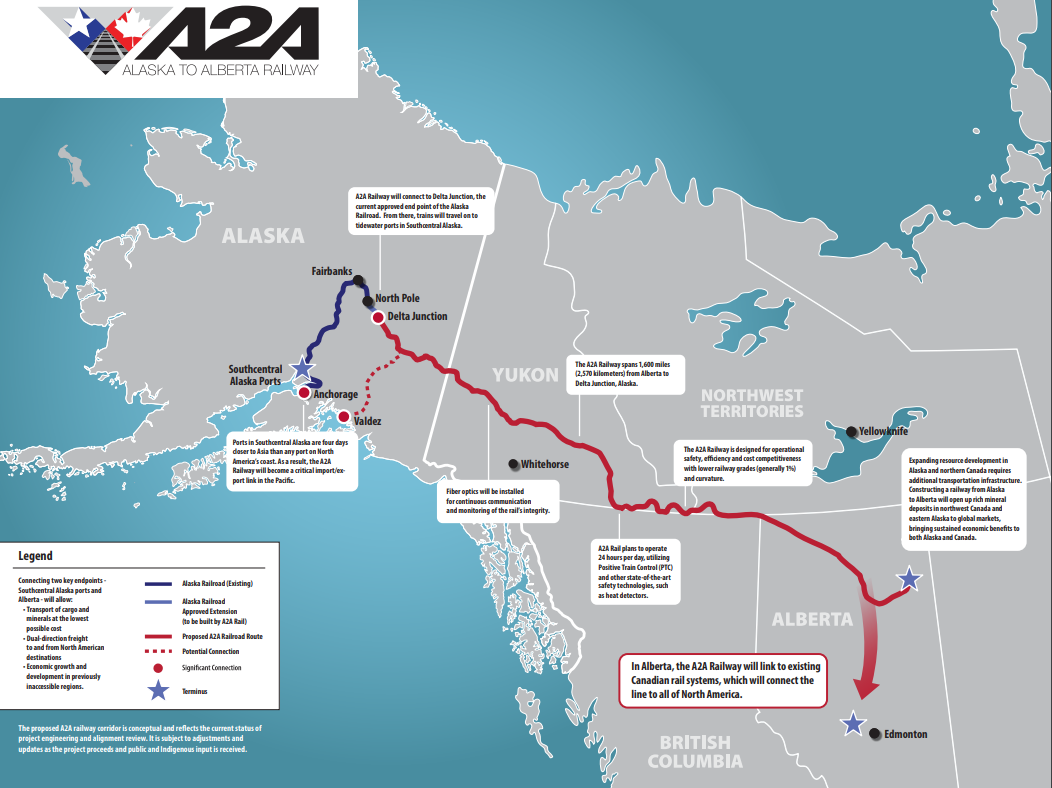 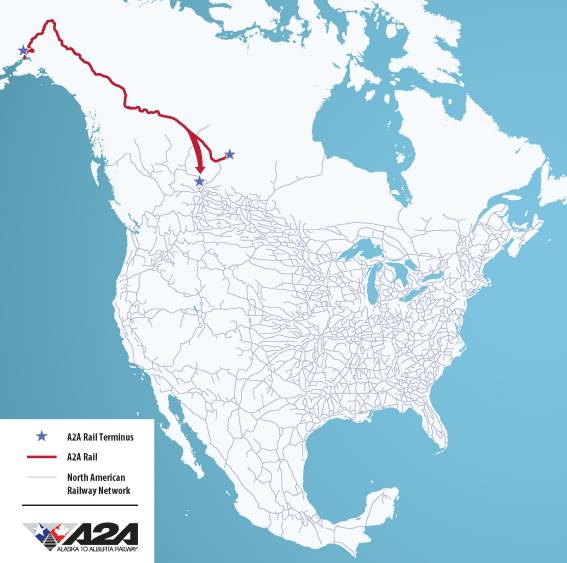 The A2A railway will extend U.S. access to Alberta’s landlocked energy resources and provide Pacific shipping lines with alternative ports and reduced transport time for petroleum and a variety of consumables. It will also provide oil and gas producers with a means of transportation as several pipeline projects that link isolated areas to the west coast are delayed, along with the Biden administration’s construction permit revocation for the Keystone XL pipeline. The 1,600-mile railway will fuel economic growth throughout the region and benefit both Canada and the U.S.

“A2A Rail will provide critical infrastructure connecting North America to global markets through safe and efficient transport of commodities, containers, natural resources and people… We seek to build a railway that serves the people along the route and that builds long-term prosperity, high quality employment and collective opportunity. As an organization, A2A Rail is particularly eager to support the aspirations and well-being targets of the Indigenous peoples and communities of the Northwest.” – A2A

Permit in Hand, Entrepreneur Advances Alaska-Alberta Railway… “‘You’ve got vast quantities of people living up north well below the poverty line,’ McCoshen said. ‘I’m shocked that this hasn’t been done already.’U.S. President Donald Trump granted a presidential permiton Sept. 28, two days after tweeting that he planned to green-light the cross-border project. ‘We know we have tremendous support from all political parties in the United States’ along with parties in Alaska, local governments in Alberta, Northwest Territories and Yukon, McCoshen said.” –Bloomberg, Sep. 2020

Indigenous Sustainable Investment Conference Hosts a Discussion on Indigenous Inclusion in ESG Standards… “The First Nations Major Projects Coalition (FNMPC) will host the conference on March 18 and 19, 2021, featuring a keynote address by Mark Carney and Chief Terry Paul.  Presented by LiUNA and co-hosted by JP Gladu, President of A2A Rail and Mark Podlasly, Director of Economic Policy for FNMPC… This conference is a first-of-its-kind event where we are bringing Indigenous leadership together with government and the private sector for a discussion on what is needed to advance sustainable investment practices in Canada…The future of Canada’s economy is dependent on the ability to unlock the Indigenous economy. This can be accomplished by recognizing and supporting capital investments and inclusive policies, and ensuring our people have a seat at the governance table as projects get developed and operationalized.” – Globe Newswire

It is also important to recognize that the Yukon does not have access to rail networks and freight must be trucked or flown in. A railway that transverses the Yukon would be a game-changer and the most significant positive economic impact the region may ever experience. If you consider the amount of mining that takes place in the Yukon and Northwest regions that would gain access to a more affordable transportation network, tourism potential, real estate, homesteaders, and a plethora of opportunities, the possibilities are mindblowing for Canada, Alaska, and investors from the lower 48.

A lesser-known variable occurred on Mar. 21 of this year, when two of North America’s largest railroad companies announced an agreement that will connect freight customers to Canada, the United States, and Mexico on a single network for the first time in history. Canadian Pacific ($CP) is seeking to acquire Kansas City Southern ($KSU) in a megamerger deal worth $29 billion that is slated for approval by the U.S. Surface Transportation Board in mid-2022. That is all big news for A2A in Alaska and Canada’s Northwest because it creates the opportunity for an even larger transcontinental market.

Railroad megamerger could be boon for shippers… “The merger would connect customers with six of the seven largest metropolitan regions in North America, potentially reduce transit times and provide new product offerings, such as a possible new intermodal service between Dallas and Chicago, executives said. The merger would also enable north-south customers to avoid congestion-prone Chicago via CP’s network in Iowa.” – Freight Waves, Mar. 21 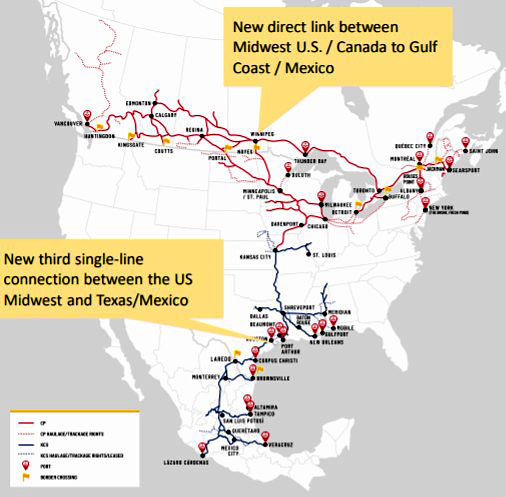 The stock price for Canadian Pacific did not experience the same spike as Kansas City Southern after the merger announcement last week. 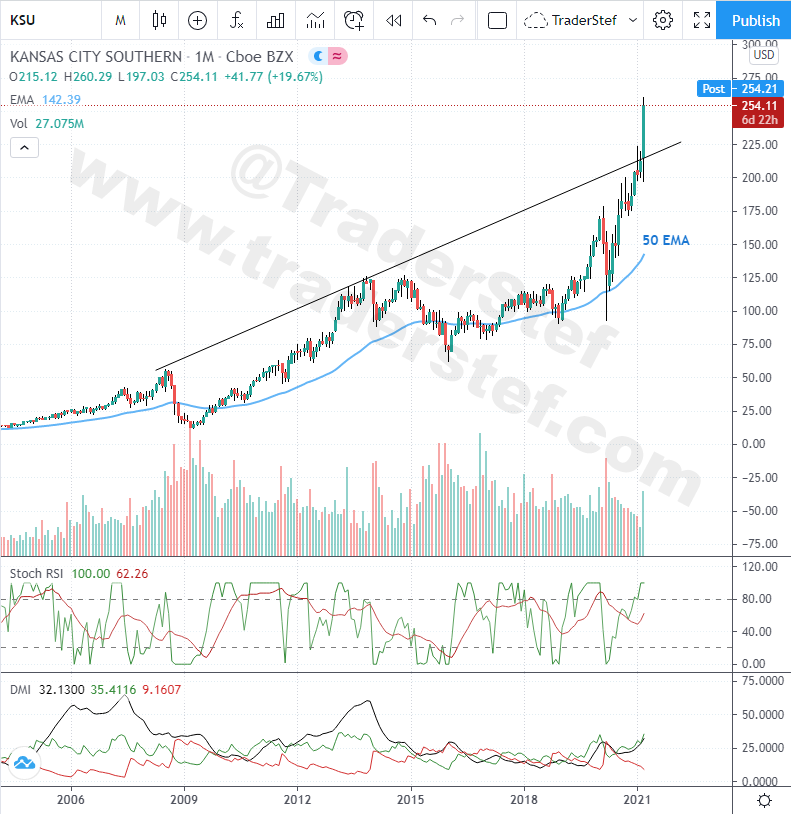 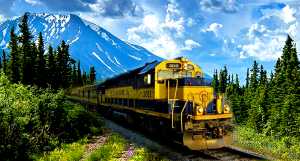