A Watch List for Trading the Chip Addiction – Part 2

The just-in-time (JIT) supply chain that sustains the world’s addiction to semiconductors (chips or microchips) for electronic goods dipped further into the abyss last week as China ordered power cuts that shut down a broad swath of mainland electronics manufacturing and their associated chip fabricating facilities (FABs). Beijing’s reason for executing the current blip in the matrix is a surge in the cost of energy/electricity production. Just two weeks ago, the Chinese Ministry of Industry and Information Technology (MIIT) was preening journos with chip shortage severity bylines and seeking ways to mitigate the problem.

Chip shortage will drag on ‘for some time’, Chinese ministry warns, as country looks to boost semiconductor support… “‘The chip supply chain will remain tight for some time, and the current problem is still quite serious’… The ministry has pushed for some domestic and foreign companies to resume production to ensure the availability of certain types of chips that are in extremely short supply… MIIT blamed the Covid-19 pandemic for slowing the expansion of chip manufacturing capacity… Since the automotive industry has been especially hard hit, the MIIT set up a team to help better bridge the gap between supply from chip manufacturers and demand from carmakers… The semiconductor industry’s just-in-time (JIT) inventory strategy – a practice used to keep costs low by reducing the risk of excess supply – has resulted in severe production halts. Despite chip makers’ efforts to ramp up capacity to meet soaring demand, the current shortage lingers because expanding chip production takes at least six to 12 months for plans to become operational.” – SCMP, Sep. 13

Aside from China’s electronics industry, its mining, coal, and steel production recently took a financial hit that will challenge their largest manufacturers in the coming months that are typically the busiest time of the year. Early Christmas shopping for electronics in the West might not be a bad idea because the ongoing “Shipping and Supply Chain Crisis Will Not End Anytime Soon” (Twitter thread). Not to mention, geopolitical tensions continue to rise between Western powers and China’s preferred ownership of Taiwan and the South China Sea region.

China’s clampdown on energy consumption is multifaceted and may include a politically nefarious variable, but the chart for coal futures and natural gas tells the dominant story. China is the second-largest importer of liquified natural gas (LNG) on the planet behind Japan, and trading had bid up prices as Europe and Asia compete for scarce shipments. The current LNG futures delivery contract for Japan and South Korea has nearly doubled from $15.46 to $29.18 since Aug. 2021. 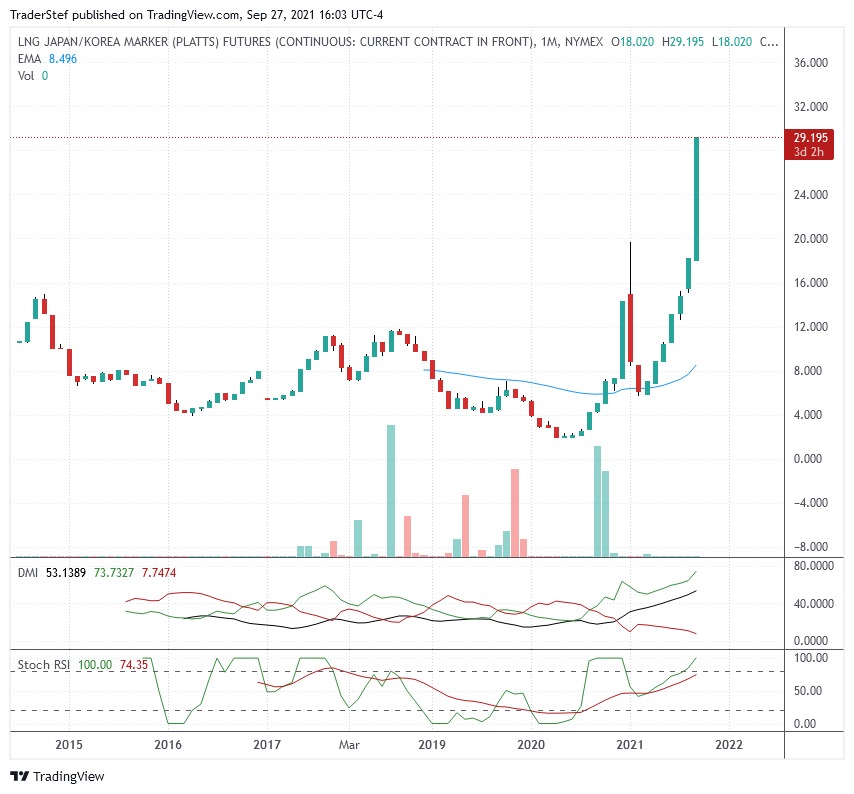 Meanwhile, pundits and media outlets are talking up a China storm while the U.K. and Europe are facing their own energy crisis. As of today, Britain put their military on standby because the plebe’s panic buying has pumped gas stations dry across the entire country.

“Northeast China‘s Shenyang, capital of Liaoning Province has been through a sudden and unexpected power curb. Meanwhile, dozens of provinces across the country are also facing power curb due to govt’s pursuit to cut carbon emission even though the supply for coal remain adequate.” – Source Beijing, Sep. 26

Why Is China Tightening Grip On Energy?… “A combination of reasons — including surging coal and natural gas prices and Beijing’s efforts to cut emissions — has pushed China to enforce a crackdown on energy consumption, in turn, further risking the global tech and automotive supply chain.” – Newsbreak, Sep. 27

Power curbs disrupt production of electronic plants… “Ma Jihua, a veteran industry analyst, told the Global Times on Monday that there are many uncertainties involved in the current power situation. ‘Nobody in the industry has any idea about whether future power curbs will be periodic, intermittent or regional, so it’s hard to say how it will affect various parts of the industry chain.’” – China Global Times

Key Apple, Tesla suppliers halt production amid China power crunch…“Several key Apple and Tesla suppliers have halted production at some of their Chinese facilities to comply with Beijing’s tighter energy consumption policy, putting supply-chain continuity at risk during a peak season for electronics goods including the latest iPhones. Eson Precision Engineering, an affiliate of Foxconn — the world’s biggest iPhone assembler — and a key mechanical parts supplier for Apple and Tesla, on Sunday said it suspended its production facilities in the Chinese city of Kunshan in direct response to the city’s policy of stopping electricity supply for industrial use… It comes at a time when global markets have been shaken by the debt crisis engulfing China Evergrande Group, one of the country’s leading property developers… Several key chip packaging and testing service providers supplying Intel, Nvidia, and Qualcomm also received notices to suspend production at their facilities in Jiangsu… further waylaying an electronics industry hit by the chip supply crunch.” – NikkeiAsia

I published Part 1 on May 25, 2021, and opined on the initial issues that initiated the semiconductor supply chain crunch. There were additional disruptions throughout the summer before Beijing decided to cut power to manufacturing facilities last week. Here is an excerpt on the situation last spring:

“The global semiconductor shortage has governments and the companies that fabricate chips and the machinery to build them racing to expand capacity to meet demand while staying ahead of technological advances (Moore’s Law). Some companies only design chips, while others manufacture them or create the machinery that’s needed to fabricate them. To help the United States break away from its reliance on foreign manufacturing, the U.S. Senate has proposed billions to dramatically boost the domestic semiconductor research and production industry over the next five years. President Trump already had the ball rolling with increased funding and a deal for a new manufacturing plant on U.S. soil… That little chip has evolved from a small workhorse inside computers to the most important and expensive element within our modern-day gadgetry. After the explosion in demand over several decades, an unexpected spike across many industries occurred during the pandemic that created an unprecedented supply shock and precipitated the current shortage… There are only three major FABs (fabricating facilities) in the world today, with two of them located in Asia and one in the U.S. at Intel. The ongoing pandemic harshly brought to light the fragility of global supply chains since the U.S. is 88% dependent upon foreign FABs. The largest supplier and most advanced FAB is located in Taiwan at Taiwan Semiconductor Manufacturing ($TSM).” – TraderStef

The U.S. Dow and the S&P 500 indices squeezed by today with a 0.21% and 0.28% gain, respectively, the Russel tacked on a healthy 1.4%, but the technology-weighted Nasdaq index experienced a 1% decline. That was a departure from the Nasdaq’s usual performance throughout the pandemic, as work life for millions shifted from an office building cubicle to homebound Zooming and remote access in pajamas. China cannot afford to cut back power to its manufacturing industries too much for too long, but this weekend’s matrix blip did have an impact on the technology darlings of the early 21st century.

Let’s close up shop tonight with a brief overview of who runs the semiconductor industry and which stocks are available to trade the volatility in Western exchanges.

Peruse a detailed list of FABs and keep the following watchlist of semiconductor industry stocks that were included in Part 1. By the way, one of those companies just announced a huge expansion in Oregon.

Amid Global Semiconductor Shortage, Equipment Supplier Opens Second Oregon Plant… “Amid a global shortage of semiconductors, a supplier of equipment used to manufacture them is making a major facility investment. Lam Research Corp., a Silicon Valley manufacturer of chip production equipment, said Sept. 9 that it plans to open a new factory in Sherwood, Oregon, in December. It will be the fifth production facility in the U.S. for the Fremont, California-based company and will span 45,000 square-feet.” – Thomas Publishing, Sep. 27