Disclaimer: I’m indifferent about Bitcoin and currently have no positions.  The focus of this post is to view Bitcoin and other Crypto-currencies as any other investment or trade, to not be caught up in emotions, ego, fear, herd mentality, top or bottom calling, bubble blowing or engage in industry happy talk.

Despite a disruptive new variable within the modern electronic trading environment we work in, fundamentals, human nature and mercantile sense remain as relevant as they were when Livermore mastered his skills.  However, market infrastructures and their complexity have changed.  The newcomer is Algorithms (Algos) & High Frequency Trading (HFT) platforms programmed by ‘Quants‘ that blend mathematics, finance and computer programming skills to incorporate a plethora of emerging trend and technical indicators that have been fine tuned over decades by seasoned Traders’.

Price flows have become increasingly volatile, asset rotations more pronounced, and intraday Flash Crashes  (Flash Boys book by Michael Lewis) on individual equities happen almost daily.  When those factors multiply across an exchange, we experience a day like May 6, 2010.  Eric Scott Hunsader has an analysis of that day, and was vindicated  by the SEC as a Whistleblower, based on information he originally discovered about the 2010 Flash Crash.

Whether you’re scalping, swinging, laddering or holding short & long term core positions, one must adapt to a ‘Jack be nimble Jack be quick’ mentality and realize you’re being robbed and bumped off the front of the line.  A human cannot manually compete with micro-second speed & volume.  What can be done is recognize the new variable with information and charts to enable informed investment decisions.  If you’re not well read on Algos & HFT, I suggest you do due-diligence on the following two bullet points before continuing along this post.

I contacted Joe this past weekend…  Q: Bitcoin HFT-Algos, how prevalent given the recent run & plunge?

“My problem with Bitcoin is that it trades on unregulated exchanges.  This was the reason the SEC gave for not approving the Bitcoin ETF.   As far as I know, there are no Bitcoin market makers that have an obligation to make a market.  This is the reason why I think you have seen some violent price gaps recently.  There is no inventory buffer that a traditional market maker would supply.

Same thing happens when stocks flash crash. Electronic market makers, who have very light obligations, just get out of the way when they see heavy pressure building in a stock. Eventually, the stock reverts but not before many stop loss orders get activated and get abused.

Until the underlying exchanges are regulated more strictly, I think Bitcoin trading will continue to be the Wild West of trading.” 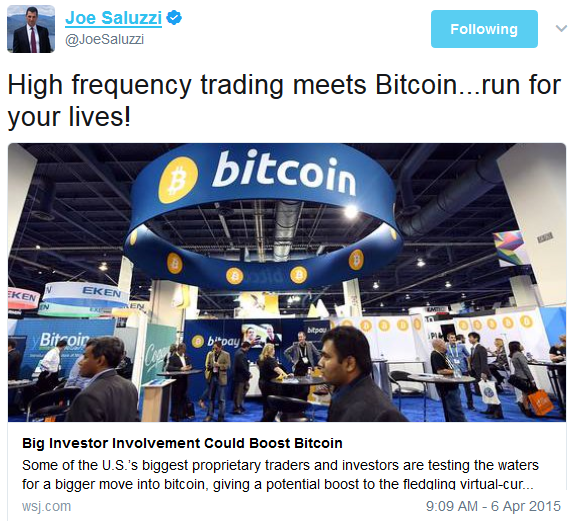 Ok, now that we’re on the same page, let’s venture down the rabbit hole…

High-Speed Traders Are Taking Over Bitcoin

“Zhou, a 35-year-old high-speed trader in Beijing, Bitcoin is also too good to resist. His computers trade it 24 hours a day, seven days a week. Using lightning quick orders, they profit from tiny price discrepancies on the myriad venues where it changes hands. “It’s the golden age to be in the Bitcoin market, because it’s imperfect,” said Zhou, a former IBM technology consultant whose firm, Fintech Blockchain Group, runs a Bitcoin hedge fund and venture capital fund… “If the market is here and I can see a chance to make money, I will,” Zhou said. “If the market is gone, I’ll just walk away.”

“If you Google HFT in Bitcoin one of the first results will be an old Quora thread that talks about HFT being impossible in Bitcoin because a Bitcoin transaction last long. That’s clearly bullshit… Another argument was liquidity. That is true on some exchanges for scalping algorithms. Scalping is a very short term trading… On Chinese exchanges none of this is an issue: trades tend to be free or very cheap and volume is largely artificial thanks to volume bots that run on behalf of the house…”

“Trading bots are rather common in the Bitcoin world, as very few traders have time to stare at the charts all day. Most people trade Bitcoin as a way to generate passive income while working their regular day jobs. With so many people relying on trading bots, the question becomes which one can be trusted and which one should be avoided”

“Crypto-currencies, treated as an asset, are interesting markets and have significant profit potential for well constructed algorithmic trading. Separately, the technology underlying the Blockchain enables trustless transactions and fully accountable transaction. We have extensive experience with both trading crypto as an asset and working with Blockchain as a ledger system.”

Before we review my Bitcoin charts, you may ask, why Bitfinex?   VOLUME last 30 days via BitCoinity. 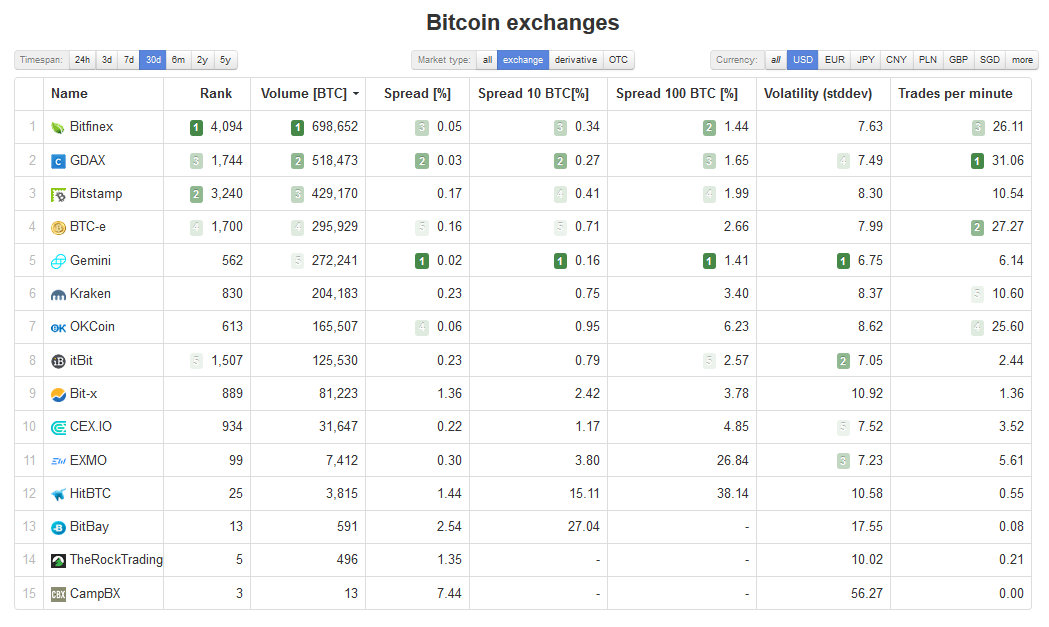 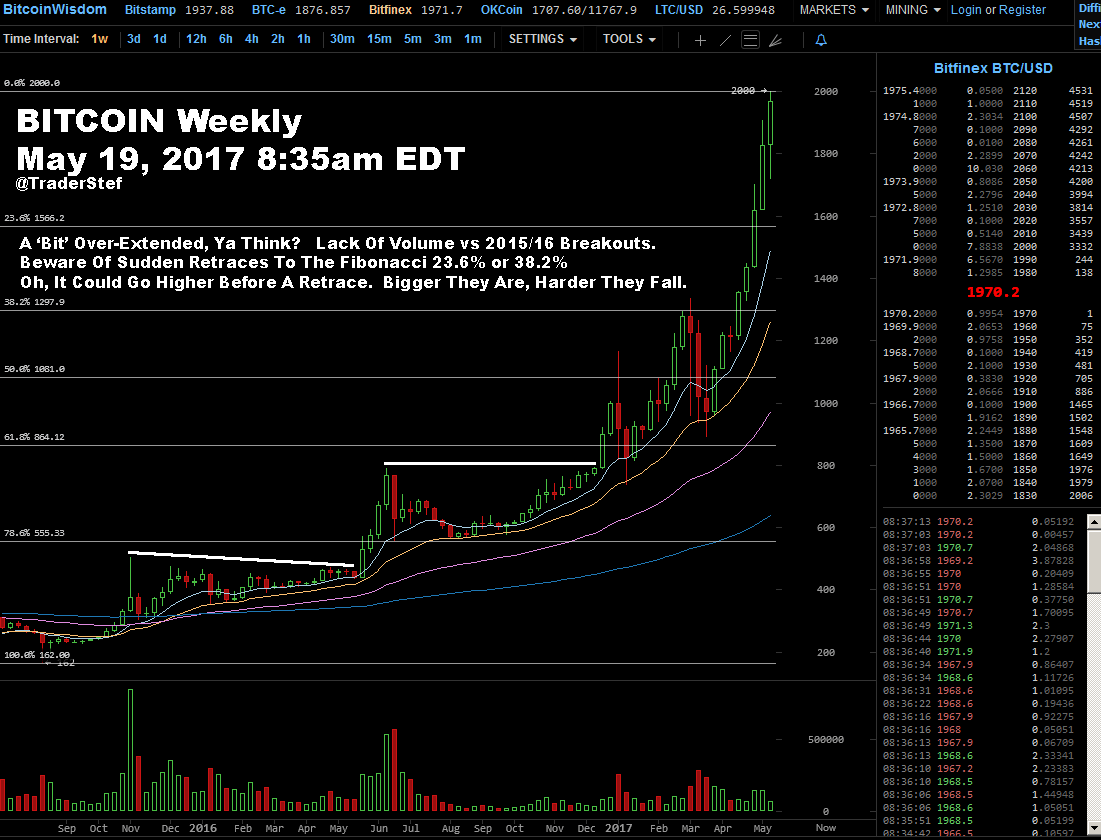 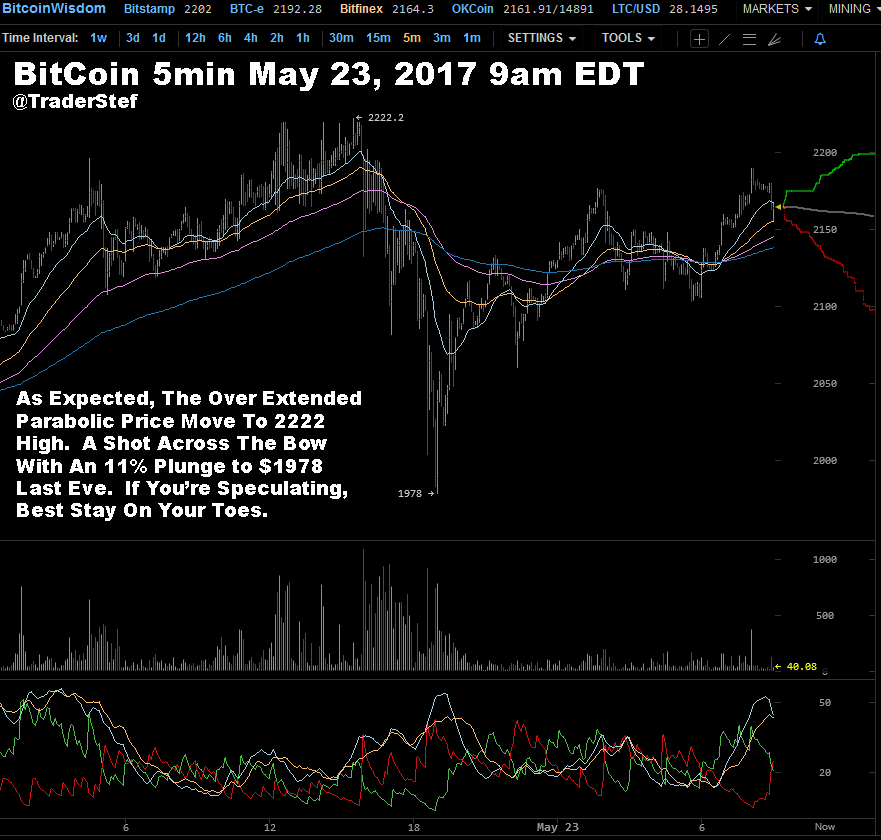 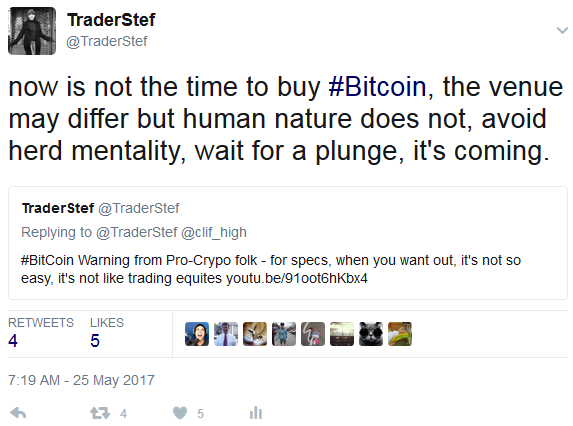 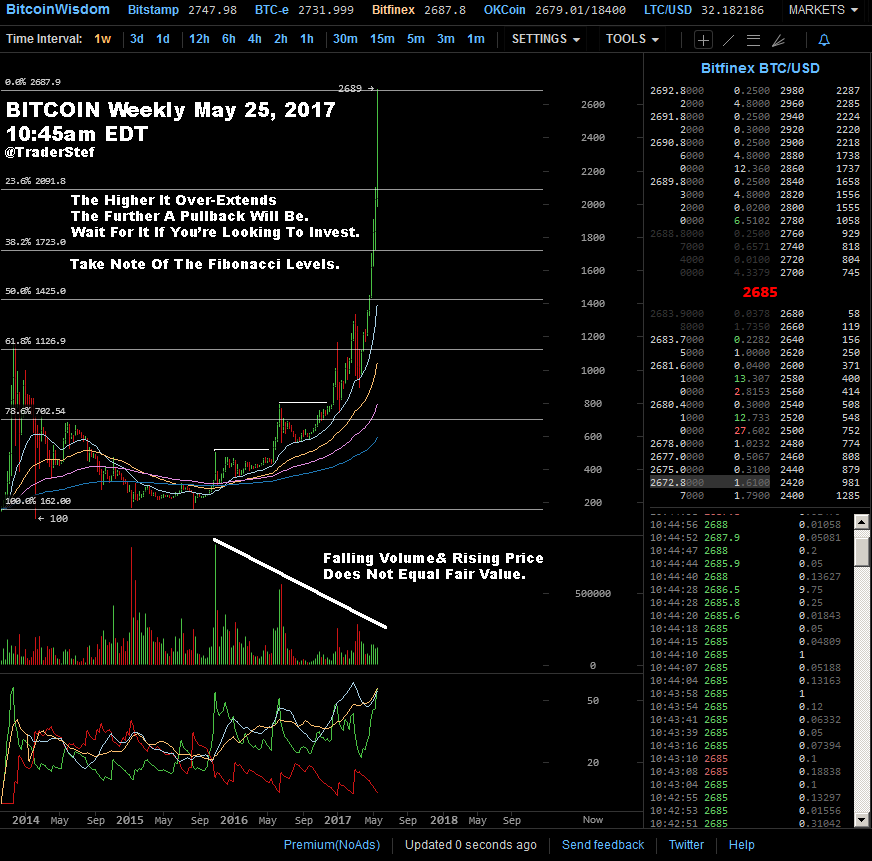 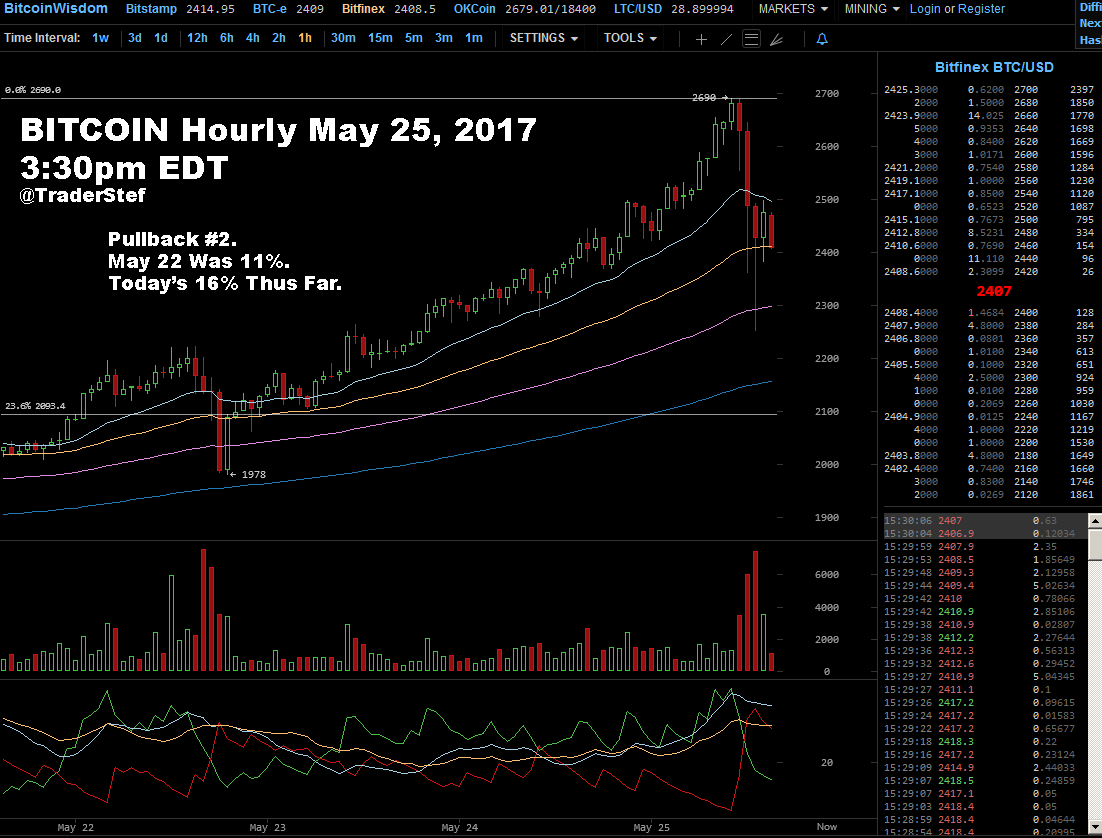 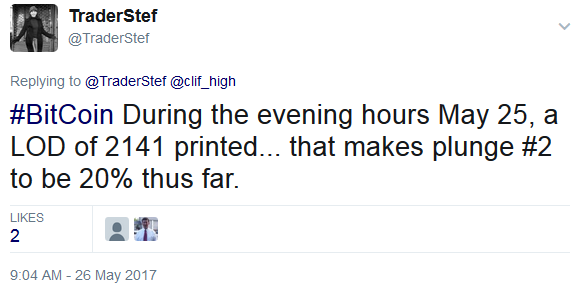 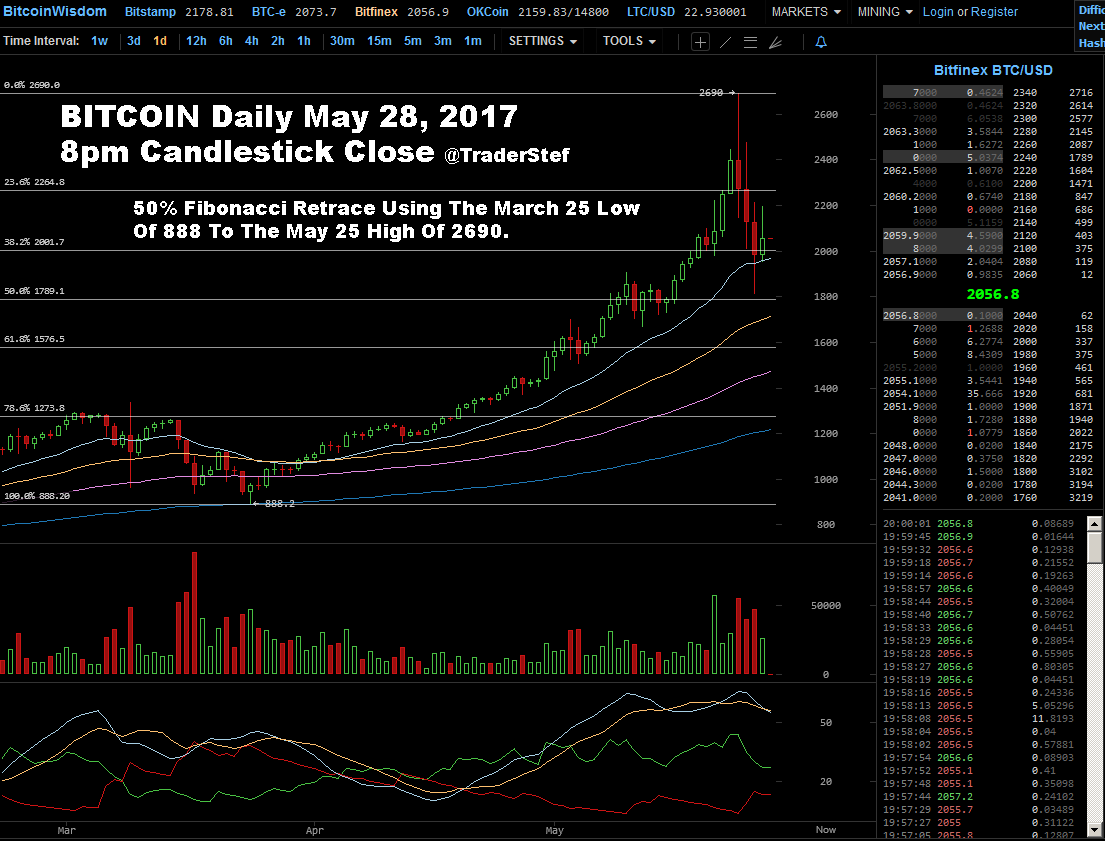 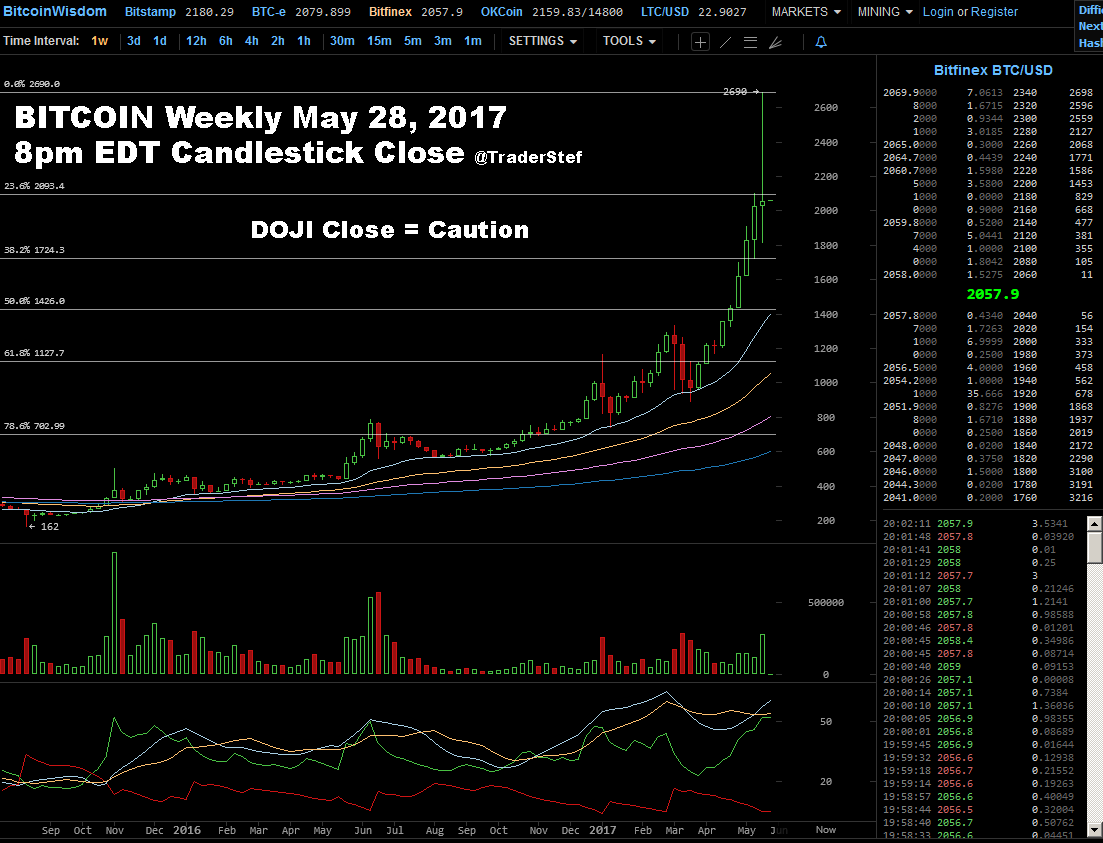 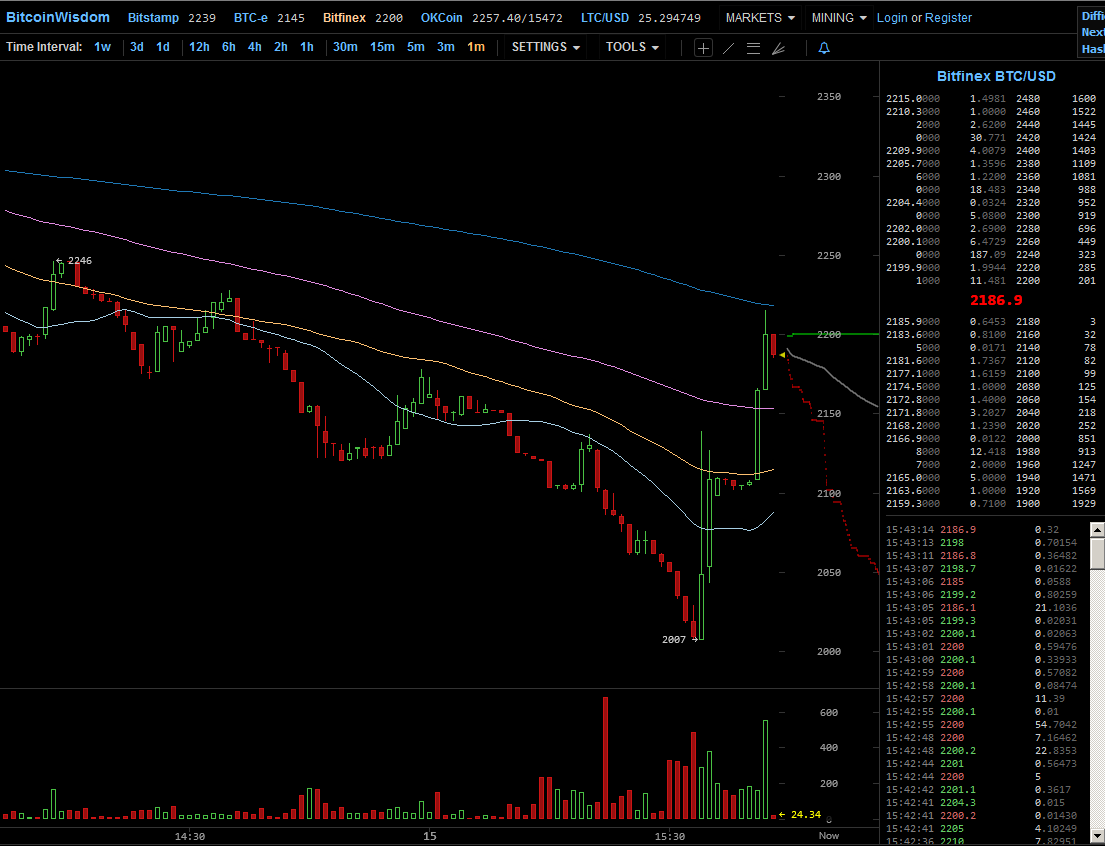 It’s obvious the machines rule in Bitcoin.  In this short post it’s not possible to convey all the details and knowledge necessary to ‘win’, nor do I possess it all.  For the Scalper, I suggest sticking with Sweetspot opportunities.  For the Swinger or Investor seeking core positions, wait for plunges to add.  If you think you’ll pick the bottoms and tops 100%, you’re dreaming and in the wrong business.  If you’re a Trader or Investor that was seeking a position but were too busy over the holiday weekend stuffing your face with grilled hot dogs & beer instead of doing due diligence, you missed out on a rare opportunity.  If you think you missed the boat because you didn’t buy near this recent spike as well meaning industry folks were screaming to buy Bitcoin NOW, I can’t help you.

You can go here  and review a Twitter thread where I’ve published Bitcoin Technical Analysis charts since the November 2015 breakout.