Legacy news headlines this summer have been filled with reports of extreme drought conditions in many areas around the world, especially in the United States where “Severe Drought is Forcing the Extraordinary Slaughter of Cattle” in the western plains and southwest region of the country (see U.S. Drought Monitor). Due to the rally in water-related stocks since mid-June and the ongoing drought and drinking water supply issues, water stocks appear primed to recapture all-time highs in the near term and could rally higher in the future.

After publishing Part 1 of “Investing in the Fresh Drinking Water Crisis” in May 2018, the top five water ETFs experienced a brief 15% price correction four months later and rallied 50% higher until the winter of 2020. During the initial pandemic panic in the spring of 2020, the sector pulled back 30% in lockstep with stock market turmoil but pivoted upwards for a huge 135% gain until January 2022. Another 30% correction coincided with this year’s stock market bear until mid-June, then water ETFs retraced 50% of that drawback as of last week, and company-specific equities are pivoting upwards or spiking (like $ARTNA) to all-time highs.

The doom and gloom associated with a majority of legacy journalism that reports on climate-related issues typically overstated the “greenhouse effect” and “global warming” in the ‘80s and ‘90s and then morphed into a climate change narrative about two decades ago. That narrative is being used by governments and corporate interests to advance numerous agendas that include “The EV Swindle” I wrote about last week. Weeding through mainstream media requires discernment, and one source that helps understand the real science behind the climate that’s always changing vs. political science is Clintel.org, where the climate emergency is put to rest.

Dealing with climate-related issues on a regional level is more constructive than expecting a government to save the Earth that managed to survive on its own for an estimated 4.5 billion years. When assessing what’s taking place in parts of Europe that are experiencing a severe drought this year, you’ll often find that water supply issues are often attributed to the poor management of resources and infrastructure. A case in point is the U.K., where restrictions on water usage are being implemented and bottled water is now rationed at retail outlets. The underlying issue is the water infrastructure that’s been ignored for four decades that fails to accommodate a growing population.

Drought disrupts river traffic on Germany’s Rhine… “As Western Europe battles through the ongoing drought, water levels in Germany’s most important waterway, the Rhine River, could drop even further next week. The drought is causing huge disruption, with potentially massive consequences for the economy.” – DW, Aug. 2022

Thousands of homes RUN OUT of water and firms send dire texts warning of MORE shortages as swathes of UK plunge into drought …”Shops are rationing supplies to stop panic-buying.” – Daily Mail, Aug. 12 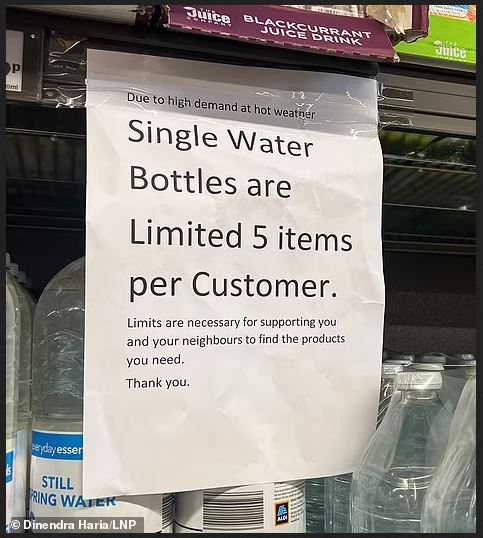 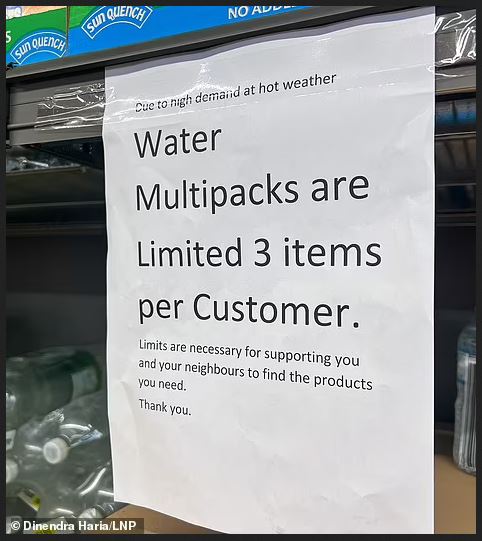 2 of 61 Slideshow Images Courtesy of the Daily Mail

Supermarket rations bottled water as drought declared across half of England… “The Aldi supermarket in Haringey, north London, put up signs telling customers they could only purchase five single water bottles each, while the limit for multi-packs was three per person… It comes as the Department for Environment, Food and Rural Affairs said more than half of England is to be moved into drought status following the driest summer in almost 50 years.” – The Telegraph, Aug. 12

Water woes: who’s to blame for UK shortages?… “No substantial reservoir has been constructed in England since the Kielder Water dam was completed in 1981. Part of the reason we have pictures of empty reservoirs today is not that we are in a worse drought than 1976, but that while demand for water has increased as the population has grown, capacity to store it has not.” – Ross Clark in The Spectator, Aug. 13

Regions in Latin America, Asia, and Africa are experiencing water scarcity that’s becoming an everyday hardship. Home to 12 of the world’s driest countries, the Middle East faces a growing water crisis that’s threatening agriculture and regional security. How are Middle East governments responding, and what more needs to be done to mitigate the effects of water scarcity?

Let’s move on to a watch list of ETFs and a few company stocks to consider in the water industry. Keep in mind that the majority have very low liquidity (under a million shares traded per day) and are not ideal for trading large lots. This sector usually trends in sync with major U.S. stock indices, but there are exceptions. The two charts provided are for informational purposes and are not stock picks.

Water ETFs traded in the U.S. via ETFdb.com… 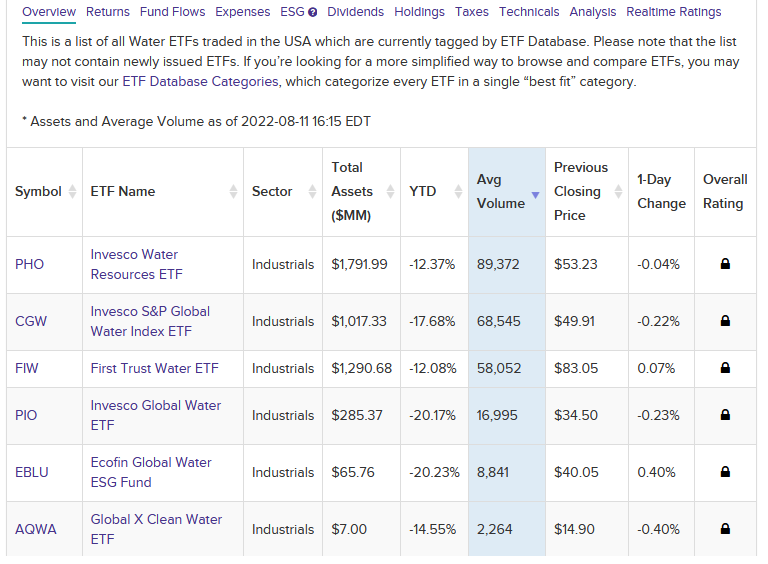 The NASDAQ OMX US Water Index tracks the performance of companies creating products that conserve and purify water for homes, businesses, and industries listed on U.S. exchanges. The index is weighted to enhance the underlying liquidity and increase the tradability of the index components. 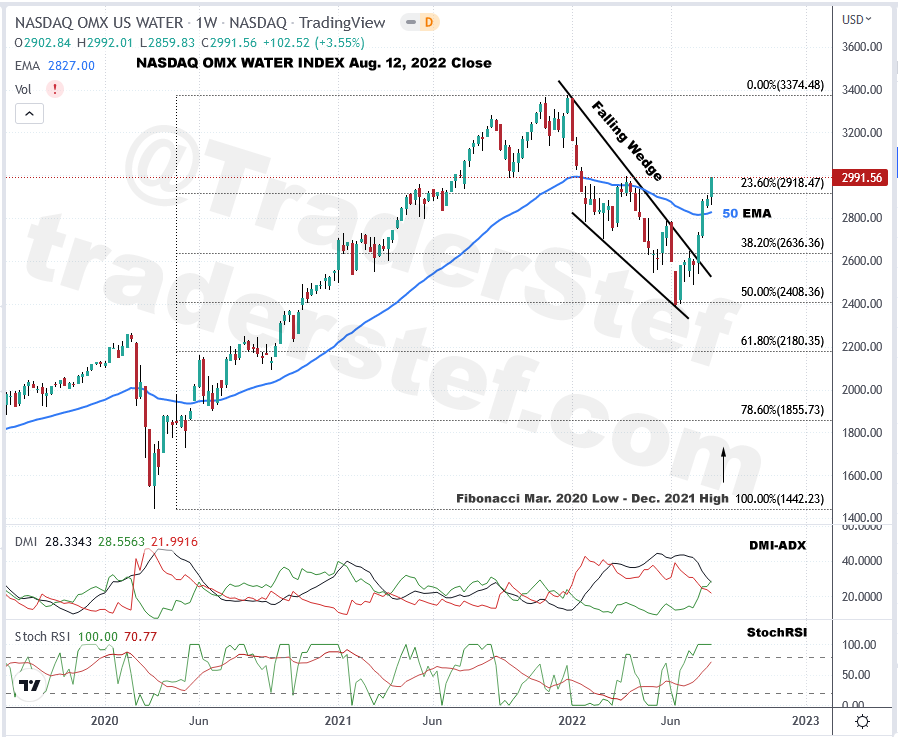 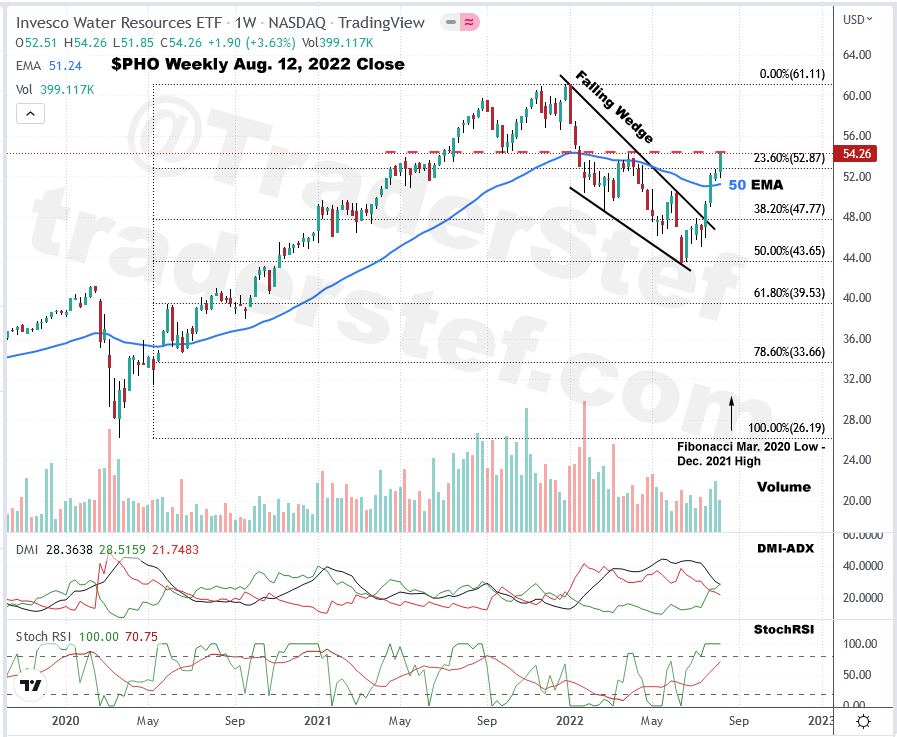