Of all the controversies and conspiracy theories regarding financial market irregularities, perhaps none receive as much attention and vitriolic indignation than the much cited gold market manipulation. As one of few commodities that is internationally recognized as an inherent store of high value, the very idea of gold manipulation strikes many as sacrilegious. After all, it was only up until the 1970s that bullion was stripped of its title of arbiter of global currency evaluation, with millions of Americans still clinging to fresh memories of a time when the dollar was backed by hard assets. However, in fairness to factual context, virtually all financial abnormalities play second fiddle to the persistent malaise of the bond market manipulation.

Bond Market is A Momentum Market

In contrast to the accusations of improprieties against the COMEX spot price of gold, silver, and other precious metals, the conspiracy of the bond market is entirely self-evident. The very definition of a central bank that controls the supply and velocity of its national currency is manipulation; therefore, no evidence gathering is required other than to acknowledge the function that forms the basis of the popular indictment. Even the euphemism “financial engineering” is a rather damning confirmation of the means by which central bankers casually conduct their daily affairs. This publicly open declaration has led a growing number of investors to consider capitalization towards funds that track the performance of various bond markets. The rationale is that predictable unpredictability is by nature predictable. And in large part, particularly for the U.S. Treasury markets, the logic has a ring of truth. Take for example the weekly average returns against the price derivative of the iShares 20+ Year Treasury Bond (NYSE : TLT). A scatter-plot analysis reveals that the fund is a momentum market, one in which the probability of positive returns is higher if an investor buys into strength (for example, when a shorter moving average, such as the 50 DMA, crosses above the longer moving average, like the 200 DMA). Timing the market, or attempting to catch a falling knife, is statistically best done when the market has suffered a small bout of weakness. This reflects from an inverse perspective the observation that the bond market is a momentum market. However, not everything is as it seems. When observing data for weekly average losses against price derivative, there are two conspicuous trends. The dominant trend, as defined by the blue triangular shape, shows that as the market moves higher in valuation, the probability of absorbing a negative weekly return declines substantially. Yet the statistical outliers form a subdominant trend, one which contrasts sharply with the aforementioned probability. Here, we find that as valuation increases, the probability of suffering an extremely steep loss also increases. This may not be as disconcerting at face-value, since most markets that have gone on a strong run will eventually correct to the downside. But the real problem is that there are instances of significant volatility that occur within normal trading channels (ie. plus or minus one-percent swings). Such aberrant behavior should really occur within the extremes of the bell curve, not within the heart of it.

What does this mean for the bond market investor? While the general odds are in favor of those holding long-term bullish positions, there is a demonstrated possibility that the floor could suddenly give way, without any fundamental or technical indicator to suggest a market top or bottom. This makes the bond market paradoxically safe and dangerous, a condition that is presumably similar to the gold and silver complex. 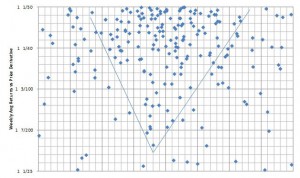 Of all the controversies and conspiracy theories regarding financial market irregularities, perhaps none receive as much attention and vitriolic indignation than the much cited gold market manipulation.