I penned “Bubblicious Housing – Having the Brains to Walk When It’s Time to Walk” back in April 2018, and it appears that housing is blowing up in bellwether markets. Within any bull market run or dead cat bounce, no matter the industry, there are opportune moments to make a move and capture the sweet spot rather than trying to capture a top, call a bottom, or escape a falling knife. That line of thought not only applies to the stock investor or trader, but also to the homeowner…

“…anyone sitting out there in an ‘overvalued’ property who does not care to own a pair of rose-colored glasses and has a desire and the means to take their money and run elsewhere to a more affordable and higher quality of life sooner, rather than later…” – TraderStef, Apr. 2018

It is almost time to shelter in place, as the opportunity for an exit is closing quickly. The following recent article excerpts, videos, and select charts populate a Twitter thread that originates from the article mentioned above, and I will only present a few that appeared since October. It is looking precarious. 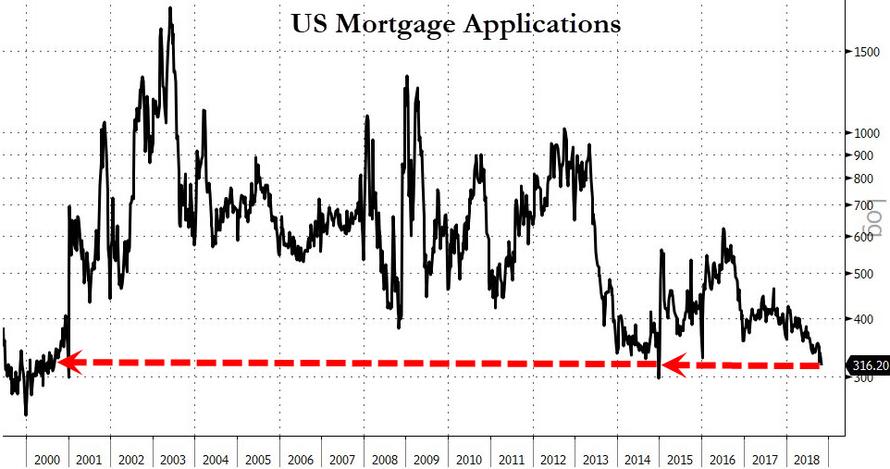 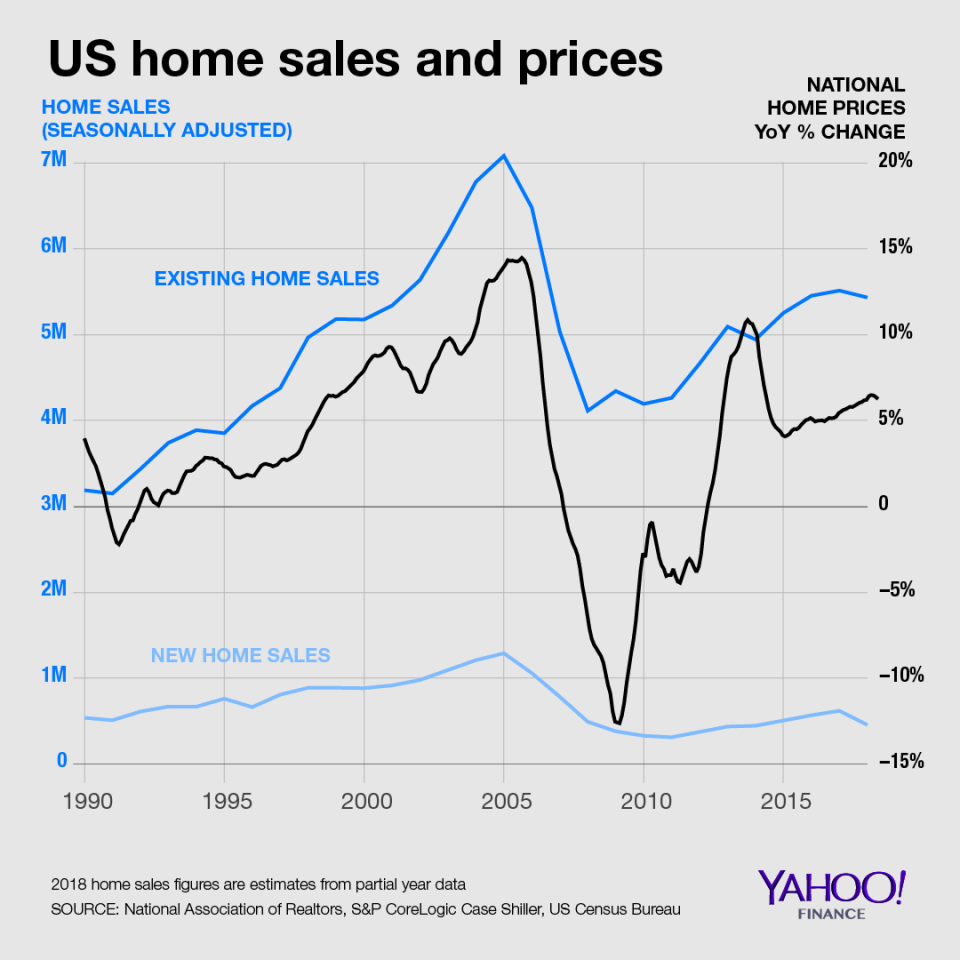 On Halloween, Sam Zell blew up the “demand causing a supply issue” fairytale that has dominated the mainstream goldilocks theme.

The problem with housing is prices recovered but demand hasn’t: Real estate mogul Sam Zell… “It’s interesting that all the statistics recently on housing suggest that demand is down but prices aren’t down. That does not necessarily make sense. We’re dealing with a changed housing market.” – CNBC, Oct. 31

Real Estate is the silent risk… “Many markets have already peaked. Case-Shiller Index lags by a year, because it’s a zip code, it does not show you what is happening in the zip code. That is an issue for the street, as they do not see the turn until its way too late; San Diego, San Francisco, Denver, New York. New York peaked two years ago in high end properties and we have an inventory glut.” – Christopher Whalen on Sprott Media – Oct. 22 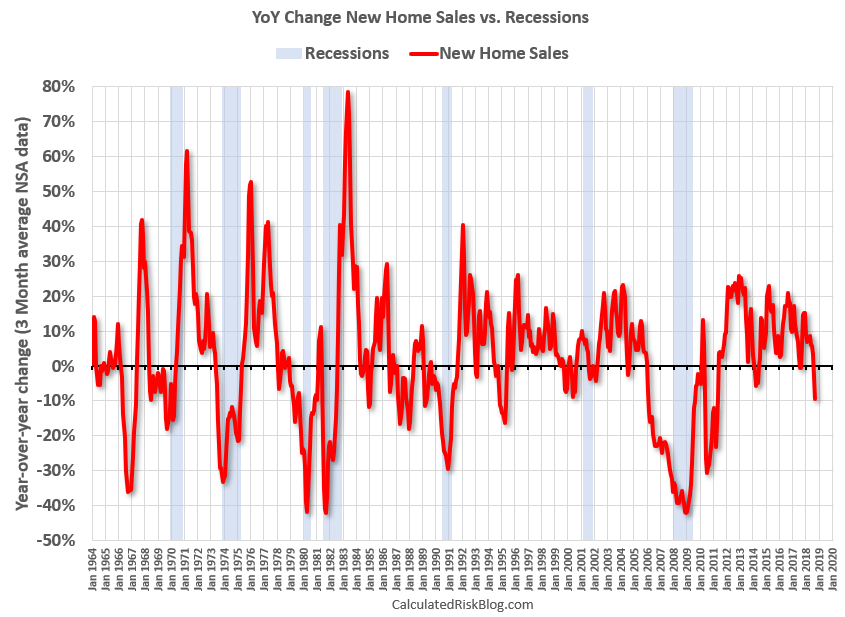 Existing Home Sales Drop For 7th Straight Month As Homebuilders Stocks Collapse… “Sales fell across all price ranges, not just the low-end as we have seen recently. And you can’t blame supply as it rose notably.” – ZeroHedge, Oct. 19 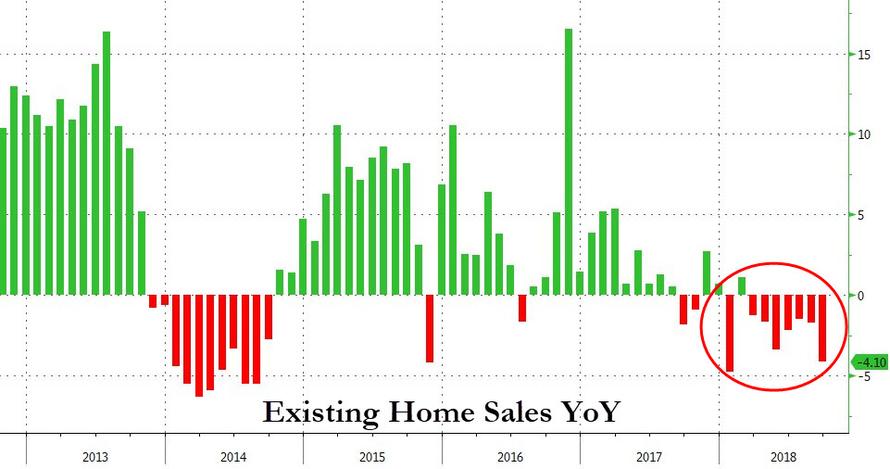 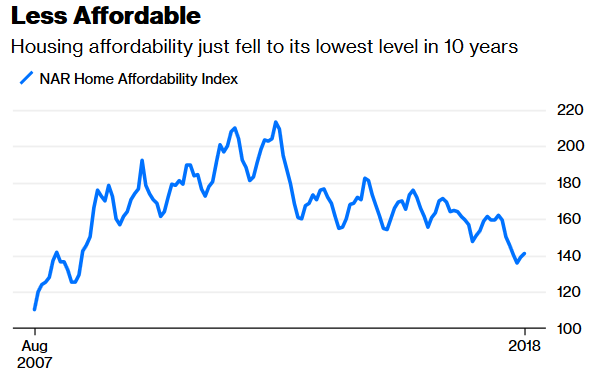 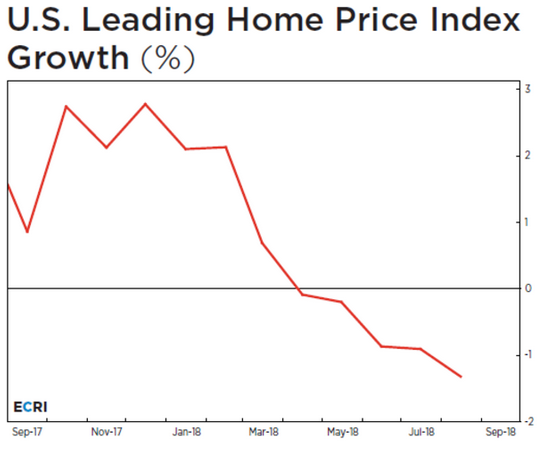 Is The NYC Luxury Real-Estate Market On The Verge Of A Full-Blown Collapse?… “What appeared to be an uncomfortable pullback in sales prices for luxury homes – spurred by a retraction in bids at a time of expanding supply – is now poised to metastasize into a full-blown market rout with implications beyond New York City.” – ZeroHedge, Oct. 15

The Housing Market Goes Down The Drain… “The Denver Post published an article last week titled, ‘Major cold front slams Denver housing market in September’ (note, weather-wise, September was one of the warmest and driest in many years). Single-family home sales in September plunged 30.5% from August and 21.7% from September 2017. Condo sales fell off a cliff, dropping 43% from August and 17.3% from August 2017. Normally inventory drops slightly in September. This year inventory in September soared. The median price of homes sold fell 3.8%. The article said the high-end of the market – homes worth over $1 million – fell 44.4% from August to September… Based on subscriber emails and articles I’ve read from around the country, the activity in the housing market nationwide is similar to Denver’s.” – Investment Research Dynamics, Oct. 5

Homebuilder stocks have been pummeled in 2018, but some have experienced a temporary reprieve over the last month. I do not believe for a minute that the bounce is sustainable due to the deterioration of underlying fundamentals in the housing market. There are 13 homebuilder stocks in the S&P Composite 1500, and as a group, they had an amazing return of 75% in 2017 and were ripe for correction no matter what signals the housing market may be giving.

I have chosen the following two charts to consider. They provide a visual of what the overall homebuilder sector currently looks like for investment and have daily volumes well above one million shares per day, which provide ample liquidity for the retail trader.

XHB weekly chart, Nov. 8 close – The SPDR S&P Homebuilders ETF generally corresponds to the total return performance of the S&P Homebuilders Select Industry Index. It generally invests 80% of its total assets in the securities comprising the index. The index represents the homebuilder segment of the S&P Total Market Index. Current holdings include 35 constituents. 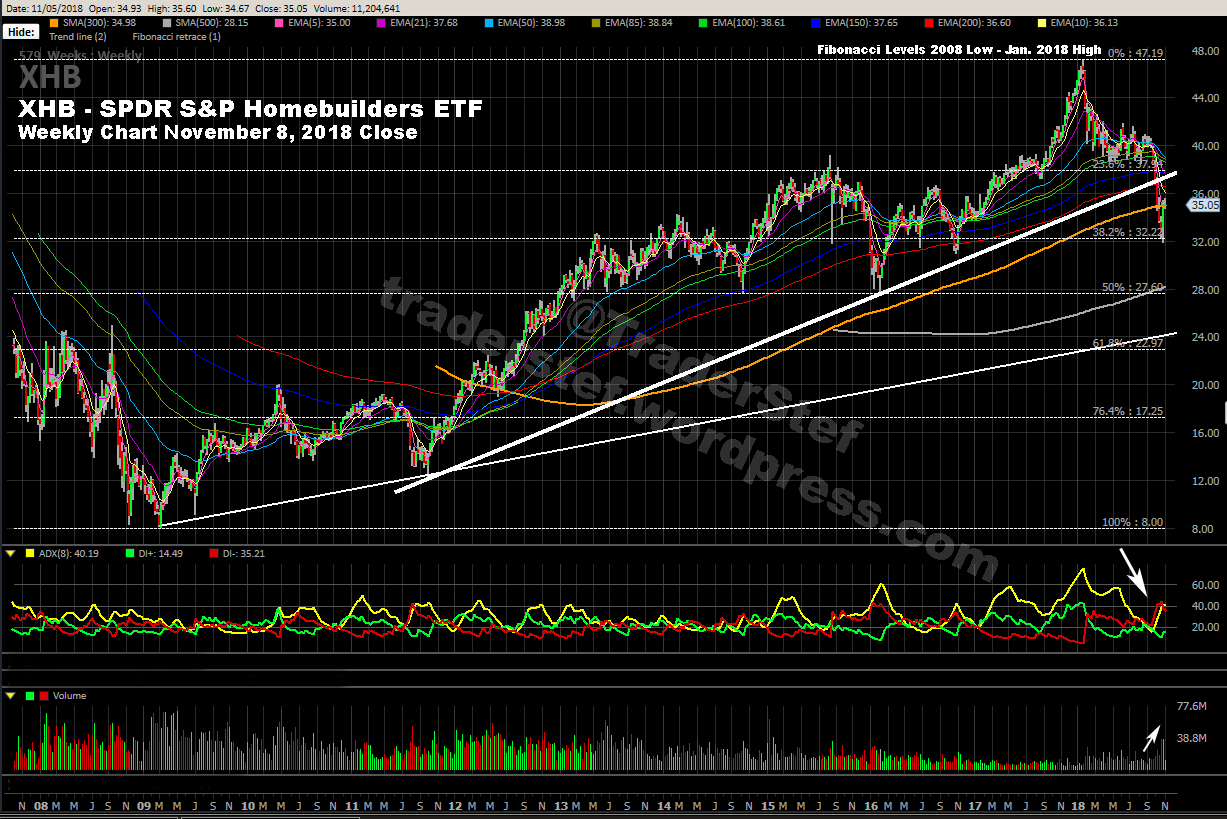 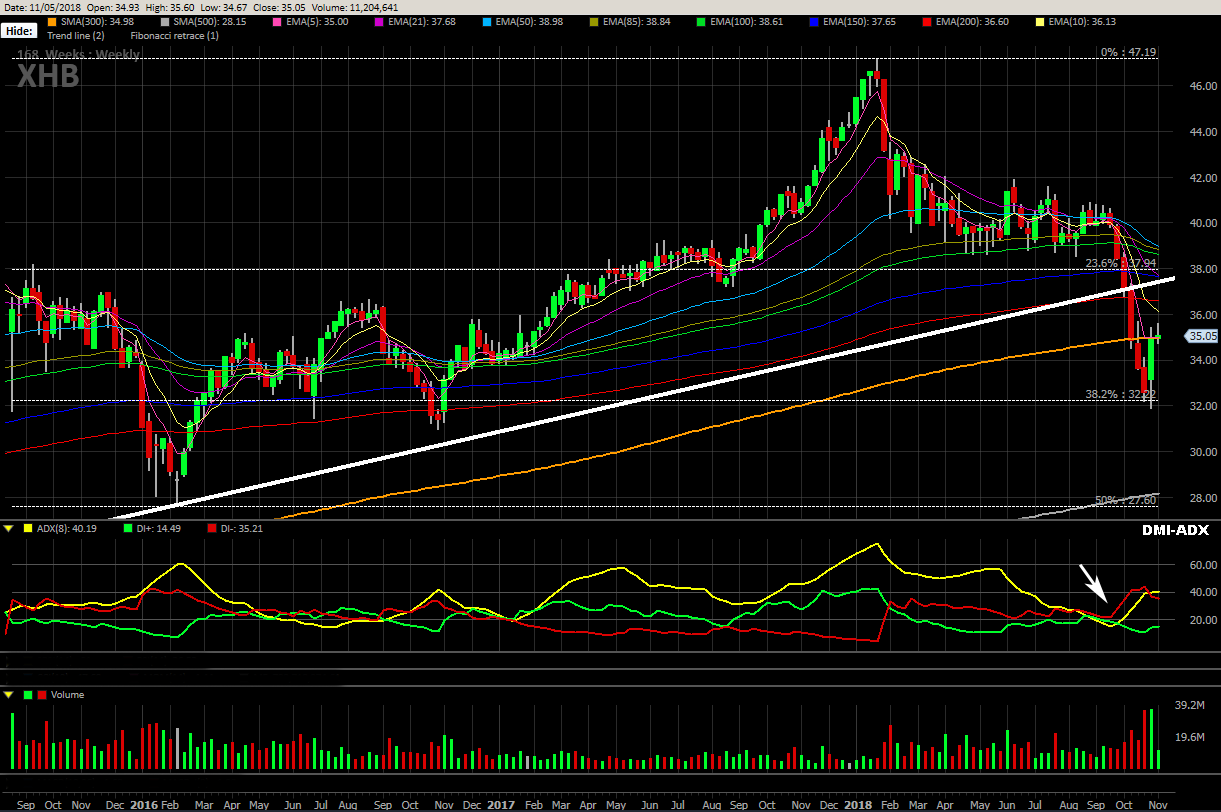 The first price plunge began in January, but a first close below the 50 Exponential Moving Average (EMA) did not occur until March, a couple weeks prior to my bubblicious call. The 23.6% Fibonacci level was decisively breached during the first week of October, and the lower trendline during the second week. The 300 Simple Moving Average (SMA) is currently acting as upside resistance, and support came in at the 38.2% Fibonacci level. The DMI-ADX remains in negative momentum but is leveled out for now, and volumes to the downside were large and rising throughout the price plunge, signifying a powerful move. I suspect a third wave down to the next Fibonacci level and 500 SMA may be taking shape.

ITB weekly chart, Nov. 8 close – The iShares U.S. Home Construction ETF seeks to track the investment results of the Dow Jones U.S. Select Home Construction Index composed of U.S. equities in the home construction sector. The fund generally invests 90% of its assets in securities of the underlying index and in depository receipts representing securities of the underlying index. The fund may invest the remainder of its assets in certain futures, options, swap contracts, cash, and cash equivalents. Current holdings include 47 constituents. 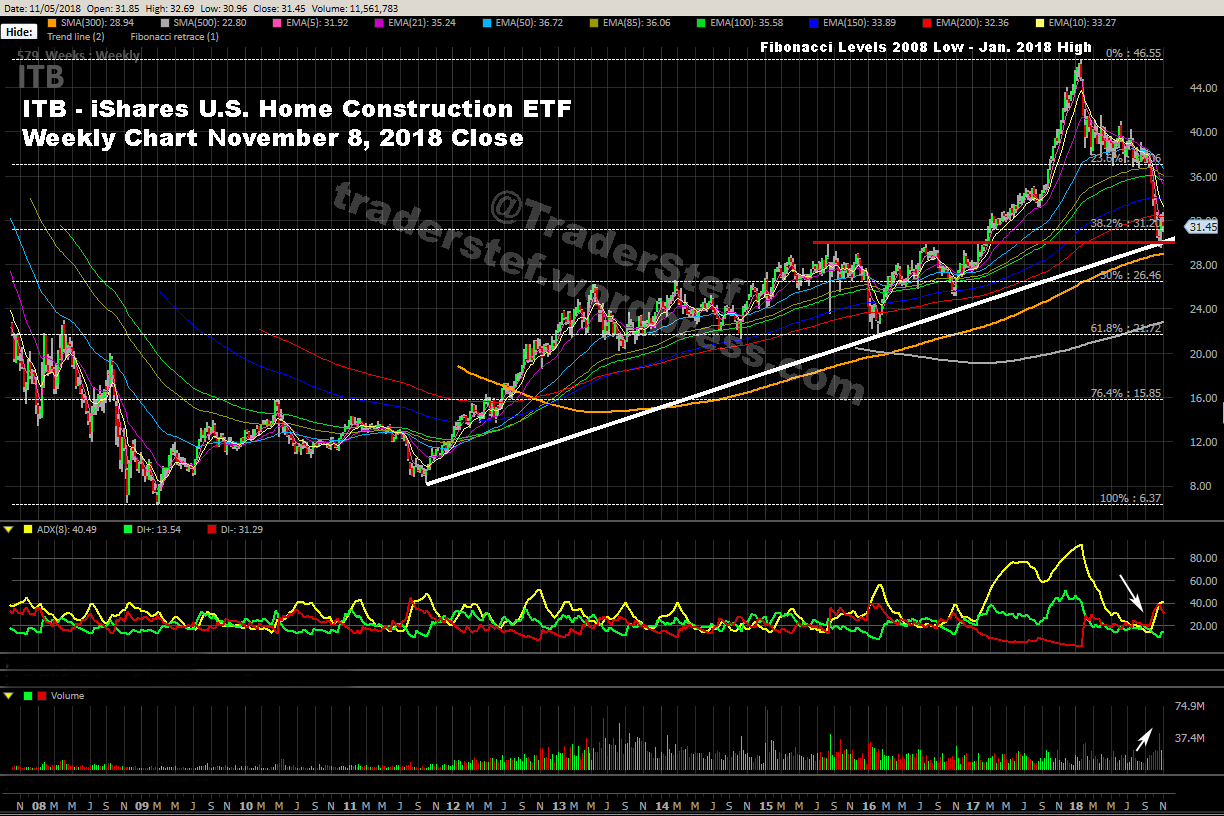 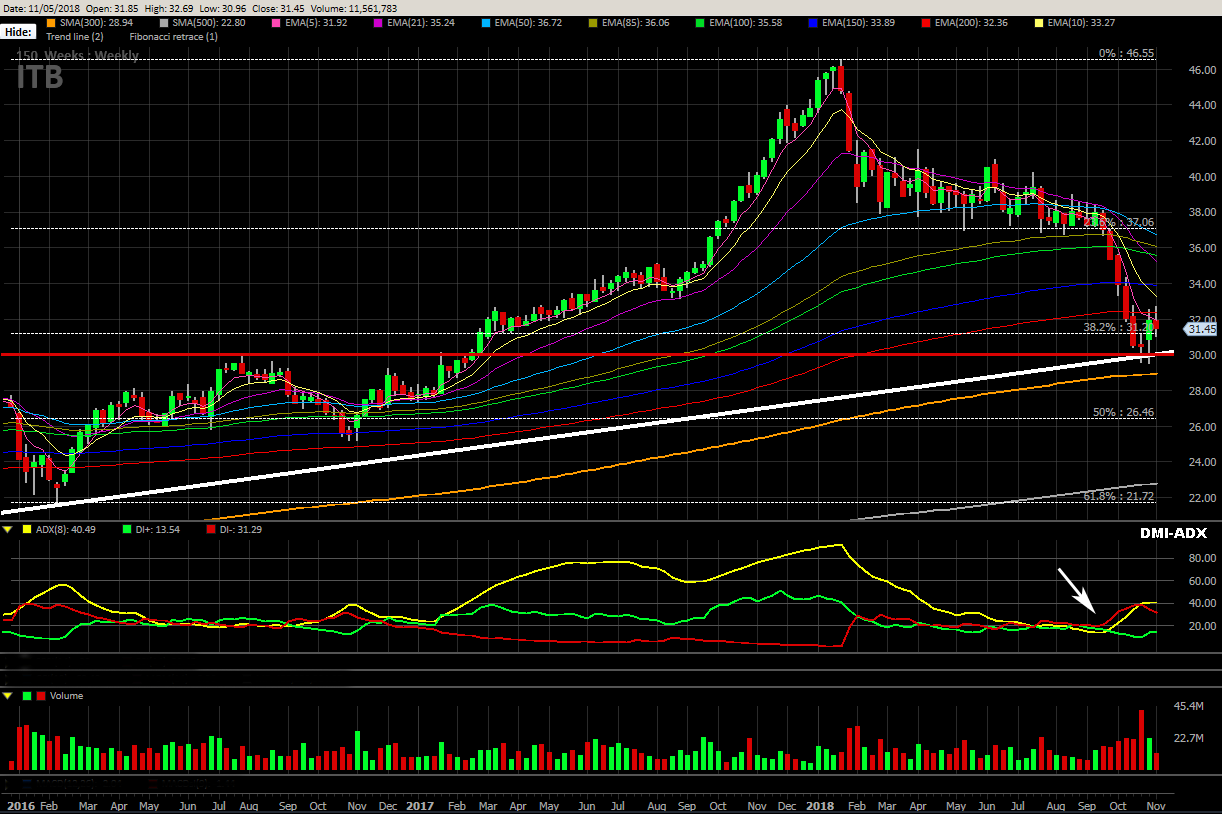 The first price plunge in ITB also began in January, but the first decisive close below the 50 EMA did not occur until mid-July vs. March with XHB. The 23.6% Fibonacci level was decisively breached during the last week of September vs. October with XHB, and the lower trendline is not yet breached. Price support came in at the confluence of that lower trendline and the neckline (horizontal red line) of an Inverse Head & Shoulders drawn back from 2015-2016. I suspect the underlying strength with ITB at this price level vs. XHB is attributable to the confluence of the neckline, lower trendline, 38.2% Fibonacci level, and its larger number constituents providing diversity in the basket. The 300 SMA is only a stone’s throw from the current low. The DMI-ADX remains in negative momentum but leveled out for now, and volumes to the downside were large and rising throughout the price plunge, signifying a powerful move. I suspect a third wave down through the 300 SMA and to the next Fibonacci level may be taking shape.

A lesson on walking from danger in one of my favorite films.