Fundamental issues surrounding cocoa and technical signals on the futures price chart may portend a rally beginning this summer and fall, which is unfortunate for chocolate lovers and chocoholics.

The cocoa crop in Ghana and the Ivory Coast in West Africa are responsible for more than half of the cocoa production in the world. Other producers along the equatorial region include Brazil, Cameroon, Ecuador, Indonesia, Malaysia, and Nigeria. Europe is both the largest total importer of cocoa and the largest processing region, but Asian demand may take the lead over Europe as production out of the Indonesian region is unable to meet a growing Asian demand.

Cocoa has a wide variety of uses that are not limited to chocolate, cocoa butter, and coloring agents for food products. Despite being one of the world’s smallest soft commodity markets, there are global implications for importers and exporters, food and candy producers, and the retail industry.

Asia’s top chocolate producers, including Malaysia, can’t meet growing demand… “Demand from Asia’s growing legions of chocoholics has outpaced the ability of local farmers to supply cocoa beans, prompting a surge of shipments into the region from Africa and South America. Indonesia, the top producer and processor in the area, imported about 240,000 metric tons of beans last year, a record, and may buy more in 2019. Malaysia boosted shipments 10% to 345,000 tons last year. In Malaysia, there’s a similar tale, with output dwindling to less than 1,000 tons from around 100,000 tons two decades ago.” – Bloomberg, May 27 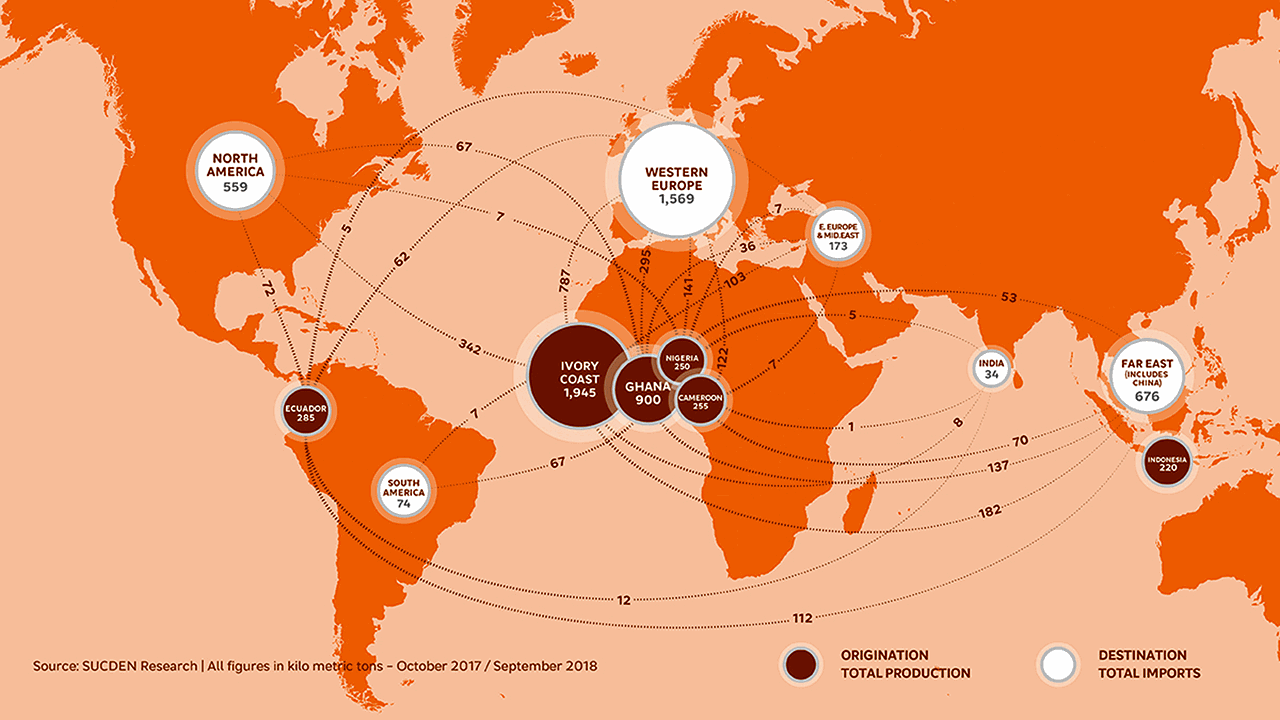 The Story of Chocolate: Unwrapping the Bar

A niche developing in the chocolate market is a demand for cocoa nibs, which are chocolate in its purest form. Cocoa nibs are dried and fermented bits of cocoa beans that go through less processing without unhealthy additives and preserving naturally-occurring nutrients in the bean. The nibs offer a concentrated source of antioxidants, fiber, iron, and magnesium, as cocoa provides a variety of potential health benefits, such as stabilizing blood sugar, reducing depression, and reducing the risk of cardiovascular disease and cancer. Cocoa and chocolate are attracting a larger consumer base around the world due to its reported nutrition and medicinal benefits.

Cocoa and Chocolate Market Increasing Demand and Research, Global Trend, Growth Opportunities Forecast till 2025… “The Global Cocoa and Chocolate Market are likely to grow at a healthy rate in the forecast period, with impetus from recently discovered health benefits and increasing use of healthy ingredients for manufacturing. According to a report published by Fortune Business Insights, titled ‘Cocoa and Chocolate Market Size, Share and Global Trend By Product Type (Cocoa Butter Cocoa Liquor, Cocoa Powder, Dark Chocolate, White Chocolate, Milk Chocolate, Filled Chocolate), Application (Food and Beverage, Cosmetics, Pharmaceuticals), Distribution Channel (Hospital Pharmacy, Retail Pharmacy, Clinics, Online Channel, Public Channel and NGOs) and Geography Forecast till 2025.’ The market was valued at US$ 43.13 billion in 2017 and is predicted to grow at a rate of 5.7% and will be valued at US$ 67.22 billion by 2025.” – NBC29, May 28

There are growing concerns that the negative economic impact of swollen shoot virus, which is already affecting small family farms and large plantations in Ghana and the Ivory Coast, may worsen due to an El Nino weather pattern in the Pacific Ocean. El Ninos can create drought conditions in West Africa, but that scenario may not occur if sea surface temperatures rise in the tropical Atlantic as predicted for this season.

El Niño Could Bring Drought and Famine in West Africa…  “A place that’s really important to stress is west Africa, where there is increased risk of drought during El Niño.” – Climate Central, May 2015

Ghana Likely to Delay Some Cocoa Deliveries as Disease Worsens… “Ghana’s cocoa regulator is facing a shortage of beans to meet all its sales commitments as Swollen Root Disease is affecting more of the crop than previously estimated… The current outbreak in three of Ghana’s biggest planting areas is particularly devastating… a chief producer who supervises 16,000 small-scale growers near the southwestern border with Ivory Coast said ‘two-thirds of the tree stock in the district have to be cut down.’” – Bloomberg, May 21

Meanwhile, in the U.S., Blommer Chocolate Company is the largest cocoa producer and ingredient chocolate supplier in North America and was just sold to Japan’s Fuji Oil Holdings. I expect to see additional acquisitions and investment within the cocoa industry by Asian investors.

If you are not a trader in the futures exchange, where each contract of cocoa represents 10 metric tons, here are a few alternative avenues for investment to consider: 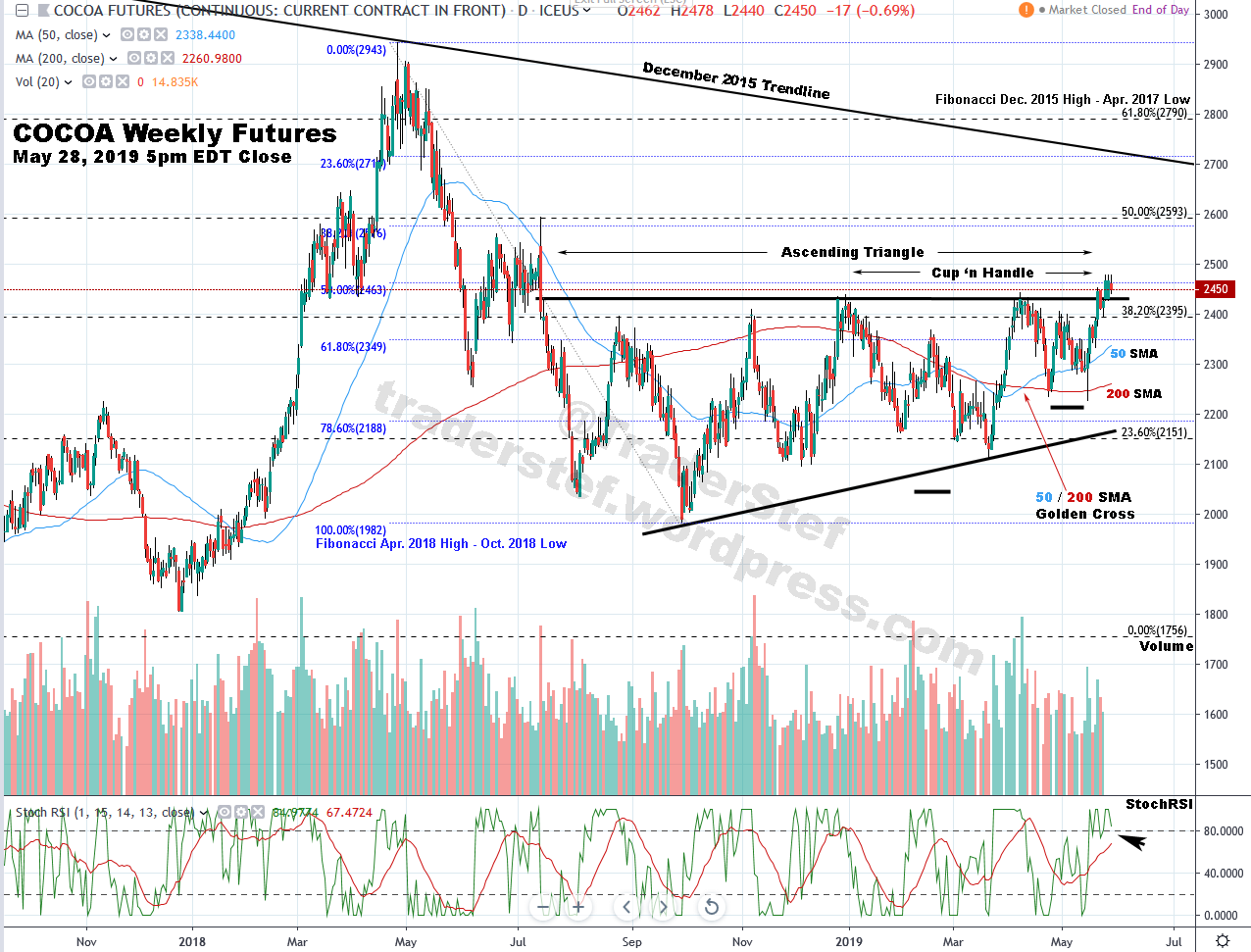 An Ascending Triangle drawn back from the summer of 2018 dominates the chart, along with a Cup ‘n Handle formed in 2019 with a break above its Neckline and the Ascending Triangle’s topside trendline last week. The breach is not decisive at this point and there is resistance at the 50% Fibonacci level drawn from the Apr. 2018 high and Oct. 2018 low. A bullish 50/200 Simple Moving Average (SMA) Golden Cross occurred in early April. With the price extended above the 50 SMA and the StochRSI hovering in overbought territory, patience is required to see if the price holds above the Neckline with an increasing buy volume pattern. If the price continues on an upward trend, the next price target is the 50% Fibonacci level drawn from the Dec. 2015 high and Apr. 2017 low, then the topside trendline drawn down from the Dec. 2015 high. The chart is bullish but requires decisive buying above the Triangle and Neckline to solidify the move.